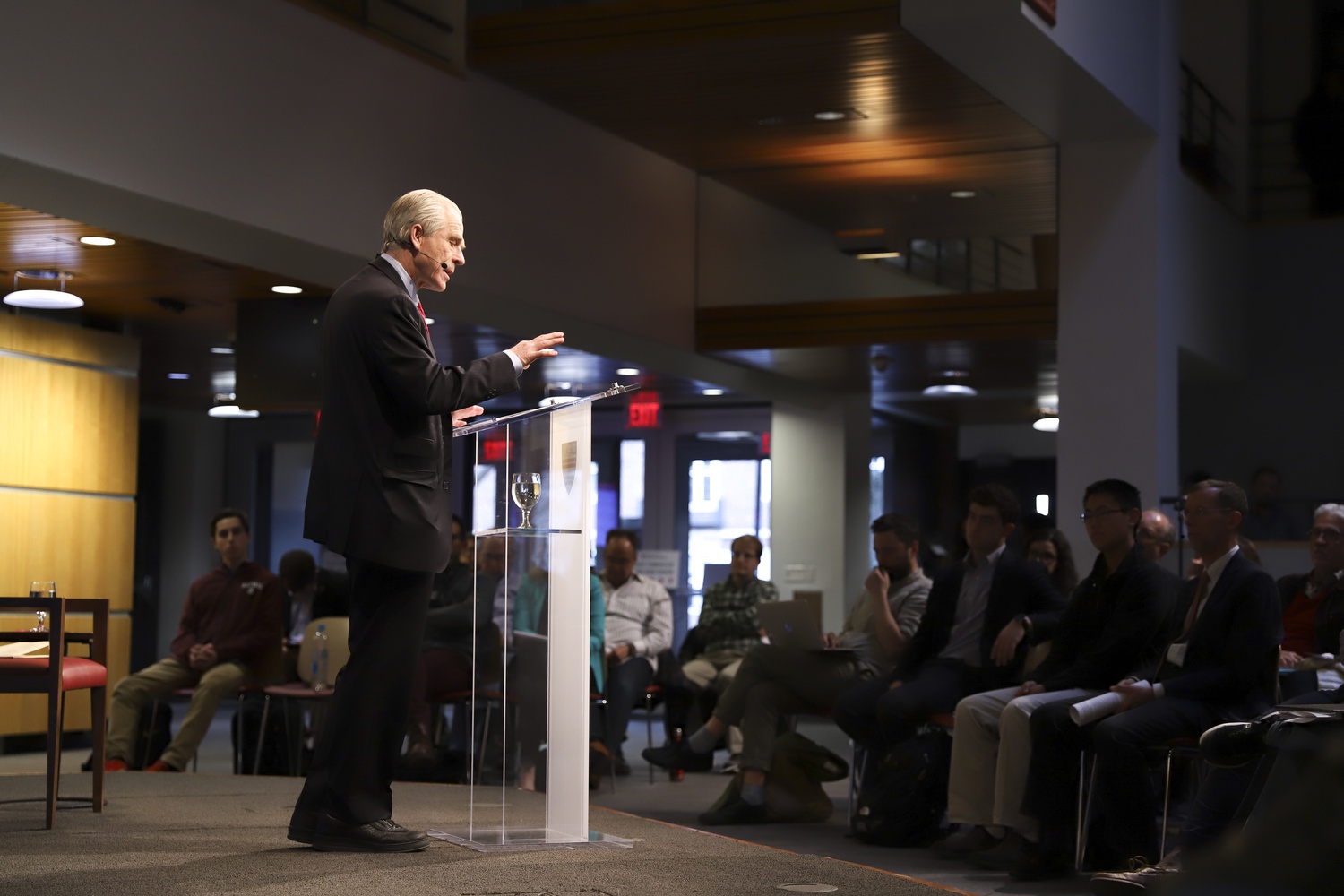 Dr. Peter Navarro, Director of the White House Office of Trade and Manufacturing Policy, speaks about US trade policy at the Institute of Politics Thursday evening. By Kathryn S. Kuhar
By Danielle J. Kranchalk, Contributing Writer

Navarro, who also serves as assistant to United States President Donald Trump, outlined the trade policies he is pursuing under Trump and challenged economic principles taught at Harvard during his presentation entitled, “Ricardo is Dead. Long Live Fair, Balanced, and Reciprocal Trade.”

Navarro, who earned a Ph.D. from Harvard in 1986, focused his presentation around three points of advice for Harvard students: cherish time at the school, stay flexible in learning, and seek information outside what is taught at the University.

“The real payoff comes from leveraging the resources of this university to broaden and deepen your toolbox and from establishing those networks that are going to be so valuable to you over the course of your career,” Navarro said.

“At least some of what you will be learning at Harvard today will certainly be wrong tomorrow as time, tides and technology change,” he added.

With regard to his third point — looking beyond Harvard’s gates for knowledge — Navarro pointed to what he calls an out-of-date trade theory taught in collegiate economics curricula.

“Some of the conventional wisdom you will learn at Harvard, particularly in the area of international trade, is at best outdated and at worst misleading,” he said.

That wisdom Navarro referred to was the free trade theory of 19th century British economist David Ricardo, which Navarro criticized as having “little or no relevance” to the way trade is actually conducted in the world.

Navarro said that a system of non-reciprocal international tariffs has led to many Americans facing higher taxes on their exports than the country levies on its imports.

“America, the piggy bank, will continue to be plundered by a trade deficit that transfers more than half a trillion dollars of American wealth a year to foreign lands,” Navarro said.

“The linkage I’ve just made between unfair trade practices and the trade deficit is not accepted by the economics profession,” Navarro added. “The Trump administration has become a positive if disruptive force in moving a broken world trading system much closer to the textbook ideal of fair, balanced, and reciprocal trade.”

“It helps, especially in a place like Harvard, where there is a general consensus towards a more liberal economic international order, and especially with all the changes going on in the world and certainly what the Trump administration is doing, to understand why they're doing it and the rationale and the perspectives justifying it, whether one agrees or not,” Wang said.

Stefanie Rosskopf, a master’s student at Tufts University who attended the talk, said she does not agree with Navarro’s views on trade policy.

“This whole discussion about trade deficit I find a little too over-simplistic the way its portrayed,” Rosskopf said. “If you look at trade in a more holistic [way], it kind of balances out over time.”