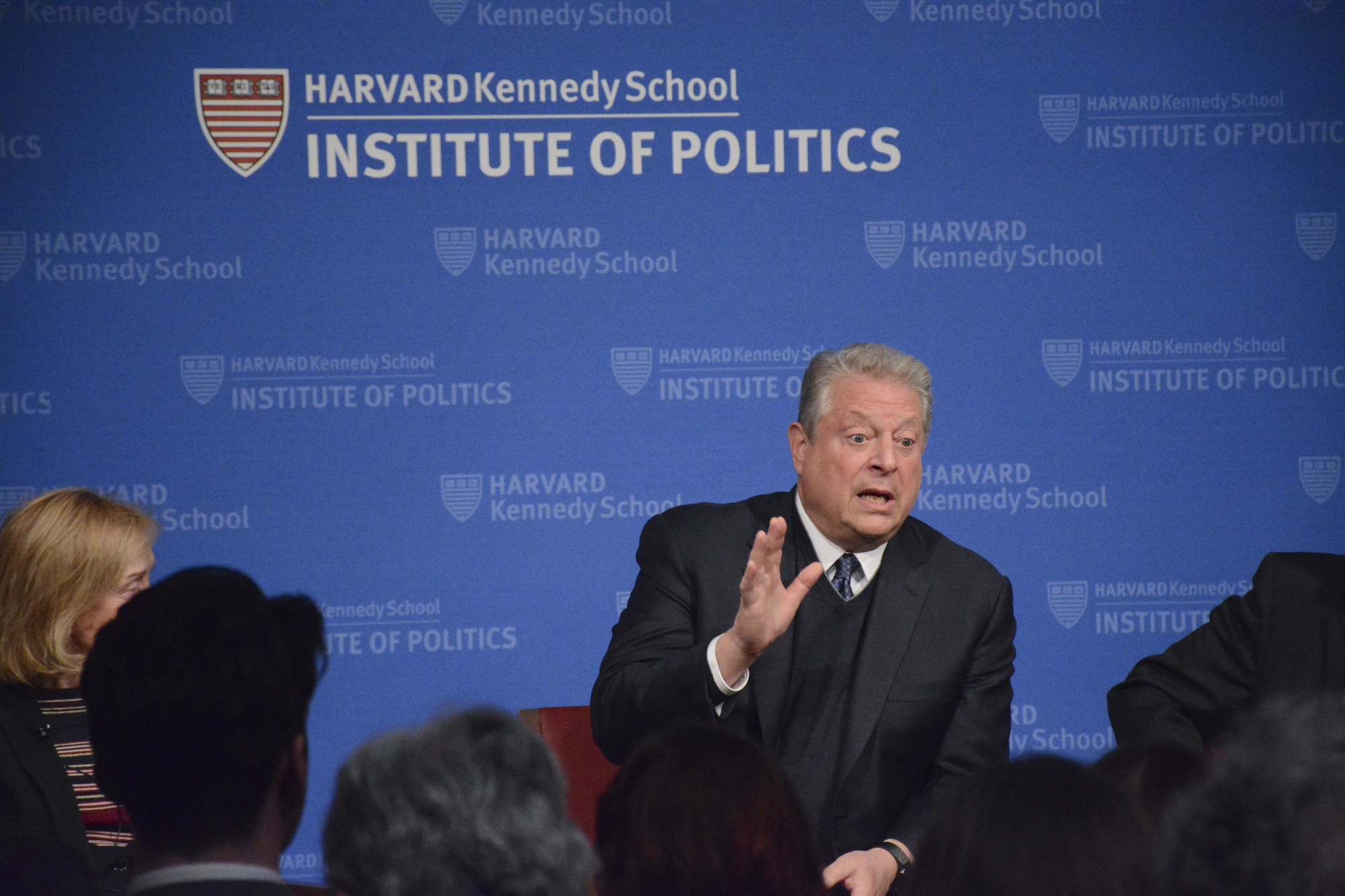 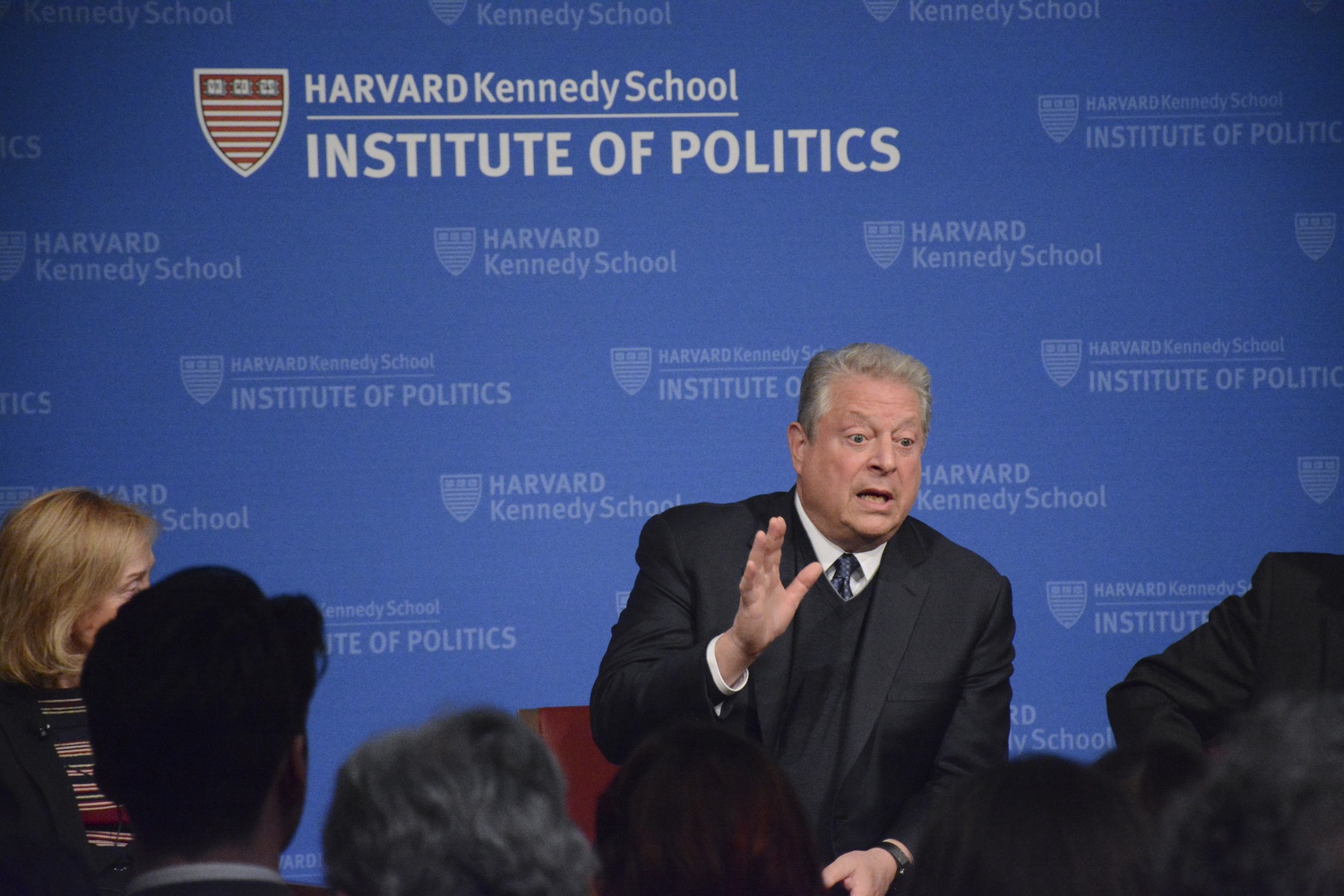 Former Vice President Al Gore spoke at the Institute of Politics's "The American Presidency in the 21st Century" event on Monday evening. By Camille G. Caldera

Before the event began, Kennedy School Dean Douglas W. Elmendorf discussed the right of free speech in the wake of student protestors' interruption of a talk featuring University President Lawrence S. Bacow last week. The demonstration, put on by fossil fuel and prison divestment activists, resulted in Bacow and his fellow speakers leaving the John F. Kennedy Jr. Forum and continuing the event in a classroom.

In front of a packed crowd, Gore told audience members that the status quo is “not normal” while speaking on a panel entitled “The American Presidency in the 21st Century” at the Institute of Politics Monday evening.

“Uniquely, President Trump has persistently followed a strategy of ignoring, for the most part, those outside of his base and has concentrated on keeping his base in a high fever, in a state of agitation and enthusiasm for him standing against everybody who’s outside the base,” Gore said. “That is something radically new in the American presidency.”

“The very fact that we have gone more than 40 years with no increase in real take-home pay for middle class Americans is the most salient fact explaining what is going on right now,” Gore said.

Hosted in honor of the hundredth birthday of Richard E. Neustadt — the first director of the IOP, a professor at the Kennedy School, and a renowed political scientist — the panel also featured historian Doris K. Goodwin, Kennedy School professor Roger B. Porter, and former Harvard provost Harvey V. Fineberg ’67. Neustadt advised five presidents before passing away in 2003.

"You have to look back to history to get some help for the present. It seems to me the real echo of what we're in now is the turn of the 20th century. The industrial revolution had shaken up the economy, much as the tech revolution and globalization have done,” she said. “But what helped us through that was a movement among the citizens, the progressive movement.”

“I think that’s still the answer for us today. Every change in the country comes from the citizens up,” she added.

Gore also noted the importance of the “printed word” throughout American history.

“I think for most of our country's existence, we really took for granted the extent to which the printed word informed all of the deliberations of our founders and all of the practices and culture of self-governance,” he said.

In explaining his fears about social media, Gore mentioned shortening attention spans and increasing amounts of content vying for that attention.

“The kinds of meetings, the kinds of civic associations, the kinds of conversations across the backyard fence that used to take place are now displaced all too often by entertainment, and cat videos, and memes of all sorts,” Gore said.

“In order for the promise of representative democracy and self-governance to be redeemed in the twenty-first century, we have to find that the majority of people are willing to devote time and attention to the role of the citizen in the self-governing process,” he added.

In his remarks before the event, Elmendorf read the University-Wide Statement on Rights and Responsibilities to attendees and followed with his own words on the topic of freedom of speech.

"Here at the Kennedy School each of us exercises our freedom of speech by talking in turn and listening when it’s other people’s turns," Elmendorf said. "Such civil discourse is essential to our learning and we insist upon it in classrooms, in hallways, and most definitely here at events in the forum. Without the chance for members of our community to hear and be heard we would be a much poorer place.”

Elmendorf went on to say that anyone who disrupted the program would be asked to leave and would be "subject to appropriate disciplinary action in their school."