The 9th Inning That Never Ended: An Oral History of How Harvard Beat Yale

And, fittingly, McColl replied to the storybook situation with a fairy-tale ending, crushing a no-doubt grand slam to right-center to send the Crimson to a walk-off 10-8 victory.
By Jackson Delgado and Amir Mamdani 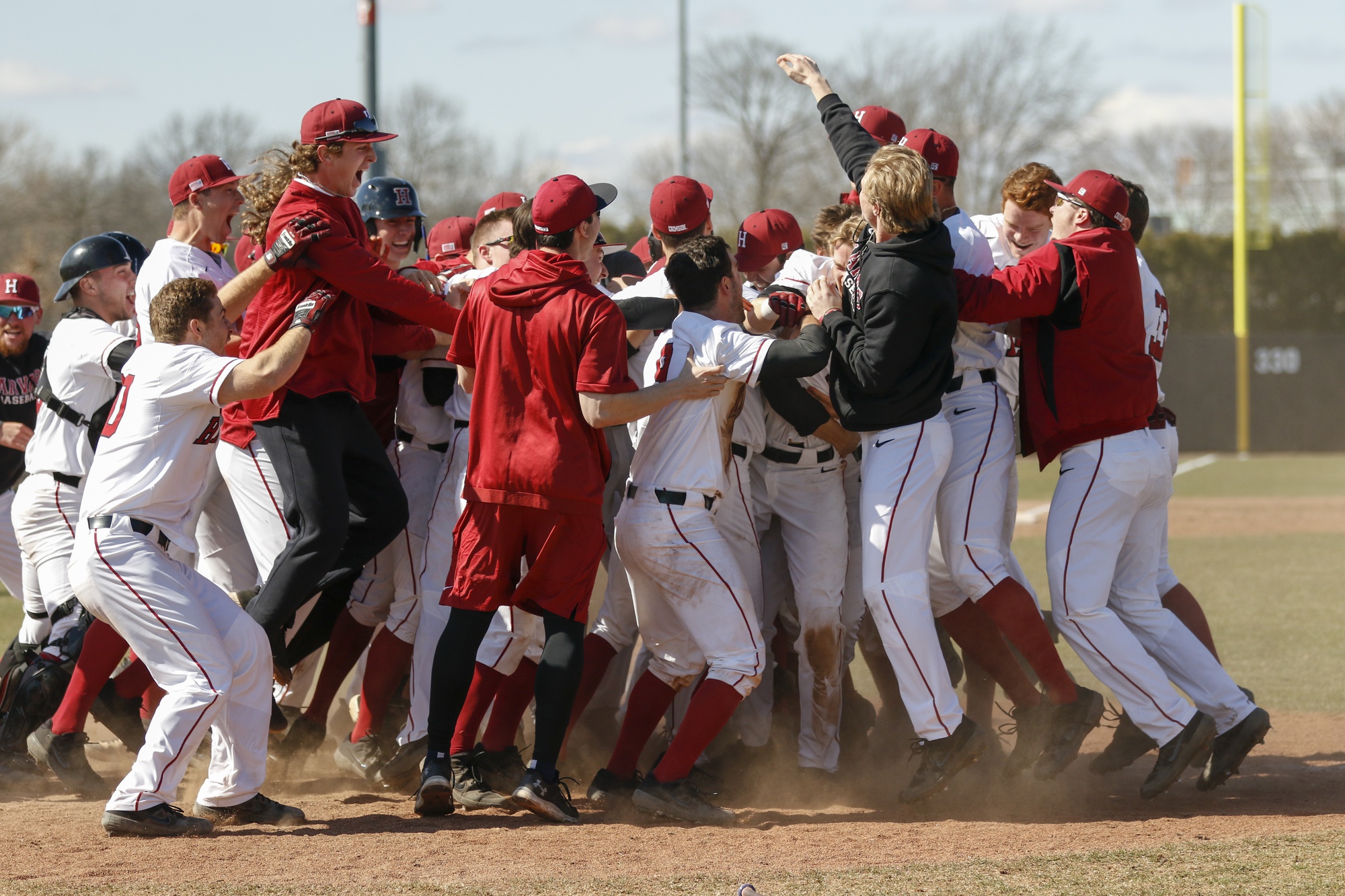 The team celebrates after a nine-run, ninth inning to take the first game against Yale. By Timothy R. O'Meara

When senior infielder Edwin Owolo walked to the plate to lead off the bottom of the ninth inning, the outcome of the first half of a doubleheader against Yale on Saturday afternoon seemed a foregone conclusion. Harvard baseball had notched just a single first-inning run, and trailed 8-1 entering the final frame of play.

Owolo, who replaced Quinn Hoffman as a pinch hitter, worked a walk, spurring one of the most incredible innings in Crimson history.

Junior pitcher Kieran Shaw: We felt confident going into the game. We knew that Hunter was on the mound and he’s our guy, but things just spun out of control in a couple of innings.

Head coach Bill Decker: Our guys grinded a little bit today. Bigge didn’t have his great stuff but he gutted it out for 120 pitches and Jack kept it there. Then we played a little bit cleaner. 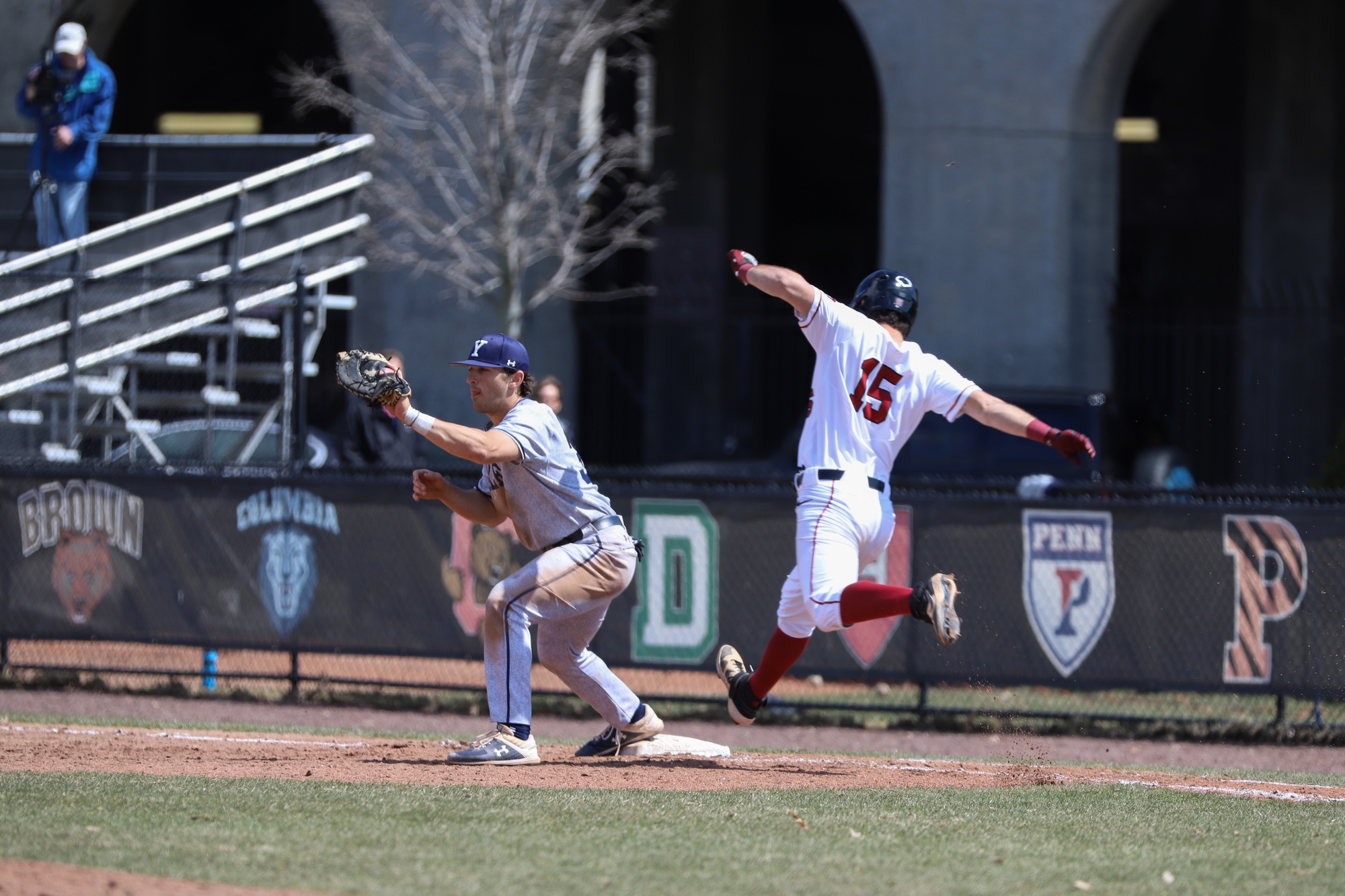 The Crimson languished offensively for much of the game, putting up just one run prior to the ninth inning. By Quinn G. Perini

Starter Hunter Bigge labored through seven innings, exiting with Harvard trailing by a 7-1 scoreline. When sparingly-used sophomore reliever Jack Mahala entered the contest, the Crimson’s odds seemed long. But the Far Hills, N.J., native kept Harvard close enough, yielding a lone run across his two innings of relief. Mahala’s outing set the stage for a comeback that stunned everyone, with the exception of the men in the dugout.

Shaw: We were running back to the dugout in the bottom of the ninth saying “if there’s a time, why not now?” We just wanted to go get it. We watched a couple of guys get a couple of hits, and there was no telling what could happen. 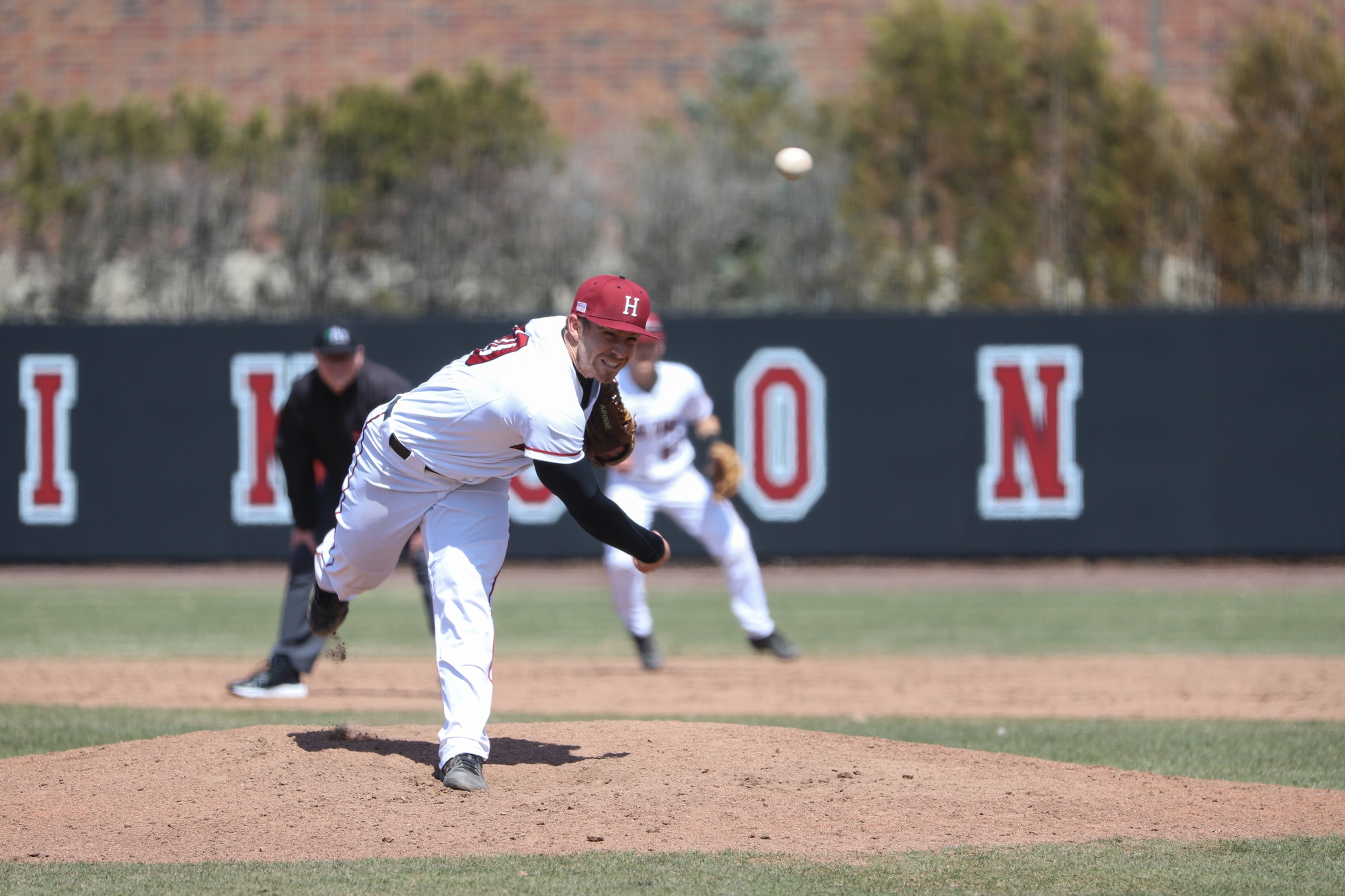 Starting pitcher Hunter Bigge logged seven innings in the contest, but allowed seven runs in the process as well as eight hits. By Quinn G. Perini

Junior infielder Chad Minato: We were just trying to get guys on base, and we just kept going and going and going. And then we were like “Oh my gosh - we are actually right back in this game.”

After drawing his walk to lead off the inning, Owolo scored when Bigge drew a base-on-balls with the bases loaded. Minato followed that up with a single that scored two, closing the deficit to 8-4.

Owolo: We just went up there aggressive in the ninth inning and we got guys on. We started making things happen, and there’s no telling what we can do when we get hot.

Senior first baseman Patrick McColl: We start with a pinch hitter, and we tried just to get a little rally going. We got four straight on, and after we scored three runs, we were thinking “hey, there’s something going here.” 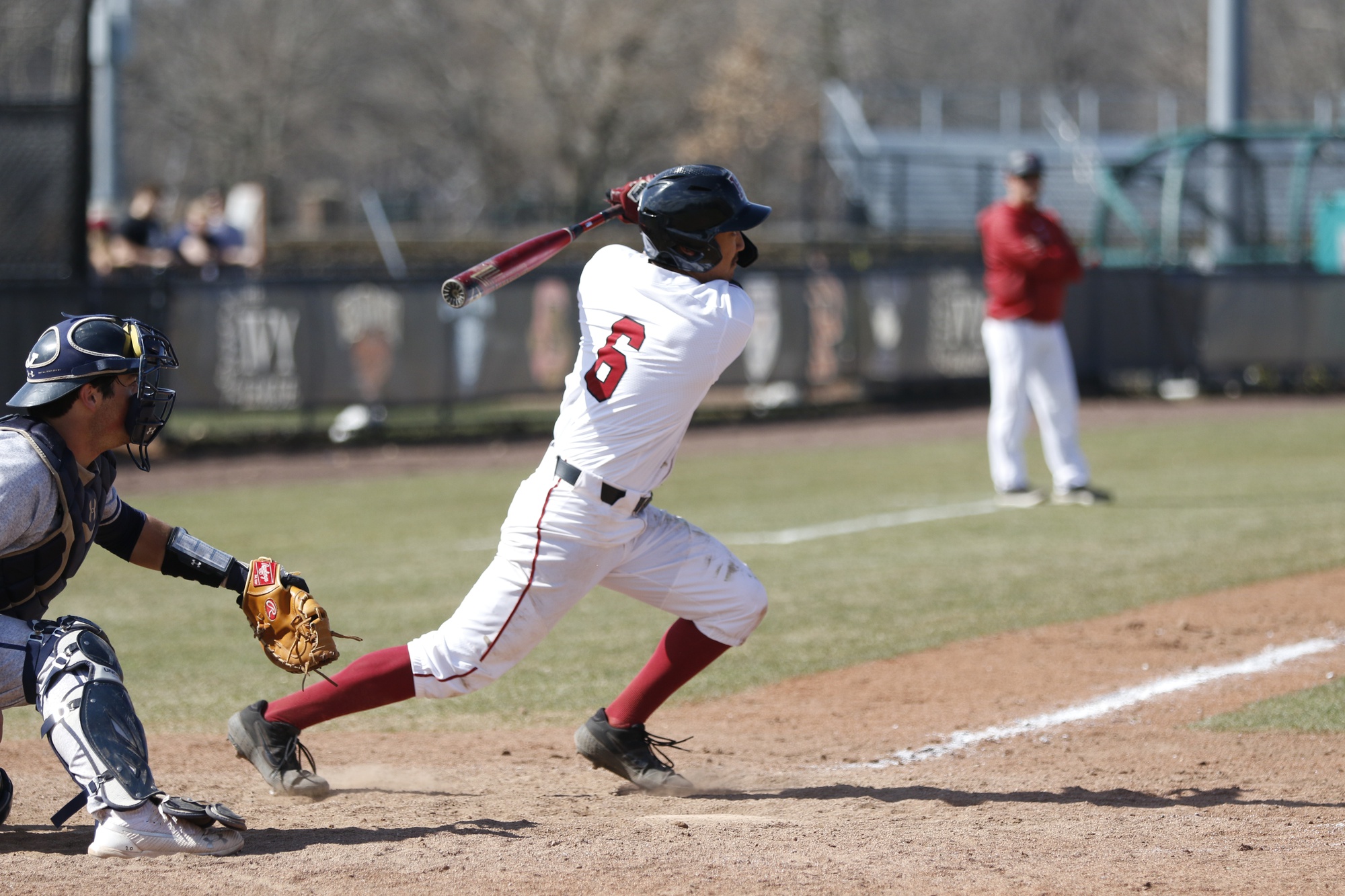 Chad Minato delivered a critical hit mid-way through the rally to add two more runs on the board. By Timothy R. O'Meara
Advertisement

Mrwoka’s at bat, though, was one of the most crucial of the entire game. With two outs, he was pinch-hitting for Owolo, who had been inserted into the lineup earlier in the very same inning. The sophomore patiently worked a walk, waiting out Yale’s Bobby Cecere and juicing the bases.

Coach Decker: It’s just one of those things where you get a guy on and you just try to keep the line moving. I thought our guys had really good at bats. Eddie led it off and then Pat and Sudsie, and we had a big at-bat by Mrwoka in my opinion. He was being patient and brought in a couple of side guys.

Senior Devan Peterson added another run to the Crimson tally with a pinch-hit single, and Minato himself eventually scored off of a single from senior Ben Skinner that brought the score to 8-6.

Mrwoka: We had a lot of good, patient at-bats. We worked counts and got on base, and then we gave it to the big guy who took care of us.

Mrwoka’s base-on-balls brought up Pat McColl, the senior whose torrid start to the season has been one for the ages. McColl, the leading hitter in the entire conference, stepped to the plate in the situation players can only dream about — bases loaded, two outs, bottom of the ninth inning.

Coach Decker: And then, it was just set up. You have Pat, your three-hole hitter, and he’s been doing such a great job for us not just this year but for four years.

And, fittingly, McColl replied to the storybook situation with a fairy-tale ending, crushing a no-doubt grand slam to right-center to send the Crimson to a walk-off 10-8 victory. 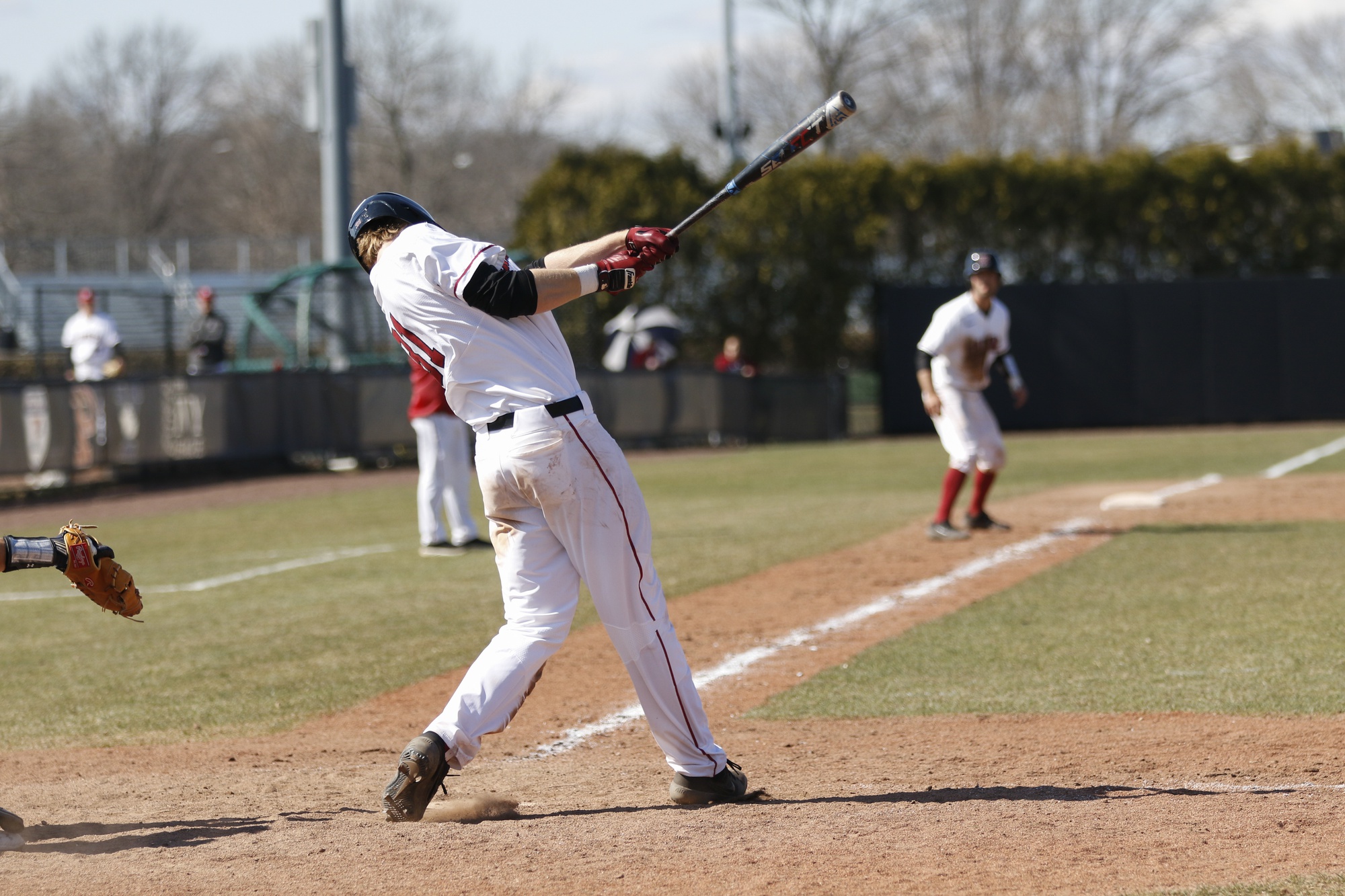 Pat McColl currently leads the conference with a batting average of .459. Earlier in the season, he held the nation's highest mark in this category. By Timothy R. O'Meara

Mahala: That was one of the craziest baseball moments I’ve ever experienced. That was just unbelievable, a never give up attitude. We never had a doubt when McColl came up to bat. I was like “this is going to be a home run.” And he delivered - it was unbelievable.

Freshman pitcher James Kirkpatrick: It was crazy. Everyone contributed, and Pat’s been our most reliable hitter all year. So when he got up, we were all pretty hyped. He was just so clutch. It was the most exciting baseball game I’ve ever been a part of.

Owolo: Nobody could really have scripted that. It was insane. That was definitely the greatest thing that I’ve experienced in a Harvard crimson uniform.

Just over three hours later, Harvard put the finishing touches on a 3-0 win in the second game of the double-header, but all anyone could talk about was McColl’s magical moment.

Junior outfielder Jake Suddleson: It’s hard to put into words. I mean, that only happens in backyard baseball. You can’t make that up. It was something that I think all of us will cherish for a really long time. There’s nobody else that we’d want in that spot other than Pat, and he came through. It was awesome. 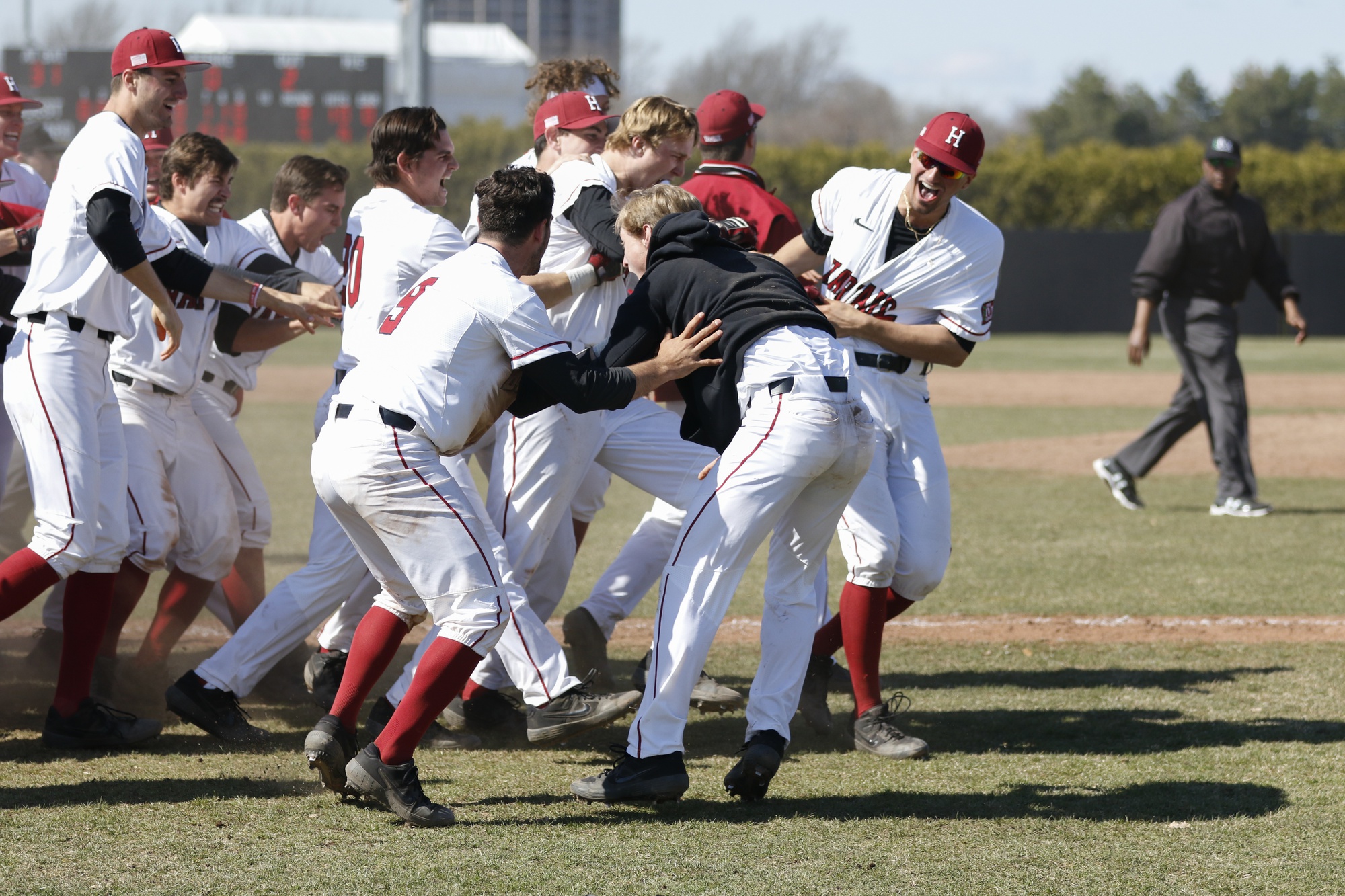 The team embraces McColl after the miraculous finish to the ballgame. Harvard would go on to win the second game of the doubleheader, but fell on Sunday in its sweep bid. By Timothy R. O'Meara

McColl: That was crazy. It was the most fun baseball day, probably ever.