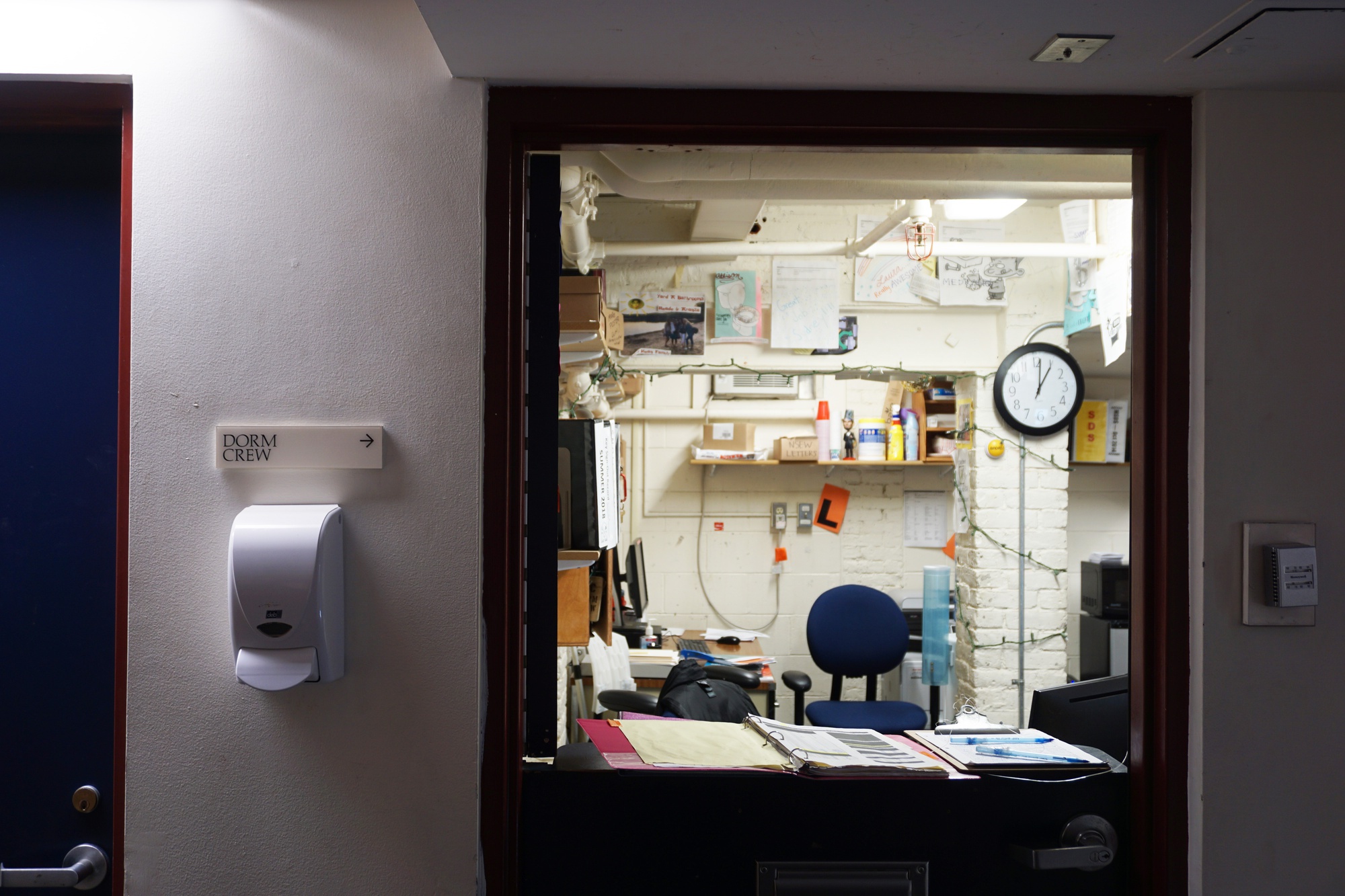 The Dorm Crew office is located in the basement of Weld Hall.
By Shera S. Avi-Yonah and Delano R. Franklin, Crimson Staff Writers 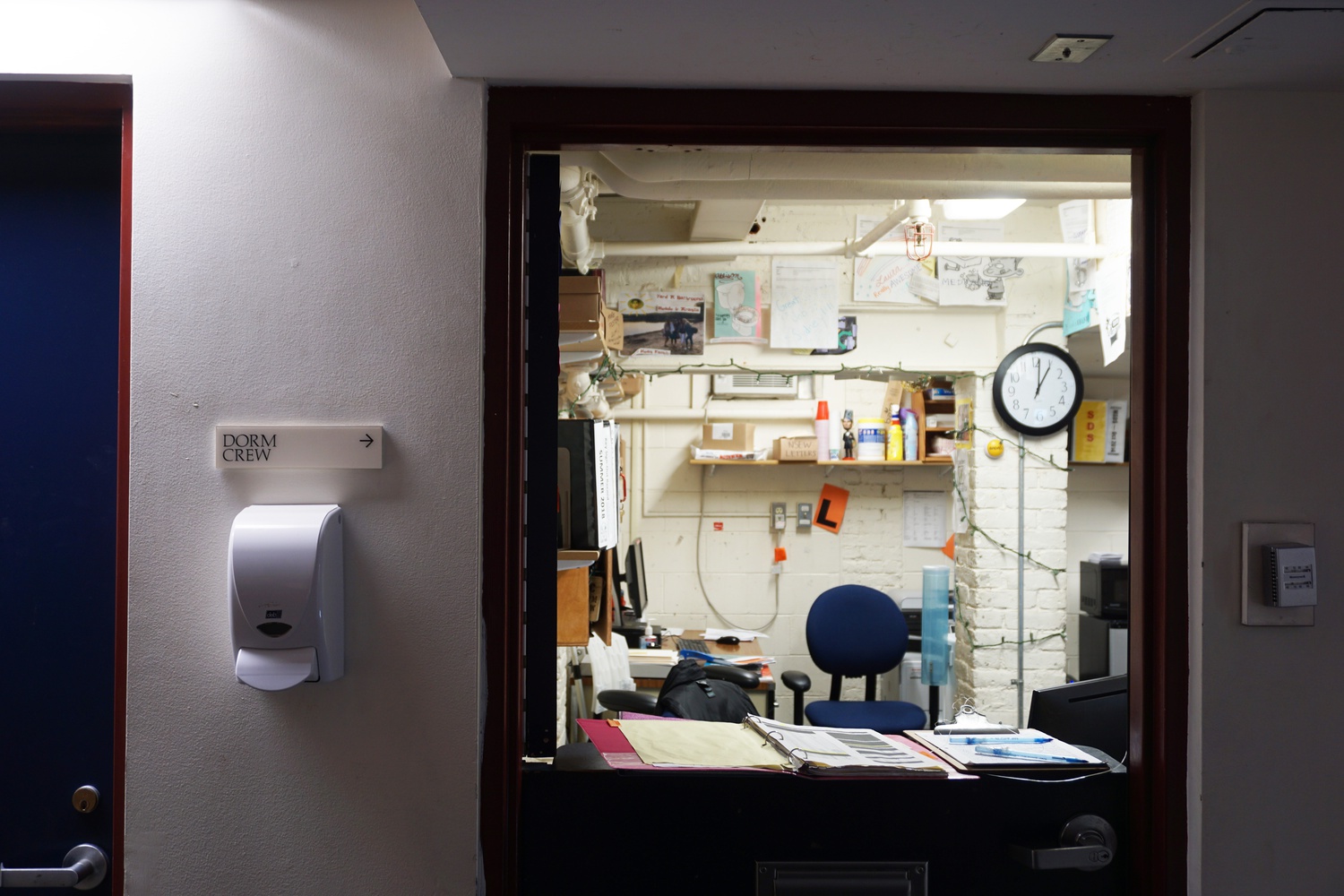 The Dorm Crew office is located in the basement of Weld Hall. By MyeongSeo Kim

A group of academics and students have charged in articles and on Twitter that Dorm Crew — a Harvard College program in which undergraduates clean other students’ bathrooms for pay — is demeaning to the students who participate in it.

Many undergraduate participants, though, say it is a well paying job like any other.

Sara Y. Goldrick-Rab, a professor of higher education at Temple University, sparked a heated exchange on Twitter last Friday with a message questioning the Harvard program.

“Low-income students at HARVARD working 20 hours a week in their first year of college cleaning goddamn dorms?? And we keep giving this wealthy place our public dollars why exactly?” Goldrick-Rab wrote, including a link to a Hechinger Report article on student debt at the nation’s top colleges.

The tweet quickly polarized academics, students, and others who responded on Twitter. Some wrote they agreed with Goldrick-Rab, criticizing with the longstanding College program and arguing it forces low-income students to work for their peers. Others — including many current Dorm Crew captains — disagreed both on Twitter and in interviews with The Crimson, arguing Goldrick-Rab mischaracterized the program.

Similar programs have also come under scrutiny after Assistant Professor of Education Anthony A. Jack at Harvard Graduate School of Education published a book on his research on socioeconomic initiatives at elite universities. In the book, he mentions some universities have programs that pay students to do janitorial work. Those students often come from low-income backgrounds.

In an interview with The Crimson, Goldrick-Rab said she is surprised by how strenuously many Dorm Crew participants defended the program.

“It's one thing to do a job right and to feel like it's normal,” she said. “It's a whole other thing to get up there and, like, really fiercely defend it.”

She argued the College should not use public funds — by way of the Federal Work Study program — to pay students’ Dorm Crew wages.

“A $39 billion endowment — you don't have to be using work study funds to pay for them,” she said.

Some students said they enjoy participating in Dorm Crew because the work is more active than many other on-campus jobs.

“I think it's a great opportunity to be able to do, like, physical work,” Dorm Crew captain Alyssa D. Bravin ’20 said in an interview Wednesday. “Because I feel like at school I'm stuck at my desk all the time and doing work on the computer.”

Bravin and other students also pointed to the fact that — with pay starting at $16.25 per hour with the potential for raises — Dorm Crew pays far better than many other on-campus jobs.

“It's a really great way to, like, earn money on campus and offers a flexible schedule,” Grabin said.

Other students tweeted in reply to Goldrick-Rab, arguing she and the Hechinger Report article misrepresented the program.

“I am middle class, on financial aid, and work for Dorm Crew entirely because I want to,” Amanda D. Maille ’21 tweeted in response to Goldrick-Rab.

“I didn't get why she was attacking our organization so much especially because she just knows so little about it,” Maille said in an interview. “No one even cared to ask, ‘Oh, you're in your organization, what do you have to say about it?’ They just completely disregarded us.”

Daniel I. Mendoza ’21, who began working for Dorm Crew in 2017, said he was excited for Fall Clean Up because it was the first job he was able to take after receiving a green card. He said he thinks critics of Dorm Crew do not understand it.

“I saw a lot of it was sort of pointed at this job being a service job, that students should not be doing service jobs for other students. But that's just sort of the definition of a job,” he said. “It takes away from the from the initial point of addressing it as a systematic thing and tries and really only focuses on us.”

“There are some times when I feel like my work isn't respected, or I don't get 'thank you,' or people demand me to quit certain parts of their room that I'm not assigned to clean,” said Tram Nguyen ’22 in an interview Tuesday. “That just makes me feel kind of not respected.”

Some Dorm Crew participants, however, said they think the job is like any other, and the day-to-day work simply involves a few hours of cleaning and getting a rare peek into the lives of their classmates.

“I know that a lot of people put their toothbrush like on the bare counter and I think they should like put it in a cup or something to keep it from touching the counter,” Bravin said of her on-job observations.