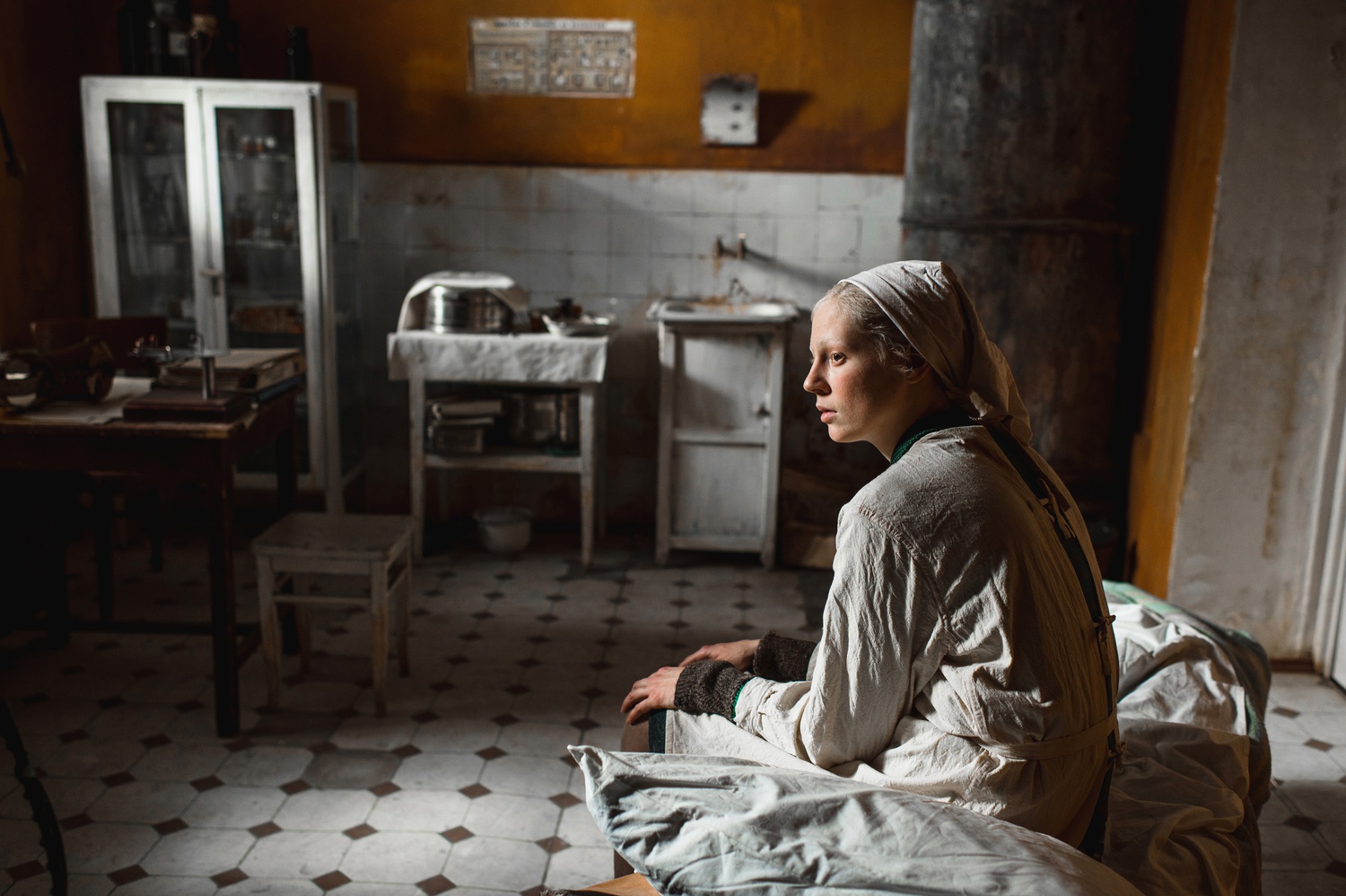 “Dylda” (“Beanpole”) opens with the titular character Iya (Viktoria Miroshnichenko) standing frozen as if in a trance, her muscles unmoving except in small twitches, her eyes open but unseeing. These strange episodes are a result of the lingering effects of a concussion she suffered during the war, but they’re just one physical manifestation of her suffering. In the film, which premiered in the Un Certain Regard category at Cannes, director Kantemir Balagov conveys a beautifully painful story of two women and how disjointed their lives become after the various traumas of World War II. He doesn’t simplify their struggles — instead, his dramatic portrayal of the everyday lives of his characters reflects the physical and mental wounds they have suffered from the war.

It’s the fall of 1945 in Leningrad, right after Russia has won the war, and Iya goes through her days working as a nurse at a hospital filled with veterans. Her son, Pashka (Timofey Glazkov), brings light to her otherwise reclusive life. Iya’s fits of paralysis prove to be fatal, though, when she accidentally smothers and kills Pashka. Not long after, her best friend in combat, Masha (Vasilisa Perelygina), returns from war, and Balagov reveals that Masha is actually Pashka’s mother.

What ensues is the unfolding of two very different depictions of women coping with loss. Inspired by stories from Nobel laureate Svetlana Alexeievich’s book, “The Unwomanly Face of War,” Balagov and co-writer Alexksandr Terekhov pay attention to the grief of women through the drastically different and multifaceted personalities of Iya and Masha. Their physical differences are also remarkable — Iya, who is strikingly pale and wears an equally blank expression, lives up to her nickname “Beanpole” with her tall stature, while the much shorter and more lively Masha dons a head of red hair.

Iya and Masha’s codependency and power dynamics make for a relationship as intimate as it is toxic, and the drama is elevated by the two incredibly talented actresses. Iya can’t bring herself to confess the truth and tells Masha that Pashka died in his sleep, but also tells Masha that she can blame her for his death. Masha, who is now infertile from a wartime injury, takes that Iya “owes her a life” quite literally and becomes obsessed with having a child. At first, she delusionally dismisses the fact of her infertility, justifying her decision to have sex with a gawky young man, Sasha (Igor Shirokov), to Iya by saying, “I want a human inside me ... I want a child. To hold onto.” She repeatedly explains Iya how having a child will “heal” them, and eventually becomes convinced that Iya must have the child for her.

The fixation on healing, as hopeful as it is naive, is perpetuated from not just the female leads in the film. Masha’s case is unique in that as an expected homemaker in her era, she feels purposeless without her reproductive functions. Even though she fought in the war, she credits much of her survival to her sexual prowess. Other veterans, who have no chance of regaining what they lost in the war, are also at a loss as to how they can begin to “heal.” The most explicit case is Stepan (Konstatin Balakirev), a veteran in the hospital Iya works at who is paralyzed from the neck down. The joy he feels when his wife finds him in the hospital after believing him to be dead is short-lived — with two kids and no hope of recovering from his condition, Stepan knows he will be deadweight to the family as it faces inevitable hardships. He pleads for the hospital head, Nikolay Ivanovich (played by the almost paternal Andrey Bykov), to give him the ultimate relief of death, begging, “I don’t want to be like this anymore. I’m done fighting.”

The cinematography heightens the disturbing themes of the film and the sonic details create a resonating, haunting effect. Iya’s fits of paralysis are characterized by her amplified whimpers and small, jerking muscular movements. Most of the film has a dark gloomy cover, and any appearance of colors (usually bright juxtaposing hues like green and red) is jarring and seems almost whimsical, creating a dreamlike dystopian setting. The costumes and sets are gorgeous and realistically crafted to the time period, though, reminding viewers that the horrors shown are very indicative of real struggles faced in the era. Yet amidst the somber material of the film, Balagov manages to throw in humorous twists and evoke laughter. Sasha’s boyish awkwardness makes him an easy target to poke fun at, but part of the twisted wryness is how willingly Masha keeps him around, entertaining the idea that he could be one to spend forever with.

At times, the drama seems overblown. Almost every cut contains some emotional outburst or stirring dialogue, and the scenes that would have otherwise been climatic become tossed to the side when the next gripping scene rolls around. But perhaps the way Balagov overwhelms his audience with the profuse amount of drama in “Beanpole” reflects the immensity of the task that Iya and Masha faced when they attempt to readjust after war, and the sheer impossibility of it.