For the first time since the 2005 season, Harvard baseball won the Ivy League Playoff Series, defeating Columbia by an 8-6 score in a pulse-racing 11-inning affair and advancing to the Regional round of the NCAA Tournament.
By Amir Mamdani 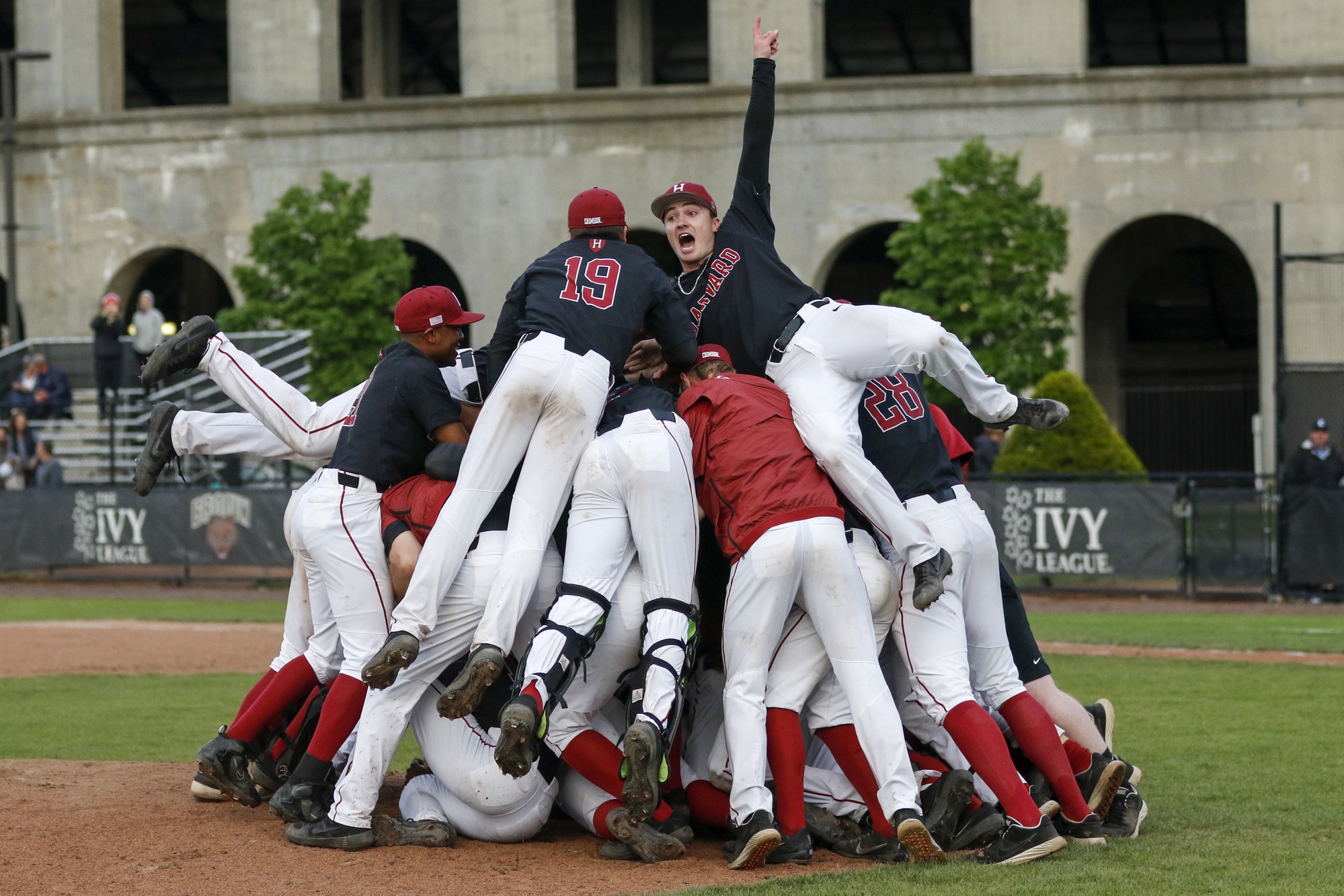 The Crimson celebrate its first berth to the NCAA Tournament since 2005. By Timothy R. O'Meara

It hadn’t happened in 14 years.

For the first time since the 2005 season, Harvard baseball won the Ivy League Playoff Series, defeating Columbia by an 8-6 score in a pulse-racing 11-inning affair and advancing to the Regional round of the NCAA Tournament.

“It feels amazing,” said junior pitcher Hunter Bigge on reaching a mark that Harvard baseball had been unable to accomplish for nearly a decade and a half. “Just knowing how far this team has come and seeing how hard everybody works every single day when we're at the ball field, it really feels good to enjoy the fruits of our labor.”

A season-high three-inning performance from junior closer Kieran Shaw was crucial on Sunday, as the hard-throwing righty pitched the 9th, 10th, and 11th innings, shepherding the Crimson (27-13, 14-7 Ivy) through several stressful situations. While the win was the Los Gatos, Calif., native’s first of the season, it was hardly the only highlight of what has been an incredible, record-breaking campaign for the third-year. 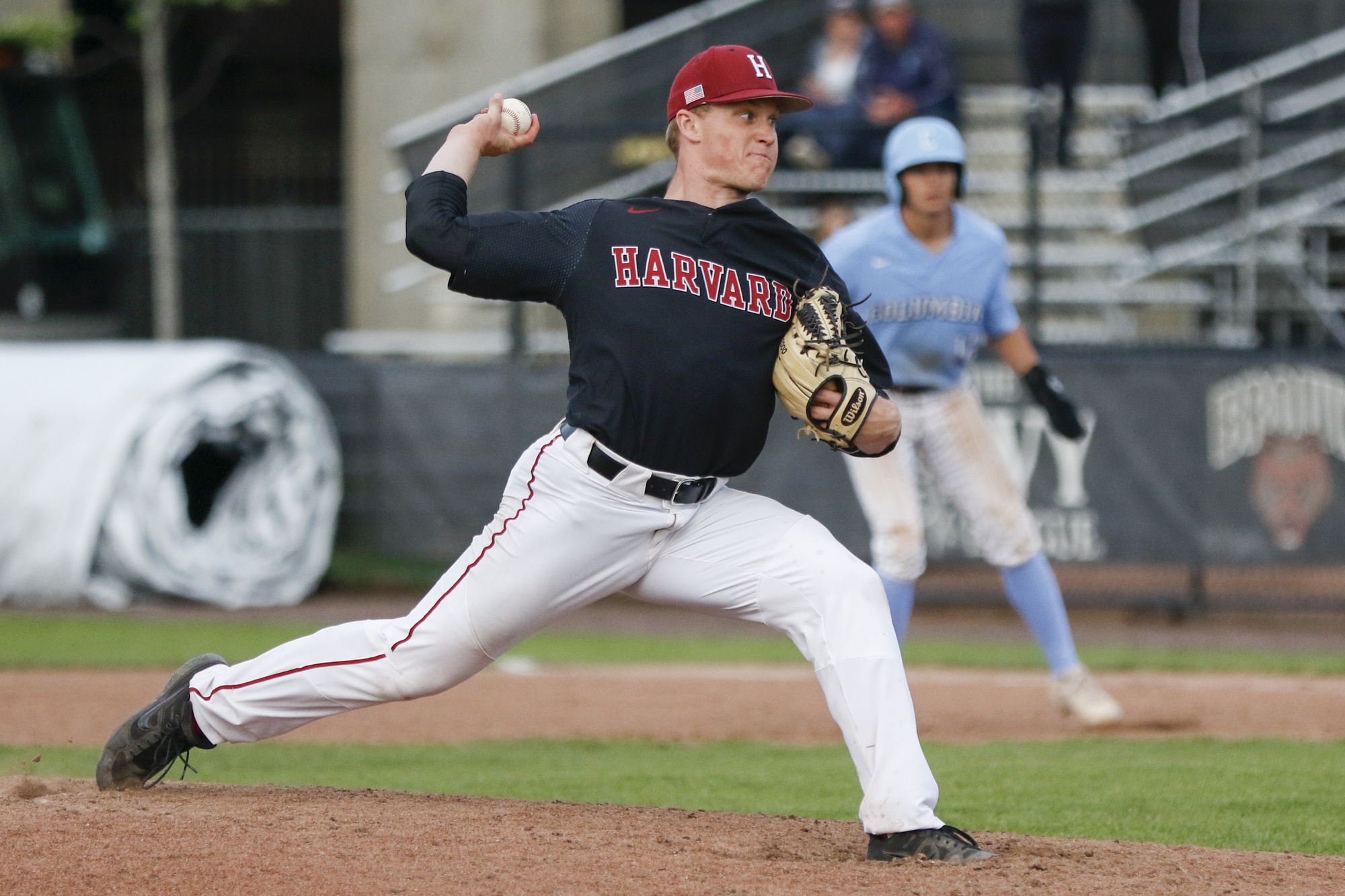 If Shaw closing out the game felt appropriate, it was equally apt that senior first baseman Patrick McColl had the two biggest hits of the series-clinching victory. With Harvard trailing Columbia (19-23, 13-8) by a 4-1 score in the 6th inning and with two runners on base, McColl delivered one of the biggest hits of the season, crushing a ball over the center-field fence to tie the game and send Lions’ starter Ethan Abrams to the showers.

Five innings later, McColl came to the dish with the score knotted up at six. The bases were loaded with one out, and Columbia’s ace reliever Dan Harrington quickly earned an 0-2 advantage in the count. But just as he has all season, the Los Altos, Calif., native came through in the clutch, driving a double to left field to knock in the winning runs, giving the Crimson the 8-6 lead in the 11th. 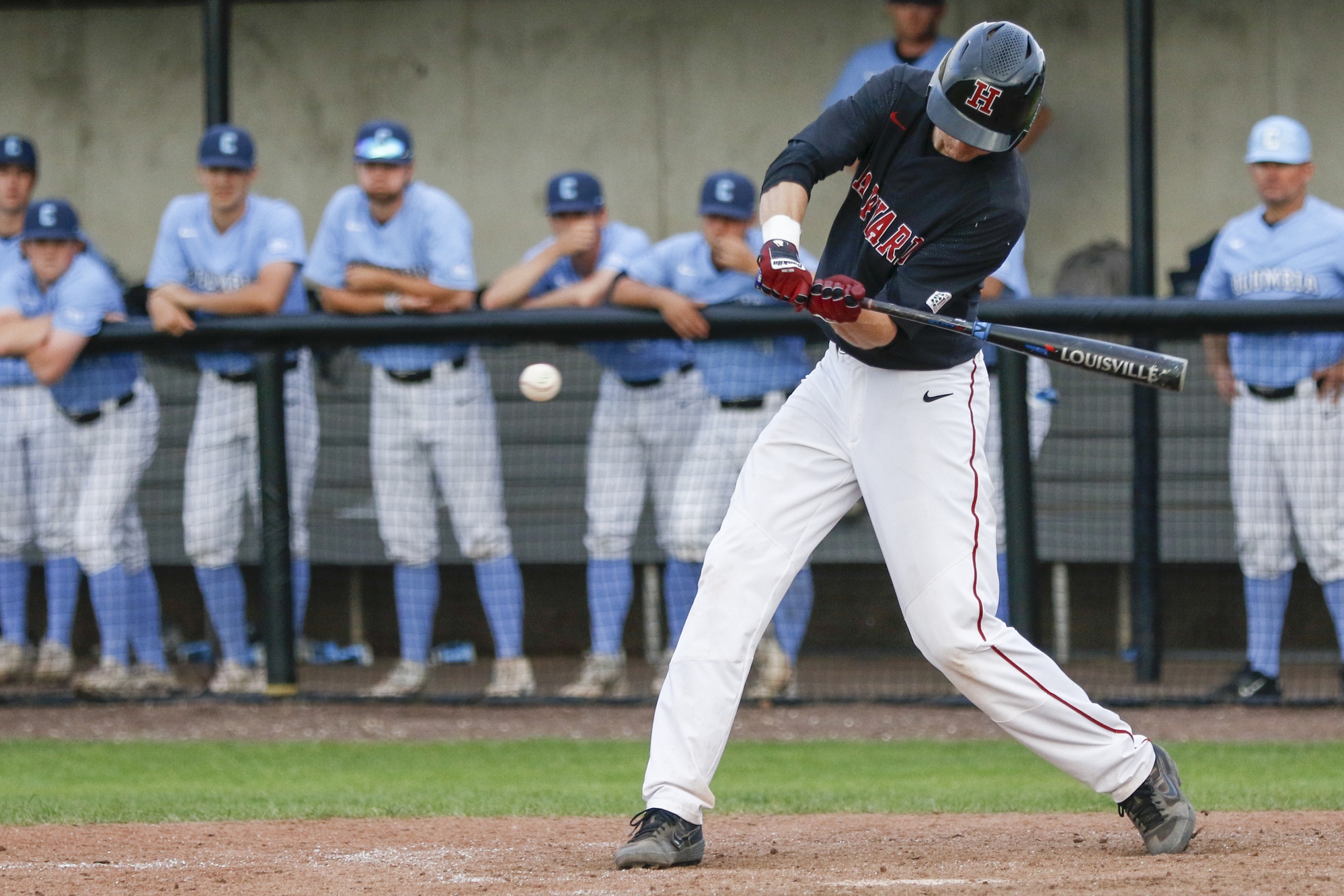 McColl’s five-RBI performance was a fitting conclusion to a terrific campaign out of the three-hole in the Harvard lineup from which he hit .396 and knocking in 12 home runs and 46 RBIs. His performance was crucial in helping the hosts snap the program-record Ivy League Championship drought.

“Everybody knows who Pat is now,” said Harvard coach Bill Decker of his star first baseman, who led the country in batting average for a brief spell at the beginning of the season. “He just finds a way to have ice in his veins, he’s part of that resilient factor that we talk about. Wonderful, outstanding human being, he’s just unbelievable.”

Sunday’s contest lasted just shy of four hours, featuring several momentum swings in front of a packed house of 1,050 at Joseph O’Donnell Field. The Crimson swept the weekend series from the Lions, but both games were thrilling affairs, an appropriate conclusion to an Ancient Eight campaign that featured a tintillating three-game series between the two sides a mere three weeks ago.

Columbia jumped out to a 3-0 lead off of Harvard senior starter Kevin Stone, who yielded three runs in three innings on Sunday. Stone, a four-year starter who was moved out of and back into the rotation this season, struggled early, but found a way to work out of trouble and keep his team in the ballgame.

“Those guys have been troopers our entire Harvard baseball careers and they’ve thrown the ball really well for us,” said Bigge about Stone and his fellow senior starter Ian Miller. “Kevin gave us a good start today and kept us in the game and that’s all it’s about for starting pitchers.”

Stone’s start might not have occurred under different circumstances, but with star sophomore starting pitcher Buddy Hayward returning from injury, the veteran was thrust onto center stage for the series-clinching victory. Although Hayward was unable to start, he entered the fray in the 7th inning with Harvard leading by a 6-4 score, recording a crucial out from the bullpen to strand a pair of runners.

When Hayward returned for the 8th inning, the starter turned-reliever did not fare as well, surrendering a two-out base hit that would score a pair of runs, tying the game at six apiece. Hayward was able to escape the 8th inning without further damage, setting the stage for nerve-wracking 9th and 10th innings, before the Crimson finally broke things open in the 11th.

If Sunday’s game featured back-and-forth offense from both sides, Saturday’s series opener was the epitome of a pitchers duel. Bigge toed the rubber, the staff’s No. 1 pitcher in Hayward’s absence, and threw a complete game masterpiece. The third-year surrendered just one 9th-inning run on a questionably-called balk, tossing a herculean 128 pitches, but was matched practically inning-for-inning by Columbia’s Josh Simpson.

Simpson and Bigge posted goose eggs until the bottom of the 7th inning, when Bigge made yet another imprint on the game — from the batter’s box. Bigge drove a Simpson fastball out to right field to lead off the inning, and the ball carried over the right field wall to break the impasse, giving Harvard a 1-0 lead that it would supplement with two 8th-inning runs.

Bigge’s performance was particularly impressive in a league that rarely features pitchers that bat for themselves in lieu of a designated hitter. The deadlock-breaking home run embodied the age-old baseball adage about the importance of pitchers “helping themselves”.

“It just comes down to preparation,” said Bigge of his two-way performance. “I don’t really think about it too much on game day.” 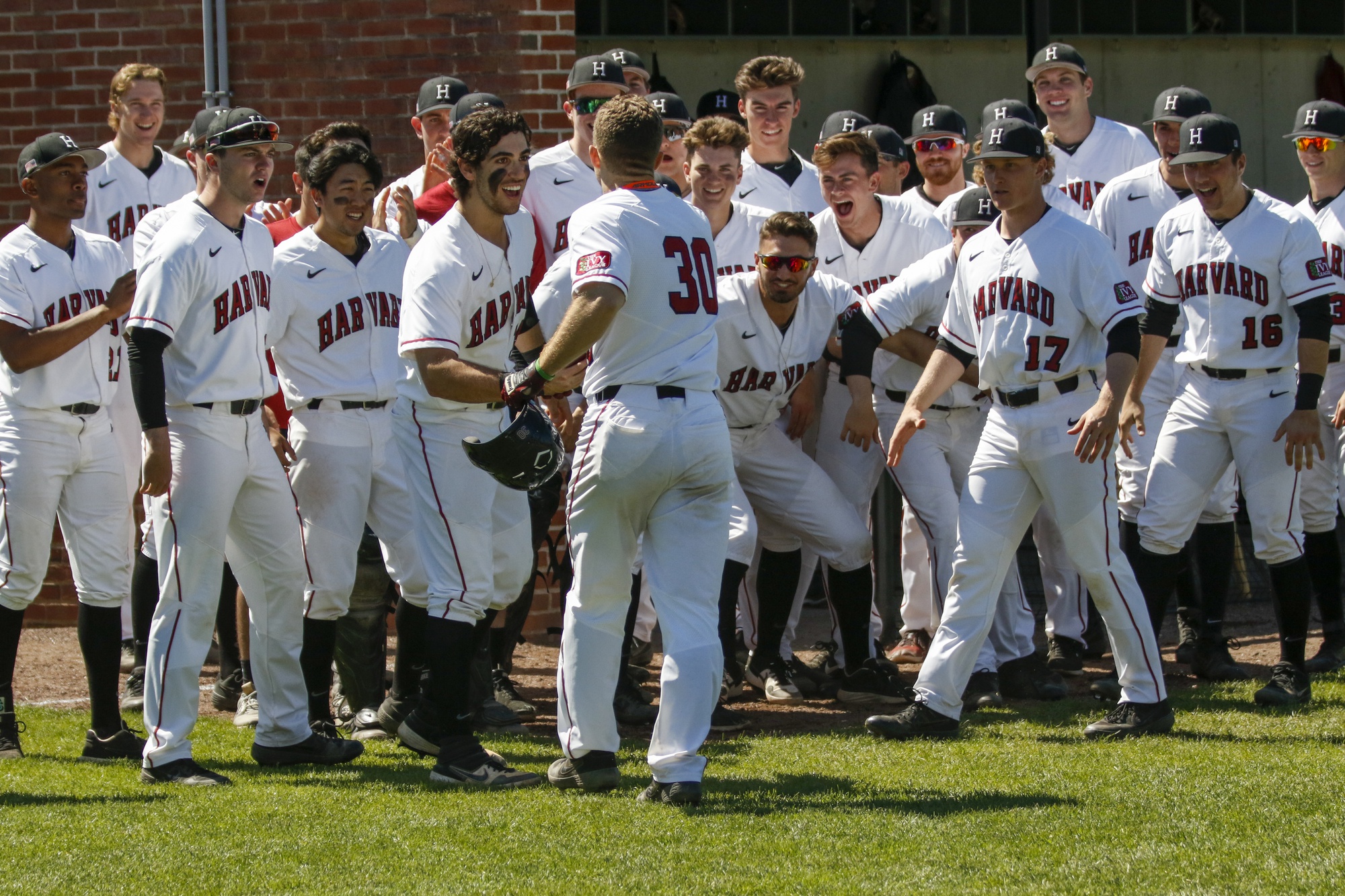 The Crimson held the Lions to just one run in the first game of the series. By Timothy R. O'Meara

With the Crimson leading by three runs entering the 9th inning, Coach Decker had a decision to make. Stick with Bigge, or go to the pen for a closing performance from Shaw. The first two runners reached base on singles, bringing the tying run to the plate in the form of Columbia’s star Chandler Bengtson. With Bigge’s pitch count well over 100, Shaw’s entrance into the game felt inevitable. The right-hander was loose in the bullpen, and ready if called upon.

But Decker trusted Bigge to finish what he started, a decision that paid off in more than one respect. While Bigge’s shutout was spoiled by the balk call by the home plate umpire, he was able to finish off Saturday’s final three outs, preserving Shaw’s arm for Sunday’s contest. Shaw would have unlikely been able to throw three innings on Sunday were it not for Bigge’s complete-game performance.

Bigge, Stone, Shaw, Hayward, and so many others embody the success Harvard baseball has experienced all season. Many players have had their opportunities to contribute, and also trust their teammates to finish the job. 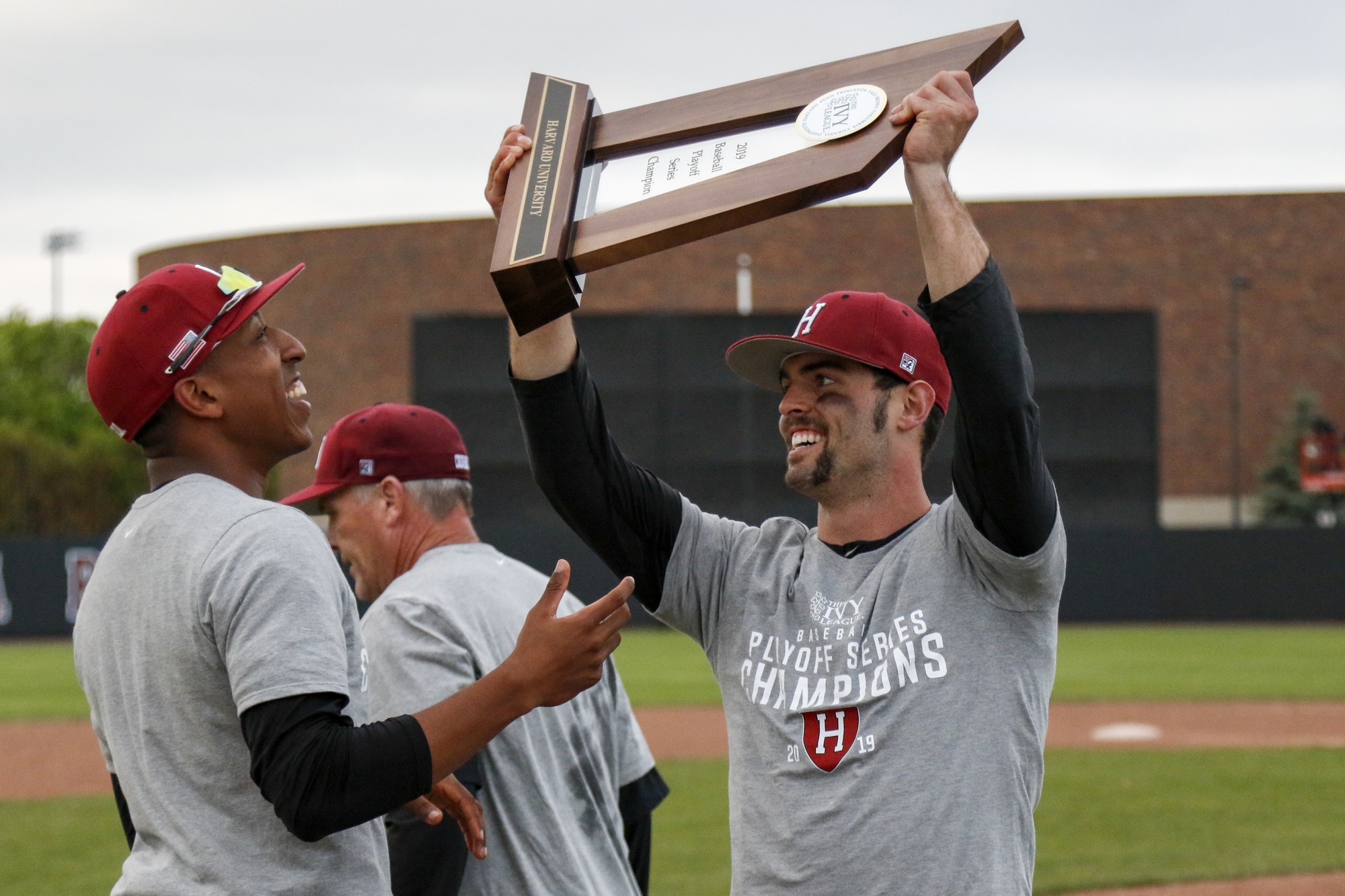 This is a Crimson team that has not lost a series all season.

That is a statistic that should not be overlooked, particularly as Harvard departs the confines of the Ancient Eight for the NCAA Tournament, an entirely new ballgame. In just over a week, the team will gather on Memorial Day for College Baseball’s selection show, when the Crimson will discover their fate for the Regional round of the tournament.

Powerhouses like UCLA, Vanderbilt, Stanford, and Oregon State loom large in the distance. But with a respite of play for two weeks, Coach Decker’s team can afford to take a step back and appreciate what it has accomplished.

“There’s been some challenges,” said Coach Decker of his journey at the helm of a Harvard program that went went 10-31 and and 11-28 in his first two seasons in 2013 and 2014. “This is the best moment that I’ve personally had, it’s just my feeling about this group of kids.”

Harvard baseball hadn’t been to the NCAA Tournament since the 2005 season. But in 2019, not only did they win the league outright, they won two out of three games in each Ancient Eight series, ironically earning its first sweep of the conference season in the Championship series.

There are 11 days between now and the Crimson’s first game in the Regional round of the NCAA Tournament, on May 31st. There will be hours of preparation, scouting, flight-booking, hotel-reserving, and practice, between now and then. But those are worries for another day.

Ultimately, everyone who was in attendance at Joseph O’Donnell Field on Sunday will be left with the memory of over 30 Harvard baseball players storming the field and mobbing Shaw, reveling in the taste of an Ivy League title that has been 14 years in the making.

For Coach Decker and his players, it’s a moment they will surely never forget.