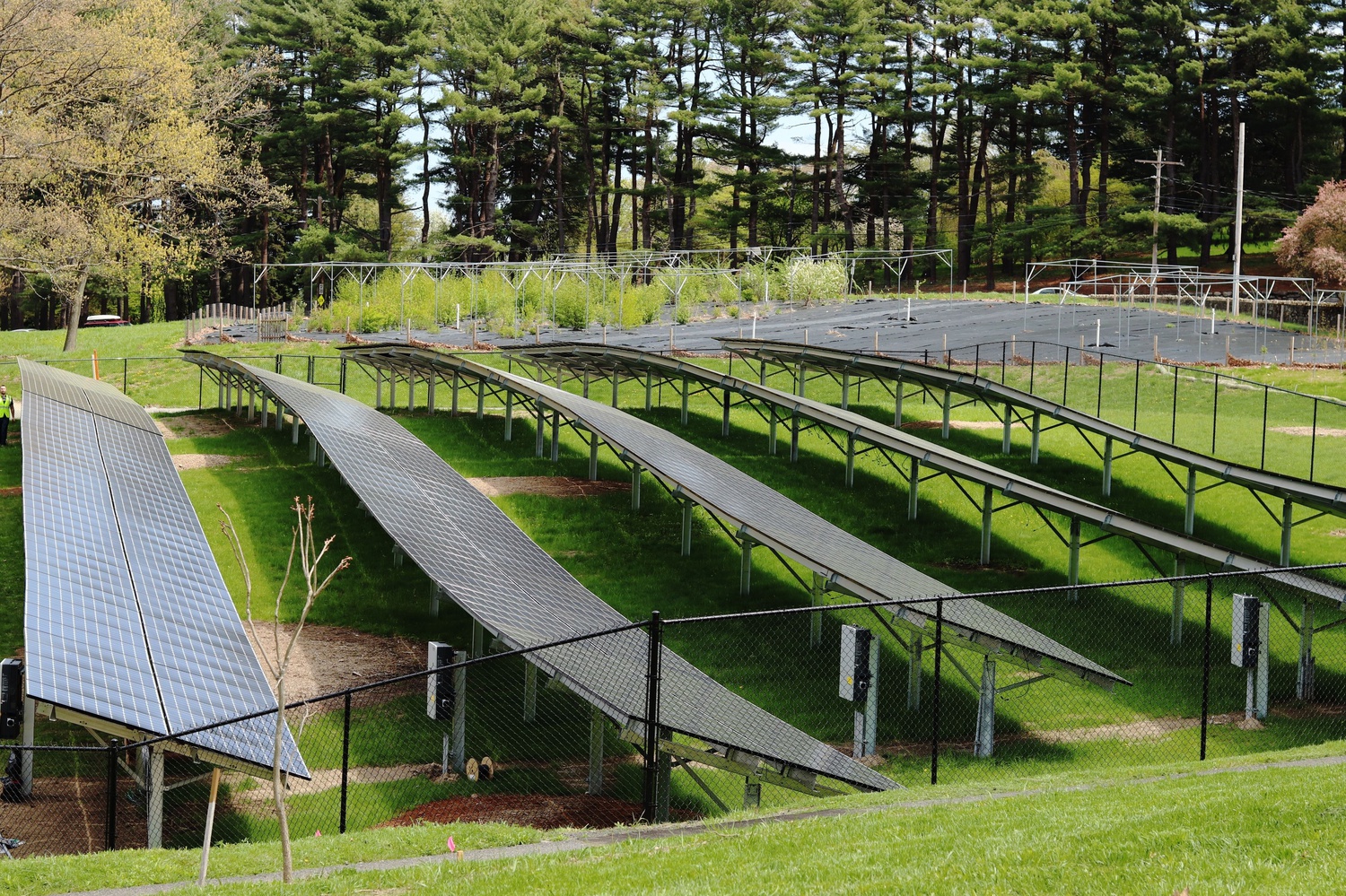 The Arnold Arboretum is in the process of installing new solar panels to generate energy as part of their mission to lower their carbon footprint. By Kathryn S. Kuhar
By Juliet E. Isselbacher, Crimson Staff Writer

Established in 1872, the Arboretum is simultaneously a research institution and a public park. The Weld Hill Research Building stands just outside the Arboretum’s living collection.

The solar panels are part of the Weld Hill Solar Project, which nears completion this coming fall, and is projected to produce more than 25 percent of the total energy used at the Research Building.

Steven Schneider, director of operations at the Arboretum, said the system will feature battery storage, taking stress off the electrical grid at times of peak energy usage.

“It helps on those 90 degree days when everybody’s running their air conditioners, and so the demand for electricity goes way up,” Schneider said.

The rechargeable batteries “cost a small fortune,” bringing the project’s total cost up to “a couple million,” Professor of Evolutionary Biology and Director of the Arboretum William Friedman said.

Friedman also said Harvard has lent funds for the project at a zero percent interest rate. He said he expects the Arboretum to pay back the University within 10 years.

“I'm not trying to tell you everything's perfect with Harvard, but what's been great is that they put cash on the table,” Friedman said. “That's a really empowering sort of policy. And most universities, I'd say, probably don't have those kinds of things.”

Despite this loan to the Arboretum’s clean energy initiative, Harvard has not given any indication that it will divest its nearly $40 billion endownment from the fossil fuel industry. University President Lawrence Bacow has said multiple times that Harvard will not divest.

On whether Harvard should divest, Friedman said divestment may or may not “move the needle on carbon immediately.”

“From my perspective, what we're really interested in is immediately reducing how much carbon we as scientists — or as a community here at Harvard — put in the air,” he said.

Schneider said he thinks the project will not have an effect on whether Harvard ultimately decides to divest.

“None of this, I would say, really has any relation to sort of the bigger picture of the Harvard Corporation and what they choose to invest in or not,” Schneider said. “This is more of a project that focuses on the the local energy economy, if you will.”

The solar project follows the installment of two other solar arrays on Arboretum-affiliated buildings, as well as efforts to install energy efficient windows and compost dead plant matter.

Schneider said he hopes the Arboretum will “be a shining example of what is possible” for other institutions in Boston — a city that aspires to be carbon neutral by 2050.

Sheryl White, the coordinator of visitor engagement and exhibitions at the Arboretum, said the Arboretum intends to use the project to educate the local community on solar energy.

“I also work with our art exhibitions. And so it's possible there's something that we can connect [the solar panels] to art in some way,” she added.

Schneider said he wants people to take sustainable actions in the future.

“We've gotten people coming in and saying ‘Wow, this looks really cool,’” Schneider said. “We want people to see this. We want them to be inspired and say, ‘Hey, what can I do? How could I do something like this? And we want that to be the regular homeowner.”