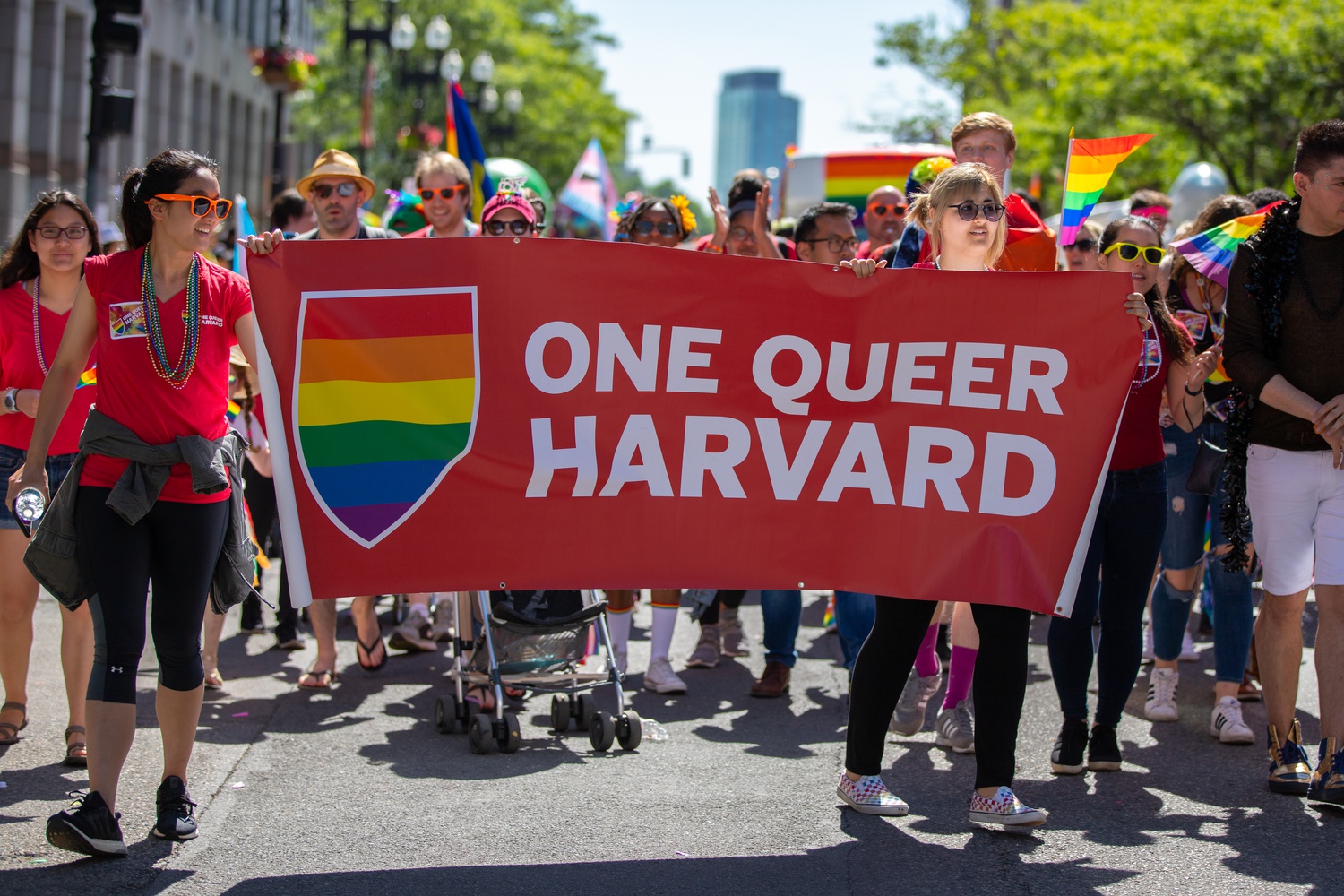 A group of Harvard students marched down Boylston Street as a part of the Boston Pride Parade last Saturday afternoon. This year's theme was "Looking Back, Loving Forward" in celebration of the 50th anniversary of the Stonewall Riots. By Mariah Ellen D. Dimalaluan
By Delano R. Franklin, Crimson Staff Writer

The Harvard group paraded through Boston’s Back Bay and South End as part of the annual celebration of BGLTQ history and identity, which kicked off at noon in Copley Square. This year’s festivities featured a record 431 marching groups, marking what the parade’s organizers said was expected to be the city’s largest Pride Parade yet.

Harvard’s LGBTQ Employee Research Group organized the group of University affiliates who marched in the parade in collaboration with the College’s Office of BGLTQ Student Life and student group One Queer Harvard. On Saturday morning, the Office of BGLTQ Student Life hosted a brunch in its Grays Hall office, during which students distributed red t-shirts reading “One Queer Harvard” to attendees, before heading to the parade.

As she was lining up to march in the parade, Linda Zhou — a community coordinator at the Harvard Innovation Lab — said she was happy she could attend the event with other students and staff.

“I just want to be here and be part of the community because I think having queer spaces is so important,” Zhou said. “I just love that Harvard is organizing this.”

Nate E. Stauffer, who graduated in May from the Graduate School of Education, said he was “very excited” to be marching with a group of Harvard affiliates given historical discrimination against BGTLQ students at the University.

“I think it’s important to acknowledge that this is an institution that, less than a century ago, systematically expelled queer people and led to the deaths of several students who identified as queer,” Stauffer said. “So to know that less than a century later here we are, wearing the Harvard label and expressing our identities freely in the streets of Boston is a cool thing.”

Roughly a century ago, the University conducted a purge of gay students — known as the “Secret Court” of 1920 — that was connected to at least one suicide.

The parade marks the beginning of Boston Pride, which features concerts, parties, and other events to celebrate BGLTQ history and identity throughout the first week of June. This year’s theme for Boston Pride Week commemorates the upcoming 50th anniversary of the Stonewall riots, according to Boston Pride’s website. The Stonewall riots — a series of demonstrations for BGLTQ rights in New York City — are widely considered to have sparked the gay liberation movement and inspired the hosting of pride parades in cities throughout the country.