Summer Postcard: My Morning Commute: The Hallways of History 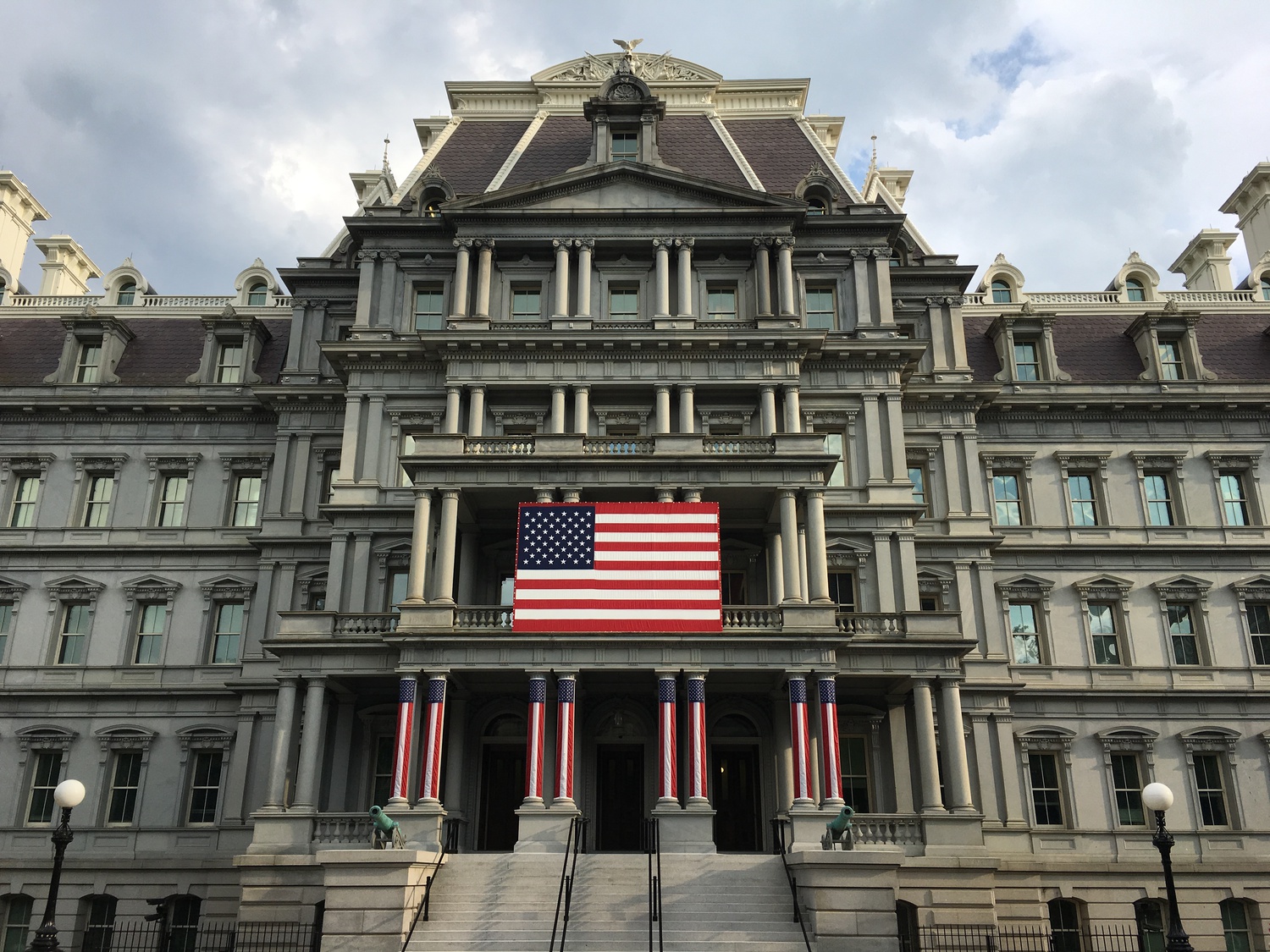 WASHINGTON, D.C. — It’s 8:57 a.m., and I’m close to running late as I arrive at the gate. I place my bagged lunch in a little bin that goes through the X-ray scanner, and I pass through the metal detector. Exiting the checkpoint, I always feel as if I’m stepping into another world; I’ve left behind the hustle and bustle of the tourists and Beltway commuters who pack the metro cars and streets each morning.

It’s only a short walk down a quiet driveway before I make my way up the steps of the east entrance of the Eisenhower Executive Office Building. The EEOB, as it’s called, is a vast complex — a rare instance of French Second Empire architecture that stands out in a city known for its neoclassical constructions. The entrance is as imposing as the rest of the building. I pass under three balconies, each supported by a dozen columns — of which there are literally a thousand built onto every part of the exterior. The front doors swing open to reveal the diagonal black-and-white checkered floors that canvas the hallways, combining into one massive chessboard.

My morning walk ends with a climb up four staircases, which form magnificent spirals from one floor to the next. This is the most magical part of the commute — no, not the stairs (even though they are incredibly ornate) — but rather a series of unassuming rooms that line the stairway. Together, they tell the story of a country’s experience of living, as the proverb goes, in interesting times.

At the foot of the stairs, I catch a glimpse of Room 180 on my left. It was once occupied by Richard Nixon, who couldn’t get used to the Oval Office and instead came across the street to complete his work here, in his private study. The taping system he installed tells us that Nixon and Henry A. Kissinger ’50 regularly huddled in Room 180; it was here that they planned much of the operation to secretly establish contact with the People's Republic of China, then in self-imposed exile and isolated from both the West and the Soviet Union. That initiative culminated in Nixon’s historic visit to China. Without the developments in this room, the Cold War may not have concluded in the 20th century, a nation of 1.3 billion might still be closed off to the world, and, more personally, my parents would never have been able to come to America — or for that matter, even have met each other in Louisiana as young graduate students.

Ascending to the second floor, I pass by Room 208, formerly the office of twenty Secretaries of State; the last of that old guard was George C. Marshall Jr., who planned the rebuilding of a continent. Rounding the staircase, I see out of the corner of my eye the number 302, which entered the American psyche as the office of Oliver L. North; here was the nerve center from which he coordinated the illicit Iran-Contra operations in the 1980s.

Finally, reaching the fourth floor, I make a right at the meeting space known as the Indian Treaty Room. It’s a quiet space where the lights are often turned off in the mornings and the outside is nondescript, except for a small plaque and a sign above the entrance that reads “Library.” Seventy-five years ago, it was filled with representatives from around the world, here for the signing of the U.N. Charter and Bretton-Woods agreement that laid the groundwork for a post-war order. The endpoint of my commute is two doors down from a room that, as Acheson would remark, was present at the creation.

It’s on mornings like this that I remember these hallways were once walked by a youthful Navy Department official (and former Crimson president) named Franklin D. Roosevelt ’04, a military aide named Dwight D. Eisenhower, and economists with names like Robert M. Solow ’44 and Kenneth J. Arrow.

And with that, I’m at my room. It’s a small one by most standards, one of more than five hundred in the building. But that’s how it should be, in a place that appropriately dwarfs the individual — one that has seen the rise of a republic from the ashes of the Civil War to the helm of the modern world.

People will come and go, and summer interns like me will soon be forgotten. But there will be a constant; it has stood here for a hundred and fifty years, and it will stand here for many more, keeping watch as a long yet unfinished story is slowly written inside.

I am a bit glad that my time here is so limited; I can’t help but think that it would be a shame if these checkered floors lost their luster. I’m reminded a little of being at Harvard, where it’s far too easy for me to look down at my phone as I walk through the Yard, often forgetting the magic of a place that is so special. It’s a funny sort of habituation that sneaks up on all of us. Other editors have written far more eloquently about it in these pages, and it’s from them that I gain a new degree of recognition.

So, this summer, I’ve given myself a mission: I’ll try to dance around the erosion that comes so inevitably with the passage of time — just long enough, I hope, to remember the same feeling of awe on my last day as I did on my first.