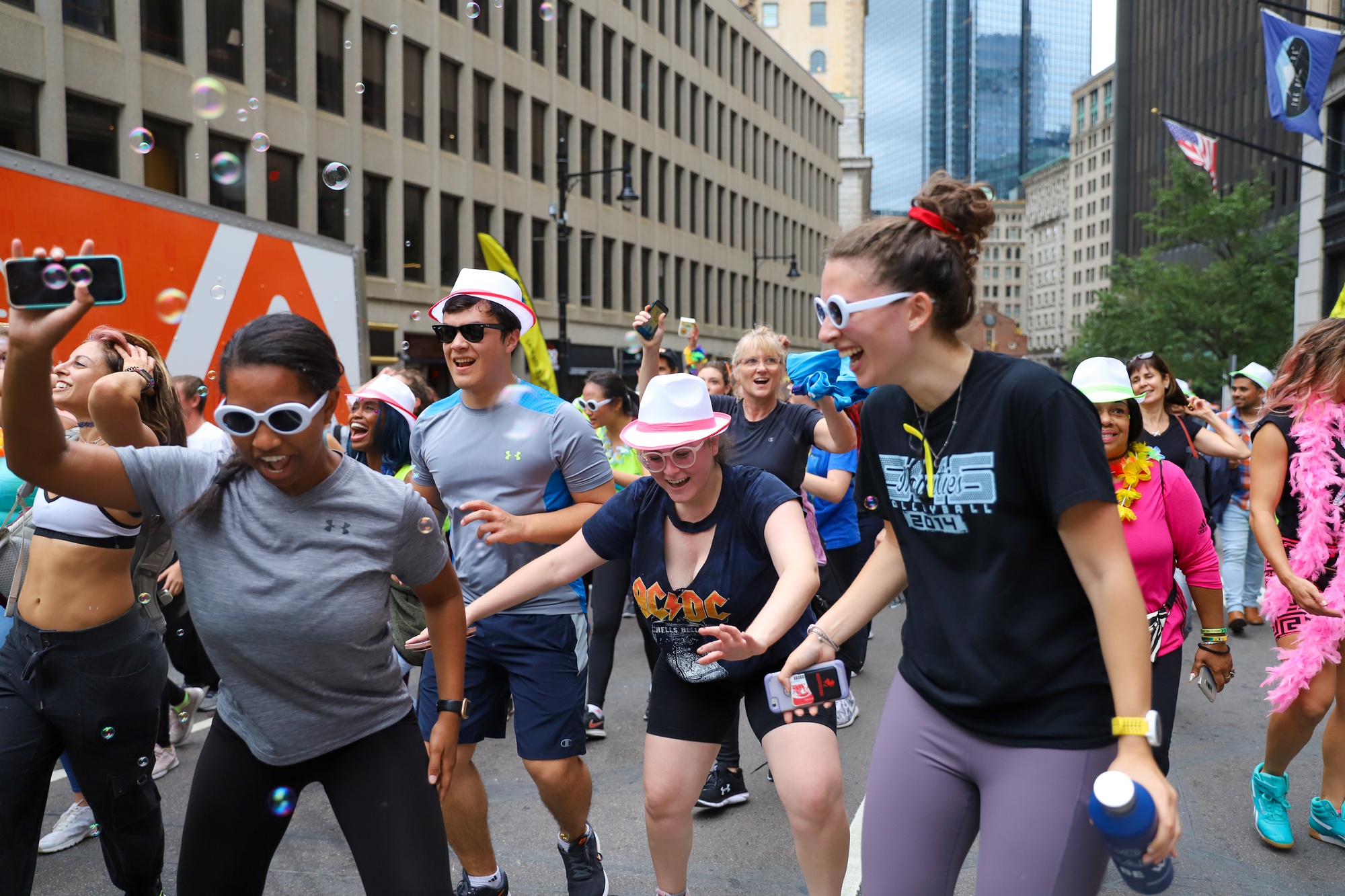 Northeastern third-year students in attendance of the Boston Dance Mile break it down in downtown Boston.
Advertisement
Advertisement

The Dance Mile's website promises “5280 feet of pure awesomeness,” and under the rules section, they insist in all caps to “HAVE THE MOST FUN POSSIBLE.” It’s barely noon on Saturday, and FM has sent me to a dance party in the middle of Boston hosted nominally by Mayor Martin J. Walsh.
By Rachel Chen

I have to blink twice before it registers. Punching arms and kicking feet. A white-haired gentleman in New Balance sneakers following each stomp exactly two beats behind. A woman in a bright orange tutu chest-pumping until she needs to pause, mid-song, for water.

Then I notice the sky: Threatening clouds hang over the sea of bouncing ponytails. The idea of dancing in the rain spontaneously is vaguely appealing. Organized mass Zumba under a guaranteed storm? Considerably less so.

It’s barely noon on Saturday, and FM has sent me to a dance party in the middle of Boston hosted nominally by Mayor Martin J. Walsh. Part of me wonders if the mayor is partaking in the festivities himself. After all, anyone can benefit from a class hosted by 305 Fitness, a cardio, zumba, and hip hop workout studio whose goal is to “#MakeSweatSexy.”

This 305 popup class is one of the last programs in a full day of activities for the 4th Annual Boston Social Fitness Festival. Its goal is to “get Boston moving!” by sponsoring a free day of exercise-related activities. The day kicked off at 7 a.m. with Daybreaker, a morning dance party with an “Epic 90s Back to School ‘Sunrise Recess’” theme (open to interpretation), and then powered through various fitness classes led by local gyms. Behind the main stage, an open air spin studio sits beside kombucha stands and vendors offering “gluten-free honey vanilla crunch” samples. The programs culminate in the Dance Mile, which is exactly what it sounds like: Participants dance for a mile on closed off city streets behind a massive, bedazzled float blasting music. Think of the parade scene in “Ferris Bueller’s Day Off,” but with more neon. 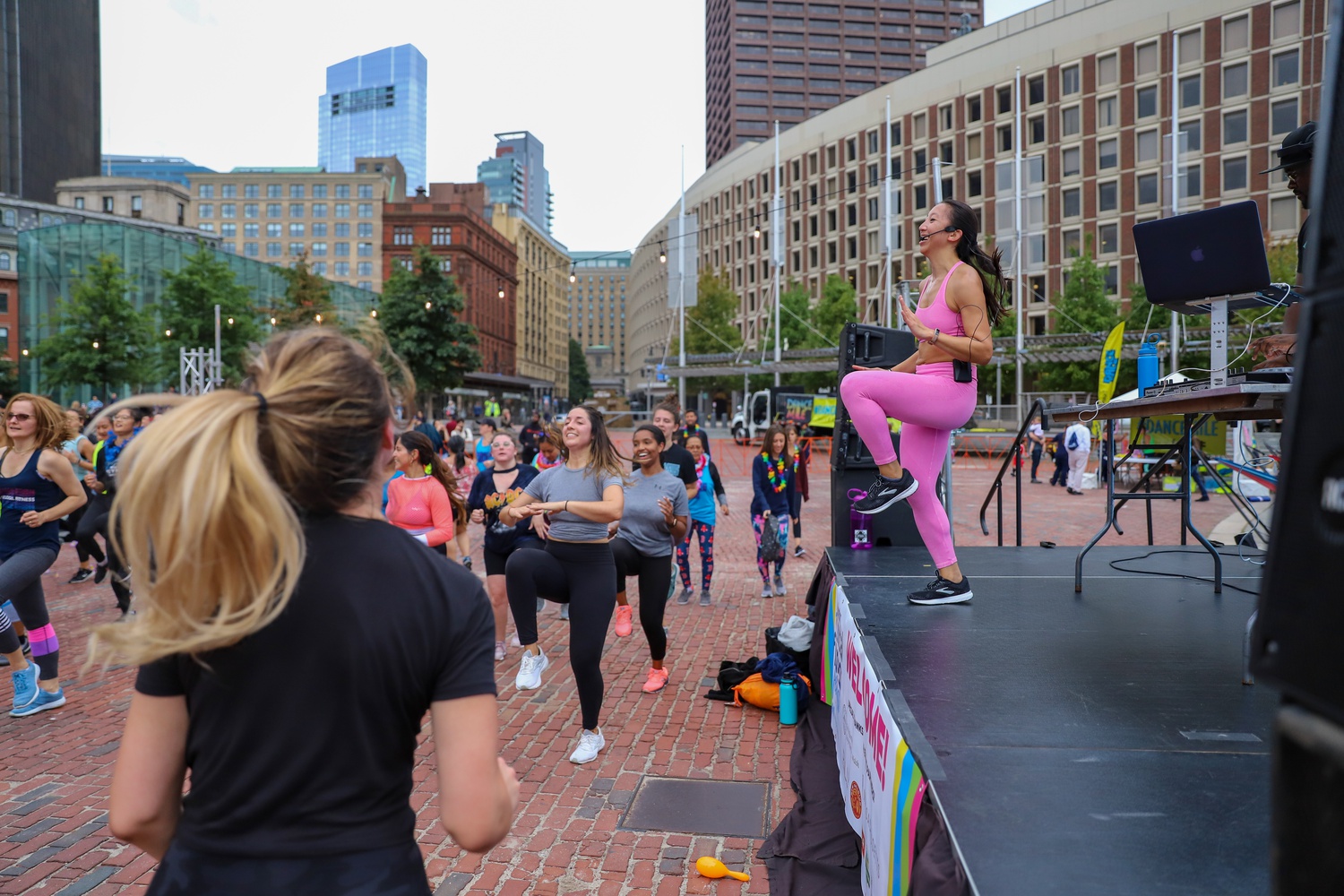 Rebecca T. Pham, an instructor at 305 Fitness in Boston, leads the attendees of Boston's Social Fitness Festival in an active workout. By Ryan N. Gajarawala

The Dance Mile is technically an independent traveling company, but its registration fees have been covered by Martin J. Walsh for Saturday’s event. Similar to the Color Run (though not yet quite as big), the Dance Mile has hit cities from Chicago to Minneapolis to Colorado Springs. It seems relatively new — the website’s earliest reported event is in May 2015 — which tells me it’s a younger sibling in the millennial family of Sweatcoin and Sweetgreen and SoulCycle.

Their website promises “5280 feet of pure awesomeness.” Under the rules section, they insist in all caps to “HAVE THE MOST FUN POSSIBLE.”

As the float starts to crawl away from City Hall Plaza, blasting funky Latin pop and streaming bubbles, it seems as if people will be breaking the Dance Mile’s website’s command to “Dance first, think later.” Energy is low as people glance side to side in self-conscious chagrin. We shamble forward to the beat, arms swinging halfheartedly. Each person is trying to gauge exactly how much hype is socially acceptable.

But then from the float, a dancer wearing a backwards orange baseball cap begins to fist pump, raining down pink feathers from the boa around his neck, and we collectively decide to be more hype. Before the chorus even begins, people are itching to jump.

The crowd seems to be mostly women of all ages and sizes, but more men and children are woven between them than I had expected. Nearby, a teenage girl decides her plastic fedora is too much trouble to dance with and stoops low, still bopping, to offer it to a small sullen boy in a chartreuse fleece. A bright blue t-shirt sails through the air from the back of the truck, and a tall man snatches it before the shorter waving arms around him can grasp its fabric. After a second’s pause, he hands it to the girl next to him, who smiles at him with bright, transparent affection.

“We’re about to go past a construction site! Let’s show ’em how to move!”

The front row closest to the speakers is occupied by a group of teenagers in fishnet tights, face glitter, and seashell-adorned headbands, who go absolutely wild when Whitney Houston’s “I Wanna Dance with Somebody (Who Loves Me)” blasts forth from the speakers. Two toddlers ride like royalty above the pulsing, throbbing masses on their parents’ shoulders, each sporting an impassive expression; one wears pigtails and a unicorn horn headband while the other chews on the flowers in his lei.

Though the two toddlers remain aloof, the rest of the crowd becomes more euphoric, screaming along with the lyrics and erupting into fist-pumping, gyrating, twerking pandemonium. It’s hard not to be swept up in the contagion when you’re swimming in a stream of bubbles and the bass is loud enough for you to forget the real world. It’s almost a relief to bust down with wild abandon, sober and in the light of day, while passersby on Congress Street take pictures in befuddled, pleasant surprise.

A woman tries to FaceTime her mother in the middle of the crowd, but when her voice fails to carry even after pressing her face to the microphone, she screams, “Love you Mom, bye!” and promptly gives up. After all, how could you not be present when surrounded by such color and sound and joyfully flailing limbs? What is dignity when everyone around you knows all the words to “All Star” and “I Want It That Way”? 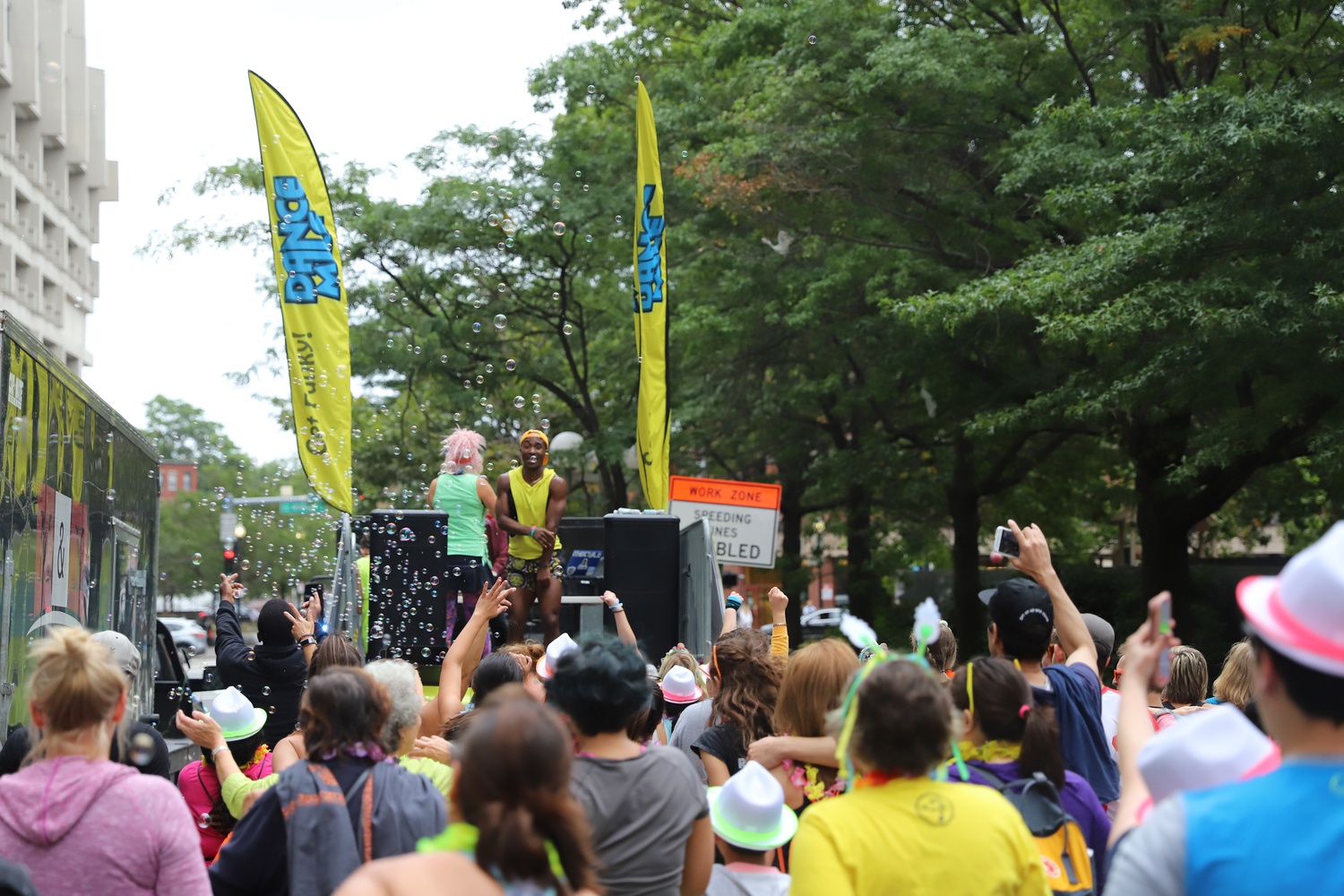 The Dance Mile, a 2019 Boston Social Fitness Festival event, is an interactive dance experience that takes place in the streets of downtown Boston, near City Hall Plaza. By Ryan N. Gajarawala

As we turn the corner back towards City Hall, one of the event organizers in the front row taps our photographer on the shoulder and hollers, “Here’s a picture for you!” She sashays up to a traffic policeman and shimmies into his space. Before he can even react, another organizer brandishing a neon yellow flag joins them, and three attendees seize their opportunity. He chuckles, resigned but flattered, and starts to step-touch-clap to the Shawn Mendes single closing the parade.

A passing taxi driver honks at the final beat drop and flashes a thumbs up out the window. People clamor toward the float the last song ends, eyes full of hope, grabby fingers reaching for free shirts, and then it’s over. The event organizers try to direct the crowd toward a “post-workout party,” but the masses disintegrate too quickly. Clutching plastic sunglasses and neon leis, people check their phones and hustle away to their real lives.

Men wearing headsets disassemble pop up stands and wheel dollies of merchandise away. Soon, all that is left of the fitness jubilee is a few abandoned fedoras and half-drunk bottles of kombucha rolling like tumbleweeds across the plaza.

—Magazine writer Rachel Chen can be reached at rachel.chen@thecrimson.com.