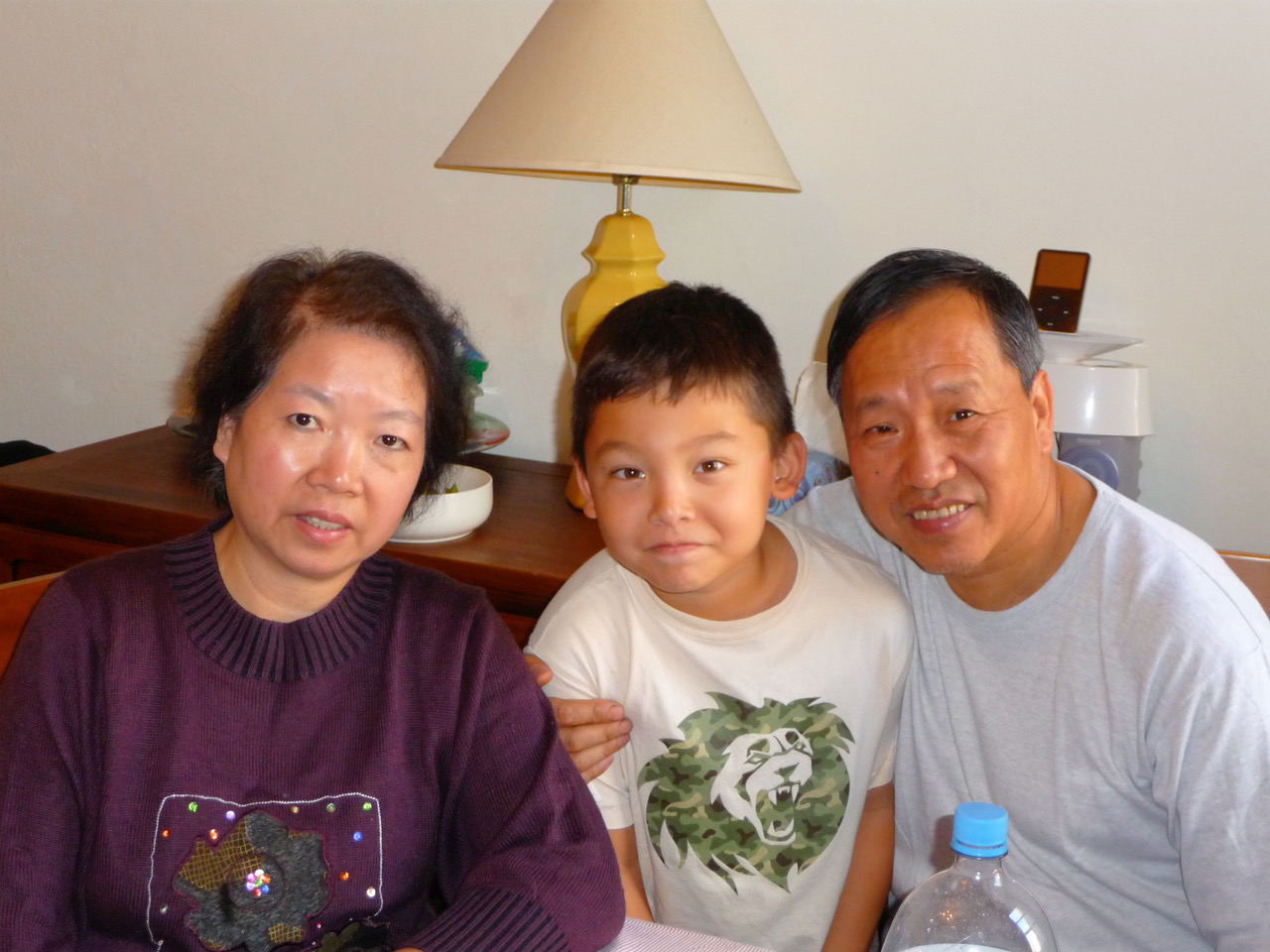 5-year-old Matteo N. Wong '22 sits with his grandparents in his home in Brooklyn.
Advertisement
Advertisement

When Will He Learn Chinese?

I had imagined my first conversation with Nai Nai and Gong Gong dozens of times: Greetings, ask how they’re doing, say that I’m happy at Harvard. It would be slow and awkward; I’d stumble and ask them to repeat themselves; we’d all wear broad grins.
By Matteo N. Wong

I spent countless elementary school afternoons visiting or hosting my paternal grandparents. From our many meetings, I cannot recall any specific anecdotes; each episode curves into the same current, a shallow stream buoying hollow memories of Nai Nai and Gong Gong.

My father opens our door and I carry in Nai Nai’s unasked-for groceries, keeping my gaze fixed on the red “Hong Kong supermarket” plastic bags. After setting the dark green gai lan and red lychee on our kitchen counter, I shuffle down the corridor and back toward my grandparents. Their Fukienese reminds me of a chorus of woodpeckers.

Halfway between the kitchen and the still-open front door is my room. I hesitate, longing to retreat into a comforting barricade of bookshelves and action figures.

My eyes rest on my father’s flat, round face, waiting for his signal. He used to linger as Nai Nai and Gong Gong walked to the kitchen, making sure they were at a safe distance before nudging me forward and whispering, “Go hug your grandparents.” Now, faintly gesturing toward them with his head of graying hair is sufficient to remind me of my grand-filial obligations.

I continue shuffling across the frayed, flaxen-yellow carpet with sagging shoulders and a flat expression. First, I hug Gong Gong, glimpsing his thinning black hair and worn face. Then Nai Nai, her fuzzy sweater rubbing against my nose. Our arms are stiff, and the embrace is momentary.

Walking back to my room, I hear an utterance which, due to its familiar timbre and cadence, no longer requires translation: “When will he learn Chinese?”

I must have watched and heard Nai Nai and Gong Gong for longer than a few moments at the door. But without language I couldn’t — or was too embarrassed to — see and listen. I would like to write that I’m uncomfortable distilling years of interactions with my grandparents into so few words, but there was nothing to “distill”. These impressions, little more than fleshed-out stereotypes, were all I had before this summer.

Each visit trapped me in a positive-feedback loop of shame. Unable to speak with Nai Nai and Gong Gong, I avoided their eyes; the shame of not looking up caused me to flee to my room; guilt from hiding meant I couldn’t look their way during dinner. The shame always returned: five, ten, eighteen years of silence recurrently compounded into a single afternoon.

Most vividly, I remember imagining Nai Nai and Gong Gong’s thoughts and comments: “Why won’t he look up at us?” “Why is his smile so artificial?” “How is this our grandson?”

My father had a series of logical reasons for not having me learn Chinese. I would likely learn Mandarin instead of Fukienese, and my grandparents’ Mandarin isn’t great; Chinese afterschool classes are misery-inducing; what Nai Nai and Gong Gong have to say isn’t worth my time.

Upon coming to Harvard, the decision to study Chinese was finally mine. On the first day of Chinese class, under “Why do you want to learn Chinese?” on the new student questionnaire, I marked, “To speak with family/relatives.”

“They’re here!” my father shouted as the doorbell rang. I leapt up and tumbled down the stairs, freshly polished for Thanksgiving. After only 10 weeks of studying Chinese, I hoped to impress.

I grabbed the red grocery bags and hurried back up the stairs. When Nai Nai and Gong Gong entered the living room, my father gave me his familiar signal. Stiff, awkward hugs ensued. I offered to take their jackets — more accurately, I made a series of muddled gestures and mumbled “jacket” until they understood and handed me their coats.

Before I could leave, my mother walked over. “Say something to them.”

I had imagined my first conversation with Nai Nai and Gong Gong dozens of times: Greetings, ask how they’re doing, say that I’m happy at Harvard. It would be slow and awkward; I’d stumble and ask them to repeat themselves; we’d all wear broad grins.

Mired in the inertia of shame, I could not speak at the door as we hugged or while I took their jackets.

Doubts turned my voice into a whisper: I’d only studied Chinese for two months — what if my heavy, tripped-up tongue upset them even more? Could I overcome 18 years of silence with a few words, or would speaking with them be an exercise in self-indulgent repentance?

“你好,” I managed. Hello. My shoulders straightened and my eyes brightened. Neither Nai Nai or Gong Gong seemed to hear.

“Louder,” my mother encouraged. “They’re old.” I shook my head, thankful to have their coats as an excuse to walk to the closet and find at least minimal respite from my cowardice. My feeble attempt was sufficient to temporarily assuage my guilt and not whole-hearted enough to trigger my fears.

That afternoon, I discovered a different kind of shame. Before, I felt guilty for not being able to connect with Nai Nai and Gong Gong; now, I was guilty of refusing to speak with them.

Until I began learning Chinese, it was easy to imagine Nai Nai’s scornful thoughts and assign myself blame. She was an object, totally malleable to my imagination.

If I were to have real conversations with them, the dam between us would break, releasing a deluge: my voice in Nai Nai and Gong Gong’s ears, and theirs in mine. Instead of self-indulgent guilt, I’d have to deal with their words and disappointments, their love and my betrayal, their longings and my failures — not as they existed in my head, but as they existed in theirs. I’d be translated from a simulated neglectful grandson into an actual one.

Throughout the day, I was able to understand snippets — “Matteo needs to eat more,” “The weather is so cold”. Each was an opportunity to jump in, to show I hadn’t checked that box in September for nothing. I remained silent.

I spent nine weeks this summer studying Mandarin in Beijing. Each day we learned the equivalent of one week of Chinese at Harvard. I had told myself that not speaking with Nai Nai and Gong Gong was a confidence issue, and that two months of immersive Chinese would be an effective remedy.

We arrived at their house in Flushing, Queens on a Thursday afternoon. Gong Gong answered the door, wearing a wrinkled t-shirt tucked into old shorts. Once again, I mumbled “你好” to no effect.

My father walked away, ignoring my effort. My mother, who studied Mandarin in college, saved me.

“他会说国语,” she said. He can speak Mandarin. Gong Gong raised his sparsely-populated eyebrows and chortled, then turned to ask her if this were true — the language barrier was so ingrained in our relationship that asking me didn’t register as an option.

She told him it was true, that I had studied earnestly in Beijing, and that he should ask me about my time there. Before we could begin talking, Nai Nai came down the stairs. My mother repeated herself and backed away; Nai Nai, Gong Gong, and I began to speak.

The conversation marked a literal transformation in how I interact with my grandparents, yet it would be misleading to write that it felt like a dramatic break with the past — perhaps because there were no trembling words or touching gestures to denote whether our relationship had, indeed, reached a turning point.

We stood in an equilateral triangle, several feet apart from each other. My hands were in my front pockets, their arms at their sides; all were unmoving. They asked me how long I’d been in China; about the climate; about the food. They spent the rest of the afternoon mostly speaking with my father in Fukienese.

I expected a dam bursting into a cascade; after 18 years of drought, the river ran shallow.

But it was not dry. During high school, I had seen Nai Nai and Gong Gong perhaps once a season; during my first year of college, twice in total. They visited us twice more before I returned to college, averaging to one-and-a-half meetings per week. I remember each occasion and embrace: tight yet delicate, long and deep and suddenly, unlike the hundred hugs before, too brief.