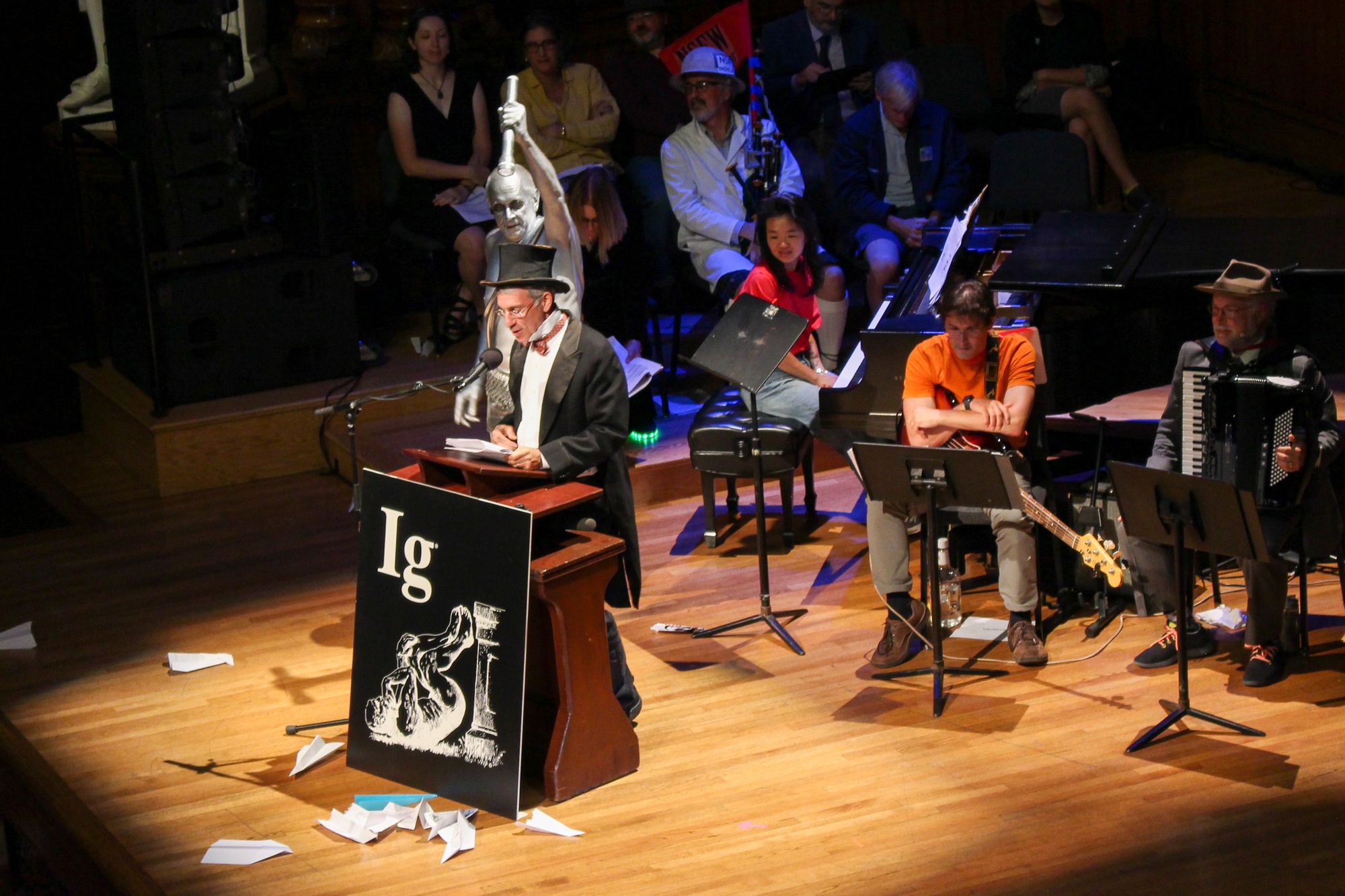 Ten Ig Nobel awards have been awarded every year since 1991. One prize awarded in 2019 for medicine advances honors the collecting of evidence that pizza might protect against illness and death. By Ryan N. Gajarawala
Advertisement
Advertisement

Jokes and Lab Coats at the Ig Nobel Awards

It was like witnessing a drinking game I didn’t know was happening — but still I wanted to be a part of it.
By Kate A. Moran

It was like witnessing a drinking game I didn’t know was happening — but still I wanted to be a part of it.

I’d never been to a party like this before. Gowns, laureates, and orchestral renditions of Bach may be the regularly scheduled programming for Sanders Theater, where I found myself on Thursday night. But tonight, for every gown there was instead a lab coat, and if you replaced the cello in Suite No. 1 with an accordion, then you would have the 29th First Annual Ig Nobel Prize Ceremony.

Organized by the Annals of Improbable Research — a bimonthly scientific humor magazine devoted to “genuine, improbable research” — the ceremony awards 10 Ig Nobel Prizes every year to honor “achievements that make people laugh, then think.” The 2019 Ig Nobel Prize ceremony featured real Nobel Laureates like economist Eric S. Maskin ’72 and physicist Jerome I. Friedman handing out awards to studies that conducted simultaneously groundbreaking and unconventional, research, ranging from the conclusion that “pizza might protect against illness and death, if the pizza is made and eaten in Italy,” to “studying how, and why, wombats make cube-shaped poo.”

The theme of this year’s awards was “Habits,” which inspired endless jokes and a four-part mini-opera, “Creatures of Habit.” Though the event functioned as award shows normally do, with an audience gathered to witness the presentation of trophies to a select group of people on stage, there was a casual ease underlying the night’s proceedings rather than a tense air of competition. Whereas Oscars envelopes are guarded by the Los Angeles Police Department before reaching the stage, Ig Nobel prizes were transported in a brown paper bag from Staples, and at moments the divide between the spectators and the honorees collapsed completely.

Any time someone on stage would say “bad habits,” audience members would woot or excitedly chant “HABITS!” I kept checking the program to see if there was a codified list of rules to this peculiar drinking game; I never found one.

Though Marc A. Abrahams ’78, editor and co-founder of the Annals of Improbable Research, acted as emcee for the awards, the real ringleader of the night was the sequined-tutu-clad Miss Sweetie Poo, an 8-year-old responsible for kicking winners off the stage if their acceptance speeches exceeded one minute. This happened a few times. Winners hastily gathered their papers and their prize — a branded coffee cup glued to a base and stuffed with a toothbrush, lottery tickets, a cigarette butt, and other “habits” — while struggling to maintain composure as a girl dressed like a ballerina yelled: “PLEASE STOP. I’M BORED.”

After the presentation of the final award and the conclusion of the last libretto, Ig Nobel prize winners shook hands with Nobel Prize winners on a stage scattered with paper airplanes. Their faces were lit by flashlights directed by “human spotlights,” covered in silver body paint. Abrahams took to the stage once again to thank the many featured performers and researchers, ending with: “If you didn’t win an Ig Nobel prize this year – and especially if you did – better luck next year.” It was the last of a series of inside jokes that I wished had been explained to me earlier.

—Magazine writer Kate A. Moran can be reached at kate.moran@thecrimson.com.