Of Monsters and Men Fight Darkness with Melody 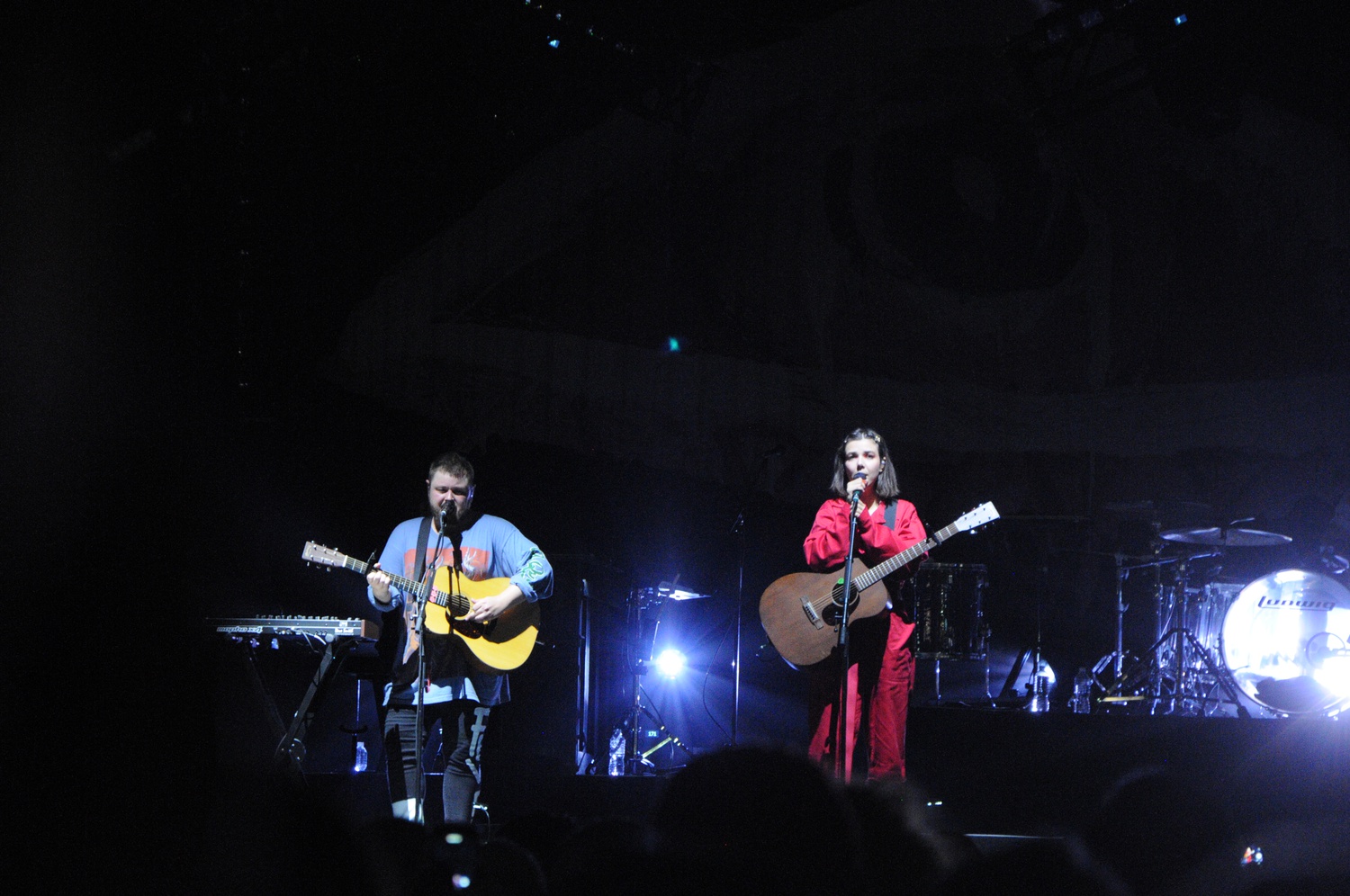 Over the course of 90 minutes at the Rockland Trust Bank Pavilion in Boston, the Icelandic indie band Of Monsters and Men delivered a life-affirming set with an impressive commitment to its lyrical roots in the face of sonic experimentation and heavy subject matter.

The set included 8 songs off of the group’s new album, “FEVER DREAM.” While lead single “Alligator” showcases a heavy, almost angry vocal display from co-lead singer Nanna Bryndís Hilmarsdóttir, the rest of the album alternates between anthemic, high-production tracks and slow, dark meanderings. “FEVER DREAM” presents a distinct sound from Of Monsters and Men, one that is a seismic change from their 2012 debut “My Head Is an Animal.” Indeed, the arena-like qualities of “FEVER DREAM”’s crescendos could not feel further from the debut, which exploded in popularity after a viral performance in co-lead singer Ragnar Þórhallsson’s basement.

When seen live, the nature of their music remains largely consistent across albums. Hilmarsdóttir and Þórhallsson alternated between acoustic and electric guitars as they reached for songs both old and new, but aside from a few synths heard during the “FEVER DREAM” tracks, the only real variation in their discography was audience reaction. Given that their newer tracks are less well-known and fairly moody, the cheers were never going to be as loud as for their early hits “Little Talks” and “Dirty Paws.” The group also indulged themselves by returning to the new album, even when it made for some jarring transitions. The shift from “My Head Is an Animal”’s “Mountain Sound” to the new track “Wars” played well since both songs are upbeat, but the set’s momentum slowed to a crawl during ballads like “Under A Dome.” Starting the encore with “Waiting For The Snow” — a meditation on fame that Hilmarsdóttir delivered on her knees at the edge of the stage — was a strikingly bold move that almost failed. But lyrics like “I used to make mountains / But then they grew bigger than me” made an indelible impact that showcased the band’s emotive power.

Unlike other bands with two singers of the opposite sex, Of Monsters and Men do not usually employ Hilmarsdóttir and Þórhallsson as romantic foils. Instead, their songs often focus on a much more intimate relationship between one and one’s self, often centering on depression. Sometimes this dynamic is told literally. In “Slow and Steady,” Hilmarsdóttir sings that “I’m letting go, but I’ve never felt better / Passing by all the monsters in my head.” Other times it is explained through metaphor. “Six Weeks” tells the story of Hugh Glass — the inspiration for “The Revenant” — but lyrics such as “Alone / I fight these animals” demonstrate the story’s deeper meaning as a struggle against mental illness. Set closer “Yellow Light” pits Þórhallsson as a will-o’-the-wisp leading Hilmarsdóttir off her path and into danger, urging her to “Just follow my yellow light / And ignore all those big warning signs.” And their debut owes its title to a line in “Dirty Paws”: “Jumping up and down the floor / My head is an animal.”

These songs deal with heavy topics despite their upbeat melodies, none more so than the band’s breakout hit “Little Talks,” which is either about a widow missing her husband (“I’ll see you when I fall asleep”) or a wife dealing with mental illness (“The screams all sound the same”), depending on the interpretation. It is not as if these themes went unnoticed: the audience sang along almost every word. Rather, Of Monsters and Men took the subject matter of many a dreary folk album and tackled it by crafting anthemic crowd-pleasers. This just might be the key to the band’s seven-year staying power. As pop music continues to get moodier (see: Post Malone, Billie Eilish, Drake, and counting), some people just want to have a good time.

In Boston, Of Monsters and Men provided just that. The Rockland Trust Bank Pavilion — the venue’s sixth name since 1994 — made a near-perfect venue for the occasion. Although there were seats, the audience stood immediately after the band entered. The amphitheater roof contained the sound and provided some interesting shadows of drummer Arnar Rósenkranz Hilmarsson. At the end of the set, the venue’s compact nature allowed Hilmarsdóttir to run through the entire crowd during the instrumental crescendo of “Yellow Light.” After making stops to thank her tech crew and avoid a rabid fan, she returned to the stage to chant and drum during the song’s climax. Diverted from her path both in lyrics and in practice, her triumphant return to the stage evoked a feeling that the group’s upbeat melodies in the face of danger are more than just a facade. They represent real hope — hope of victory against the darkness.

— Staff Writer Jack M. Schroeder can be reached at jack.schroeder@thecrimson.com.