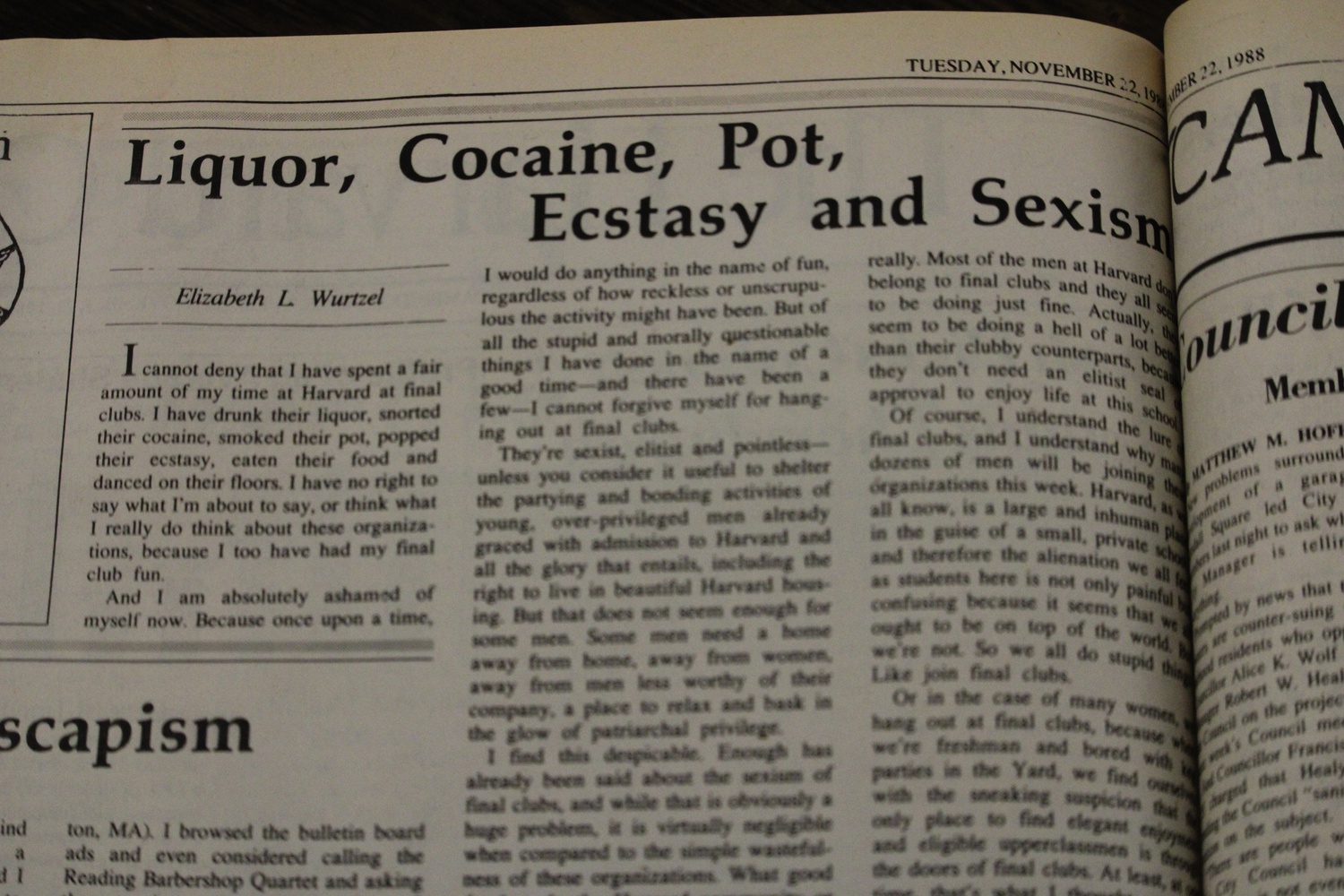 The writer Elizabeth L. Wurtzel ’89, whose audacious 1994 memoir “Prozac Nation: Young and Depressed in America” canonized her in the confessional genre, died of metastatic breast cancer on Tuesday. She was 52 years old.

Wurtzel was raised on the Upper East Side of Manhattan. She left what she characterized as an unhappy home to attend Harvard College, where she spent four drug-fueled years.

“I cannot deny that I have spent a fair amount of my time at Harvard at final clubs. I have drunk their liquor, snorted their cocaine, smoked their pot, popped their ecstasy, eaten their food and danced on their floors,” she wrote in The Crimson in a 1988 opinion piece about the sexism of final clubs. “But of all the stupid and morally questionable things I have done in the name of a good time—and there have been a few—I cannot forgive myself for hanging out at final clubs.”

Wurtzel eventually expounded upon her gritty undergraduate experience beyond The Crimson’s pages. She began writing “Prozac Nation,” the book that would eventually make her famous, while she was an undergraduate.

That unflinchingly candid memoir — originally titled “I Hate Myself and I Want to Die” — received mixed reactions when it was published in 1994, ranging from disgruntled to grudgingly beguiled.

Michiko Kakutani wrote in a New York Times review that, like Wurtzel, the memoir was rich with contradictions.

But aside from sex and drugs, Wurtzel was passionate about rock n’ roll, rounding out the triad of obsessions that defined many of her cohort.

Wurtzel wrote about rock for The Crimson while attending the College. In those pieces, her normally caustic tone softened into elegy.

“The album hits its peak when Reed assays the extremes of his emotional range,” she wrote in a 1986 review of a Lou Reed Album, which won the Rolling Stone College Journalism Award. “‘Temporary Thing,’ with its high-pitch backbeat and religious-chant vocals, delves into Reed's usual sphere of bad relationships, bad karma, and bad moods. It isn't pleasant, but it is pure and passionate, and it leaves us with Reed's optimistic message that even the worst of things is just a temporary thing.”

After graduation, Wurtzel wrote about music for the New Yorker. Eventually, though, a 1992 leadership transition marked the end of her column.

She then went on to publish “Prozac Nation,” which clambered to the top of the New York Times bestselling paperbacks list and carved out a literary niche for the confessional style.

Deborah Copaken ’88, whom Wurtzel befriended in college, wrote in an email to The Crimson that “confessional Liz” had a lasting influence on young female writers.

“She showed every great young female writer writing today that their experiences, as young women, matter and are worthy of narration. Look at Emily Gould, Jia Tolentino, name any young female writer you admire right now, and I can guarantee they either knew Liz personally, as she was always collecting them like beads on a string as friends, or they read her work and were moved to write their own words,” Copaken wrote.

Amanda S. Brainerd ’89, another Harvard friend of Wurtzel’s, wrote in an email that the writer’s legacy would last for generations to come.

“Liz was complicated — infuriating even, but her literary fearlessness and unapologetic obsession with herself created a new genre of memoir. Her impact will resonate for years; Liz was a brilliant and irreverent rule breaker,” she wrote.

Wurtzel’s lifelong friend Roberta F. Brzezinski ’89 described her former college roommate’s heroine status to many who knew her, and some who didn’t.

“She was a downtown icon. She could get a table in any and any restaurant in the Village — her and her dog would be there,” she said in a Friday interview. “But she’d always be wearing some t-shirt. She was really into t-shirts.”

Wurtzel followed “Prozac Nation” with “Bitch: In Praise of Difficult Women” in 1998 and “More, Now, Again: A Memoir of Addiction” in 2001.

Then, a change of pace: Wurtzel was admitted into Yale Law School in 2004. After graduating, she practiced law for a few years, but eventually turned back to writing.

“When I was ready to fall in love for real, I stopped behaving badly, and I met someone great, and great for me. I got better and my taste got better. My fiancé is smart and handsome and talented and decent. Everything about him is my favorite thing about him,” Wurtzel wrote.

“She didn't have her own children but she was a friend of her friends' children,” Brzezinski said. “She was a fearsome, loyal friend.”

Wurtzel announced she was battling cancer in a 2018 Guardian essay, confessional as ever.

“I am good in a fight. This one goes on for the rest of my life. But I have been fighting with myself in one way or another all along. I am used to it. I can’t think of a time when my mind or my body was not out to get me,” she wrote. “I am at ease with this discomfort.”