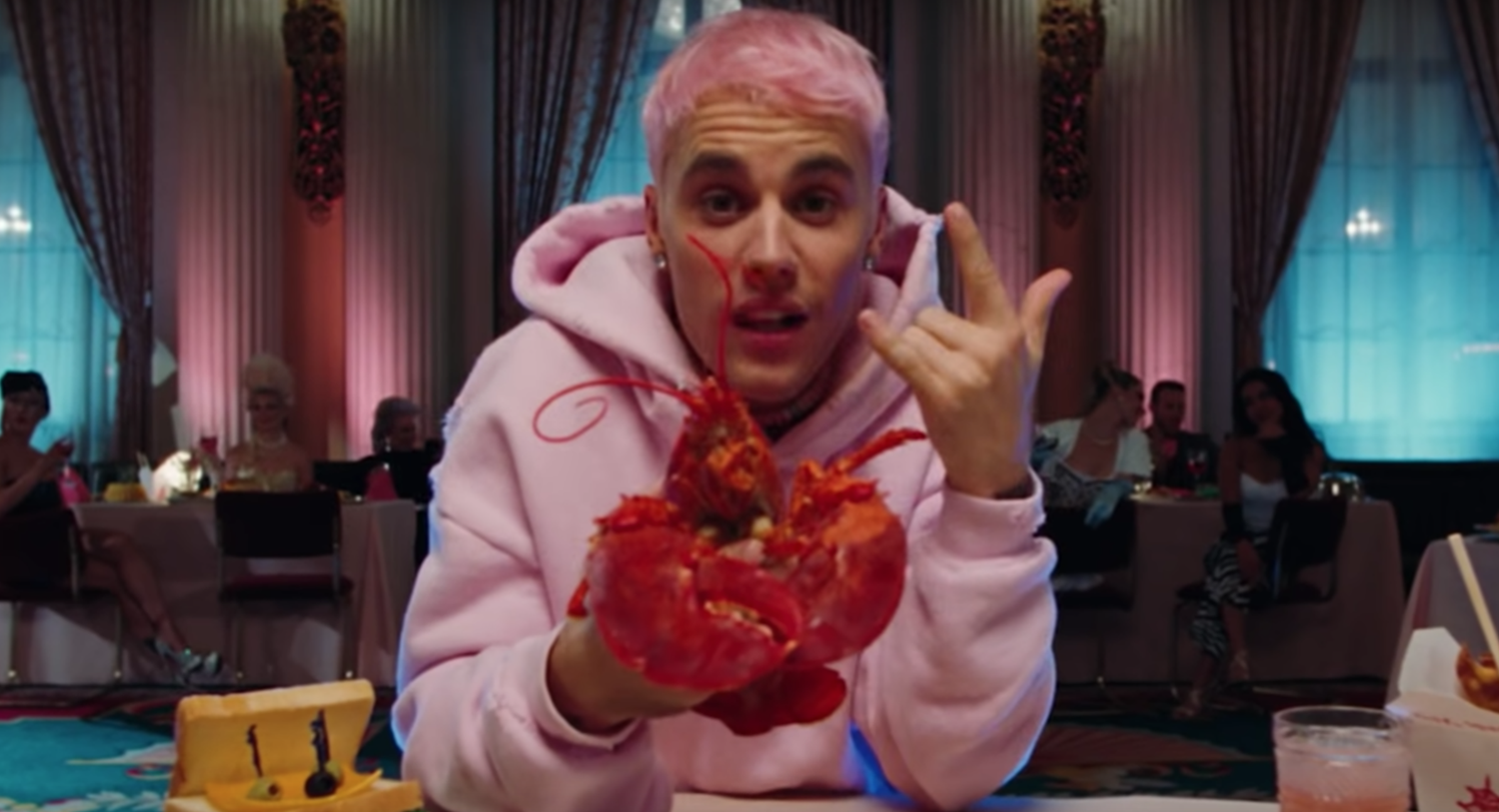 Justin Bieber holds a lobster in the music video for his new single, "Yummy." By Courtesy of Justin Bieber/Youtube/VEVO
By Cassandra Luca, Crimson Staff Writer

The singular good thing about Justin Bieber’s music video for his latest single, “Yummy,” is the rainbow of color atop gilded plates and pristine white tablecloths. Everything else — Bieber’s ridiculous posturing during a meal he shares with people who seem to accept their status as props, the lyrics, the garish food choices — is so subpar as to be reprehensible. “Yummy” will leave you longing for the days of “Baby”: At least back then, Bieber simply lacked the vocabulary to express the seemingly complex feelings he attempts to convey in this music video.

Bieber seems inexpressibly confident in his status as a hypebeast. He strolls into a large ballroom, sits down, eats very little of the vast quantities of food set in front of him, and waves his arms, pointing in a manner that should hype up a crowd. At various points, he gives the camera “come hither” eyes, which generates the opposite reaction. He regales the viewer with a sense of entitlement and boredom that he seemingly doesn’t care to hide — apparently he believes ennui endows him with raw sexual energy. It does not.

It seems, too, that face filters are no longer confined to still photography: In the video Bieber elongates his chin, inspiring frantic tweets and bewildered reactions, and enlarges his eyes to far beyond their normal size. Technically these alterations fit in with the general psychedelic theme of the video, but the effect is off-putting.

The food, of course, is the other large focal point of the video, as it ties in directly with Bieber’s near-hero worship of his subject’s “yummy-yum.” Is this an abstract general concept relating to his partner’s attractiveness, or is it a metaphor for oral sex? Both, it seems. Tying food to sex is nothing new, but the lyrics, “Yeah, you got that yummy-yum,” coupled with the near-garish details of the music video, will make viewers wish that they could both un-see and un-hear Bieber’s latest offering to the world.

It’s not that his lyrics are vulgar, per se. (Far worse exists out there.) It’s more that Bieber’s are so simplistic that anyone who can read between the lines and understand the metaphor should appropriately wrinkle their nose at why Bieber thought using food talk to describe sex would be a good avenue to travel down. Just as no woman has ever said that she fell in love with her future husband when he catcalled her on the street, it’s extremely unlikely that a woman listening to this will think, “ah yes, I feel sexy and appreciated when Justin talks about my ‘yummy-yum.’”

After witnessing some vaguely discomfiting shaking Jell-O, dance moves that make Bieber look like he is twirling pasta or doing the funky chicken, and the end scene in which he stares at the camera petulantly (didn’t he get what he wanted?), the viewer is spent. The video could have distracted from the embarrassingly poor-quality lyrics, and yet the video itself is a visual cacophony that provokes nausea. Some tribute to his wife, indeed.