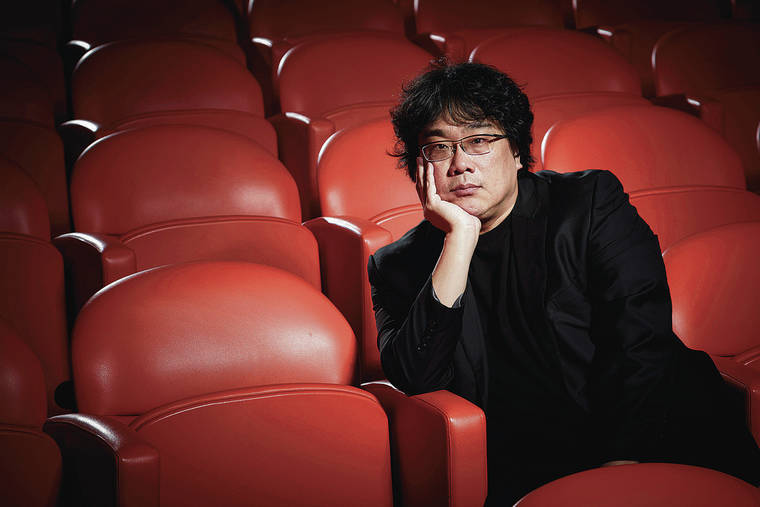 Visionary auteur Bong Joon Ho is up for Best Director at this year's Academy Awards. By Courtesy of the Associated Press
By Woojin Lim, Crimson Staff Writer

Bong Joon Ho, an acclaimed South Korean film director and screenwriter, has become a top-tier visionary auteur with a passionate cult following. The term “bongtail,” a combination of his name and ‘detail,’ has been globally embraced by cinephiles to describe his frame-by-frame attentiveness — the product of Bong’s meticulous, webtoon-like storyboards. An American commentator at the Cannes Film Festival wrote, “Bong Joon Ho has become a genre unto himself.”

Bong has inspired audiences to start watching and enjoying foreign language films through the universal language of cinema. “Once you overcome the 1-inch-tall barrier of subtitles, you will be introduced to so many more amazing films,” he said at the 77th Golden Globe Awards.

To celebrate the 100th year of Korean cinema, below is a list of the top five greatest Bong Joon Ho films of the past decade. Bong’s features combine hints of black comedy, uncanny genre-meshing, and wry social critiques of the current times in a way that dazzles audiences and revitalizes the promise of movies. All of the following films were written and directed by Bong.

This thrilling, hilarious, yet deeply unsettling film deserves a greater-than-top spot on this list.

Since its debut at the Cannes Film Festival, “Parasite” has won a number of accolades, breaking records as the first ever South Korean film to win the coveted Palme d’Or by unanimous vote. It burst the Tomatometer on RottenTomatoes, won at the Golden Globes and Screen Actor’s Guild Awards, and is now entering the 92nd Academy Awards with multiple nominations, including Best Picture and Best Director. Not only has “Parasite” received widespread international acclaim, but this film has become a defining cultural icon of our era.

It is a wily story about infiltration: A poor family scams its way into the lives of a rich family. It tells of class struggle and economic inequality, with a subtle touch of humor and irony. Beyond this angle, the film conceals Bong’s ambition to tell “metaphorical” stories about the decaying human condition. Bong describes “Parasite” as “a comedy without clowns, a tragedy without villains.” As for plot details, Bong has urged theater-goers to watch the film while knowing as little about it as possible. For that, I’ll keep you in the dark.

In Seoul’s Han River, a giant, carnivorous, mutant fish is borne out of American misconduct: A U.S. official commands a Korean lackey to pour toxic chemicals down the drain (a real-life incident that happened in Seoul in 2000, except for the mutant fish part).

One fateful day, the creature leaps outside of the waters, terrorizes the city of Seoul, and kidnaps the teenage daughter of a slow-witted young man named Park Gang-doo (played by Song Kang-Ho, who has since appeared in four of Bong’s movies and who plays the Kim family patriarch in “Parasite”). The Park family gathers to rescue Gang-gu’s daughter, and becomes riled up in a gut-churning, emotionally moving adventure involving government conspiracy, environmental pollution, and tight family bonds. Propelled by a wizardry of scary sequences and special effects, “The Host” was the first of Bong’s films to be played in mainstream movie theaters all over the world.

“Mother” is a poetic, heavy-handed masterpiece that centers on an unnamed widow, played by actress Kim Hye-Ja — known to South Korean audiences as an archetypal mother figure — whose mentally challenged adult son is implicated in the killing of a schoolgirl. The titular mother attempts to figure out the truth behind the murder, while struggling with intimate details of her and her son’s past. The film is known for its off-kilter opening sequence where Kim dances alone in a vast field of yellow grass with an empty, ominous look on her face, setting the tone for the rest of the movie.

“Memories of Murder” is a true-crime detective story based on South Korea’s notorious Hwaseong serial murders, the best-known cold cases in the country. Set in the mid 1980s when South Korea functioned under the rule of a military dictatorship, this film follows two abusive and incompetent police detectives who attempt to uncover the sexual assaults and brutal killings of multiple women. The signature feature is notable for mixing absurdly beautiful sequences of melancholia with biting political satire, launching Bong’s career as an internationally renowned auteur.

A week before “Parasite” opened in the U.S. this past October, a police official revealed that a South Korean man, a prisoner in his 50s, has confessed to ten of the unsolved Hwaseong murders, which had remained a dark stain in the nation’s collective memory. Though the killer could not be prosecuted as the 15-year statute of limitations had already expired in 2006, he is currently serving a life sentence.

Inspired by a French graphic novel, “Snowpiercer” is an action-packed dystopian train film with a stellar cast. Snowpiercer is the name of a high-speed train that zooms around the post-apocalyptically frozen globe. As the only survivors of humankind after a climate engineering experiment gone wrong, the passengers have become segregated by class, with the elite in the lush front cars while the poor are crammed into squalid tail compartments by armed guards. Chris Evans and Jamie Bell play members of the train’s lower class, and the film starts as they lead a rebellion against the train’s higher classes and advance forward.

“Okja” is a sci-fi refurbishing of the classic “Charlotte’s Web” tale — a young girl befriends a livestock piglet and fights for his life — to mirror a modern age of genetic revolution and multinational consumerism. With scenes spanning from largely naturalistic, bucolic mountaintops to hectic city centers in lower Manhattan, “Okja” delivers a scathing, overtly political statement on the repercussions that occur when humankind manipulate nature for their selfish, commercial ends.

Debuting on Netflix, this film included appearances from a gaggle of both English-language and Korean-speaking stars, including Tilda Swinton, Jake Gyllenhaal, and Steven Yeun. Playing scientific researchers, corporation executives, and animal rights activists, the cast battles over the eponymous digitally rendered super-shoat.