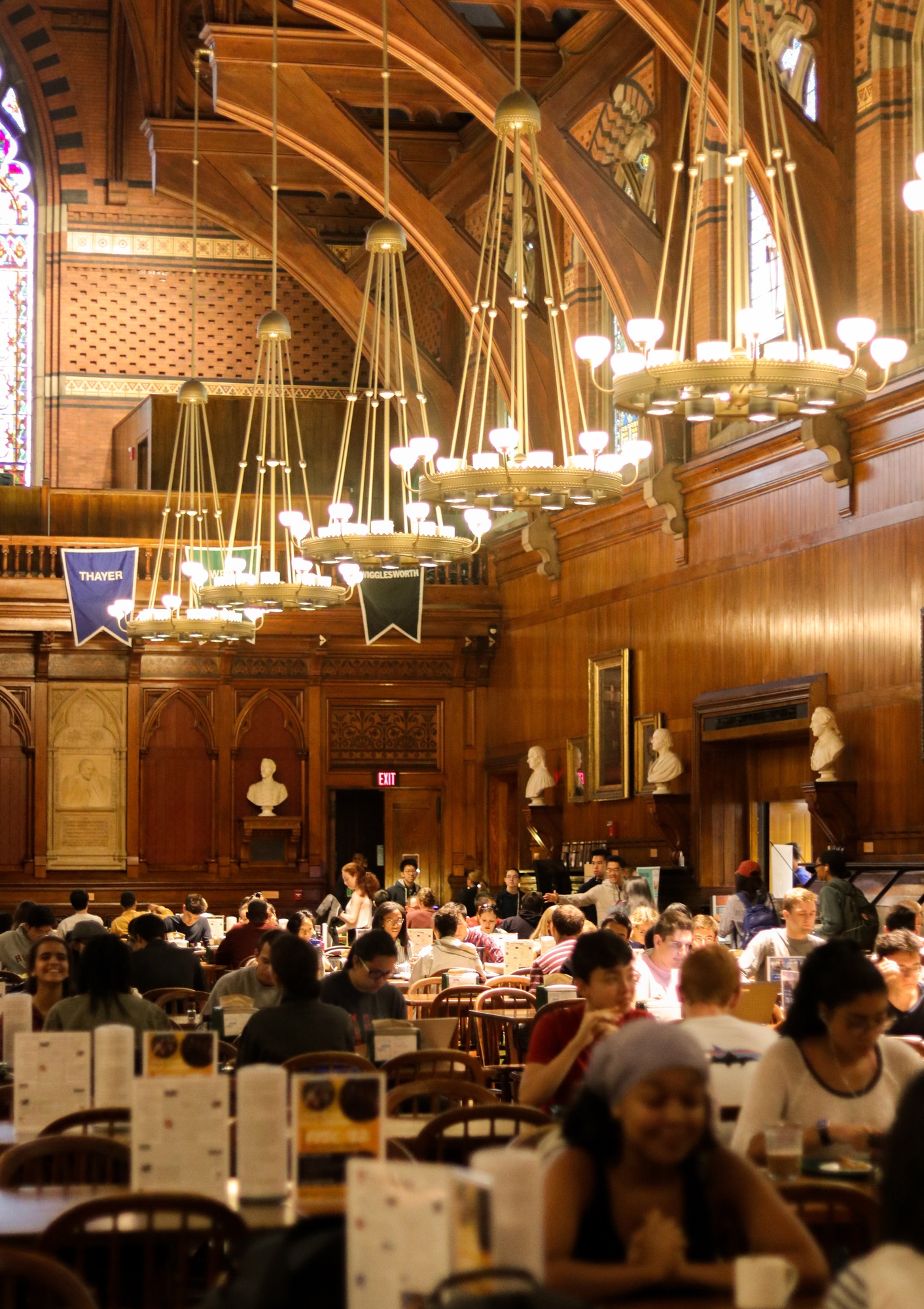 Behind the Bust of W.E.B. Du Bois

The painful contradictions of American history seem to be contained within this bust. What Hancock’s motivations or personal convictions were cannot be known, and perhaps remain the greatest mystery of this story. But it is clear that his role in sculpting both the bust and the monument at Stone Mountain raise a host of vital questions about what it means to commemorate, and how the ways in which we memorialize reflect the values of our society.
By Sarah W. Faber and James C. D. Quillen

Twenty marble busts look down onto vaulted Annenberg Hall, their physical position marking them as great figures of Harvard’s history. In the center of the wall to the right of the main entrance, sits the bust of W.E.B. Du Bois, the only Black person among them.

“Neil [Rudenstine] took the velvet hood off and everybody gave a standing ovation. I mean, many people cried. I thought it was just beautiful,” Professor Henry Louis Gates, Jr. remembers of the statue’s unveiling ceremony in 1993, which he and the late Reverend Peter J. Gomes led in Memorial Church. Gates still remembers the powerful symbolism of this ceremony when he goes “to Memorial Hall for Commencement dinner, and the president always speaks right under the statue of the great Du Bois.”

Yet this monument to one of the most important intellectuals and civil rights advocates in American history has a history of its own, one intertwined with white supremacy and the politics of visual representation today.

The Department of African and African American Studies commissioned the bust in 1993. At the time, the department only had three members: Kwame Anthony Appiah, Werner Sollors, and Gates.

“The first thing I proposed to the administration was that we honor W.E.B. Du Bois, the greatest Black intellectual in history,” Gates says. “There was no portrait, no photographs, and no sculpture.”

Du Bois, who lived from 1868 to 1963, was a prominent civil rights leader, sociologist, historian, professor, and writer. He founded the National Association for the Advancement of Colored People, the first African American to receive a Ph.D. from Harvard, and the author of several seminal pieces of literature in sociology and history.

“We got approval for the creation of a bust, and we wanted it to be a marble bust in a place of prominence,” Gates says. “We wanted marble because all the other figures are in marble in Memorial Hall. It didn’t make sense to have the one Black man in bronze. If we were going to honor him, it’s not like [busts] are representational in terms of color, but the likeness to Du Bois.”

Harvard appointed an independent committee to choose the sculptor. “I was hoping that the University would commission an African American sculptor, particularly Martin Puryear, but I was told I didn’t have the vote,” Gates says. The committee did not consult the members of the department. In the end, the committee selected Walker Hancock, a World War II veteran who had coordinated the safeguarding of French art during the Nazi’s invasion and had made busts of two Supreme Court justices.

“All I was told was that he had done a marble bust of Earl Warren, who was our hero because he was the Supreme Court justice when Brown v. Board was decided in 1954, and Warren Berger, who was more conservative,” Gates recalls. “Let’s say he wasn’t on our list of heroes, but, you know, it seemed fine.”

But it turned out that Hancock had worked on another project: the Confederate monument at Stone Mountain, Ga., which depicts Confederate President Jefferson Davis and Confederate generals Robert E. Lee and Thomas J. “Stonewall” Jackson. The Atlanta chapter of the NAACP — the very organization Du Bois founded — has called it “the world’s largest shrine to white supremacy.”

Former Georgia gubernatorial candidate Stacey Abrams drew attention to the monument in a series of 2017 tweets, writing, “The removal of the bas relief of Confederates from Stone Mountain has been a constant debate since the state bought the property in 1958. Paid for by founders of the 2nd KKK, the monument had no purpose other than celebration of racism, terror & division when carved in 1915.”

Hancock did not complete it until 1972.

In 1915, the Ku Klux Klan celebrated its rebirth with a cross burning at the top of Stone Mountain. Later that year Caroline Helen Plane, a charter member of the United Daughters of the Confederacy, hired Gutzon Borglum to sculpt prominent confederates into the mountain’s side.

By 1925, funds for the project were running thin, and Borglum was fired over a financial dispute. Claiming that the work was his property, he destroyed his models and escaped to North Carolina when the Association put a warrant out for his arrest. Two years later, he was hired to work on Mount Rushmore.

The Association sandblasted off the incomplete face of Lee that Borglum had carved. It finally hired Henry Augustus Lukeman to finish the project after many other sculptors declined their offer. But money remained tight. With the approval of Calvin Coolidge and the 1924 Congress, the U.S. Mint commissioned a silver half dollar (designed by Borglum) with the words “Stone Mountain” and engravings of Davis and Jackson on its face as a fundraiser for the monument. Fundraising was unsuccessful, and the project halted in 1928.

Lukeman’s partial carving remained largely untouched for the next 30 years. After Brown v. Board of Education ruled school segregation unconstitutional in 1954, Marvin Griffin declared his candidacy for governor, running on the promise to uphold segregation and finish the Stone Mountain carving. He fulfilled his promise, and in 1958, the Georgia state legislature approved a measure to purchase Stone Mountain and complete the monument.

Enter Hancock. Working from Lukeman’s models and unfinished carvings, Hancock chipped away at the project from 1963 until 1972. (Progress was revealed in a 1970 ceremony which Richard Nixon was scheduled to attend — he cancelled at the last minute out of fear that association with the Confederacy would hurt his chances of confirming G. Harrold Carwell to the Supreme Court. Spiro Agnew was sent in his place.)

To this day, the monument at Stone Mountain stands as the largest commemoration of the Confederacy in the country. And the question of how to view the bust of Du Bois in light of this is particularly salient given the seemingly irreconcilable contradictions contained in Hancock’s life and work. Robin E. Kesley, the FAS Dean of Arts and Humanities and head of the newly-developed Task Force on Visual Culture, said “knowing this about Walker Hancock changes my experience of the bust of Du Bois. Because everything I know about the conditions of the production of a work of art changes how I look at the work of art.” But for Kelsey, although this knowledge may give him a “richer understanding of the history of its making, that bust will still speak to me of W.E.B. Du Bois as it always has.”

The painful contradictions of American history seem to be contained within this bust. What Hancock’s motivations or personal convictions were cannot be known, and perhaps remain the greatest mystery of this story. But it is clear that his role in sculpting both the bust and the monument at Stone Mountain raise a host of vital questions about what it means to commemorate, and how the ways in which we memorialize reflect the values of our society.

Professor Gates closed with the thought that these questions should be discussed by students, faculty, and the Task Force on Visual Culture and Signage. “But,” he added, “I happen to think it’s a beautiful sculpture, and I have for the last 30 years.”