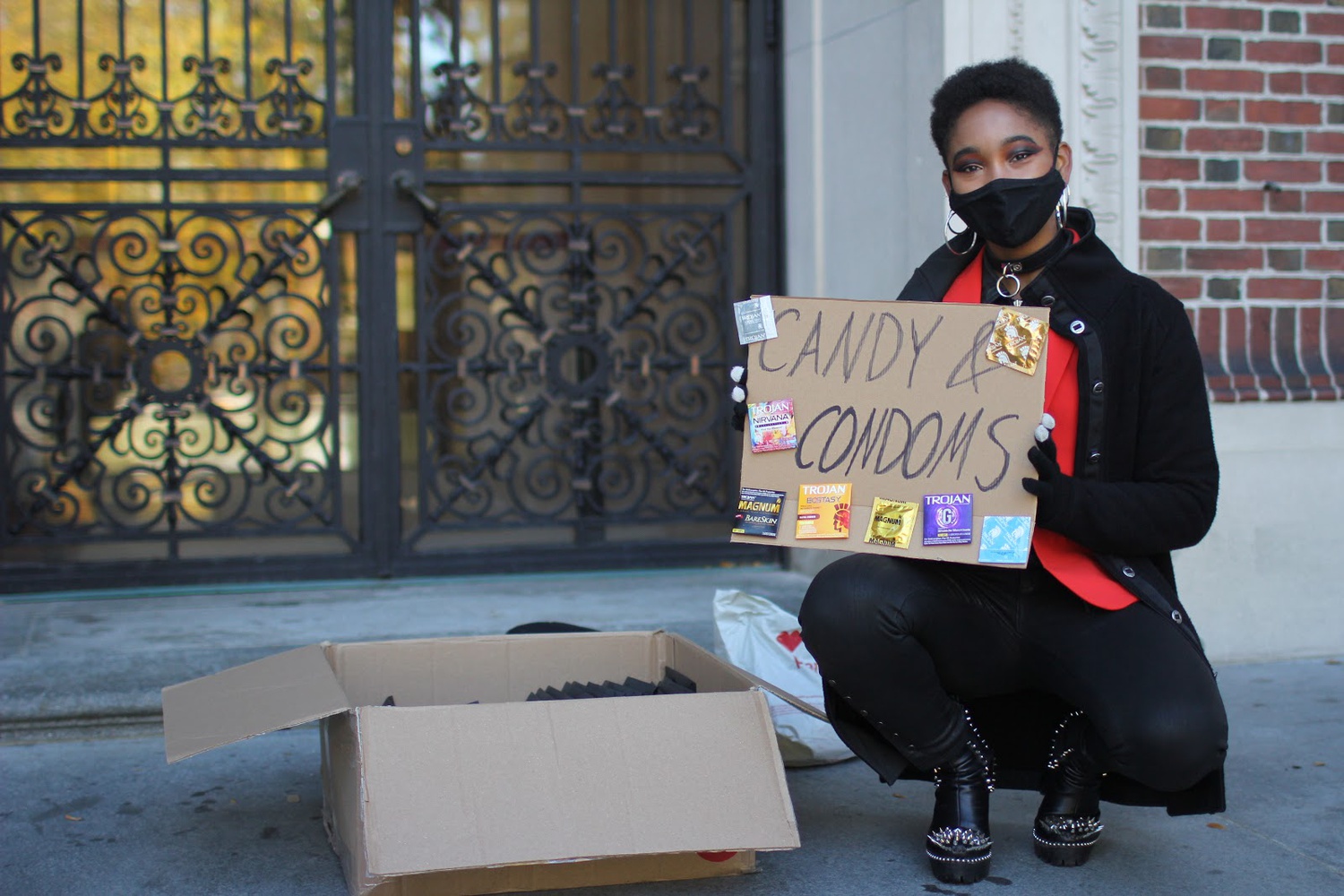 E. K. Smith ’24 hands out goodie bags full of candy and condoms at the top of Widener steps on Halloween. By Claire H. Guo
Advertisement
Advertisement

It’s Halloween, and Smith spends the next hour and a half handing out goodie bags to students, picking them out of the box and confidently striding down the iced-over steps in one-inch platform heels to meet new arrivals. Each goodie bag contains the usual items: candy, Halloween toys, and of course, four Trojan brand condoms.
By Claire H. Guo

E. K. Smith ’24 is running late. After hefting a box full of goodie bags to the top of the Widener steps, they sit down and hastily begin taping condoms to a piece of cardboard: Lubricated, Ultra Thin Lubricated, Stimulations Ecstasy Ultra Ribbed, Magnum, Magnum BareSkin, G, and Nirvana. They quickly scrawl “CANDY & CONDOMS” across the front of the sign in black sharpie.

It’s Halloween, and Smith spends the next hour and a half handing out goodie bags to students, picking them out of the box and confidently striding down the iced-over steps in one-inch platform heels to meet new arrivals. Each goodie bag contains the usual items: candy, Halloween toys, and of course, four Trojan brand condoms.

Back in September, Smith submitted an application to The Condom Collective, a collaboration between Trojan Condoms and the nonprofit Advocates for Youth that aims to distribute condoms on college campuses and advocate sexual health awareness. A few weeks later, a box of 500 condoms arrived at the mail center. For Smith, giving them out with candy on Halloween seemed like “a really fun way” to encourage safe sex practices.

“It was like going trick or treating on Halloween, and that was pretty awesome,” says Sarah P. McDonald ’24, a freshman who stopped by to pick up a bag. Later, she and her friends traded candy and condoms — there were seven different types, after all.

Each bag contains lollipops, Starburst, bubblegum, a plastic jumping spider, a temporary tattoo, and four condoms of different kinds. Smith purchased everything but the condoms, assembling 100 bags over the course of a few days. For McDonald, that extra effort helped make grabbing condoms a community activity. 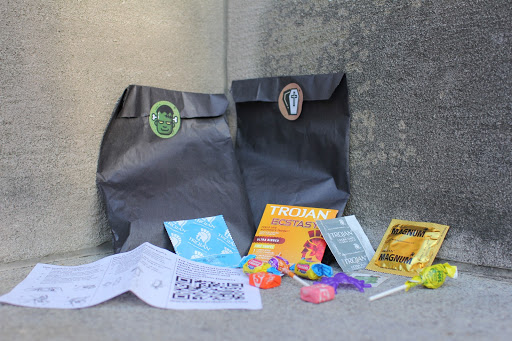 Around campus, McDonald noticed fellow students sporting Halloween-themed temporary tattoos. “People would put them on and you just know where they got the Frankenstein tattoo from,” McDonald says. “It was all over Snapchat; everyone had tattoos. So it was a community-binding thing. We bonded over condoms.”

Smith also typed up and printed out slips of paper explaining how to put on a condom, how to make dental dams out of condoms, and where to find more sexual health resources from Harvard’s Sexual Health Awareness and Relationship Communication Educators. Because high school sex education curricula vary widely, Smith thought including instructions could help fill any gaps in students’ knowledge.

“As far as the sex ed that I got in school, there definitely wasn’t any information about how to put on a condom, and the words ‘dental dam’ were never mentioned,” Smith says. “And also when I’ve talked to people, especially two people with vaginas who are having sex with each other, they don’t know that dental dams exist or they don’t realize that there is a risk of STI transmission. So it seemed really important to spread that awareness.”

Dental dams are thin sheets of latex used to reduce the risk of sexually transmitted infectionss during oral-vaginal and oral-anal sex. Smith points out that dental dams tend to be far more expensive and far less accessible than condoms, so they especially wanted to explain how to convert condoms into dental dams. (Snip off the tip and cut a line up the side.)

For Smith, handing out condoms with instructions felt like a natural continuation of their work in high school. In their freshman year, they revived their school’s defunct Genders and Sexualities Alliance group, making it a space for both advocacy and the discussion of safe sex practices. Smith says that BGLTQ+ advocacy and sexual health advocacy largely overlap, partly because of the HIV/AIDS epidemic’s historical legacy and its disproportionate impact on queer and trans communities.

“It’s become central to a lot of LGBTQ+ advocacy. If you go to any pride parade, you will leave with a bunch of condoms,” Smith says with a chuckle. “I think it’s been ingrained into the culture.”

In their junior year of high school, Smith founded the Central Texas GSA Coalition with the goal of providing social spaces and resources for BGLTQ+ students. When the nearby Austin Independent School District prepared to vote on a new third through eighth grade sex education curriculum — one that would include topics like sexual orientation, gender identity, and STIs for the first time — Smith mobilized the Coalition to support the policy change, organizing a press conference and testifying before the school board. Despite opposition and a decade-long struggle that preceded the decision, the school board voted unanimously in favor of the curriculum.

June K. Park ’24, a student on campus who also picked up a goodie bag, believes schools need to move toward a more inclusive sex education like the one Smith helped enact at AISD.

“Oftentimes, sex ed is taught in a very heterosexual blend,” Park says, which is “harmful for queer-identifying students” and “[normalizes] that heterosexual sex is the only sex possible.”

She was actually surprised to find that a student was even handing out condoms on campus.

“In my high school this would have never happened,” Park says. “This openness to talking about sexual health was just refreshing.”

That openness is exactly what Smith hopes to promote here at Harvard. They believe that talking about sex is the first step to lessening the harmful stigma surrounding it.

“The stigma around sex is why people don’t have access to sexual healthcare and the reason that people don’t feel comfortable asking questions,” Smith says. When people are not empowered to make sexual health decisions, they don’t make use of all the available tools to keep themselves healthy and safe, they explain.

“I personally don’t have a problem with being open and vocal and visible when it comes to sexual health awareness,” Smith adds. “Because I think it’s something that we as a society need to really destigmatize and be more open about.”