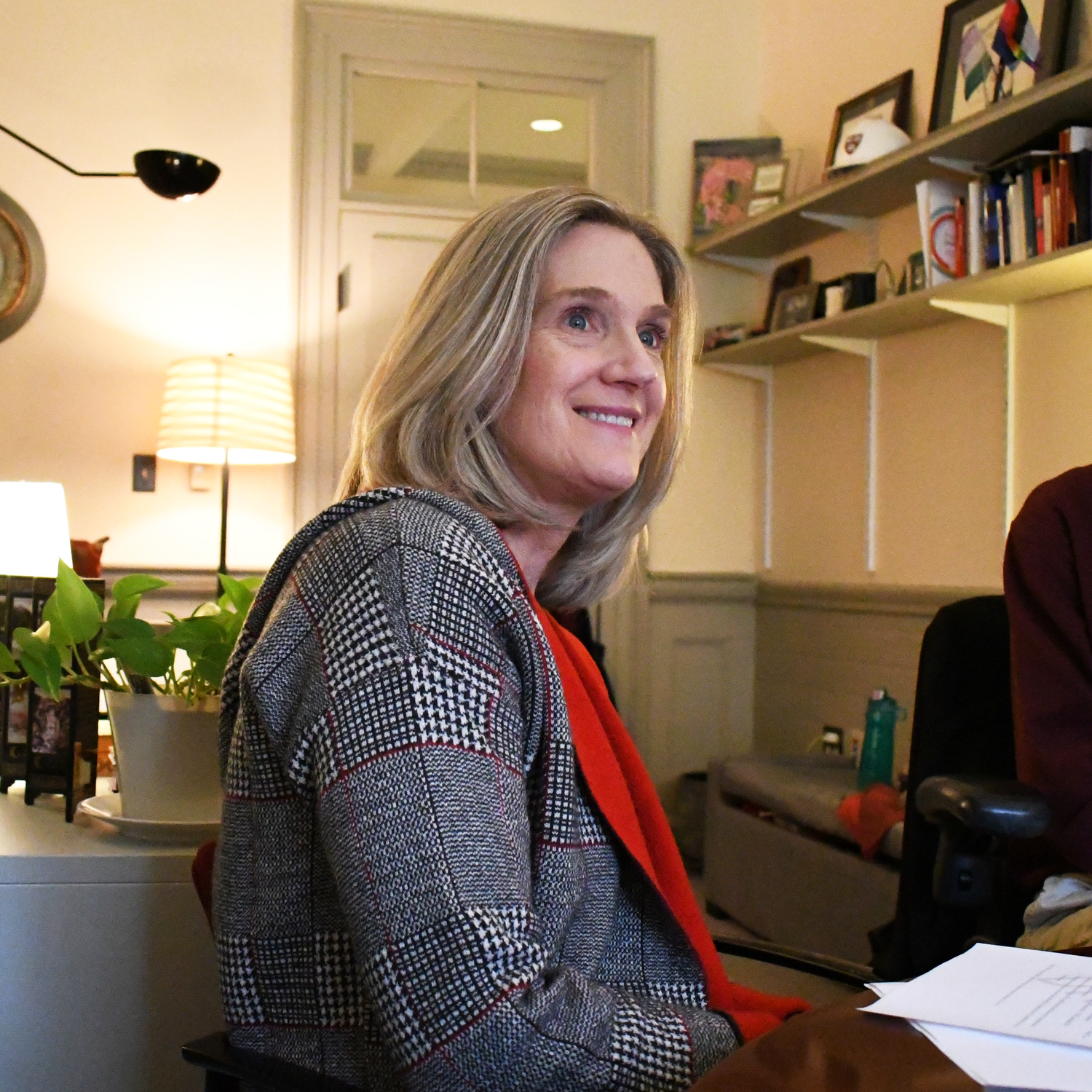 Dean of Students Katherine G. O'Dair, pictured here in a November 2019 interview, said Friday that the most common criticism she heard from students about the fall semester was a lack of communication about future developments, especially regarding the opening of common spaces. By Naomi S. Castellon-Perez
By Declan J. Knieriem, Crimson Staff Writer

With most students now departed from Harvard’s campus, Dean of Students Office administrators said in a Friday interview that, despite some snags, fall semester residential life turned out to be an overall success.

Dean of Students Katherine G. O’Dair said the most common criticism she heard from students was a lack of communication about future developments, especially regarding the opening of common spaces.

“Students have said it would be nice if you would have told us what was next or what was coming, give us a sense of what the possibilities would be, so we really have taken that to heart,” she said. “It all comes down to communication. We want to be able to communicate clearly with the students and to be as transparent as possible.”

Though O’Dair declined to comment on any specific planning for the spring semester, she said the DSO’s experience this past semester will help inform plans going forward.

“We are in our learning mode and whatever we have learned this semester we will apply to the spring,” she said.

DSO administrators also praised the role faculty deans played in residential life this semester, especially the five new pairs who will soon complete their first semester in the Houses. Alta Mauro — associate dean of students for inclusion and belonging — said the enthusiasm of the new deans invigorated her planning around diversity and inclusion.

“I was really excited to have some time with the new faculty deans and I understand them to be really eager to play an active role in creating and facilitating an inclusive community,” she said. “I was really impressed and excited about the conversations that we had.”

With a number of students staying on campus through the end of the semester, and some through the entirety of winter break, the DSO faces the challenge of supporting them through an isolating Cambridge winter. Associate Dean of Students Lauren E. Brandt ’01 described the rollout of support for remaining students as an “ongoing process,” but said student feedback will be continually incorporated throughout the break with support from house staff and the First-Year Experience Office.

“We are attentive to the fact that this is a different experience than years past because of maybe the smaller number of students who are going to be here,” she said.

DSO leaders also discussed the report commissioned by O’Dair and Assistant Dean Kate T. Colleran on the “comp” process in College extracurriculars. The comp is a process by which many student organizations choose their members. While some are education and instructive in nature, others function more as auditions or application processes. Professor Richard J. Light and a group of students at the Graduate School of Education first introduced the study to the Committee on Student Life in an October meeting.

According to both O’Dair and Light, the study and subsequent recommendations have been completed, with preliminary findings presented last Wednesday to O’Dair and Colleran. O’Dair said Friday that the study will be carefully considered by both the DSO and student leaders before deciding how to enact recommended changes.

“We will be very overt in how we receive the recommendations and act upon them, partnering together with the Undergraduate Council who also works very closely with all things student organizations,” she said.

The researchers interviewed more than 70 students, collected data from dozens of student organization leaders, and compared comping practices to those at peer institutions across the country, Light said in the Friday interview with The Crimson. Specifically, he said, they solicited feedback from students about how they would modify different comp processes.

“On one hand, people were critical,” he said. “On the other hand, almost everybody said make it into something constructive.”

Light’s team will present the full report and recommendations at a Dec. 4 meeting of the Committee on Student Life. O’Dair declined to comment on how the DSO will take the recommendations under consideration until after the findings are presented.