In Retrospect: A Strange Love (for 'Dr. Strangelove') 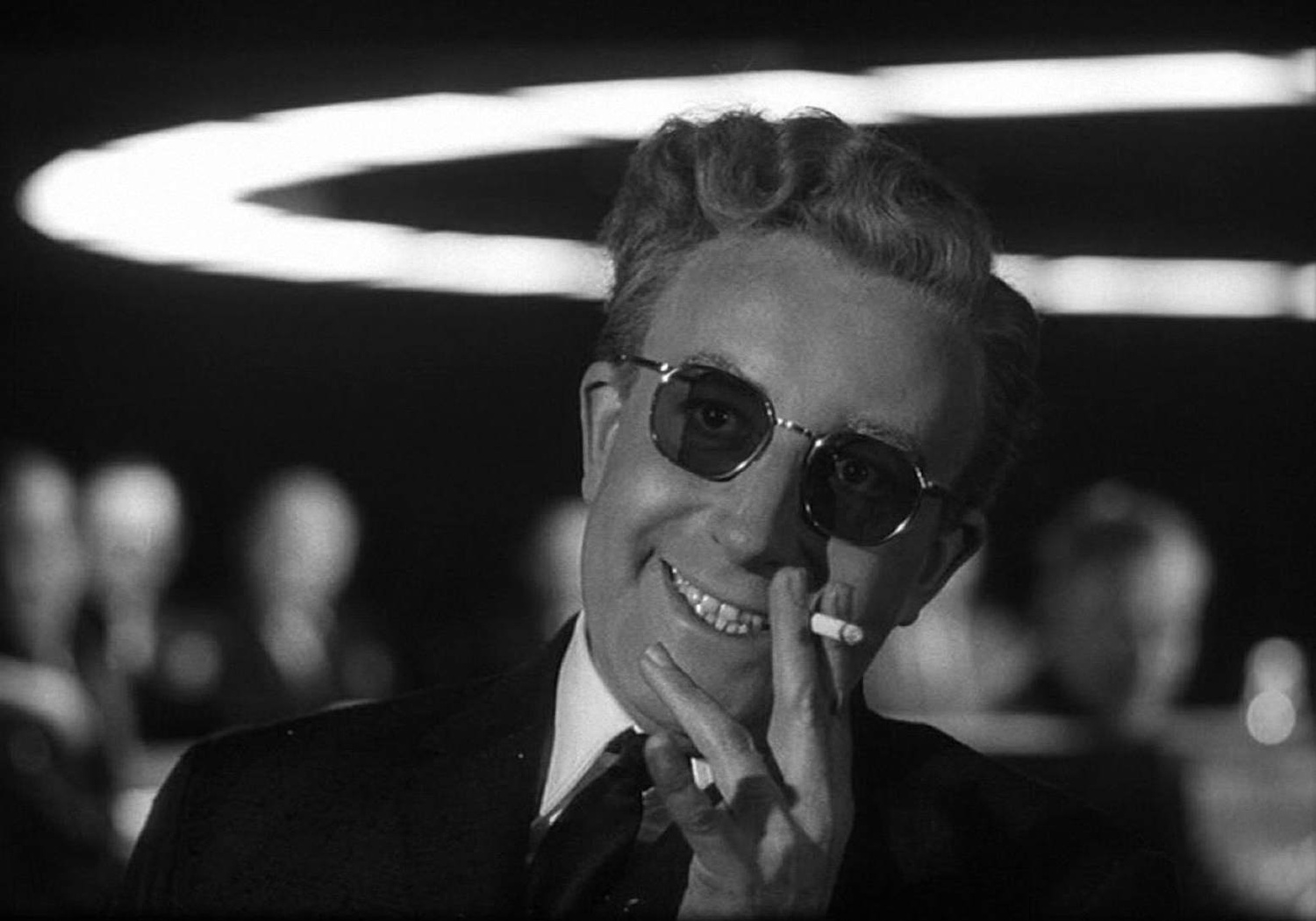 Peter Sellers stars as the titular Dr. Strangelove in "Dr. Strangelove or: How I Learned to Stop Worrying and Love the Bomb" (1964), directed by Stanley Kubrick. By Courtesy of Columbia Pictures
By Lance R. He, Contributing Writer

Although it was released almost 60 years ago in 1964, Stanley Kubrick's film “Dr. Strangelove” is still downright absurd today. The characters are crazy, the theories are wild, and the spectrum of jokes land across the Big Board. Yet behind its facade of sheer lunacy, “Dr. Strangelove” is dreadfully sane — and even tugs at heartstrings you didn't know existed.

Following deranged United States Air Force Brigadier General Jack Ripper's (Sterling Hayden) deployment of his bombing wing, “Dr. Strangelove” becomes steadily more chaotic. The POTUS, Merkin Muffley (Peter Sellers), attempts to prevent the fleet of hydrogen-bomb toting B-52 bombers from reaching their targets. Initially, he demands General Buck Turgidson (George C. Scott) to recall the planes, but after failing to do so, he warns Soviet Premier Dimitri Kissov of the incoming attack. However, all hope appears lost when Soviet Ambassador Alexei de Sadeski (Peter Bull) spuriously reveals the existence of their Doomsday Machine, an “automated and irrevocable” system of nuclear bombs that would blanket the entire world in radioactive holocaust.

At its worst, the black comedy genre is as satisfying as a wrapped stick of gum. Both aim audiences at a specific outcome: Either a sweet strawberry-flavored release, or a dark thematic catharsis that comes with gut-splitting entertainment. Done poorly, this thematic catharsis never comes to surface — the "essence," as Gen. Ripper would say, is denied. A crudely-executed black comedy not only fails to be humorous, but with that shortcoming, it also loses its ultimate purpose. Either an actor delivers the line crooked, the doom isn’t sufficiently dreadful, or the funny man simply doesn't make you laugh.

“Dr. Strangelove,” though, like Premier Kissov’s voice over the hotline, comes through just fine. Kubrick finely whips lampooning social commentary into an otherwise plain Cold War subtext. In nearly every scene, Kubrick openly declares dramatic irony through staging and dialogue. Take the Strategic Air Command's motto, “Peace is Our Profession,” which ostensibly decorates the interior and exterior of Gen. Ripper's Burpelson base. Below these motto-filled signboards, heated firefights break out as U.S. Army troops are deployed in an operation to secure Burpelson and revert Ripper's order. What's even more ironic is that the only casualties of a “shooting war” in the film come during this heated infiltration, which itself is self-defeating to peace.

Kubrick cleverly infuses this deadly irony to show what happens when communications are obstructed. Fundamentally, the tragedy lies in dialogue being lost in translation, which begs the question: Who do you blame? What's ironic is that many of the maladapted situations that play out in the film (such as the misused hotline between President Muffley and Premier Kissov) could have been easily avoided with proper considerations and equipment. However, Kubrick does not romanticize the War, nor does he downplay its terrifying implications. By creating caricatures of the foolish men with power, Kubrick effectively trains the viewer to his own visions on society itself: people with power are out of touch with reality and will destroy us all. Gens. Ripper and Turgidson literally embody this madness, perpetuating radical claims. Ripper fiercely purports his self-formulated Communist conspiracy of fluoridation of American waterways, delivering the ultimate sap of essence. Turgidson, toying with unsubstantiated casualty figures of a nuclear war, claims a coordinated preemptive strike limits retaliation to a “modest” 20 million Americans killed. As the grown men begin to brawl in the War Room, Kubrick, too, wrestles with a world gone M.A.D. to cogently warn of blind trust in the system, one which might cause your unheeded demise or might abandon you in a deep, dark mine shaft.

While the terrors of the Cold War have largely subsided since the release of “Dr. Strangelove,” Kubrick's unsettling imagery, which suggests the inevitability of nuclear war, can still strike fear into one's heart — even today. Up until the end, Kubrick sharply saturates “Dr. Strangelove” with conflictory emotions of joy and panic, or of patriotic fervor and vexed hatred. Although its excessive signaling at first deters, “Dr. Strangelove” wears on you as its fallout envelops the mind. While Vera Lynn's “We'll Meet Again” plays in soothing chorus, choreographed shots of nuclear explosions fill the screen: When we meet again, my dear friend “Dr. Strangelove”?