The Good, The Bad, and The Awkward: Faculty and Students Reflect on a Virtual Fall Semester 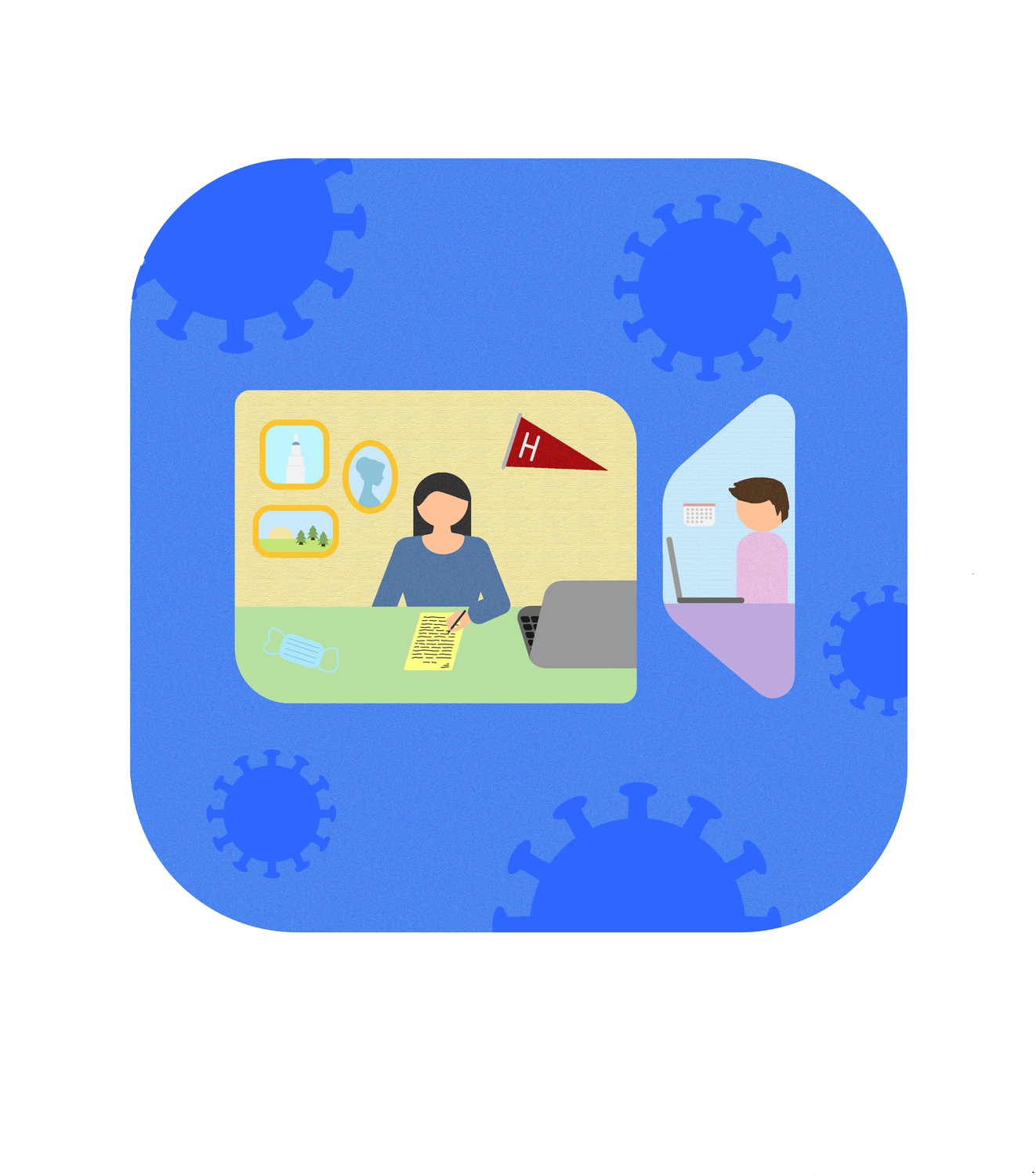 When Mechanical Engineering Design lecturer Michelle H. Rosen was considering how to adapt Engineering Sciences 51: “Computer-Aided Machine Design” to a remote format this fall, she knew her students would not be able to get the hands-on experience she typically builds her class around.

Normally, students in the course work in a machine shop to build robots, which will play a game at the end of the semester. With students scattered around the globe, Rosen had to find a new way for students to apply their skills.

Rosen said class staff mailed students an initial kit with materials and manufactured parts that the students designed during the semester to allow students to do the final assembly and testing themselves.

Like Rosen, thousands of Harvard faculty and students adapted their teaching and learning to a remote format this year due to the coronavirus pandemic. As Harvard College wrapped its first-ever fully virtual term Dec. 19, The Crimson asked multiple faculty, students, and administrators to reflect on the Zoom-facilitated remote semester.

While many expressed mixed feelings about the learning quality, social interactions, and in-class engagement they experienced this semester, they noted that both students and faculty are doing their best in a challenging environment.

Dean of Undergraduate Education Amanda J. Claybaugh, who led Harvard’s fall planning committee on the remote learning experience, wrote in a Dec. 1 email to The Crimson that the fall semester was “both hard and good.”

While the University’s decision to abruptly de-densify its campus in the spring gave little time to shift to virtual learning, faculty spent the summer making numerous adaptations to their courses, some of which clicked with students and others of which were met with less enthusiasm. While students and faculty said they would like to see certain aspects of remote learning stick around for the long term, there are other aspects which they said they will not miss after returning to the classroom.

Lessons from the virtual fall will carry on to the upcoming spring semester, which Harvard administrators confirmed this month will also be held fully online.

Adapting to a Virtual World

While most courses do not require the level of in-person work that Rosen’s Machine Design course does, other faculty have also had to make major adjustments to their instruction modes due to the Zoom format.

Daniel T. Gilbert, who teaches Psychology 1: “Introduction to Psychological Science,” wrote in an email that he found it difficult to shift from the typical in-person lecture style that he has employed in teaching the class for nearly 20 years.

Still, he wrote that he took advantage of Zoom to invite speakers who would not have normally been able to come to Cambridge to chat with his class.

“Each week, my students read sections of a popular book in the behavioral sciences (e.g., Freakonomics, This is Your Brain on Music, The Fear Factor, Blindspot, and so on) and then the author of the book joined us on Zoom to be interviewed by me and my students,” he wrote. “A dozen or so truly amazing authors appeared in our virtual classroom this semester.”

Other instructors modified the format of their classes. George Soroka, who serves as the Assistant Director of Undergraduate Studies for the Government department, said some classes in his department, particularly those which are traditionally larger lectures, experimented with “flipped classroom models.”

“You have 20 to 30 minute videos that you’re supposed to watch for homework and then you come into class and it’s not you sitting there listening to me or some other lecturer drone on for two hours but, rather, you have more of a Socratic discussion between the instructor and the students,” Soroka said.

The shift to Zoom, in addition to changing instruction method, also affected the deadline structure of some courses.

Philosophy professor Bernhard Nickel said he has made the deadlines in his course titled Philosophy 3: “The True and the Good” more flexible.

This semester, he is allowing students to submit papers without late penalties, but students must submit the prior paper and receive feedback in order to turn in the next essay.

“The only thing that incentivizes students to still try to stay with the deadlines that I set — as a way of guiding them through what I think is a good rate of work — is I do ask my students to write cover letters on their assignments where they describe what they learned from the feedback,” Nickel said.

About half of his students submitted papers according to the original deadlines, he said.

‘Office Hours in My Pajamas’

Although the shift to remote instruction was born out of necessity, some of its features will likely be kept in the future.

Students and professors alike focused on one main feature — Zoom office hours — as the largest benefit of the remote semester.

“Both last semester and this semester, I've seen way more utilization of my office hours, just because there’s so little friction in coming to a professor’s office hours as compared to having to walk across campus to the office,” Nickel said.

Rumi M. A. Khan ’21, a teaching fellow for Mathematics 18A: “Multivariable Calculus for Social Sciences,” agreed that Zoom eases barriers to lead and attend office hours.

“Normally I’d have to wear three winter coats,” he said. “Now office hours are certainly a lot less costly — I can just go to office hours in my pajamas.”

Director of Science Education Logan S. McCarty, who teaches General Education 1029: “What is Life? From Quarks to Consciousness,” said the virtual format has also expanded the time range for holding office hours.

“I could have office hours at nine o'clock at night and that's not a big problem, whereas it would be impractical to do that on campus,” he said.

McCarty said that, even when Harvard returns to in-person learning, he will continue to hold “some sort of office hours” virtually.

Office hours were not the only benefit McCarty noted. Since students were not able to conduct lab experiments this year, many science classes used online simulations in their place, which McCarty said might actually bring better results than in-person experiments.

“Students are more willing to explore and be creative in some ways with an online simulation, because they're not worried about blowing something up or destroying a piece of equipment or injuring themselves,” McCarty said.

McCarty is not alone in considering maintaining aspects from the virtual semester even after students return to the classroom — Claybaugh wrote that more than 70 percent of faculty have said they will “bring back with them some tool or teaching technique that they learned while doing remote instruction.”

“I think overall that’s a positive thing that’s come out of this experience: we’re all thinking more about how to integrate various elements of technology better into our teaching,” Soroka said.

‘People Have Just Checked Out’

Though faculty and students said they appreciated some aspects of the virtual setting, they also said they believe Zoom can never fully replace the in-person experience.

“Giving lectures on Zoom is almost as painful as listening to them, so this year I had my students watch recordings of my lectures offline,” Gilbert, the psychology professor, said.

Khan, the math teaching fellow, said he coined the term “The Law of the Zoom Breakout Room” to describe a particular weakness of Zoom. Discussion occurs only in breakout rooms of very small numbers of students, he said, making it difficult to meet new people.

“As soon as you hit like five or six [students], it's just silent and nobody will want to say anything,” he said.

Khan also said he believes the shift to Zoom instruction eroded feelings of connection at the College.

“I just don’t think it’s useful or really that easy to capture big social events that are meant for socializing and fun,” he said. “Some people just don’t care about the community anymore — I think people have just checked out.”

Nickel, who teaches philosophy, said he is concerned online education will speed up an already existing phenomenon: the adjunctification of higher education in the United States. This trend is seeing universities become more reliant on adjunct faculty for teaching, rather than tenured professors.

“Those are faculty who have term-limited appointments, who might only have a one year appointment, maybe a three year appointment, but there’s no path to tenure or any other kind of job security where you can, for instance, be pretty sure that for the next 10 years, you’re going to be in the same place, which is really disruptive if you’re trying to raise a family,” he said.

Asked about Nickel’s concerns in a Dec. 3 interview, Dean of the Faculty of Arts and Sciences Claudine Gay said FAS continues to hire tenured faculty at levels it can maintain given current financial constraints.

Students’ thoughts on Zoom mainly turned negative when asked about socializing using the virtual platform. Chung Y. “Chuck” See ’22, who lived in Adams House for the fall, said he found it more difficult to make friends with other students in classes than it would have been during a regular semester.

“Being Facebook friends, or hitting them up over the Zoom [direct message] is kind of different from making friends with them in real life,” See said.

Shraddha Joshi ’24, who spent the semester at home in Texas, felt similarly.

“I don’t really think that I have made any close friends via the Zoom environment,” she said. “It’s awkward, and it takes a lot of effort to reach out to people and constantly talk to them outside of the environment where you usually see them if that’s a class or an extracurricular.”

Joshi only had one compliment for Zoom.

“I really like the new Zoom filters — that is one thing I appreciate,” she said. “Other than that, I’m a little tired of Zoom.”

—Staff writer Austin C. Ma can be reached at austin.ma@thecrimson.com.