Creature Features: The Harvard Art Museums are Reaching out to Kids 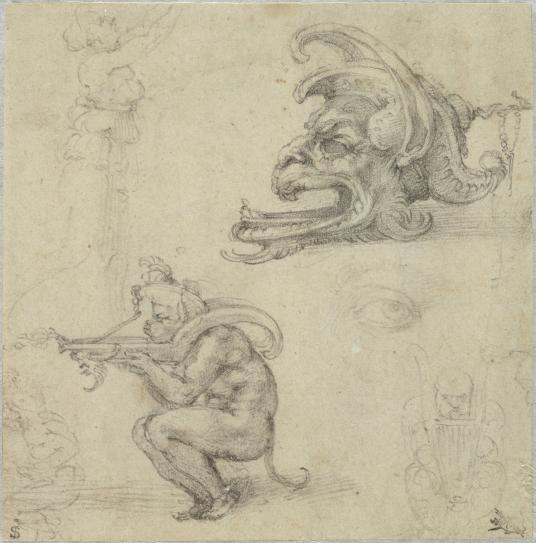 The Harvard Art Museums’ staff continues to foster arts appreciation within the greater community, despite the challenges caused by the coronavirus pandemic. While the brick and mortar museums are temporarily closed, the Harvard Art Museums have expanded their online presence, broadcasting an array of virtual art talks on Zoom. “Creature Features” is just one of these new online series, but there’s one thing that sets it apart from the rest: “Creature Features” is geared towards families with children aged six and up.

During a “Creature Feature” talk, museum staff discuss works of art from the Harvard collection that depict magical creatures. At “Fantastic Beings by Michelangelo,” the most recent “Creature Feature,” curators Margaret M. Grasselli ‘73 and Joachim Homann walked the viewers through an analysis of a 1521 drawing by Michelangelo Buonarroti entitled “Goldsmith’s Designs, Including Two Ideas for an Oil Lamp.” The drawing, conducted in black chalk on beige antique laid paper, consists of several independent sketches laid out on the same page. Two of these sketches are much more developed and detailed than the others. One is the head of an imaginary goat-like beast, and the other is a profile of a crouching humanoid figure. After a methodical inspection of the drawing, Grasselli and Homann revealed that the two prominent sketches are in fact ideas for oil lamps. They then showed an oil lamp of similar design, titled “Lamp in the Form of an Ass’s Head,” that was made around the same time that Michelangelo had made this drawing.

When asked about preparing for the “Creature Feature,” Grasselli responded, “It was quite a challenge to adapt the presentation to a younger audience and to avoid using art history terms and specialized vocabulary.” But although the discussion led by Grasselli and Homann was geared towards younger audiences, it was not oversimplified — an adult would still find the talk interesting and educational. Grasselli went on to disclose, “I have heard from a number of adults who attended that they enjoyed the program precisely because we explained things in a way that they also could understand and appreciate.” That’s what makes “Creature Features” special.
When asked about “Creature Features” after the event, Melissa A. McCloskey, a mother of two boys, said, “The people who ran the event made it very relatable to kids. They equated the Michelangelo drawings to monsters, and that’s what kids relate to. It never got boring.”

Throughout the art talk, Grasselli and Homann paused to ask questions to the children in attendance. Before delving into an analysis of “Goldsmith’s Designs,” Grasselli opened up to the Zoom attendees, saying, “I wonder if you might share with us what your favorite thing is to draw,” prompting responses like “fish” and “flowers.” Questions like this one helped to keep kids focused throughout the “Creature Feature.” Grasselli brought the kids into the lecture so that they felt a part of what was being discussed, and so that they could relate to the Michelangelo drawing at hand.

At the end of the Zoom event, Grasselli asked the kids to design their own creature lamp and share it with the Harvard Art Museums online. Not only did the “Creature Feature” expose young children to art history, but it also encouraged them to be active in the arts community and start drawing. This sentiment was expressed clearly by Joachim Homann, when he said, “I think we all should be drawing more.” “Creature Features” are not just about studying artists of the past — but creating the artists of the future.

“Creature Features” are free, and offered once a month on Saturdays at 10am on Zoom.