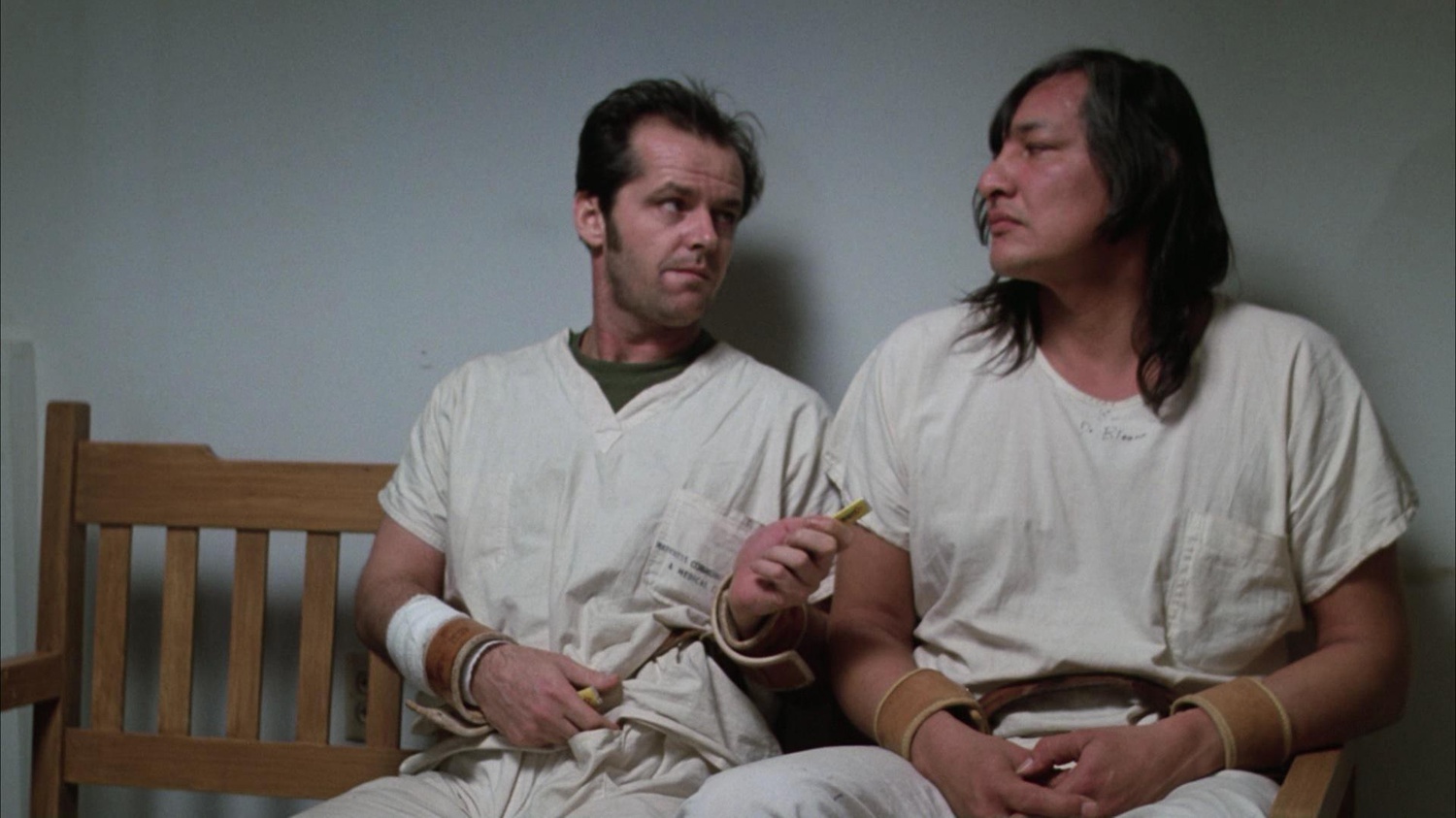 Jack Nicholson (left) stars as Randle McMurphy and Will Sampson (right) stars as "Chief" Bromden in "One Flew Over the Cuckoo's Nest" (1975), directed by Miloš Forman. By Courtesy of United Artists
By Emmy M. Cho, Crimson Staff Writer

If anybody has the Midas touch, it is Jack Nicholson.

One of Hollywood’s finest, the three-time Academy award winner has paved an enduring legacy for himself by grace of an unparalleled sequence of arresting performances. What renders Nicholson’s contribution to “One Flew Over the Cuckoo’s Nest” so remarkable is his uncanny ability to portray moral ambiguity. It is impossible to discern whether Randle McMurphy — the film’s protagonist — is melancholic, amused, or furious at any given moment. Even as a delighted McMurphy galvanizes his fellow residents to rebel against the institution’s tedious rules, there exists a deeper, more opaque emotion underneath his ecstatic exterior.

The construction of such a cryptic protagonist presents a rare moment in film. Often, we evaluate stories based on their ability to draw the viewer into the confines of a character’s psyche. Ingenious screenwriters can effortlessly convey the most compelling vulnerabilities of their characters.

With McMurphy, however, there is no vulnerability save the absence of wanting to be vulnerable. Time and time again, the young sociopath resists the siren song of sentimental honesty in the face of anybody, even himself. The only character that McMurphy is remotely bone fide towards is Chief Bromden (Will Sampson), a Native American patient who feigns mental illness to be left alone at the institution. Perhaps McMurphy’s most euphoric moment is when he realizes this.

“Here. Want some gum?” McMurphy asks, extending a pack of Juicy Fruit towards his stoic-faced friend. Bromden accepts, muttering a soft “Thank you.” It is the first and last time McMurphy appears genuinely surprised throughout the film.

Critically, this moment of pure surprise does not arrive when McMurphy wakes to realize he has missed his final chance of escape, but when he stumbles upon the humanity of another individual navigating the same, dehumanizing system. What is assumably so heartening to McMurphy about Bromden’s sanity is the fact that Bromden has outsmarted the very institution designed to disenfranchise him.

“Well, you sly son of a bitch, Chief,” a wide-eyed McMurphy says. “Can you hear me too?”

The exchange is as hilarious as it is heartbreaking. There is something so foundationally wrong about the scene, both in its visual and thematic presentation: two intelligent, cognizant human beings dressed in starched white gowns and sitting on a bench outside the very room where they will be subject to electrotherapy.

What differentiates “One Flew Over the Cuckoo’s Nest” from other American greats is its ability to refuse answers. No doubt Miloš Forman’s directorial masterpiece is a scalding criticism of not just disastrous mental asylums, but the entire American institution. No question the film illuminates the institution’s alarming power to brand anybody they choose as manic or undeserving of societal dignity.

The film also dares to raise subtle hypotheticals instead of providing clear cut answers to Forman's questions of the role of the American institution. What if McMurphy had successfully escaped? Would he have inflicted terrors onto society stoically and unapologetically, or would he have lived a decent life?

Note that the Academy of Motion Picture Arts and Sciences — the very awards that have helped to immortalize the film — is one of the country’s most enduring institutions. It would also be remiss to say that “One Flew Over the Cuckoo’s Nest” and “Silence of the Lambs,” two of three films to win all five major Academy Awards, wrestle with the paradox of human mania.

45 years have passed since the sensational premiere of one of America’s most celebrated motion pictures. To this day, “One Flew Over the Cuckoo’s Nest” refuses to yield to the decades, refuses to bend its relevance to the modern world. If anything, the film stands taller and prouder, as the years race by: Its enduring heartbeat can be heard louder than ever before.