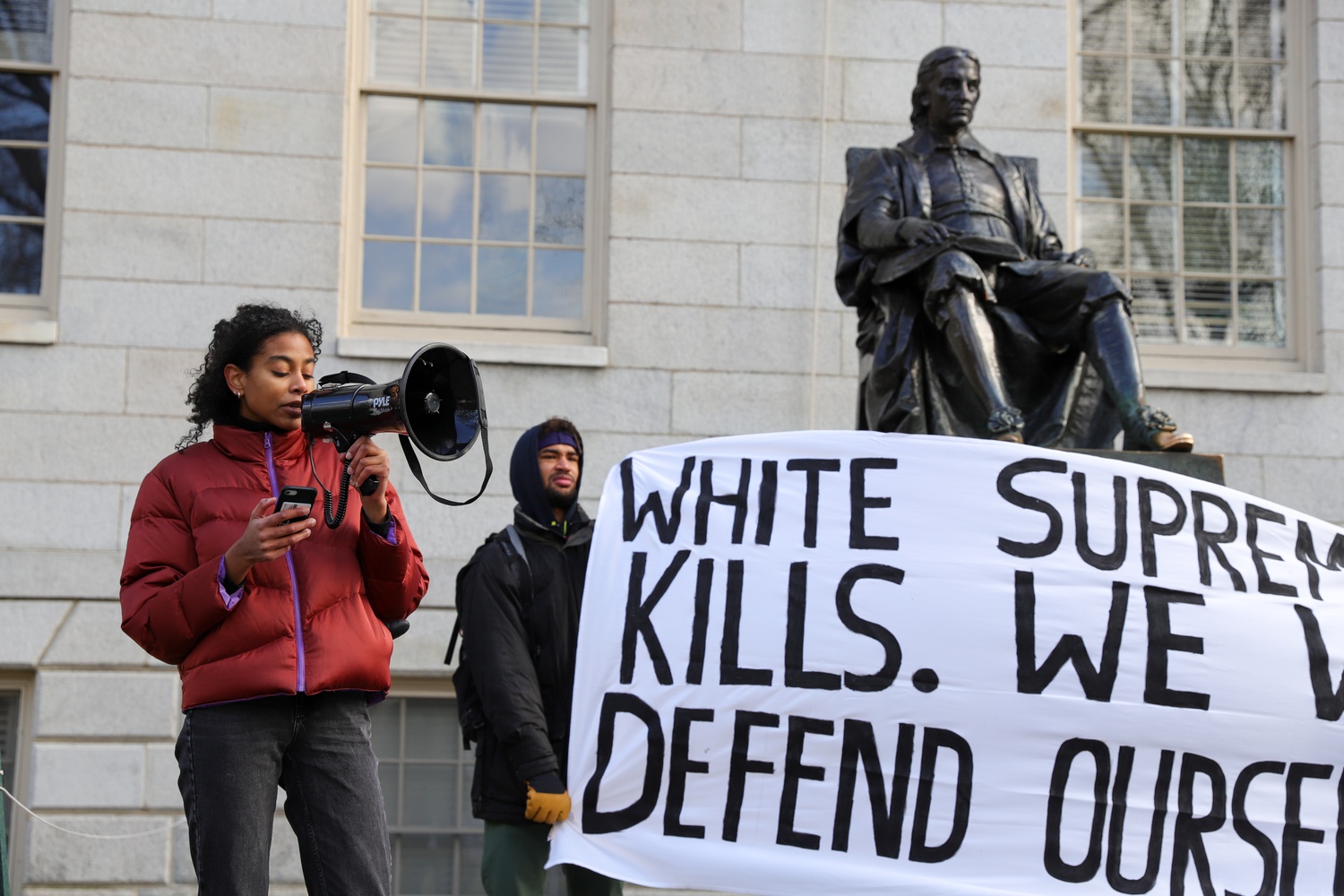 A week before the protest, The Crimson published an investigation into Harvard’s police force that found repeated instances of racism and sexism in the department over the span of nearly three decades. Lawsuits, discrimination complaints, and interviews with current and former officers painted a picture of a department divided over instances of racism and sexism and alleged favoritism and retaliation.

Those who voiced their concerns in the department held Riley — who has headed Harvard’s police force for a quarter of a century — responsible for what they described as a toxic culture in the department.

Brandishing signs that read “Abolish HUPD, End Discrimination,” “White Supremacy Kills. We Will Defend Ourselves,” and “Policing is Violent,” protesters chanted slogans such as “No Justice. No Peace. No Racist Police.”

Protestors demanded an end to the alleged harassment they said they have experienced by Harvard police officers and called for Riley’s removal.

“The Harvard University Police Department is committed to providing a safe and secure campus through quality policing and treats all persons with dignity and respect,” he wrote.

Hopkins told the crowd that The Crimson’s investigation was not news to her. She alleged that there was a connection between the instances of racism and sexism found within the department’s walls and the way HUPD polices students on campus.

“The Crimson article that was released last week only confirmed our suspicions of the racism, sexism, xenophobia and prejudice that is embedded within HUPD,” she said. “We are here because we are tired of the harassment. Tired of the tension in our chest when we see an armed officer. Tired of having to defend ourselves. Today we demand disarmament and an end to the tireless harassment of students of color. We are demanding that Francis Riley resign.”

In a speech also given on Saturday afternoon, Ethnic Studies Coalition member Cecilia A. J. Nuñez ’20 alleged that HUPD officers and officers from the Cambridge Police Department discriminate against students of color.

She said that police from both departments have increased their presence on campus to monitor student activists, many of whom are people of color. Nuñez alleged that she has seen an increase in plainclothes HUPD officers monitoring events and said she has also noticed CPD officers “called in at alarming rates.”

CPD spokesperson Jeremy Warnick wrote in an email that the basis of CPD’s presence at rallies is to keep both protestors and the public safe.

“In the event that we become aware of or are requested to assist with any planned or formed rally or protest, our primary goals are two-fold: to ensure protestors are able to safely exercise their first amendments rights and that public safety is maintained,” he wrote.

To Nuñez, this alleged increase in police presence evinces Harvard’s belief that minority students are “a threat.”

“The University sees its students of color as a threat and a population to be controlled. It is no coincidence that the heightened police presence comes at a time of increased activism and public visibility of students of color on campus,” she said. 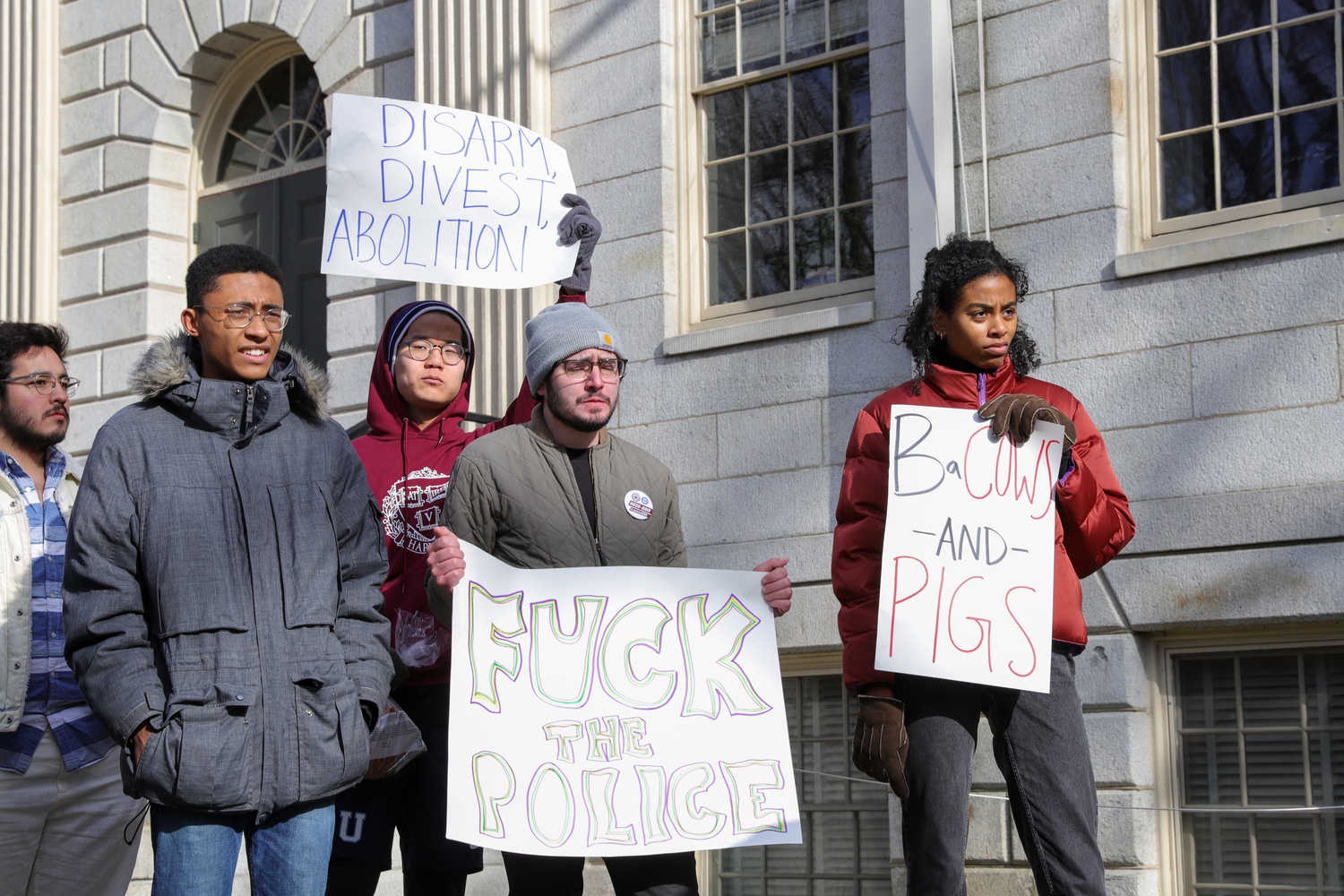 Fraught relationships between students of color and police on campus are neither new nor unique to Harvard, Nuñez said. She related interactions between Harvard affiliates and HUPD and CPD officers to the broader relationship between police and minorities across America.

“At the same time that we are seeing an increase in the policing of Harvard students of color, black and brown communities across the country are facing police brutality, surveillance, and fear,” she said.

Nuñez also spoke about CPD’s arrest of a black Harvard student in 2018, which touched off allegations of police brutality at the time.

“Students at Harvard are still reeling from the violent attack of a black student by Cambridge Police Department in 2018 and the recent reports of sexism and racism currently taking place in the Harvard University Police Department,” she said.

Asked to respond to allegations regarding the 2018 arrest, Warnick referred to the independent review of the arrest, led by former Chief Justice of the Massachusetts Supreme Judicial Court Roderick L. Ireland and released in May of 2019, which found that the officers involved did not use excessive force.

In an email sent to HUPD employees on Tuesday, Riley wrote that he “will be moving forward in the near future” with an internal review of his department following the recent report of racism, sexism, and alleged favoritism in the department.

This review would mark the fourth formal assessment of HUPD during Riley’s tenure.