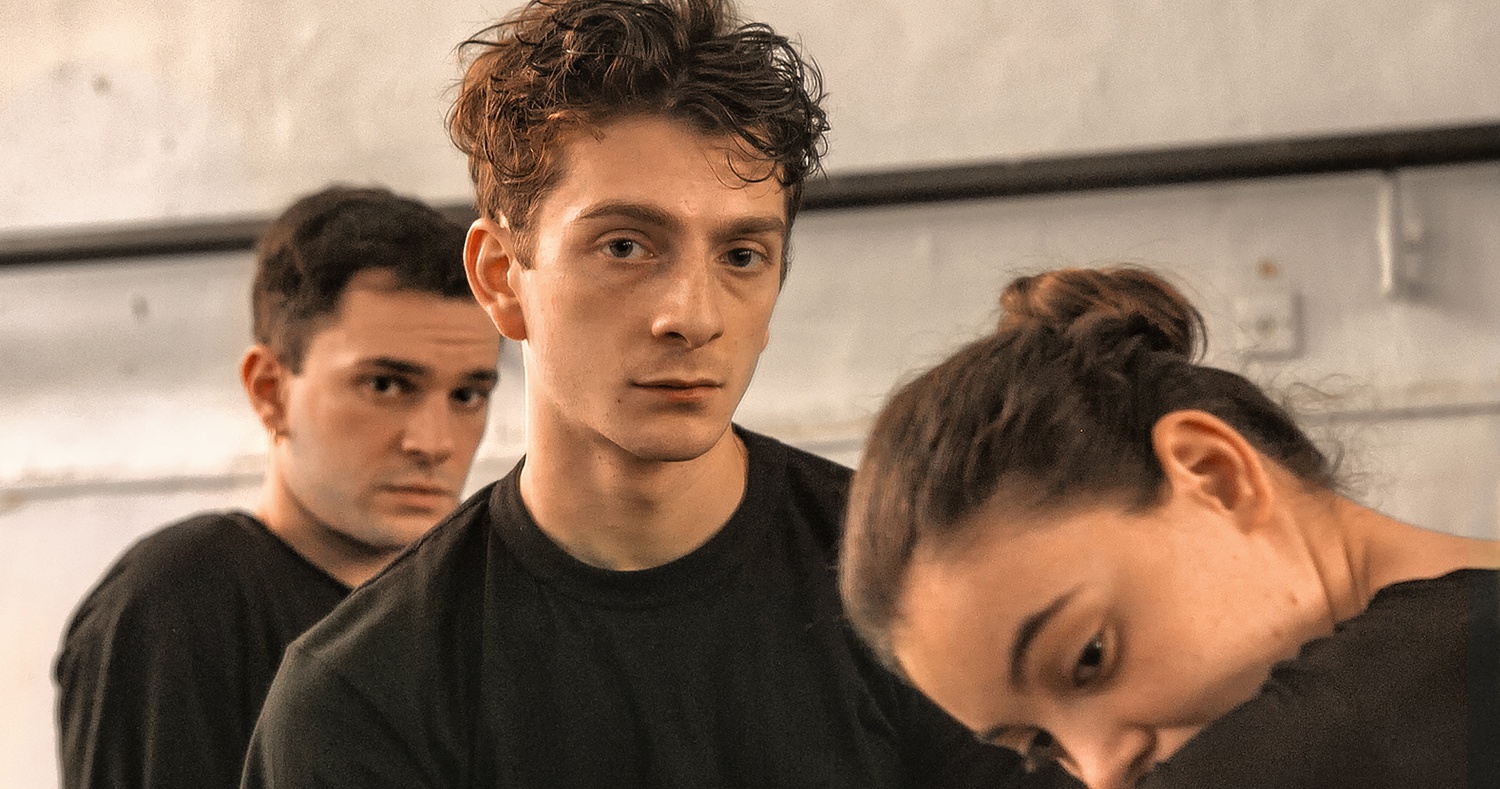 Bachi Valishvili (left) stars as Irakli and Levan Gelbakhiani (right) stars as Merab in "And Then We Danced" (2019), directed by Levan Akin. By Courtesy of Music Box Films
By Gabriella M. Lombardo, Crimson Staff Writer

In his third feature film, “And Then We Danced,” director Levan Akin struck gold: After a 15 minute standing ovation at Cannes, the indie darling was decorated at festivals from Odessa to Sarajevo. Although Akin’s native Sweden selected the film as its Oscars submission for Best International Feature and heaped Guldbagge awards atop its well-laureled head, the story has been anything but congratulatory in the film’s country of origin, Georgia. Far right, pro-Russian conservatives flooded November screenings in Tbilisi and Batumi to protest the film’s portrayal of the homosexual romance between its main characters, Merab (Levan Gelbakhiani) and Irakli (Bachi Valishvili). We spoke with Akin about the controversy surrounding the film and how his Georgian heritage motivated a tale of identity conflicting with tradition.

The following interview has been edited and condensed for clarity.

The Harvard Crimson: You’ve stated that the attacks at the 2013 Tbilisi pride parade inspired this story, and I understand you had a difficult time getting this film made due to its subject matter. Were you afraid at any point during the project?

Levan Akin: I wasn’t that afraid, actually. I was more angry. In Georgia, it’s legal to be gay. They’ve been protected under the law since the year 2000. On paper, it’s one of the most progressive countries in the region, but that's not implemented in real life. The far right people have so much space to exist. While we were filming, we were in contact with the municipality of Tbilisi asking, “We want to film in this location. Is that okay?” They would say "yes," and inevitably, they would find out what the film was about and with two days’ notice, sometimes one day's notice, say, “No, we’re suddenly renovating.” That really pissed me off because they were supposed to support us. I mean, we’re allowed to make a film about whatever we want.

THC: You’ve described the film as a coming of age story, not a coming out story. Can you speak more to that distinction?

LA: To me, the film is about self-realization. In the film, Merab never questions his sexuality or becomes angry about it or sad or afraid. He just embraces that he’s in love, which was very important to me. And through that love, he finds his place in this society that does not accept him, and he decides to break free from it.

THC: As a person of Georgian descent born in Sweden, did you draw on your own personal experience while writing the script?

LA: Yeah, I did. I grew up in Sweden, but the Georgian culture was always present. I wanted to make a celebration of Georgian tradition and culture. And the family dynamic is so important. That’s also because of the economic situation. People are really struggling. You have to have this sense of community to survive. And I wanted to show the viewer what Merab potentially could lose by following his heart. He wouldn’t only lose the love of his life, which is dance, but also his family. Change and movement is something that defines humanity, and that was something that I was thinking about a lot while making the film.

THC: The modernist take that the world is in flux was captured with the cinematography. It has a documentary feel, and there aren’t many wide shots. Can you explain the impetus behind that style of filming?

LA: That style of filming was also very much a practical matter. We had a lot of trouble shooting the film because of how flexible we had to be all the time. We had very little money. We had little time. And we would lose locations. So, it’s like art out of necessity in a way.

THC: Could you speak more to the challenges of making a film like this in Georgia?

LA: I had to be very flexible. I couldn’t really plan out the movie as I usually do, which was fun because it kept my curiosity alive all the time. But I would write the script while we were shooting sometimes because I had to change so many things and I worked a lot with amateurs — with people I met doing research. And a lot of the scenes were filmed in the moment, like the scene with the sex workers. They were working that night and we just came and filmed. It became this neorealist approach to filming. All the locations are real. We didn’t change things with production design. The actors are wearing their own clothes for most of the film. We had barely any makeup. It was very bare-bones. I think that’s why it feels so real, too.

THC: I was so moved by the connection between Merab and Mary, and then I learned that those actors have actually been friends since they were very young.

LA: I know, I know. And I mean Levan (Merab) wasn’t even an actor. He’s a dancer. I found him on Instagram. And Mary had acted and they had known each other since they were thirteen years old, which is so sweet. So I just built off what I found.

THC: Do you feel a great sense of community with your cast and crew, along with the people who love this film?

LA: I do, I do. I feel that a lot. But, on the other hand, sometimes I also feel a little isolated and a little outside everything because, you know, they are all in Georgia, all together. And I’m in Sweden or New York or wherever I am at the moment. I don’t know anymore. I’m traveling all the time. And sometimes I feel sort of like an outsider, but I guess that’s what also enabled me to make the film in the first place.

THC: I want to ask you more about this notion of feeling isolated. It seems like films with the most empathy for a character are really about looking at someone who is isolated and opening them up to the audience. Do you feel that’s what you did with your main character, Merab?

LA: I think all my movies, in some way, have been about outsiders and isolated people. And I think that comes with — you know, I was born and raised in Sweden, a country which I love. But I’ve been reminded my whole life, from time to time, that I’m not really Swedish, either. You know, there’s a lot of racism in Sweden at the moment. You just feel like you don’t really have a place that’s yours. And I think that’s definitely impacted the types of stories that I’ve chosen to tell. But I think because I’ve sort of been hiding in my previous works, with this film I sort of threw everything out the window and I did something that was just purely coming from a place of excitement and love and curiosity. I’m always going to work like that from now on. If I don’t find an entry point that really, really interests me, I won’t do it.

THC: So, what comes next for you?

LA: I’m actually going to Istanbul to research my next film. I don’t know if I will actually make a film in Istanbul, but I have some things, some stories that I’ve heard, that are set there. And I love the city, so I want to go there and see if I find something interesting, some interesting person, that could inspire a story that feels relevant.

—Staff writer Gabriella M. Lombardo can be reached at gabriella.lombardo@thecrimson.com.