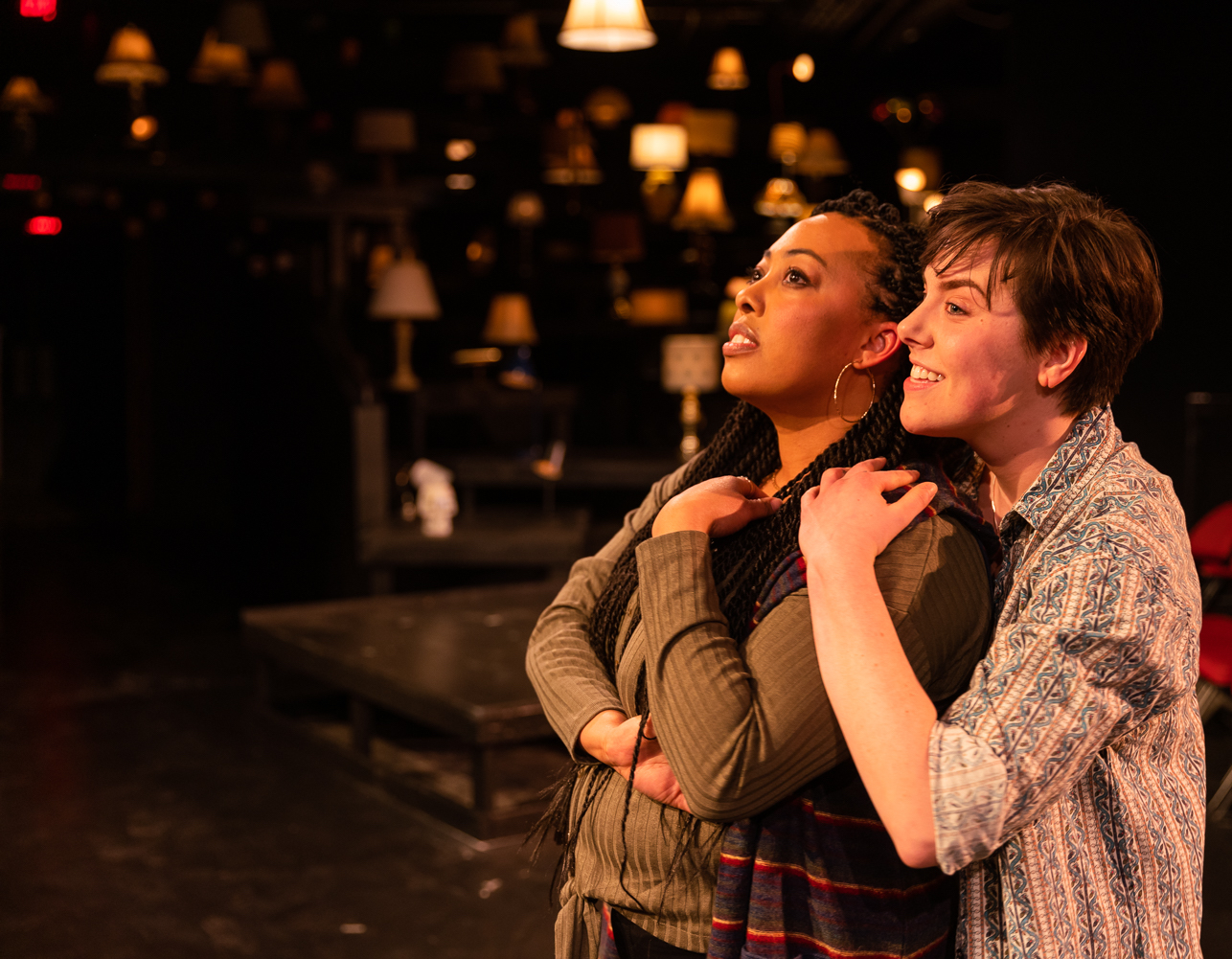 “Bright Half Life” is the latest work from Tanya Barfield, an accomplished playwright who boasts a dozen scripts among her accolades. The play — which first opened off-Broadway at the Women’s Project Theatre in 2015 — was brought to Boston by the Actors’ Shakespeare Project (ASP) and ended its run on Feb. 16. “Bright Half Life” catalogues the relationship between two women, Erica (Kelly Chick) and Vicky (Lyndsay Allyn Cox), over the span of their decades-long relationship, starting when they meet at their unspecified desk job and ending in divorce years later. Barfield, however, rejects this linear narrative: The show darts between every moment of their relationship in an associative, non-chronological pattern. Their divorce is not the end of the relationship, it seems, but one point among many, a point in a timeline that includes skydiving, raising twins, two messy proposals, and a third date on a Ferris wheel.

Often, divorce is narravitized as a failure, a project gone awry. “Bright Half Life” contests that depiction. A scene where Erica tells Vicky she wants a divorce repeats over and over again; Vicky shouts repeatedly that this has been half her life, half her life taken from her. But years later, as the pair stands in a hospital elevator, Erica asks her: “Would you do it again?” One unspoken answer is yes. Another is that it doesn’t matter. The relationship is repeated in a sequence of moments regardless. It is performed again and again, as in a series of memories. All the good moments exist next to the bad — a fight shifts into a proposal, a kiss shifts into a fight. The title offers a clearer answer to Erica’s question: Even if the relationship was half her life, the life has not been lost, but remains bright.

The show’s skillful depiction of a long-term, interracial lesbian relationship is worth noting. Barfield — an African-American gay woman herself — neither tokenizes the characters nor skips over their identities. Sexuality remains a question throughout, from Vicky’s strained relationship with her “not progressive” parents to a fight over Erica’s blazer, which Vicky describes as “soft butch, androgynous, something.” Issues of race are treated with equal thought. In one scene, Vicky grows frustrated with Erica’s inability to understand her experience as a black woman, explaining, “I just don’t want to have to educate you on your whiteness.” Erica contests that she’s oppressed too, by virtue of her sexuality. Vicky reminds her that it is not the same: “I am black first. I can’t not be black.” It is clear that the production does not use sexuality or race for show, but rather as an authentic, ingrained part of the character’s lives. Diversity isn’t just performed: A majority of the cast and crew consist of women and non-binary people, and a number of them identify their queerness in their program bios.

Cox and Chick excel at embodying intense emotion. Cox’s displays of anger and desperation are palpable and transform the stage, while Chick’s depictions of grief and uncertainty shine. At times, however, the chemistry between the two feels stilted. The show struggled to move between the time periods, sometimes resulting in awkward transitions. The nature of the production presents its own unique challenges. Even for skilled actors, it is challenging to carry a two-person performance. The lack of props also appeared difficult in certain scenes, making otherwise well-done scenes feel amateur.

The show’s lighting and sound design matched the mood well when used, though they were disappointingly sparse. Sound designer Elizabeth Cahill, who previously worked on ASP’s “Macbeth“ last year, proved as skillful with this contemporary script as she had with Shakespeare. The pre-show music, 4 Non-Blonde’s iconic “What’s Up?” followed by Tina Turner’s “Simply the Best,” was a highlight. The set is simple yet elegant: It’s mostly bare, with the exception of a series of over 30 lamps stacked floor to ceiling against one wall. The lamps pulse slowly throughout the show, luminosity flowing across the display. The play is set in the round, giving it an intimate feel.

Barfield’s prose is skillful. The third to last scene, which finds Erica attempting to articulate her love to Vicky in a grief-stricken first proposal, is a beautifully written passage and a stunning articulation of what it means to care for another person. Additionally, the pair’s interpersonal problems are unique and well-developed, requiring a thoughtfulness that is both rare and compelling. Nonetheless, the narrative movement felt shapeless at times. The fragmented style of the script doesn’t preclude the possibility of a clear narrative build, which only seemed to emerge in the play’s final few scenes.

While imperfect, “Bright Half Life” remains an impressive project, one whose caliber of prose and developed conceptual work set it apart.