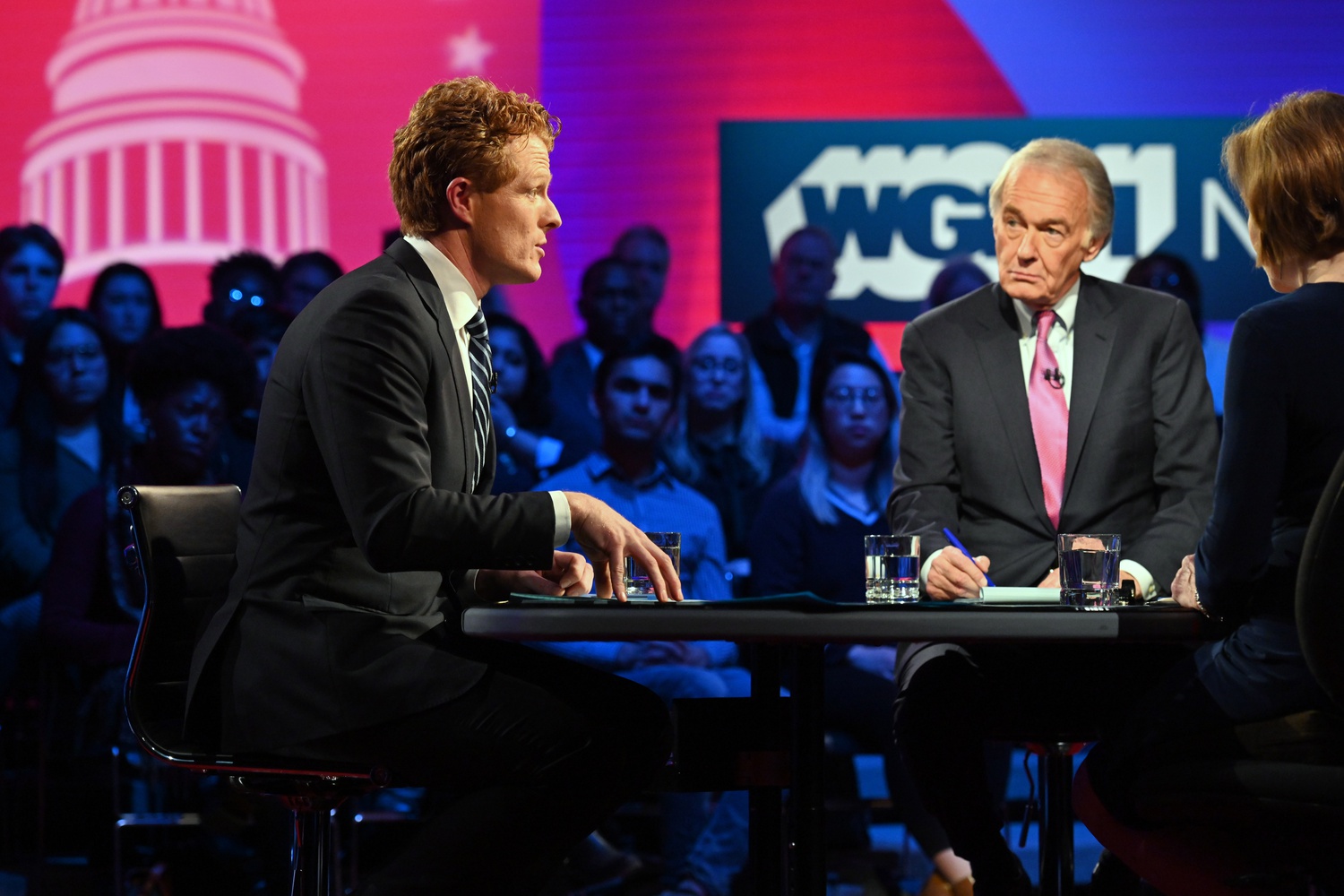 Kennedy criticized Markey for past foreign policy votes and over campaign finance issues, but he declined to attack the incumbent harshly, and instead called him a “good senator” who has “made an important contribution to our commonwealth and our country.”

In the debate, hosted by WGBH News, Markey stressed his experience and touted legislative accomplishments on policies involving gun control, climate change, and Alzheimer's disease research. He has served in the U.S. Senate since 2013.

“On the big issues of today — the challenges of today — I’ve not only been leading, but I’ve been delivering with legislation which passes, which protects the people of Massachusetts and the whole country,” Markey said.

“The Green New Deal, since we introduced it — Alexandria Ocasio-Cortez and I — just one year ago, it’s transformed the debate on this issue,” Markey said.

The two candidates sparred over campaign finance during the hour-long debate. Kennedy, a 2009 graduate of Harvard Law School, threw barbs at Markey for declining to comply with the People’s Pledge, which aims to limit outside money in politics, in this election. Markey signed onto the pledge back in 2013.

Markey argued that candidates “should not silence” progressive groups. He has released an alternative to the People’s Pledge that barrs negative advertising funded by outside organizations but still allows for third-party spending.

“How are you ever going to pass a Green New Deal if you allow the fossil fuel industry to open up the spigot and flood the airwaves with scare tactics?” Kennedy retorted.

Kennedy also drew a distinction between himself and Markey on foreign policy issues. He criticized Markey for his 2002 vote in favor of the Iraq War and his 2013 “present” vote on a resolution to authorize military force in Syria.

Markey said that the administration of former President George W. Bush “lied” about the presence of nuclear weapons in Iraq.

“It was a false pretense to start a war,” Markey said. “I’m still angry about the lie to the American people. I regret that vote. It was a mistake.”

Markey said that he voted “present” in committee on the 2013 Syria authorization due to a “rush to judgement” and a lack of information.

To defend his foreign policy record, Markey touted endorsements from several peace groups, including Peace Action and the Council for a Livable World.

The two candidates articulated similar views on many of the debate topics. They both posited their support for similar immigration reforms and Medicare-for-all. Both also chastised President Donald J. Trump for decisions he has made in office and called for Attorney General William P. Barr to be impeached.

Barr has come under fire in recent weeks after he intervened to lessen the Department of Justice’s sentencing recommendation for Trump associate Roger J. Stone Jr.

“This president violates his oath of office to protect every single citizen literally on a daily basis,” Kennedy said.

Erin O’Brien, a political science professor at the University of Massachusetts Boston, said Kennedy “punted” on multiple opportunities to differentiate himself from Markey.

“My main takeaway from the night is that Kennedy got two opportunities to say why he was better and different than Ed Markey — both in the opening question and in the closing — and both times he punted,” O’Brien said. “I think that was purposeful because people like both Ed Markey and Joe Kennedy, so Joe Kennedy doesn’t want to activate anger.”

“But ultimately, at least on the policy side, this is a race of what differentiates the two, and I don’t think Kennedy did that tonight,” she added.

O’Brien said she thought the debate was a “draw,” but noted that Markey had a strong start to the evening when the discussion was focused on climate change.

“He was able to dominate the first 15 minutes of discussion on an issue that he is recognized to be a real leader on,” she said.

Speaking to reporters after the debate, Kennedy said he hopes to “leverage” the power of a Senate seat in a blue state better than Markey has over his time in office.

“Senators from this state have traditionally been able to leverage that position to and the platform and the platform that comes with it,” he said. “I think we can get more out of this seat.”