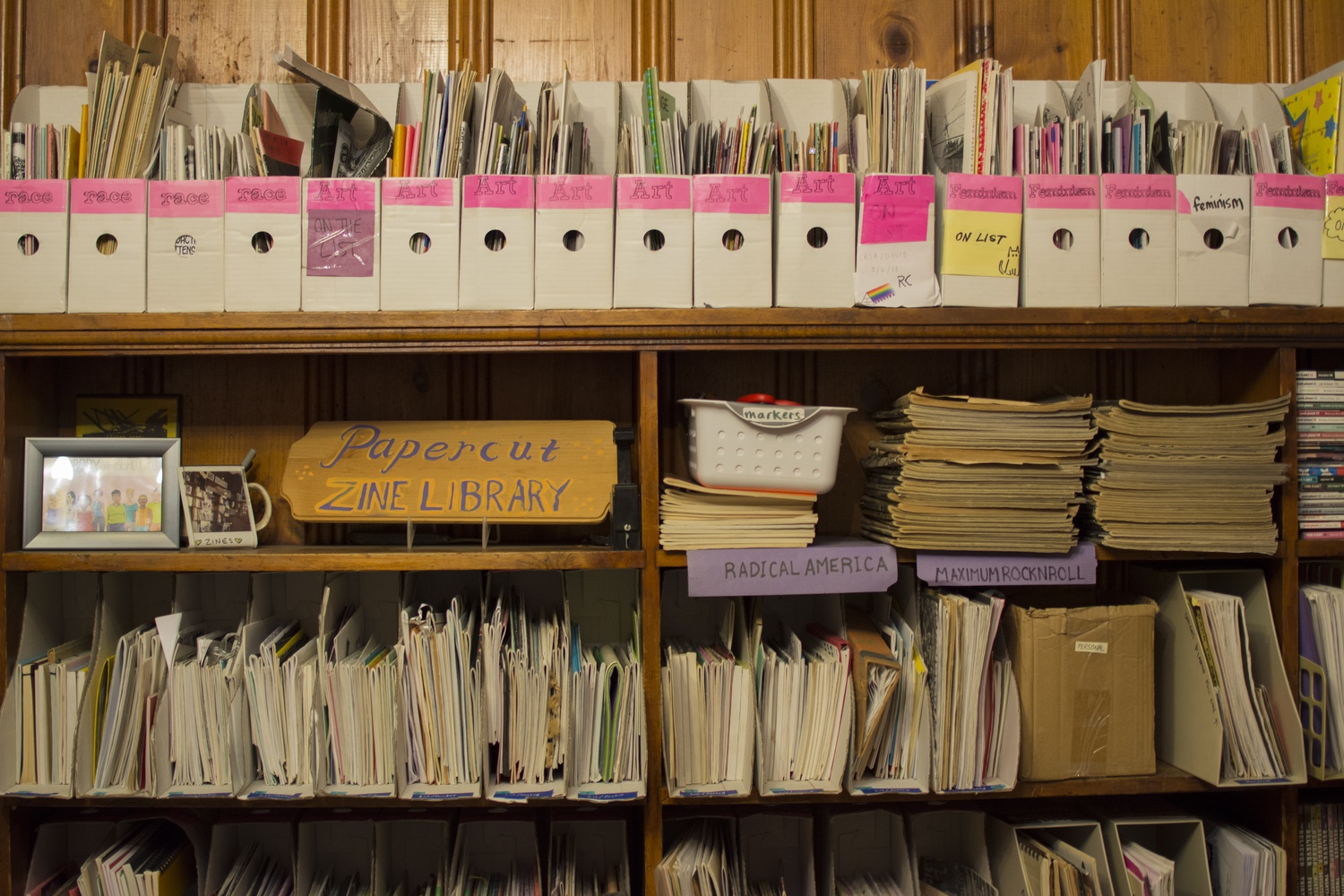 The Papercut Zine Library, started over ten years ago as a personal collection, now displays more than 16,000 magazines. By Thomas Maisonneuve
Advertisement
Advertisement

From Indie to Institution

At Schlesinger, you study zines; at Papercut, you read them. Sitting in Schlesinger’s sterile, white-walled reading room, there’s a dissonance between the environment and the zines’ anti-establishment nature.
By Elyse D. Pham

The words, typewritten and lowercase, stare up from a wrinkled page. They seem purposefully crooked, and the whole collection of misaligned paragraphs is bordered by lines of blurry sheet music, followed by a tilted “table of contents.” It’s as if each component were cut out, arranged, and glued together, a personal scrapbook of drawings and prose — certainly not the conventional image of an acclaimed publication with thousands of printed copies and international reach.

But for the small booklet, both descriptions hold true. Cindy Crabb’s “Doris” series — an autobiographical feminist zine of the 1990s — was famous enough to be anthologized in paperback. Now, it’s also the pride and joy of the Harvard Schlesinger Library on the History of Women in America, a part of its 29-box zine collection.

Zines — short for “magazine” — are a type of publication often defined by being small-circulation, self-published, and inexpensive. They can center on cooking, bikes, menstruation, and anything in between. Many zines, including the ones in Schlesinger, are primarily by, about, and for women — possibly because the zine format typically lends itself to the kinds of self-expression unfit for mainstream publications.

That unique quality is what drew the Schlesinger Library to zines in the first place. A 2007 talk by graphic novel scholar Hillary Chute “convinced us that we should be collecting these more seriously,” says Marylene P. Altieri, a Curator of Books and Printed Materials at Schlesinger. “They were a really important avenue for women’s and girls’ voices to be heard in a completely unfiltered way, not going through any kind of editorial or censoring process.”

The Schlesinger collection’s ultimate goal is “to preserve these voices,” Altieri adds. “These people are not in your main books and periodicals...So if researchers of the future want to find out anything about them, they need collections like this.”

Such a focus on preservation is immediately apparent upon visiting Schlesinger. Per library rules, the zines must be brought out of off-site storage and can only be viewed in the library’s reading room, one box at a time. Manila folders separate each zine, many of which are sealed off in plastic bags.

A ten minute walk away from the Schlesinger, at the Democracy Center on Mt. Auburn St., lies yet another zine collection. Here the public can browse at will, unsupervised, taking zines out of the cardboard holders that line its shelves and retiring to a worn couch to read. It occupies only one room; the wood-panelled walls and organized clutter create a distinct impression of coziness.

“It’s kind of funny, because we’re sort of punky and radical in a way, but we’re also just like the most wholesome thing ever,” says Gabrielle Lapoli, co-librarian of the Papercut Zine Library. “It’s [run by] people who want to take their free time to enter data into a database, to make sure that people can find the things that they want.” 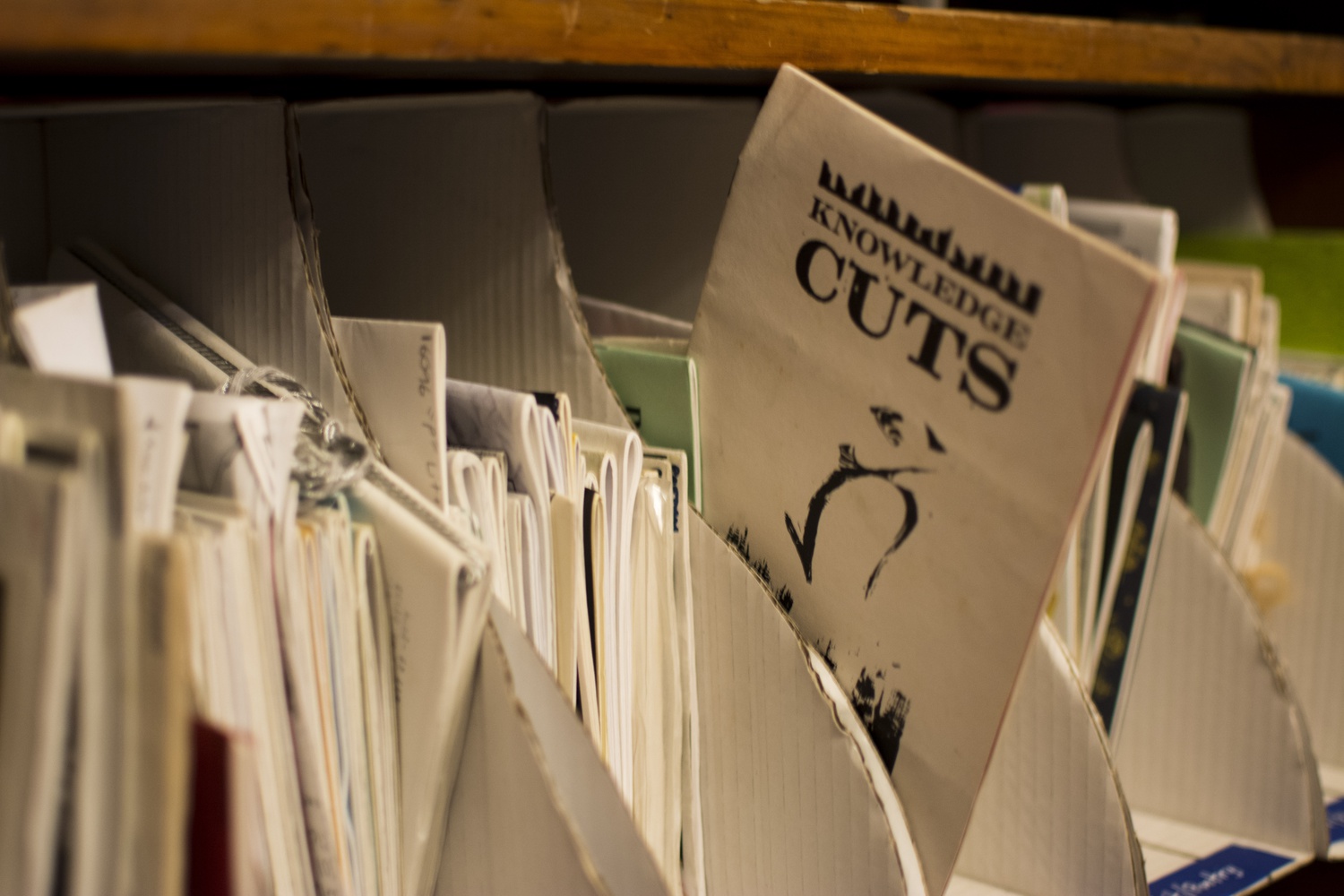 The zines cover a wide variety of topics, from politics to cooking and bikes. They are grouped in binders for easier consultation. By Thomas Maisonneuve
Advertisement

Papercut Zine Library began just over ten years ago as a personal collection and gradually evolved into its present display of over 16,000 zines. The library is entirely volunteer-run. Its current focus is cataloging, with the hope that it can return to its previous function as a lending library.

As the only zine library in Boston, Papercut attracts an array of visitors and zine donors: Much of its collection comes from people who send in zines from across the country and globe. In fact, when Schlesinger decided that they wanted to begin collecting zines, Altieri and other curators paid a visit to Papercut. “We went over there, just to look at: What is a zine? How many different kinds are there? How should we go about doing this?” Altieri says.

Years later, shared themes unite the two zine collections. Papercut’s selection is more expansive, but the bulk of its zines are in its “Feminism” and “Health and Sex” sections — much like Schlesinger.

Still, Papercut remains markedly less formal. At Schlesinger, you study zines; at Papercut, you read them. Sitting in Schlesinger’s sterile, white-walled reading room, there’s a dissonance between the environment and the zines’ anti-establishment nature.

In a zine called “Adventures in Menstruating,” the introduction reads, “One day, maybe this zine will be found next to (instead of) “Cosmo” on the newsstands, but for now it’s not exactly mainstream.” Another laments the punk scene’s hesitancy to discuss race and racism in its discourse and asks, “What are we left with?” — to which the zine offers itself as the only solution. Both are disillusioned by dominant media, but simultaneously desire to “one day” be a part of it, to force it to recognize them.

Maybe zines, then, are not simply representative of counterculture for counterculture’s sake. Rather, when the perspectives within them are dismissed by “culture,” the zine format presents a means to protest that erasure. Their presence in the Schlesinger and Papercut libraries alike serves as a testament to the success of such an endeavor — giving zines the privilege of place within public spheres and institutional memory.