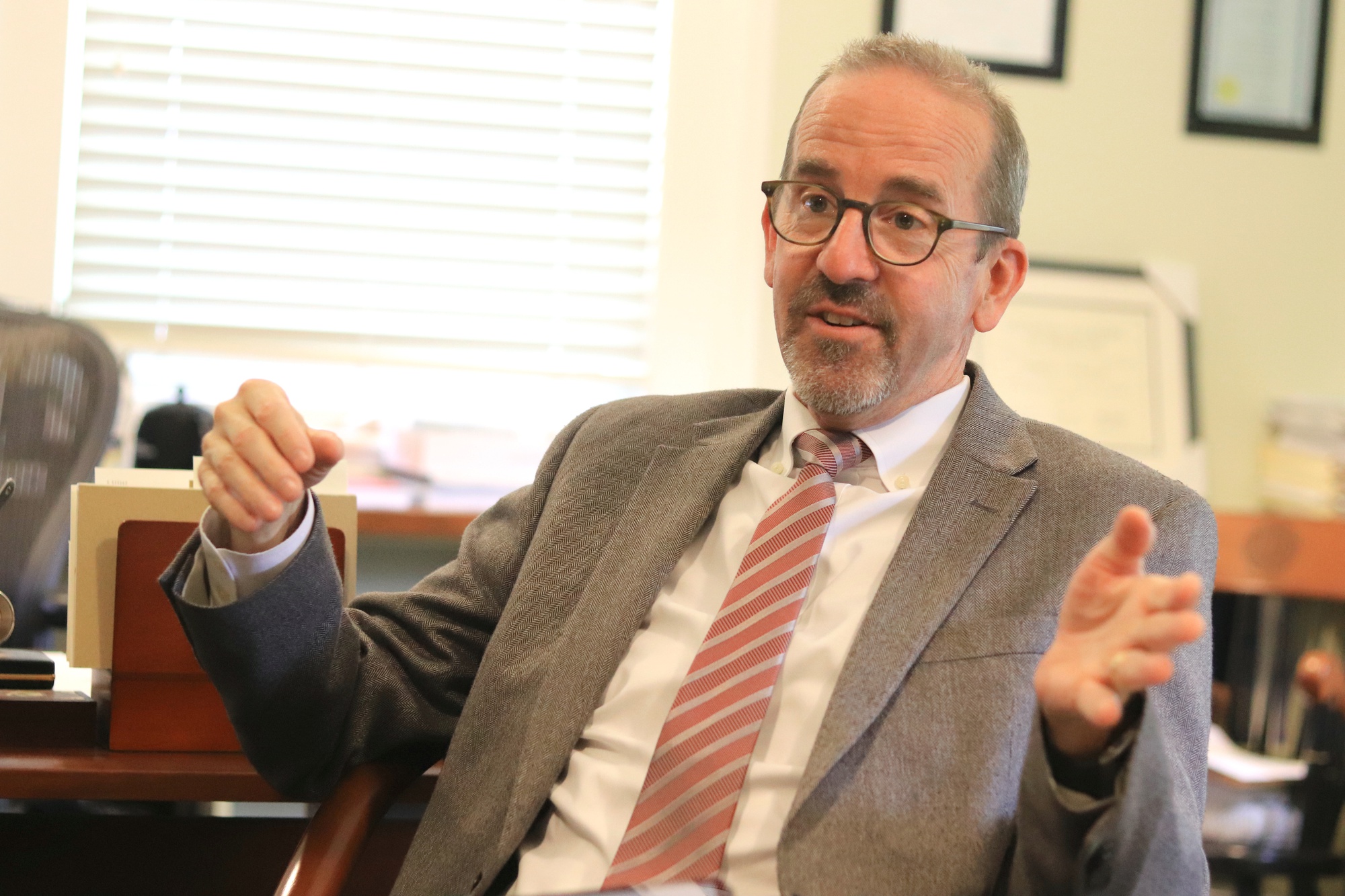 Dean of the School of Engineering and Applied Sciences Francis J. Doyle III speaks about the upcoming move to Allston in his office during an interview on Monday.
By Brie K. Buchanan and Elizabeth X. Guo, Crimson Staff Writers

As the debut of the new Science and Engineering Complex in Allston fast approaches, Dean of the School of Engineering and Applied Sciences Francis J. Doyle III discussed new resources for students and faculty at the campus in an interview Sunday.

The new Science and Engineering complex is expecting to receive its certificate of occupancy in May and then the initial transition of office spaces will begin in the first week of June, according to Doyle. He added that not all faculty will move to the campus at the same time, and that another “wave” of faculty will remain in Cambridge initially and transition to the new complex in January 2021.

“Some of the faculty will move in a second wave that will happen in January. And that was mainly because they've joined us recently, we didn't have their labs optimized, or designed, or finished,” Doyle said.

Doyle said he and other administrators hope to make the Science and Engineering Complex a facility for all Harvard affiliates, adding it will host not only SEAS classes but also courses in other parts of the Faculty of Arts and Sciences.

“This is a Harvard building. This is not just an engineering facility or resource. So we're trying to make it as attractive as possible to pull the community in and have events there, to have teaching there, to have collaborations there,” Doyle said. “It really is a key part of what we want to achieve and what Harvard wants to achieve with this resource.”

Doyle also said he anticipates that the new complex will collaborate extensively with surrounding facilities, including the ArtLab, iLab, and Life Lab.

The American Repertory Theater — currently located in the Loeb Drama Center on Brattle Street — has already begun planning collaborations with the SEC in anticipation of its move to Allston in the near future, Doyle said.

“We're brainstorming with [Artistic Director] Diane Paulus,” he said. “They’re going to have some amazing facilities and fabrication equipment in their complex or their performances we might collaborate on that either have a scientific theme or a societal theme that we want to be involved with.”

Doyle said that the new complex gave faculty the opportunity to redesign classrooms that allow them to innovate new styles of teaching, comparing the developments to Harvard Physics professor Eric Mazur’s invention of the flipped classroom in the 1990s. He said the complex will include unique features not found at other universities, citing the “plaza clubhouse” — a classroom with a large central room attached to several smaller “breakout” rooms — as an example.

“The teams can split out, go into these side rooms, and then rejoin and come back into the main room and be part of like a full lecture kind of experience,” Doyle said. “I'm not aware of facilities like that anywhere. A bunch of our faculty brainstormed, and they came up with this idea to do something pedagogically different since we had a real clean slate and we were designing the teaching space from scratch.”

Stefan Behnisch, the German architect at the helm of the project, has been collaborating with SEAS to prioritize innovative and sustainable design, according to Doyle. Some design features include a groundwater-catching cistern in the basement, green space behind the building, and angled window shades that adjust seasonally while letting in sunlight.

“The campus pressure has been that we want a sustainable building,” Doyle said. “In many cases, you might get a tug of war there. In this case, it hasn't been, because what the campus wants is what the architect has a vision for and excels in themselves.”