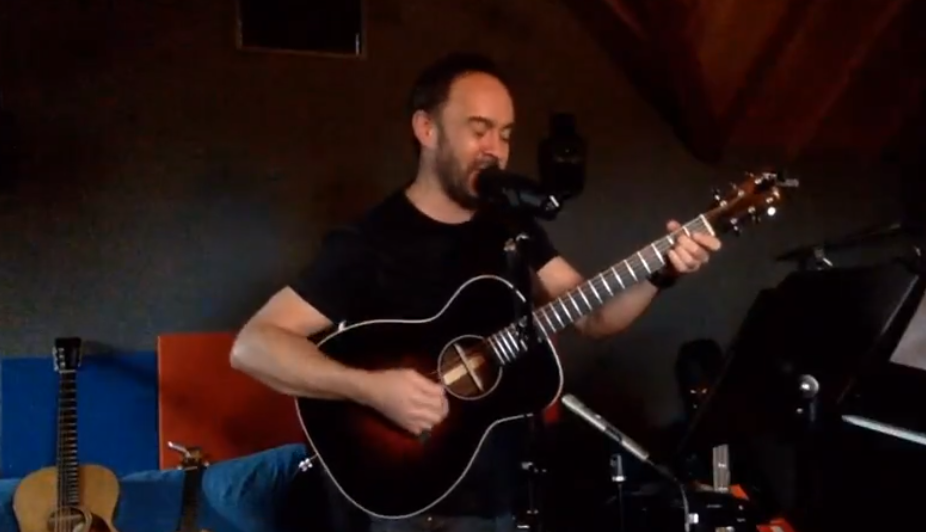 “It’s quite strange to be playing to an empty room, but I’m hoping it’s going okay, that you’re here and I’m here,” Dave Matthews said during his live-streamed performance as a part of Verizon’s #PayItForwardLIVE — a series of online concerts in support of small businesses featuring everyone from Marshmello to One Republic — on Mar. 26.

Streaming from an empty room, Matthews started his hour-long set with “So Damn Lucky” from his solo album, “Some Devil.” As he played the song’s finger-picked melody, softly singing about “what will soon become of [him],” two acoustic guitars and a lone ukulele stood in as his audience. A music stand with the lyrics to his songs accompanied him too as Matthews divulged that he had trouble remembering them without the energy of a crowd. “This is strange, you know, I'm talking to a computer,” he said at one point.

In between songs, Matthews cracked jokes to the camera and, in line with the night’s mission of supporting small businesses, gave his own tips for helping out during social distancing and isolation. “I just think we should think about all those places that are one to us and are closed for now in this dangerous time,” he said. “So, maybe, we can invest a little bit in the possibility that they may come back.” Matthews spoke openly about the coffee shops and bars he would frequently haunt, citing the large role they have played in his life and acknowledging their absence.

His next song, “Mercy,” cut especially deep given the present circumstance. “I know you can see / All the world and the mess that we're making,” he sang, and the lyrics took on new meaning when propped up against the background of the need to live-stream performances in the first place. “Mercy, will we overcome this?” he sang at each chorus, letting his voice rise powerfully over his guitar playing as though he were earnestly begging for an answer, but Matthews seemed to know that all he could do was “maybe carry on just a little bit longer,” both for the loved ones featured in the song and for those from whom he is now isolated from. After the song, Matthews gave the best advice of the night: “Stay home. Stay away from me. Have a good time online and whatnot.”

He introduced his next song as one “about some dear friends” before starting the intro to “Virginia in the Rain,” one of the standout tracks on Dave Matthews Band’s latest album, 2018’s “Come Tomorrow.” While the studio version is heartfelt and yearning, his performance on Verzon’s livestream was more stripped down, somehow even more comforting than the nostalgia-inducing original recording. The normally slower song became upbeat and summery, almost as if the melody itself was anxious to go run outside amongst the wildflowers. Or at least, that was the image created by Matthews and his guitar from within the confines of the white-walled room. Eventually, the song’s summer feeling caught up to Matthews, who completely gave into the desire to sing every voice part of the song as his guitar weaved through rhythm, lead, and bassline, making the performance especially fun and engaging for those watching from home.

“I don’t know if I played this already. Maybe I didn’t? But I think I’m gonna shut up and play some more music,” he said with the same candor that characterized the livestream from start to finish. “If you have something to do, you should feel free to go do it,” he added, reminding his viewers once more of the strangeness that is watching an artist perform to an imagined audience.

“I haven’t played this song before, only for my family… but it’s quite sweet, I think,” he said, aptly introducing an unreleased song inspired by the Covid-19 pandemic titled “Windows.” With his voice singing lightly over the fingerstyle melody, Matthews carved a vivid image of a home and a community on lockdown, of being stuck inside but also of neighbors singing to each other from their windows. “None of us know what’s to come tomorrow, but I’m not going out today, so dance with me like the time we got is borrowed,” he sang, urging the livestream’s viewers to do the same. With “Windows,” Matthews focuses on the little things that keep him going during the crisis — of hallways and children playing and yearning for the day when the world will no longer have to live through windows — while parsing out the beauty in each of them.

Matthews ended his eight-song set with a haunting rendition of the Dave Matthews Band classic “Don’t Drink the Water,” his voice soaring effortlessly to a high falsetto while his guitar blazed under it.

“Thank you so much for tuning in. I hope that I’ve got it all right for you and everything,” he said just before turning off the camera. “Remember to look out for each other! That’s the number one thing in getting through things like this: Just be kind!” And with that, he put away his guitar, and the screen fell to black, his image replaced with Verizon’s glowing logo and the words “#PayItForwardLIVE.”

— Staff writer Sofia Andrade can be reached at sofia.andrade@thecrimson.com