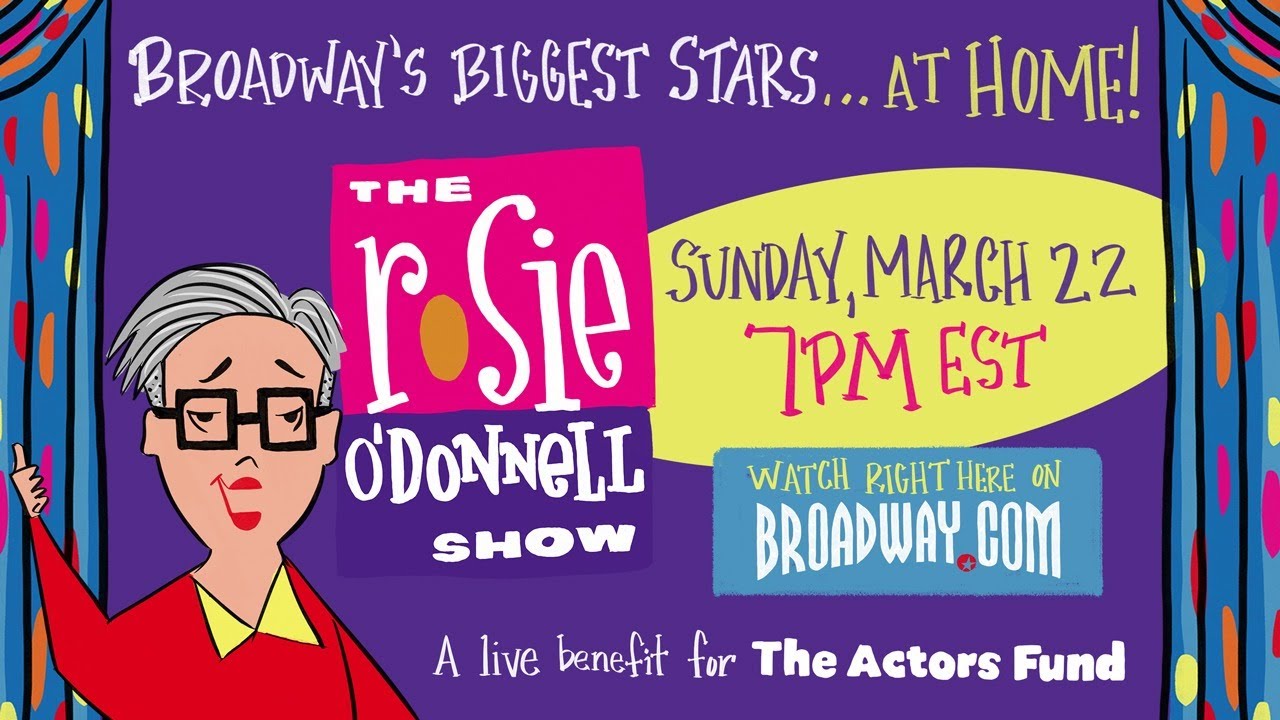 "The Rosie O'Donnell Show" Benefit for the Actors Fund, graphic by Ryan Casey. By Courtesy of Broadway.com
By Nina M. Foster, Contributing Writer

It was a sad day when Broadway shut down on Mar. 12 due to the COVID-19 pandemic. Theater lovers were devastated — but more importantly, the cancellation of performances left casts, crews, and production teams without jobs. To provide aid during such a difficult time, Rosie O’Donnell, a comedian, actress, and author, brought back her 25-time Emmy Award-winning “The Rosie O’Donnell Show” for one night only. Streamed live on YouTube, O’Donnell’s show brought together Broadway stars from past and present to raise money for the Actors Fund, an organization that supports those in the entertainment industry. In addition to fundraising for a rewarding cause, the benefit showcased incredible performers and humanized stars throughout the industry. Poor wifi connections, struggles with audio, and views into celebrity homes felt more comforting than unprofessional, reminding viewers that the distance between seats and stage, audience member and performer, is not as insurmountable as it seems.

John McDaniel, the lead composer and producer of “The Rosie O’Donnell Show,” was the first guest of the night. McDaniel set the show off on a cheerful note with a rendition of “We Need a Little Christmas,” cleverly switching the line to “we need a little Rosie.” Most of the guests that followed kept the tone of the show just as upbeat, focusing less on the negative impacts of the virus and more on the bright future for Broadway after reopening. Even those who had spent months preparing for premieres only to have them cancelled days before remained optimistic. Matthew Broderick and Sarah Jessica Parker, whose show “Plaza Suite” was set to begin on Mar. 13, only had good things to say about their healthy family and their gratitude for O’Donnell’s benefit. Words of encouragement and uplifting songs persisted throughout the three-and-a-half-hour show, lightening up unfortunate circumstances.

While all of the evening’s performances were meaningful and showcased impressive vocals, a few stood out as particularly mind blowing. Ben Platt serenaded viewers with a performance of “Make You Feel My Love,” effortlessly navigating the wide range and belting out higher notes with his trademark vibrato. Later, one of Platt’s “Dear Evan Hansen” successors, Jordan Fisher, performed “For Forever” from the musical. Fisher’s talent radiated as he sang the entire song with a smile on his face. Even the occasional glitch from a poor wifi connection could not detract from the pitch-perfect rendition. “Smile” was another popular choice, sung beautifully by both the legendary Patti LuPone and Audra McDonald with Will Swenson. This mission — to make viewers smile — continued with nostalgic Disney tunes as Andrew Lloyd Webber played a clever medley and Lea Salonga sang “Reflection” from “Mulan” just as exquisitely as she did in the 1998 film.

In addition to the performances, interviews, and short pre-recorded video messages, technical difficulties were a constant source of entertainment throughout the live stream. The show’s producer, Erich Bergen, became known as “Rosie Tech Support” after three guests in a row lacked audio and O’Donnell herself had trouble with her microphone. Many of the stars’ audio or video would skip, revealing that even celebrities struggle with acquiring flawless wifi. None of these issues made the experience less enjoyable; instead, the shared struggles brought viewers and performers closer together. Idina Menzel, whose talent has been displayed in theater, television, and film, tuned in from her kitchen with shaky camera angles and overall technological confusion, reinforcing the casual ease of the show. Her interview recalled conversations that many parents are having right now, with topics including the adventure of homeschooling and entertaining Menzel’s children. The informality of the live stream created an intimacy that does not exist during Broadway performances and interviews set in a studio, allowing viewers to bond with the stars along with O’Donnell.

O’Donnell’s one night only return was exactly what theater lovers and members of the Broadway community needed during this uncertain time. The show has since been posted on YouTube and the fundraiser, which has already raised almost $100,000, is still running. By bringing Broadway from the homes of the stars to the homes of the audience, O’Donnell successfully created a necessary feeling of unity and strength.