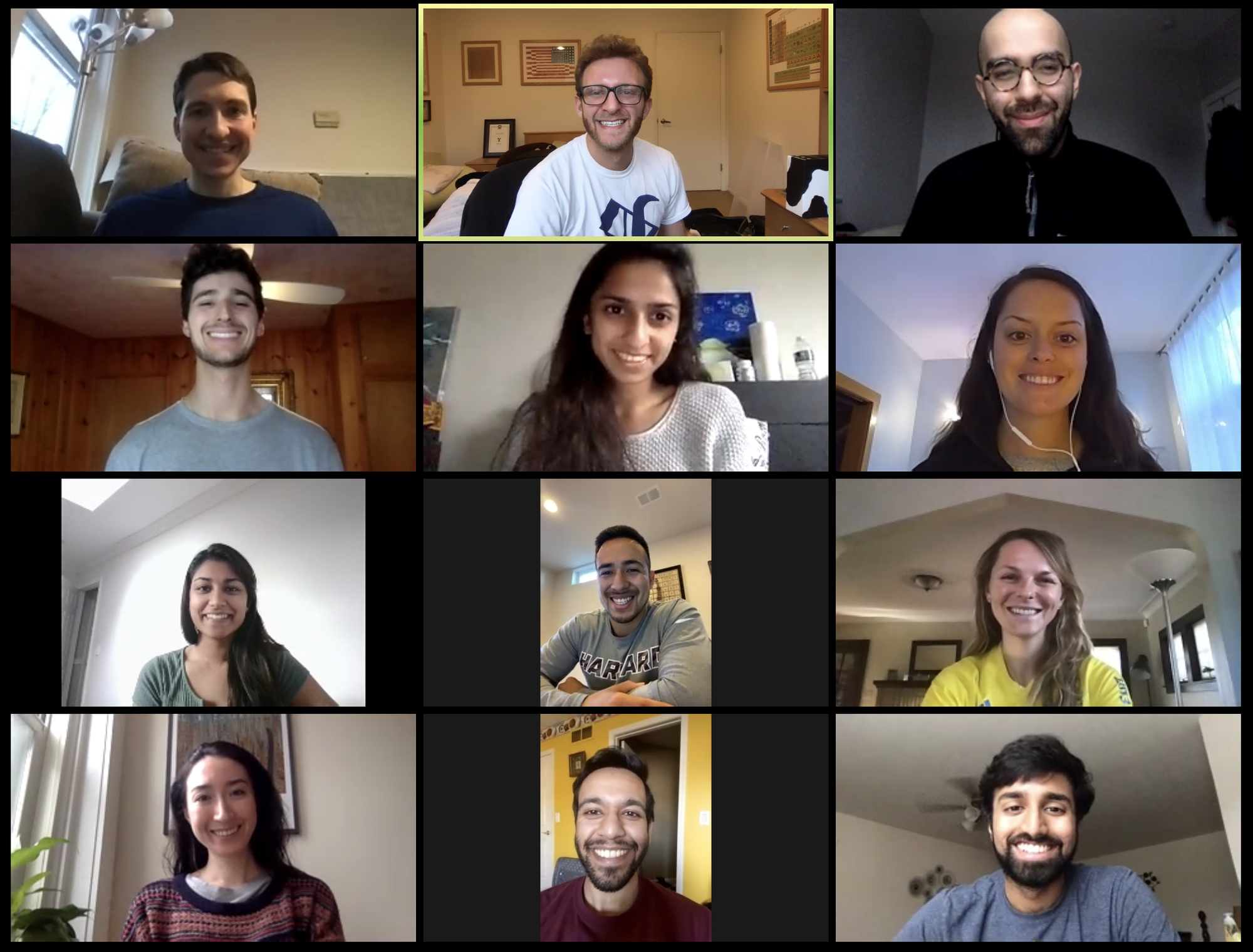 Waiting To Be Called Upon

As COVID-19 has spread across the country, many hospitals have struggled to keep up with an influx of new patients. In hopes of alleviating the pressure on the medical system, many state governors have called on medical school deans to allow their fourth-year students to graduate early so that they can begin their residencies immediately. Though Harvard Medical School now offers this option, bureaucratic barriers have prevented many eligible students from answering the call. As a result, Torres isn’t the only student to feel as if they have been left in limbo, neither able to continue their medical education online nor start their residency programs until the summer.
By Harrison R. T. Ward

These days, Carlos A. Torres, a fourth-year at Harvard Medical School, feels like a “sitting duck.”

“We’re not doing much work, but if given the opportunity, we could help out,” he says, exasperated.

Last week, Torres finished the final lecture component of his medical school education from his home. He stands on the cusp of graduating from medical school and beginning his residency. But after the HMS administration announced that all clinical rotations were to be put on pause on March 14, it appeared as if he would never have the opportunity to complete the clinical component of his Capstone Rotation, described by the Medical School’s course catalog as “a culminating clinical experience for all fourth-year medical students.”

He fills his newfound freetime at home with Netflix and recently baked banana bread. It had been on his to-do list for a while.

As COVID-19 has spread across the country, many hospitals have struggled to keep up with an influx of new patients. In hopes of alleviating the pressure on the medical system, many state governors have called on medical school deans to allow their fourth-year students to graduate early so that they can begin their residencies immediately.

Though Harvard Medical School now offers this option, bureaucratic barriers have prevented many eligible students from answering the call. As a result, Torres isn’t the only student to feel as if they have been left in limbo, neither able to continue their medical education online nor start their residency programs until the summer.

As of now, his residency in general medicine at a hospital in Portland, Ore. has yet to call him to start early. His scheduled start date is June 15.

Kirstin W. Scott, another fourth-year student, was heading into a rotation in the Boston Children Hospital’s Emergency Department when she learned that all clinical rotations had been suspended.

Following the announcement, Scott and two other HMS students, Derek R. Soled and Shivangi Goel, decided to take matters into their own hands. By 10 a.m. the next morning, they had formed the HMS COVID-19 Student Response Team.

“I think this frustration, more than frustration, the sadness that many students are currently facing is because they just want to help in whatever capacity they can,” Goel says. “It feels like [we are] in this really dire time when people are really sick and our health system is so overburdened, but individuals who have the capability to help aren’t able to be deployed yet.”

The HMS COVID-19 Student Response Team offers a way for students to collaborate with the HMS administration and find more avenues to get involved. Scott says the team polled their classmates to understand the extent to which “they’re feeling moved to respond.” After speaking with their fellow HMS students “the team identified four areas of need in which medical students could take an active role,” Soled says.

Those four areas became the broad structure for the team’s four core board committees. One would focus on disseminating information to medical professionals. Another would prepare information for the community. The final two boards would focus on community activism: one by providing “non-clinical” support to healthcare providers, and the other by helping match medical students with opportunities to assist in caring for patients.

The team sent out a survey to HMS students asking who would be willing to volunteer in a clinical setting, with, Goel says, the goal of “relieving the burden on the healthcare workforce at this time.” As of today, more than 420 HMS students have responded.

“It just goes to show that even when it's a completely voluntary effort, when it’s a very dangerous situation out there, there’s not always PPE [personal protective equipment], that our students are really committed to helping in whatever way they can,” Goel says.

Though many HMS students are unable to graduate early and begin their residencies, the HMS COVID-19 Student Response Team has been coordinating with academic hospitals to find opportunities for medical school students to put their medical expertise to use in a hands-on way.

But despite this enthusiasm, as of last week, only about 80 HMS students were volunteering in a clinical setting through the Response Team, Goel says. Credentialing and licensing requirements mean that medical school students can only volunteer to practice medicine in hospitals where they are provisionally licensed as medical school students. She expects the number of volunteers will be closer to 150 or 200 students by the end of this week.

Although many students are eager to start, it is ultimately up to each hospital and residency program if they will ask their incoming residents to graduate early and begin working. Josie T. C. Fisher, a fourth-year HMS student, says she would start her residency program in Internal Medicine and Primary Care at Massachusetts General Hospital early “in a heartbeat” if she were asked; as of now, she has not. “Those are our future colleagues,” she says, working hard and in “risky situations.”

Fisher does add that if her program does not truly need her, she does not want to start early and add to the hospital administration’s workload, because the “burden of getting us credentialed is really high.”

As he was finishing his final days of medical school via Zoom, Torres volunteered to help educate the general public last week through HMS COVID-19 Student Response Team’s Instagram: @futuremdvscovid. He, along with others, created infographics to answer the public’s questions and found memes that were “funny, but also, kind of serious and grab[bed] people's attention,” he says.

“Everyone is a COVID patient,” Scott says. She explains that patients with health issues who have not been able to go to the hospital because of quarantine now face an increased risk. The HMS COVID-19 Student Response Team has been coordinating telemedicine opportunities to help treat standard clinic patients or primary care. “That is part of the COVID response, if you will — you don’t have to be interacting in an ICU,” Scott continues. “We all as a society are part of this response right now.”

Even as hundreds of students are eager to help on the front lines in the fight against COVID-19, the HMS COVID-19 Student Response Team has been attempting to remain mindful of issues and communities that “could potentially be neglected,” as the nation hones in on the immediate impact of the virus. They’ve focused their attention on Indigenous communities, the imprisoned population, and the homeless.

“We may not be using all of our medical knowledge and all of our medical training in any individual task, but at the end of the day, no task is too small,” Goel says. Medical students could be delivering groceries to the elderly or in the ICU. “We’re still helping an individual in the community who is affected by COVID,” Goel adds.

Despite his desire to volunteer in a hospital, Torres acknowledges that it could be dangerous. “We’ve heard horror stories of physicians who are not getting adequate protective equipment, so they’re not practicing in safe environments,” he says.

Fisher voiced similar concerns. She notes that whether or not she is seeing COVID-19 patients, the virus can linger on surfaces, so she worries about “bringing it home and exposing my husband.” She also notes that her parents, who live nearby, are in an age demographic that puts them at risk of “worse outcomes” should they contract the virus. Thus, she anticipates that she will have to avoid seeing them for an extended period of time after her residency program begins. “I recognize I won’t get to see [my parents] once I start,” she says. “It could be for quite some time that I don’t get to see them.”

Beyond the immediate risk of infection, Torres also worries about burnout. “The four to five weeks of vacation that you have in between the end of medical school and the start of internship, people like trying to live it to the fullest,” he says. Graduates often plan trips, parties, or weddings in that time between graduation and the beginning of their internship or residency program –– which often requires up to 80 hours of work per week.

Torres says he was invited to three of his classmates’ weddings that were supposed to take place during this time –– all three have been canceled.

One of the final lectures of his medical school education focused on the ethics of work-life-balance. “Where do you draw the line to take care of yourself and take care of other people?” Torres says, recalling its content. He mentions that a number of his classmates have been thinking “out loud” about that issue lately.

As fourth-year HMS students try to come to terms with their role in this pandemic, almost but not quite able to become first-responders, the uncertainty has provided time for reflection. The moment “requires humility,” Scott says. “We need to be patient and to try and set ourselves up to be ready when we are called upon.”

— Staff writer Harrison R. T. Ward can be reached at harrison.ward@thecrimson.com. Follow him on Twitter at @Harri_son_Ward.