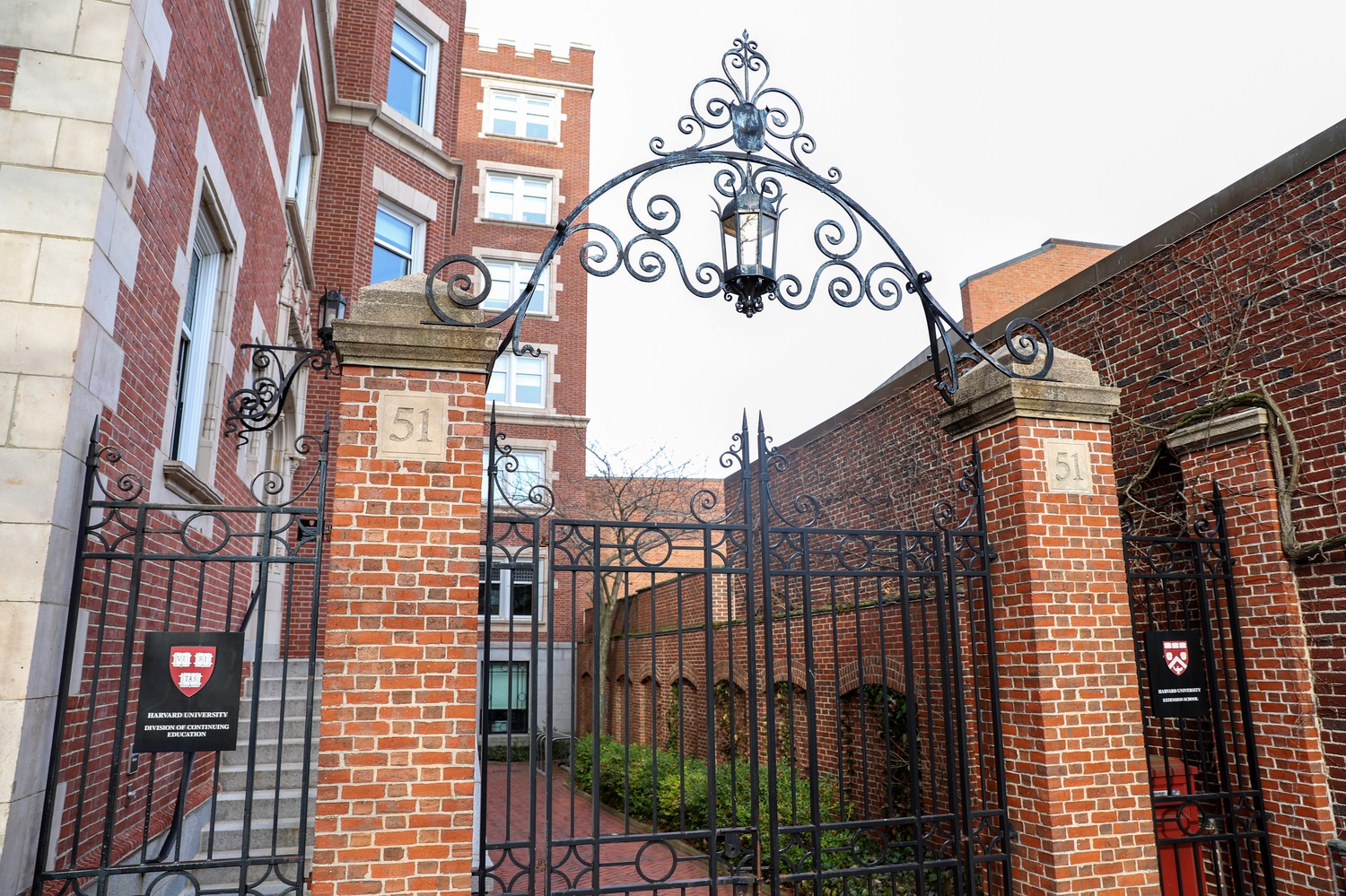 The Harvard Extension Students Association shared Monday that Jacob Khan would serve as the next President of its executive board, after defeating his opponent Dale A. Manzo in a runoff election characterized by controversy. By Ryan N. Gajarawala
By Amanda Y. Su and Andy Z. Wang, Crimson Staff Writers

The Harvard Extension Students Association — the official student government of the Extension School — shared Monday that Jacob Khan would serve as the next President of its executive board, after defeating his opponent Dale A. Manzo in a runoff election characterized by controversy.

Rizek said Khan had invited her to The Sinclair, a Cambridge music venue, in November. Shortly after she arrived, Rizek alleged Khan began “forcefully” grabbing her arm, physically forcing her to leave the premises.

Rizek said she repeatedly told Khan to stop touching her and leave her alone. She said she eventually broke away, at which point another student at the venue grabbed Rizek, leaving bruises, blood, and scratches on her body. Khan then pulled that student away.

CPD spokesperson Jeremy Warnick confirmed in an email last week that Rizek filed a report on January 17 regarding an assault and battery incident that reportedly occurred on November 3.

Khan wrote that after Rizek asked him for his location via text message the evening of November 3, he responded stating that he was at The Sinclair with other people from the HESA general assembly meeting earlier that evening.

He wrote that when Rizek arrived, he asked her to apologize to the other HESA members present for her behavior at that night's meeting, which Khan said had been received as “rude and distracting.”

“She responded that she wouldn't apologize,” Khan wrote. “She then indicated that she would not leave, which was fully her right, but I was uneasy given the tensions created due to the aforementioned experience at the assembly.”

“She screamed at me, I remember she said ‘I am a student, and I can be with you guys,’” Khan added. “At this point, Nor pushed me out of the way and left some scratches on my arm from her nails.”

Khan wrote that Rizek later began arguing with another student, which he said escalated to a “physical altercation.”

He wrote that a stranger stepped between them and the bouncer eventually escorted Rizek out of the venue. He added that none of the other people in the group, including himself, were forced to leave the venue.

Khan wrote that Rizek later repeatedly asked her friend and fellow Extension School student Anna M. Ray to request that Khan testify that the other student hit Rizek first so that Rizek could press charges against the individual.

Ray confirmed Khan’s account in an interview last month and identified the other student as former HESA president Carmen Gardner, who also goes by the name Carmen Hines. Warnick confirmed that Hines also filed a police report about the incident on November 12.

Hines did not respond to multiple requests for comment.

“Nor has a great deal of frustration with me for not ‘taking her side’ in this matter,” Khan wrote.

Rizek said she was distressed for several months after the altercation.

“I was traumatized. I just stayed away from campus after that. And that's why I never said anything or press charges because I just wanted to be done,” Rizek said. “I just wanted it all to go away.”

However, after Rizek learned the HESA race had come down to a tie between Khan and Manzo upon reading an email from the school reminding students to vote in the election, she said she recalled the incident.

“I came forward when I saw that Jacob and Dale were tied for presidential candidate. And when I saw that, I just got sick to my stomach,” Rizek said. “Even though the event didn't happen on campus property — and that's why the school stated that they couldn't do anything for me or the situation — I knew that students had to know what had happened.”

“I am very sorry to hear that a fellow student is under duress, particularly as we prepare to enter finals,” Khan wrote in an email.

Division of Continuing Education spokesperson Harry J. Pierre wrote in an email that administrators would not comment on specific matters in respect of student privacy.

“We take any allegation of assault seriously and have a student conduct policy that we expect all students to adhere to,” Pierre wrote.

Those who violate the Extension School’s conduct policy — which expects students to conduct themselves “responsibly, honestly, and with due respect” — may face disciplinary action including withdrawal or suspension.

Soon after Rizek’s post went live, her allegations immediately drew backlash. Several students in the Extension School students’ Facebook group accused her of colluding with Manzo to pull voters from Khan, according to Rizek and Manzo. Rizek said many students accused her of being a “liar” and having ulterior motives.

Both Rizek and Manzo denied knowing each other personally prior to Rizek’s post. Manzo said he does not have enough information to determine what occurred between Khan and Rizek.

“I want to be extremely clear that I presume innocence here because I don't want it to appear that I either think that she lied or think that he's an assaulter,” he said.

Manzo said he first communicated with Rizek when she messaged him on Facebook just before posting about Khan.

“She messaged me through the Facebook Messenger, where I had been fielding lots of messages from people regarding the election platform questions,” he said. “She said I support you based on your platform issues, but even more so because of what Jacob did to me.”

Rizek said Manzo had no prior knowledge that she would publish a post endorsing him.

“He had no idea who I was,” Rizek said. “I had added him on Facebook that day.”

In an April 28 email, Mark Addison — interim assistant director for Student Activities at DCE — asked Manzo to immediately remove Rizek’s post in the Facebook group or risk the elections committee withdrawing his candidacy, according to a copy of the email obtained by The Crimson.

Addison cited an election rule that barring candidates from engaging in “negative campaigning” in his email.

Manzo eventually emailed a statement to Addison on April 30 denying that he knew Rizek personally, suggested she publicly express her grievances against Khan, or had advance notice of that post being published, according to a copy of the email obtained by The Crimson. He also wrote that he was neither a member nor an administrator of the HES Facebook page when the post was published.

When Rizek learned administrators had threatened to remove Manzo from the election, she said she also immediately sent them a statement confirming that Manzo did not know her beforehand and never requested she publish her allegations. She also attached a screenshot of her and Manzo’s first conversation over Facebook Messenger the day she made her post.

Hours after Rizek’s message went live, a moderator eventually deleted her post and removed her from the group, preventing her from viewing and publishing content on the page.

Asked to comment on Addison and Manzo’s correspondence, Pierre, the DCE spokesperson, wrote in an email that the school would not comment on “supposed private” conversations between a staff member and a student.

“DCE does not have any control over student-created websites and therefore would not be able to edit or control the content,” Pierre also wrote.

Some students involved with the election expressed disdain at the Division of Continuing Education’s role within the HESA election process as a whole.

A HESA executive board member said DCE officials instructed the board to direct media inquiries to Pierre. The board member spoke on the condition of anonymity, saying they were not authorized to speak to The Crimson.

“I heard from Mark that there was someone from The Crimson writing a story. I emailed Mark to be sure: what are the conditions or limitations that we have to talk to The Crimson?” the board member said.

“He only said, literally, ‘Refer everyone to Harry from the media department,’” the student added.

The board member said many others on the HESA executive board shared a sense of frustration with the administration and elections proceedings.

“Every single board meeting that we've had, it was kind of discouraging to hear the new things, the new events — but not only the election, pretty much our whole process,” the board member said.

Manzo said he believes the controversies over the HESA election unfairly distracted from Rizek’s allegations.

“I always thought that the Harvard community was better than that,” Manzo said. “That at least if a woman came forward — though I would actually discourage you from all of a sudden wanting to crucify the guy accused — we wouldn’t silence her.”

“The bigger story here is not the HESA election,” he said. “It's on how we treated a woman coming forward.”