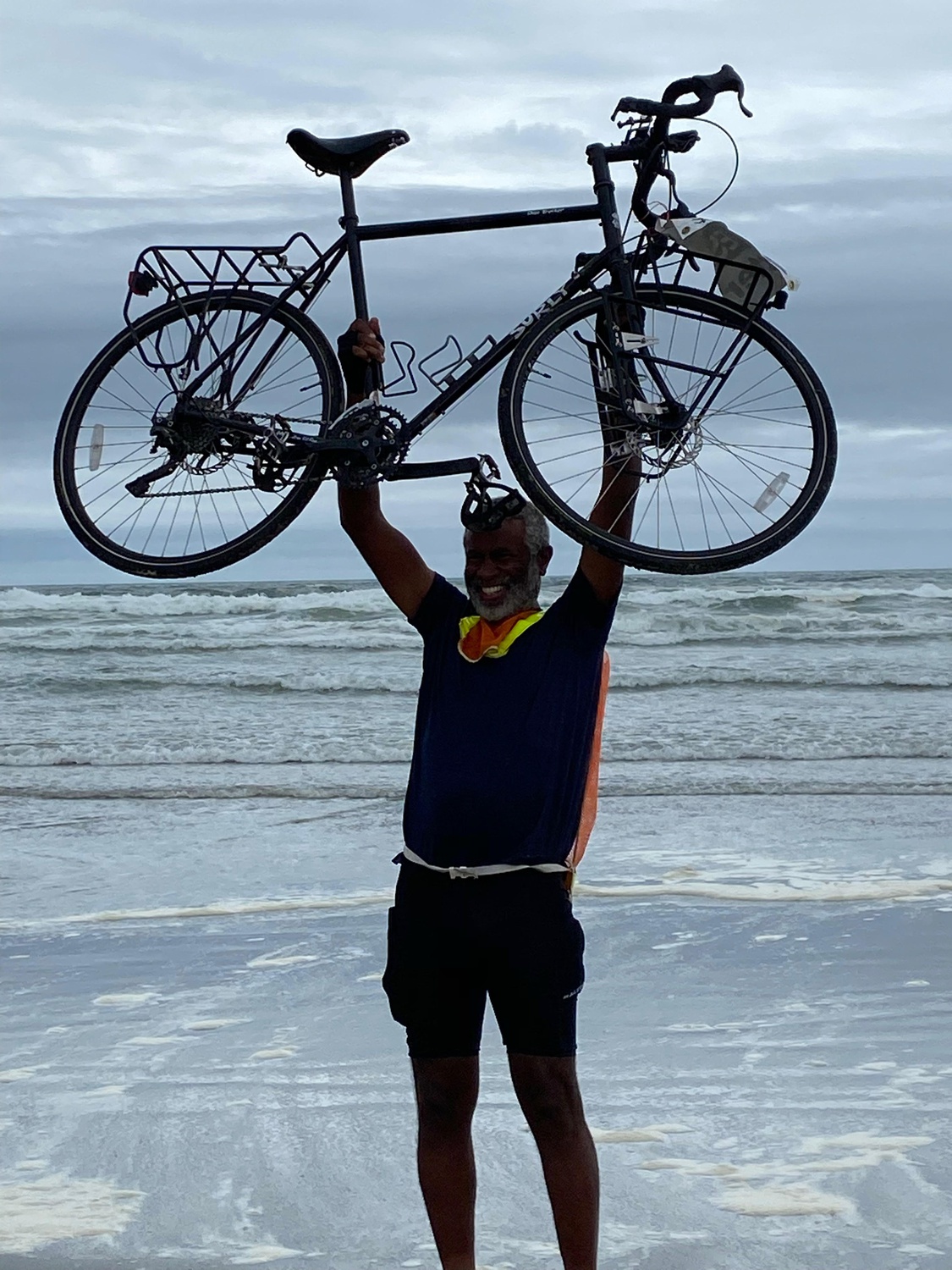 Edwards celebrated the feat with a live stream for the more than 11,000 Twitter followers he amassed over the course of the trip.

“It's just hard to believe I’ve actually done it,” he said in an interview Thursday afternoon. “I think the moral of the story is many small steps made for big leaps — I can't believe that I've cycled so far.”

“All the different kinds of people I met and situations I was in and landscapes — it’s a really great way to see the country,” he said. “I would recommend it for anyone.”

In the live stream, he added he was touched by the “amazing acts of kindness from lots of people” over the 3,200-mile journey.

“It gave me a lot of hope for the country, really it did,” he said.

Edwards’s long-planned trip came to be shaped by the twin events that defined summer 2020 in the United States: the coronavirus pandemic and protests for racial justice following the murder of George Floyd at the hands of Minneapolis police.

Edwards, who is Black, said the protests gave his trip deeper meaning as he used the attention he received to champion causes such as Black Lives Matter and diversifying the sciences.

This summer’s racial justice protests were in part sparked by an incident close to Edwards’s work in avian biology and position as curator of Harvard’s ornithology collections. On May 25, the same day police killed Floyd, a white woman in New York’s Central Park called police on Black birdwatcher Christian F. Cooper ’84. Cooper’s video of the incident went viral and sparked the creation of Black Birders Week, which Edwards helped champion.

Though Edwards said he had decided to make the trip before the Central Park incident, it inspired him to join Twitter, where his frequent tweets about bird sightings and his experiences as an African-American man in nature quickly gained attention among ornithologists. He frequently labels his tweets with #BlackBirdersWeek, #BlackInNature, or #BlackLivesMatter.

In late June, Edwards set up a GoFundMe to collect donations for initiatives to diversify the field of evolutionary biology. With the social media attention from his ride, the fund had raised over $56,000 as of Thursday.

Within a few days of setting out, Edwards also affixed Black Lives Matter signs to his bike.

“It's generated a lot of conversations that I probably wouldn’t have had without the signs on my bike,” Edwards said.

Edwards said he has encountered a few racist comments over the course of his trip, which he chronicled on Twitter. On June 26, an 84-year-old white man in Monroeville, Ind. told Edwards that “blacks got here when God ran out of white paint,” Edwards tweeted. Three days later, a campground turned him away because of his Black Lives Matter sign.

He tweeted July 25 that he removed the signs for periods of the trip, noting that he found it “tough enough being a lone black man” in certain states.

However, Edwards said he has appreciated the conversations he has had with many people during the journey, particularly in America’s conservative heartland.

“It’s always interesting to hear why people think and lean politically the way they do,” he said. “I think it's really important to listen to those sorts of perspectives.”

Edwards said he would typically spend the summer doing fieldwork in countries such as Mongolia with his graduate students, but with international travel curtailed by the pandemic, he seized the opportunity to take the trip he had hoped to make for years.

“I always wanted to go cross-country — it’s a good way to see the country and see the landscapes,” he said. “As COVID came around, all my summer activities were being canceled and I said, ‘Well, this is a good time.’”

He set off June 6 from Newburyport, Mass., dipping his tires in the Atlantic Ocean. He averaged around 50 to 60 miles per day, passing through 15 states and several mountain ranges, including the Rockies.

Edwards said he stayed mostly in campgrounds and the occasional hotel, always wearing a mask and trying to maintain social distancing.

“My average social distance is probably higher than it would be at home,” he said.

Edwards, 57, carried all of his equipment on his touring bike — not relying on any support vehicles. He suffered two flat tires early in the trip, but the bike has otherwise held up.

He said the biggest challenges have mostly been physical and mental, especially riding alone for extended periods of time.

On the Twitter live stream, Edwards said he was grateful for all he had learned about the country as he biked across it.

“One great thing about cycling is it allows you to go slowly enough that you can intersect with people and talk to them and learn about them, learn what motivates them,” he said. “It’s been great to have that opportunity.”