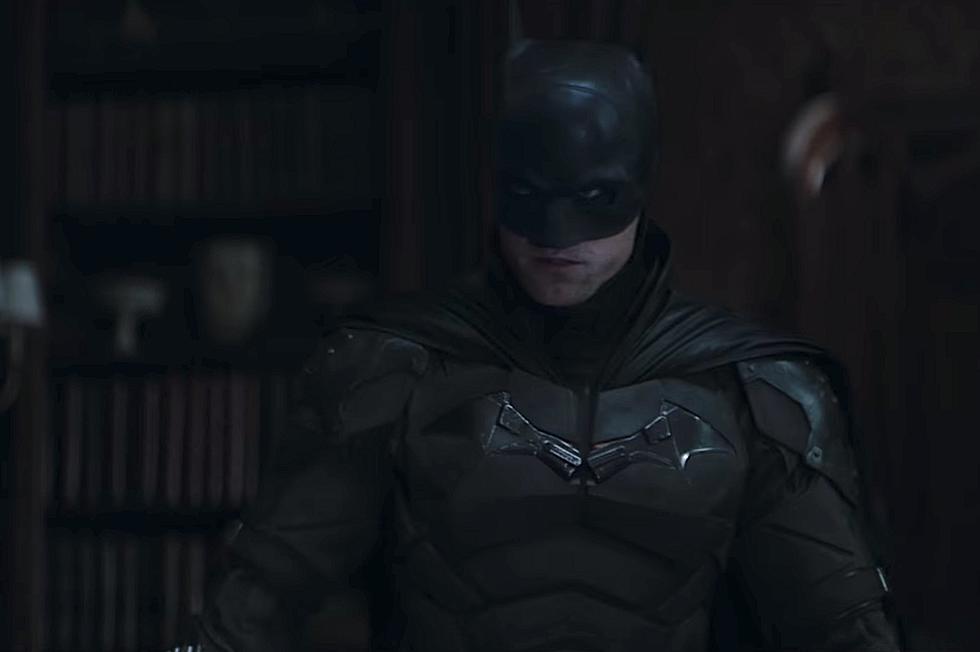 Robert Pattinson as the titular Batman in the upcoming film. By Courtesy of Warner Bros. / YouTube
By Millie Mae Healy, Contributing Writer

The trailer begins with an ominous ripping noise. A villain — a large man wearing all-black clothes and a matching mask — is duct-taping a businessman’s face. “No more lies” is written over the duct tape on the businessman’s face. There’s a breath, then silence.

With that, we plunge headfirst into the dark, dangerous world of “The Batman.” Haunting music — “Underneath” by Haider Ali — starts to play, and narration by Jeffrey Wright as James Gordon begins, completing the classic movie trailer build-up. Suddenly, we see the first shot of the police investigating the crime of a moment ago. Batman’s boots walk across the screen. Detective Gordon then holds up a card with “To the Batman” written in childish handwriting.

It appears that someone did not listen when literally everyone said to drop the “the.” Who would write “to THE Batman?” Is there more than one?

Next, we see a shot of Batman in full costume at the crime scene with the police. Perhaps this iteration of Batman will be on better terms with law enforcement? Cameras flash. Robert Pattinson, playing the titular Batman, lurks in the bushes, watching a man be photographed.

A car drives into a funeral, attempting to mow down mourners, and Pattinson pulls someone out of the way. Who could be dead? A man gets out of the car wearing a suicide vest, and he doesn’t appear particularly thrilled about it.

When we catch a glimpse of the Bat Cave, it looks like it could honestly be the exact same set from the “Batman Begins“ trilogy. Our first shot of Zoë Kravitz as Catwoman is brief. It’s not yet clear whether Jacqueline Durrand, the costume designer, should be fired like most who work with women in superhero movies besides Lindy Hemming, who was responsible for costuming “Wonder Woman” and set a new standard for the industry that was promptly ignored. In any case, it needs to be said that her mask looks ridiculous.

Next come several rapid shots in quick succession: police, Batman in a cage, guns, darkness, and a fight between Batman and Catwoman. Does this entire movie happen at night? It sure looks like it. The emerging trend of movies getting darker is baffling since film is… a visual art form?

We cut to a gentleman wearing skull makeup asking “Who’re you supposed to be?” With the return of the classic Batman voice effect, Batman replies: “I’m vengeance.” Wow, the character of Batman has never before been associated with vengeance!

For viewers lacking in knowledge of cars (yes, we exist), there is a possibly impressive shot of the Batmobile. This is followed by another series of quick shots, primarily occurring outside in the rain and, shockingly, even some at night! Someone says: “This guy’s crazy!” Although we are given no evidence to use to judge this statement.

A new Batman logo — in red instead of yellow! — glides in. Batman wonders out loud how he’s involved in the mystery that will most likely form the film’s plot, and a disembodied voice replies “You’ll see.” A shot of Pattinson shows him wearing a shocking amount of eyeliner, à la the Winter Soldier from 2014’s “Captain America: Winter Soldier.”

This latest trailer is mostly atmospheric and only teases at a plot: an inciting murder, a (likely unrelated) funeral that is highjacked, unwilling suicide bombers, a public figure at an outdoor press conference, police involvement, and a motif of lies. Furthermore, the villain of choice appears to be The Riddler, which has the potential to be very interesting.

While many of the hallmark elements of Batman— the darkness, the vigilante action — don’t seem to have changed, this is not necessarily a bad thing. An objectively good but unsurprising story would be preferable to one that changes things and attempts to shock the viewer purely to differentiate itself. It seems they’re going for the classic Batman, and with the success of the current trend of nostalgia cash-ins (looking at you, Disney live action remakes) this film could do very well.

“The Batman” is due out in cinemas sometime in 2021. Watch the trailer here.