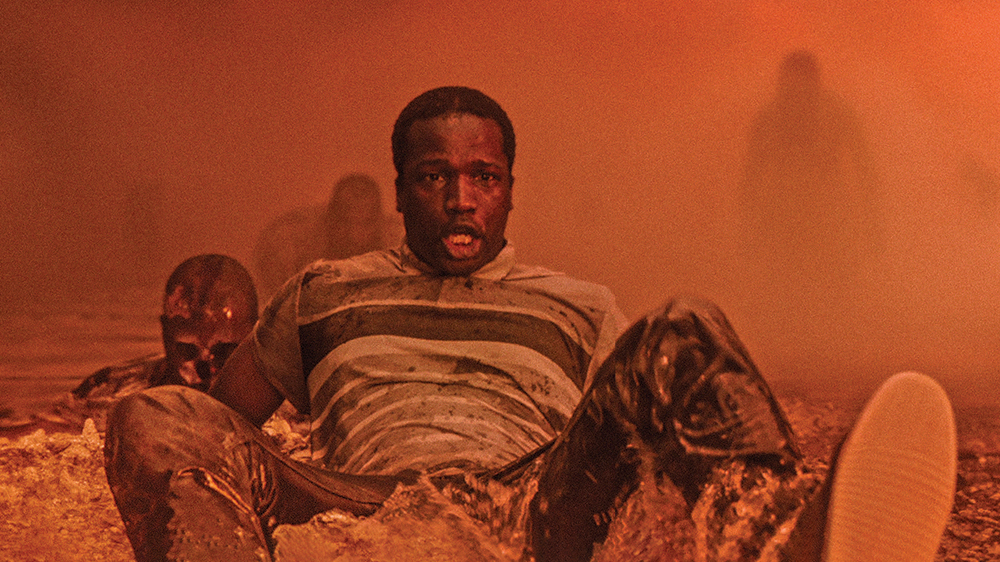 Remi Weekes’ 2020 horror film “His House” features its fair share of ghastly creatures — but it just may be that the actual spectres aren’t nearly as scary as the social and psychological ones. Weekes’ first feature-length film is a notable entry into the canon of socially relevant horror films, applying elements of the genre to a fresh context: political refugees attempting to make a home in a new country. Both visually and narratively compelling, “His House” is an affecting portrait of trauma, guilt, and the refugee experience.

The film’s opening sees Bol (Ṣọpẹ Dìrísù), Rial (Wunmi Mosaku), and their daughter Nyagak (Malaika Wakoli-Abigaba) fleeing from violence in their South Sudanese hometown. The couple learns that they have been granted asylum in England and will be assigned to a home where they must abide by a strict set of rules to remain in the country. After moving into their new home, however, the couple soon realize that they’re far from alone: Strange noises in the walls, shadowy figures, and other strange phenomena haunt Bol and Rial with increasing frequency as they attempt to adapt to their new life and — as their case worker Mark (Matt Smith) tells them, — to “get along, fit in… be one of the good ones.”

Ultimately, Weekes’ subversion of classic horror tropes allows for a poignant exploration of survivor’s guilt: The run-down house that Bol and Rial move into isn’t already haunted — the couple brings its many supernatural tormentors with them. Furthermore, Weekes puts a fresh spin on conventions of the horror genre by incorporating South Sudanese mythology and spiritual belief into the film’s lore. At one point, Rial explains that she believes the evil lurking in the house to be an apeth, or a night witch that demands a sacrifice. She tells her husband, “an apeth has arisen from the ocean… it has followed us here. It said we don’t belong here.”

The film is not overly reliant on jump scares or lengthy action sequences; it is the presence and persistence of the ghosts — which are brought to life with truly striking makeup and visual effects — that is most frightening. Weekes ultimately creates an effective metaphor for the loss and remorse that plague the refugee couple, wherein the grotesque becomes a physical manifestation of trauma, memory, and regret.

Weekes’ direction and Jo Willems’ cinematography also capture a plethora of striking visuals. Willems’ clever use of light and shadow motifs quite literally illuminates different facets of the refugee experience. Whereas shots inside the couple’s home eerily juxtapose flickering lights and darkness, scenes set in British establishments are graded in bleak, pallid tones; each lighting technique creates a distinct sense of unease. But Willems’ horror-related shots are especially terrifying — and beautifully evocative. In one particularly memorable sequence, Bol sits at the dinner table with his wife; however, the camera soon pulls back to reveal Bol, alone, his wife having disappeared from the frame. In this surrealist shot, the half-destroyed kitchen wall stands in front of a blood-orange sky, and Bol finds himself and his kitchen table half-submerged in zombie-infested waters.

Weekes artfully interpolates flashbacks with present-day action for a narrative that unfurls gradually to a satisfying end. As the film progresses, the story of Bol and Rial’s harrowing journey — and the true reason for their immense guilt — is slowly revealed. This narrative technique can get a bit confusing, but it exemplifies the interconnectedness of memory, feeling, and the past: It is only when this murky backstory is fully divulged to the audience — and confronted by its characters — that our protagonists can truly begin to contend with their demons. Dìrísù and Mosaku’s performances are stunning and sympathetic: The two are raw and believable in their portrayals of fear and desperation, ultimately embodying two divergent approaches to acclimatization. Though the film utilizes dialogue somewhat sparingly, its script is precise, revealing many plain truths about the psychological and physiological toll of relocation and attempted assimilation.

Despite being a thriller, “His House” takes its time, a choice that makes its message that much more impactful. Bol and Rial’s new home is threatened not only by an internal darkness, but also by less obvious institutional evils. Subtle moments throughout the film illuminate microaggressions that are all too familiar to many people of color — and are scary in a very real way.

However, it is the film’s notable conclusion that truly drives home its singular take on everyday social horrors. Weekes subverts genre conventions one last time in the film’s conclusion, redefining notions of victory and survival for his characters: Bol and Rial’s ultimate triumph over the apeth does not signify the end of their psychological torment. Indeed, just as the film's title suggests, Bol and Rial’s house might never truly feel like it belongs to them alone as their past will always be with them. But it is their acceptance of this fact — and their decision to keep moving forward regardless — that makes it their own.

Staff writer Jamila R. O’Hara can be reached at jamila.o’hara@thecrimson.com