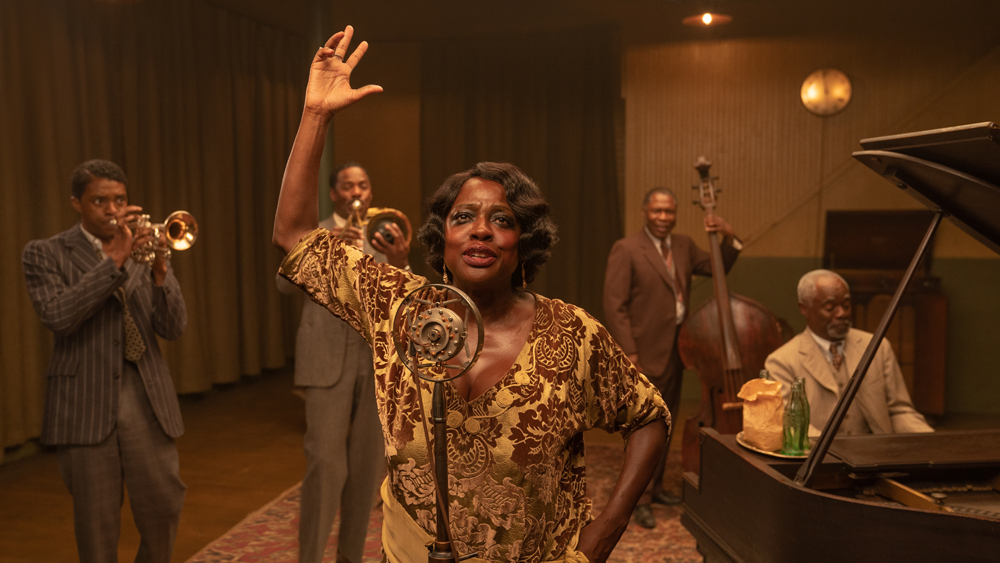 The year is 1927, and blues legend Ma Rainey has just arrived in Chicago to record her latest album, accompanied by her Georgia Jazz Band. Outside in the midsummer heat, temperatures are rising. Inside the studio, fierce ambitions and disparate passions mean that tempers are heating up as well.

Directed by acclaimed playwright George C. Wolfe and written by Ruben Santiago-Hudson, “Ma Rainey’s Black Bottom” is based on August Wilson’s 1982 play of the same name. The film stars Viola Davis as the spirited ‘Mother of the Blues’ and the late Chadwick Boseman as Levee Green, Ma’s talented but overconfident trumpeter. The film is dedicated to Boseman, who passed away in 2020; his affecting portrayal of Levee is his final film appearance.

Like its source material, the film’s focus is precise and its narrative time frame narrow, taking place over the course of a single afternoon. Nevertheless, its in-depth exploration of one fateful recording session reveals a plethora of plain truths about racism and systemic oppression in America that remain resonant to this day.

From its very first scene, the film makes it palpable that Ma Rainey’s immense talent and captivating stage presence has had an indelible influence on the Blues genre — and music in general. Indeed, the film’s opening scene illustrates Ma’s growing success and preeminence through a lively and soulful performance of “Deep Moaning Blues” that is split between two locations: a down-to-earth venue in Barnesville, Georgia and a large, glamorous venue in the north. “Ma Rainey’s Black Bottom” takes place in the midst of the Great Migration, during which millions of Black Americans moved from the rural south to northern cities in search of employment and economic prospects. But as many would soon realize, the north was not the land of opportunity that white employers would have Black communities believe. The industries and structures underpinning northern urban epicenters were — and still are — just as fraught with systemic racism as their southern counterparts. “Ma Rainey’s Black Bottom” shows us that the music industry is no exception.

Following the film’s gorgeous opening sequence, band members Levee (Boseman), Toledo (Glynn Turman), Cutler (Coleman Domingo), and Slow Drag (Michael Potts) begin rehearsing in a Chicago studio. As the band plays and riffs together, Wolfe subtly reveals existing tensions within the group: We learn that the highly ambitious Levee seeks to secure a record deal and start a band of his own, a scheme that the rest of the band disapproves of. Ma shortly arrives late to the studio, much to the frustration of her dismissive white producers, including her manager Irvin (Jeremy Shamos), who repeatedly seek to alter or rush her creative process. Ma, however, remains bold and unapologetic in her advocacy for herself and her band.

Santiago-Hudson’s script is insightful and beautifully layered as the film explores the many manifestations of racism in the music industry and exposes producers’ manipulative goals. The film impressively balances each of its characters, particularly as numerous personal and professional disagreements begin to emerge among members of the band. Levee and company were not real people — but they certainly feel like it. Indeed, even the band members with the fewest lines feel honest and fleshed out: Santiago-Hudson thoughtfully examines each character’s individual experiences with the music industry’s exploitation of Black brilliance.

While the film's impressive costume design, makeup, and lighting (at times warm, at times theatrical) notably contribute to the film’s stylish visual intrigue, it is the film’s stellar cast and powerhouse performances that are perhaps most outstanding. Unsurprisingly, Viola Davis dazzles as the brazen and fiery Ma Rainey, an inspiring example of a Black woman who revels in her own artistry and unapologetically demands the treatment she deserves from an industry that seeks only to profit from her talents. At one point, she tells Cutler, “All they want is my voice. Well, I done learned that. And they gonna treat me the way I want to be treated no matter how much it hurt ‘em.” In Davis’ hands, Ma Rainey is also a delightful performer: The actress is a joy to watch in the film’s musical scenes, each a delightfully vibrant celebration of Blues in its own right.

Boseman’s performance is similarly stunning. Boseman channels his immense talent into exploring the nuances of Levee’s drive, distress, and, ultimately, his doomed sense of hope. The emotional impact of Levee’s impassioned soliloquies is further deepened by cinematographer Tobias A. Schlisseler’s strategic use of long takes and slow zooms focused on Boseman. These techniques allow audiences to plainly feel Levee’s frustration and desperation, even through the film’s dramatic conclusion.

Ultimately, “Ma Rainey’s Black Bottom”’s captivating visuals, radiant performances, and celebration of the Blues in its music and sound design make for an affecting meditation on Black art and racism in the entertainment industry that unfortunately feels as timely as ever.

— Staff writer Jamila R. O’Hara can be reached at jamila.o’hara@thecrimson.com.