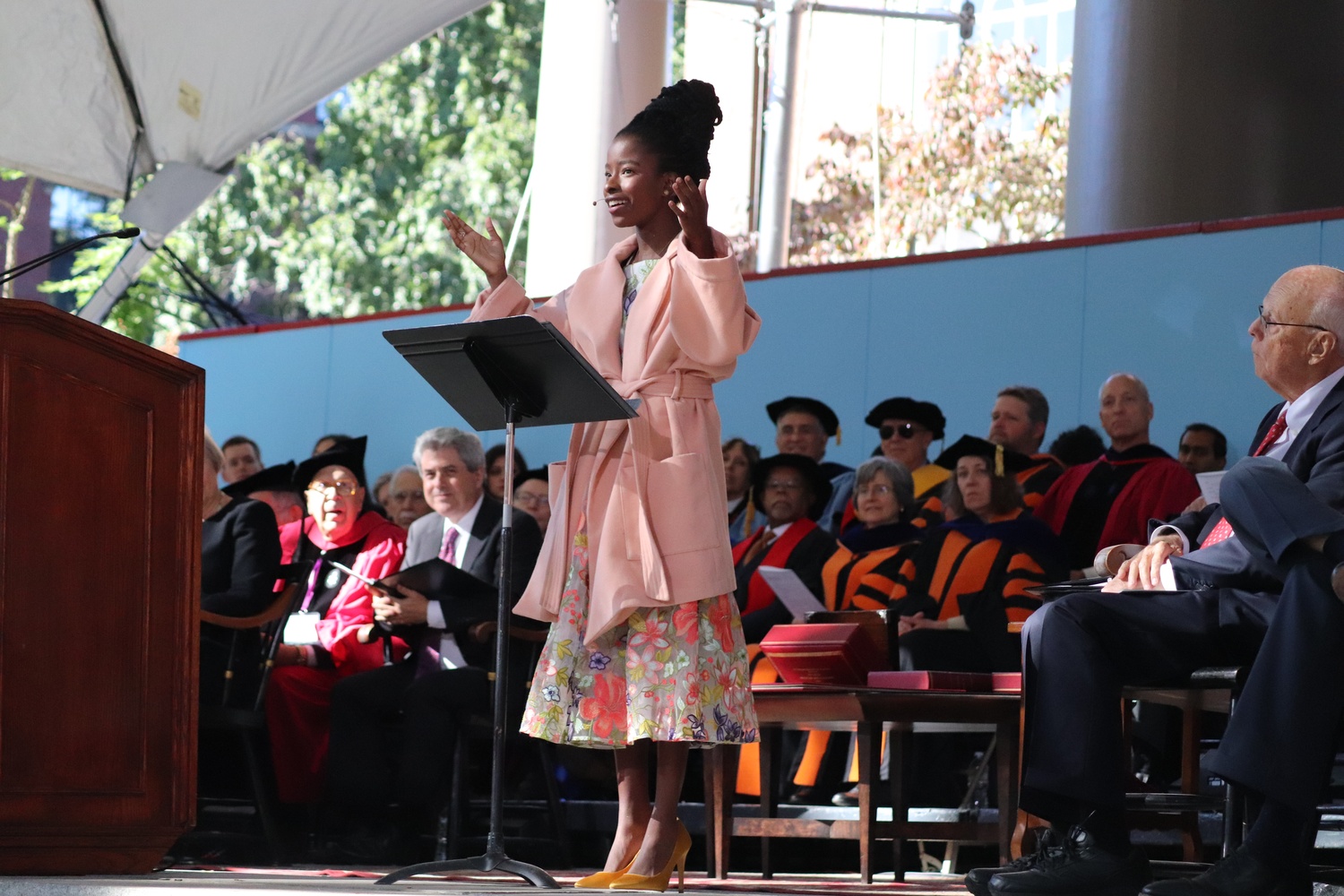 The first National Youth Poet Laureate Amanda S. C. Gorman ’20 will recite an original poem at the Super Bowl LV pre-show on Feb. 7, following a streak of success that led her to the nation’s Capitol to perform at President Joe Biden's inauguration last week.

Since she performed her inaugural poem, ‘The Hill We Climb,’ Gorman’s three books — “The Hill We Climb: Poems,” “Change Sings: A Children’s Anthem,” and “The Hill We Climb: An Inaugural Poem for the Country” — became the top three bestselling books at Amazon, Barnes & Noble, and Powell last Friday. Gorman also signed to IMG Models — a modeling agency that represents Bella Hadid, Ashley Graham, and tennis player Naomi Osaka — the company announced Tuesday.

Sociology professor Jocelyn S. Viterna — who met Gorman during her freshman fall at Harvard — said the poet’s focus on art and passion for social reform “expanded” the way the department thought about its own discipline. Viterna added that Gorman and her classmates ultimately brought about a “complete revision” in the way that the department taught theory.

“She was invested in Harvard and didn’t just pass through and get her degree,” Viterna said. “Harvard is a better place because she was here and because she was thoughtful about the program and her place in the community.”

Viterna said she enjoyed watching Gorman make arguments in class because of the power and purpose that animated her words. The poem performed at Biden's inauguration, Viterna said, embodied Gorman’s long-standing desire to inspire change.

“I appreciated how she was able to capture the reality of what we’ve gone through,” Viterna said. “She was still able to imagine a force for change in the future and that’s one of the things that feels very emblematic to me about Amanda.”

Laura Gorman Thomas, the sociology department’s undergraduate advising and program administrator, met Gorman during her sophomore year. The poet's “self-assuredness” made a lasting first impression, said Thomas, who is not related to Amanda Gorman.

“There was something about the way that she carried herself,” Thomas recalled. “The first thing she said to me, once we introduced ourselves and she was sitting across me, she said, ‘I will be president in 2036.’”

“And I have no doubt she will be,” Thomas added.

Despite the poet’s achievements and frequent speaking engagements outside of class, Thomas said Gorman remained humble and involved in her studies.

Thomas added that she watched Gorman’s inaugural reading multiple times and was “amazed by her words.”

“I was very excited and proud of her, but I’m not surprised. I know how smart she is,” she said.

NYU professor of sociology Bart Bonikowski, who formerly taught Gorman at Harvard, wrote in an email that the poet’s “intellectual playfulness” and creativity fuel her “very serious goal” of exposing societal flaws and creating hope.

“Amanda is simply remarkable: a brilliant poet, an exceedingly generous and kind person, a tireless activist, and a top-notch researcher,” he wrote. “There is also a certain vulnerability to her creative work and personal disposition that I greatly value.”

“It was an emotional hour, and I distinctly recall Amanda asking typically astute questions, but also being frank about the sense of foreboding she felt about the political changes to come, which would disproportionately affect communities of color,” he wrote.

Bonikowski added he was “thrilled,” four years later, to see Gorman take the stage on a historic day for the nation.

“That her reading followed the swearing-in of the first woman, first Indian-American, and first Jamaican-American Vice President, and that the day marked the end of a particularly shameful four years of our history, made the moment all the more profound,” Bonikowski wrote. “And yet, Amanda not only rose to the occasion—she stole the show.

Bonikowski said he considers himself “lucky” to have known Gorman and witnessed the rise of her career, but noted that she is “just getting started.”

“I have no doubt whatsoever that we will all continue being impressed by her for many years to come—and that the world will be a better place as a result of her brilliant work,” he wrote.