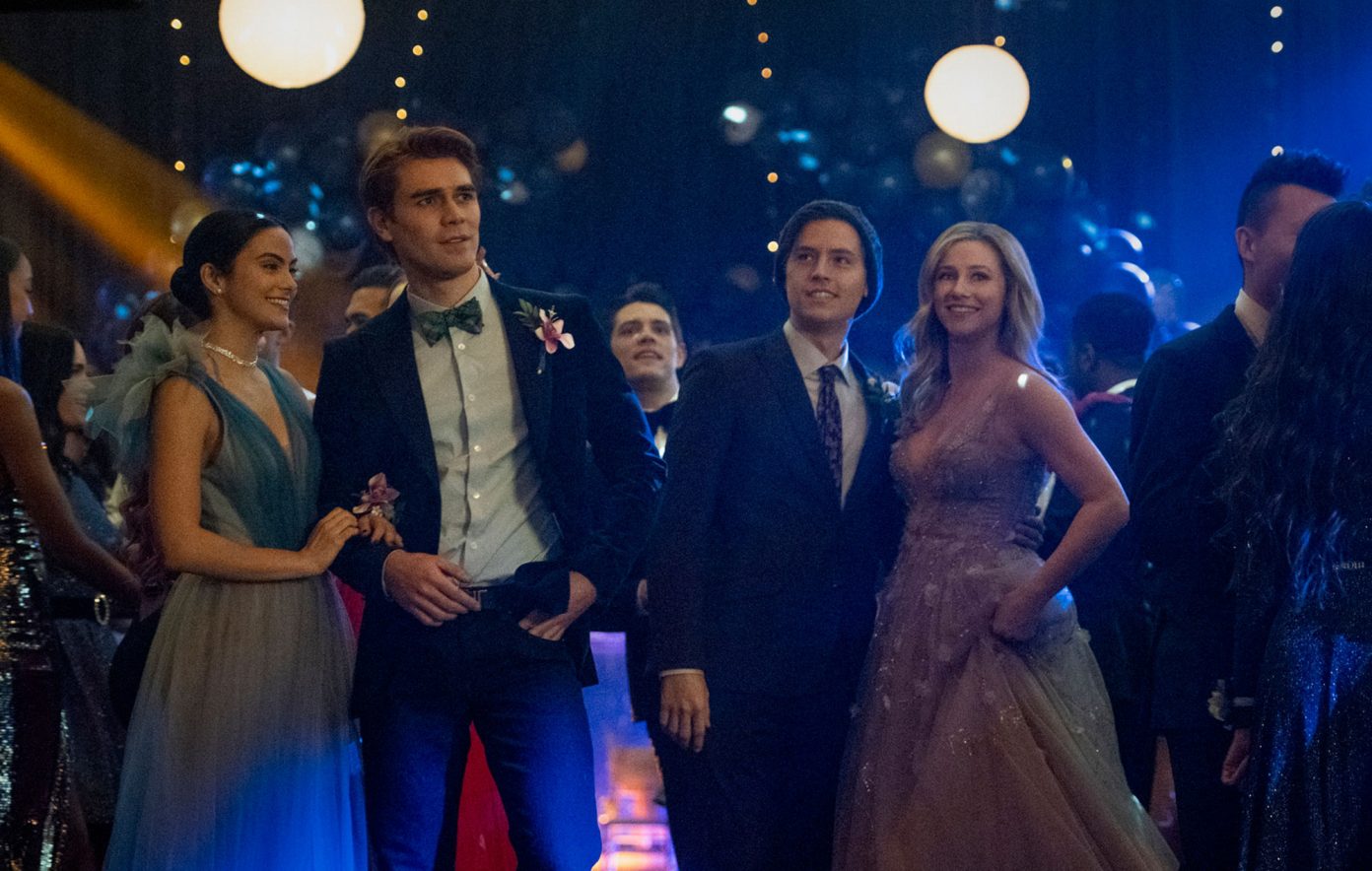 Camila Mendes as Veronica, K.J. Apa as Archie, Cole Sprouse as Jughead, and Lili Reinhart as Betty in "Riverdale." By Courtesy of Netflix

The Season Five premiere of “Riverdale” asks the eternal question: Is it so bad it’s good, or is it just bad? The CW’s hottest (and, admittedly, most fun) mess is back for another season that might finally confirm whether “Riverdale” is more the former or the latter. Over the past four years, the show has evolved from a delightfully campy high school drama that delivered a stylish and satisfying murder mystery in Season One to a hodgepodge of what-am-I-watching moments whose unpredictable plots and comically awkward dialogue have risen to internet infamy and continued to dominate television discourse online. For now, however, it seems that the cults, demonic board games, covert organ farms, and musical episodes are (sort of) in the rearview mirror as Archie Andrews (KJ Apa), Betty Cooper (Lili Reinhart), Jughead Jones (Cole Sprouse), Veronica Lodge (Camila Mendes) and friends finally wrap up their last year at Riverdale High.

But if the Season five premiere doesn’t really feel like a season premiere, that’s because it isn’t. Like many television shows, “Riverdale” abruptly shut down production in March due to the coronavirus pandemic. As such, the first three episodes of Season Five pick up exactly where Season Four left off, providing a conclusion and postscript to Season Four’s unfinished arc before moving onto new material — definitely a plus for a show with notably murky season-to-season continuity and a tendency to abandon burgeoning storylines mere episodes after their introductions.

Last season, writers set out to reground the show in the high school drama supposedly at its story’s core, but in truth seemed far more concerned with the numerous businesses and establishments its 17-year-old protagonists now own (at least Barnard seemed impressed that Veronica runs a nightclub?). The opening of Season Five, however, more or less follows through on the writers’ original promise, allowing Archie and Co. to do at least a few normal high school things before graduation: namely, go to the prom, which no one with the exception of Cheryl Blossom (Madelaine Petsch) seems to care very much about — understandably so, since, as always, the show’s protagonists have much bigger (and weirder) fish to fry.

And it seems that Betty and Archie’s fake dating exploits from last season have lasting repercussions for each of their relationships, as we learn that the perpetually indecisive Archie still harbors feelings for Betty. He eventually divulges this fact to Veronica, but not before she discovers and performs a song Archie actually wrote for Betty. Ironically enough, the rekindling of a love triangle that epitomizes cliche just might be the one thread of this story that stirs the pot in a semi-satisfying manner going forward — because somehow the same show that gave us the Gargoyle King and a season arc about a drug called Jingle Jangle writes pretty bland relationships. It’s certainly high time that “Riverdale” shook up its two stagnant main pairings, which have grown stale and, in Betty and Jughead’s case, borderline incestuous (they share a biological half-brother, because of course they do).

But for an episode entitled “Climax,” this season’s premiere is surprisingly tame, arguably anticlimactic. There are a few moments key to the show’s latest convoluted mystery — for example, when prom is interrupted by another violent broadcast from the Auteur, an anonymous individual who has been distributing voyeuristic videotapes of Riverdale homes being watched— but the “Riverdale” writers’ poor track record in matters of continuity pretty much ensures that stakes never feel high and villains always feel disposable.

As the internet knows, “Riverdale” just isn’t the glossy thriller it purports to be. But perhaps unfortunately, Season Five’s debut doesn’t lean quite as hard into the hilarious nonsensicality of its previous seasons, either. In reality, the episode accomplishes little beyond delivering a largely unexciting prom sequence brightened only by the show’s consistently strong costume and set team and the vaguely interesting choice to break up a few of its couples.

However, finding new ways to work within the show’s already outlandish world might just create new possibilities for growth in the upcoming season, which promises somewhat of a departure from its wayward narrative trajectory in at least a few ways. Creator and executive producer Roberto Aguierre-Sacasa confirmed that Season Five would see a seven-year time jump: launching “Riverdale” several years into the future seems a promising solution to both the cast’s unbelievability as high schoolers and the plot’s tendency to stray wildly from typical teen drama genre territory (when’s the last time any of these characters actually went to class?). Hopefully these coming changes will also bring radical amendments to the show’s underutilization and serially shoddy treatment of its queer and nonwhite chracters, especially following actress Vanessa Morgan’s now-viral critique of the writers room’s handling of the show’s Black characters.

Indeed, “Riverdale” Season Five presents its creative team with an opportunity to rein their show in — or to let it go completely. Either way, let’s hope Twitter can milk some good memes from it.

— Staff writer Jamila R. O’Hara can be reached at jamila.o'hara@thecrimson.com.