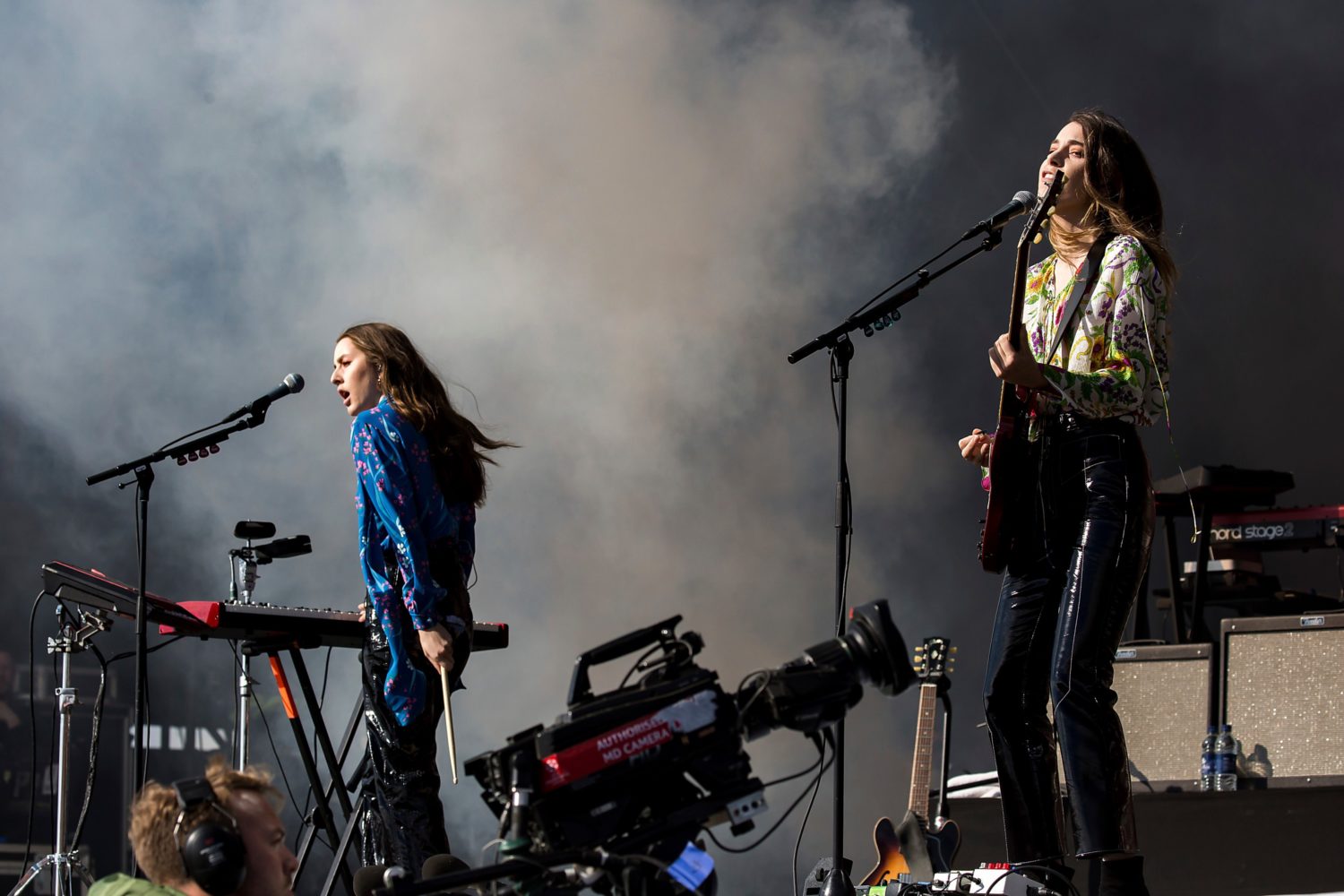 Two of the Haim sisters in concert
By Sofia Andrade, Crimson Staff Writer

As long as the genre has existed, rock n’ roll has been powered by women — this much is no secret. From Sister Rosetta Tharpe, the queer Black trailblazer who became rightfully known as the “godmother of rock n’ roll for her sensational guitar solos and powerful voice, to Patti Smith, the “punk poet laureate” who was instrumental in the creation of punk as both a culture and a genre — rock n’ roll women have been breaking the boundaries of what is accepted and celebrated in the genre.

Now, for the first time ever, all of the nominees for the Grammy Awards’ best rock performance category are women or female-fronted bands: Fiona Apple, Phoebe Bridgers, Haim, Grace Potter, Brittany Howard, and the band Big Thief (lead by Adrianne Lenker).

For decades, the Grammys have been criticized for paying attention only to white men across genres. It’s no surprise, then, that the all-women slate of nominees has stirred up considerable buzz — especially a year after former head of the Recording Academy Deborah Dugan released a scorching claim against the Grammys fordiscrimination after they fired her, asserting that the “gender gap at the Grammy Awards is real.” Indeed, from 2013 to 2018, only 9.3 percent of the nominees in the five major Grammy Awards categories were women.

In a genre as outwardly male-dominated and exclusive as rock, the gender gap is only more prevalent. A female-fronted group hasn’t won in the Best Rock Performance category since Howard’s band Alabama Shakes in 2016. Alabama Shakes was also the only female-fronted band to win the award since the category’s inception in 2012, and the slates for three of the award’s last nine years included no female-fronted nominees at all.

While far too late in the game, a set of nominees composed exclusively of women is still groundbreaking for the iconic awards ceremony.

“People thought that girls didn’t belong in the rock categories. Girls don’t play rock music,” said Alana Haim in an interview with Variety. One of the three sisters that make up the genrefluid pop rock band, Haim spoke of the ways in which women are routinely dissuaded from picking up an electric guitar or drum sticks to join a genre many see as hypermasculine.

The very music of Bridgers, Howard, Apple, Potter, the Haim sisters, and Lenker, then, is subversive in its rock-influence. Though none of the nominees necessarily play clear-cut “hard rock,” they each stand out as innovators in the genre. Their music bucks traditional rock tropes to lean on more dynamic influences — from the expansive, cerebral qualities of Apple’s restless piano track “Shameika” to the soaring musicality of Bridgers’s “sad girl rock” ballad “Kyoto.”

Still, the slate of nominations leaves much to be desired. Black women in rock are historically under-celebrated, despite their key role in the very creation of the genre. While the much-deserved recognition of Howard and the track “Stay High” from her “black-queer-Southern-feminist” solo album is a massive step forward for the awards show — which has been heavily criticized under the #GrammysSoWhite movement — the Academy’s outward commitment to inclusion must be sustained. Even this year, after the Academy removed the racially-coded term “urban” from its awards categories in an outward show of inclusion, the Album of the Year Category featured fewer Black nominees than in years past — snubbing artists like The Weeknd, whose critically acclaimed and massively successful song “Blinding Lights” and album “After Hours” received zero nominations.

“The Grammys remain corrupt,” he wrote on Twitter, evoking the awards’ long history of racial injustice. “You owe me, my fans and the industry transparency.”

The Grammys corrupt history is one that is in dire need of dismantling, especially when it comes to their treatment of Black women. This means nominating more Black women for the ceremony’s biggest awards while also increasing the diversity of the Recording Academy’s nomination review committee. While the committee has “historically not been comprised of diverse members,” according to an internal task force on diversity and inclusion, and therefore fails to accurately represent the industry, it also holds a massive amount of power in determining who wins each year. The demographics of the committee have improved in recent years — a move which no doubt influenced the greater inclusivity of this year’s Awards — but the work should not end when one Black woman is nominated to a category in a genre historically powered by Black women.

Also important to include is that, while touting the nomination of six women or female-fronted groups to the major categories of Best Rock Performance and Best Country Album as proof of the Grammys purported shift to (finally) include more women, the awards show also includes nominations for the pseudonym of Lukas “Dr. Luke” Gottwald, who allegedly abused pop superstar Kesha while she was signed to his label. In an interview with The Guardian, Apple called out the Grammys for their hypocrisy:

“The feeling of wanting to celebrate with these women was genuine.... I don’t know if anybody who’s nominated can help having the thought: What would I do If I won? My vision was that I would just get up there with a sledgehammer and I wouldn’t say anything, I would take the Grammy and smash it into enough pieces to share and I would invite all the ladies up,” she said. “My second thought was I wonder if I can get all these ladies to boycott this shit because of Dr Luke.”

As a whole, the better-late-than-never nomination of six incredibly deserving women clearly sets a groundbreaking precedent, but it is not enough for the Recording Academy to simply nominate women once and be done with it. The nominations of Bridgers, Howard, Apple, Potter, the Haim sisters, and Lenker — while historic — must also serve as a turning point for the Grammys, bringing with them more space for the recognition of countless female rockers to come.