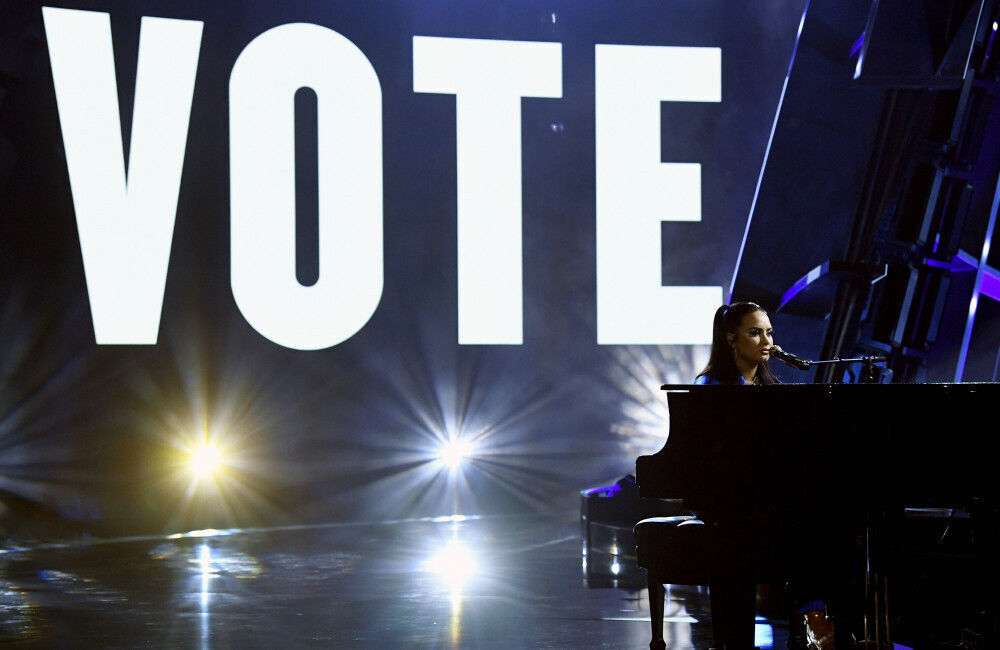 Demi Lovato has returned to the stage in 2020: After performing at the Grammy’s in January, she’s released a total of five singles so far this year. This time, she’s back with a crystal-clear message for President Trump in her newest release.

Lovato released “Commander in Chief” in October, just a few weeks ahead of the presidential election. The track is a politically-charged, aching ballad that takes a two-pronged approach to responding to the many crises the US currently faces — both an open letter to President Trump and a rallying cry for American voters.

Lovato has never been one to shy away from discussing difficult topics in her music. Most of her recent singles prior to “Commander in Chief” draw from her personal experiences and struggles. “Anyone” is an harrowingly candid admission of hardship and hopelessness; “I Love Me” and “Still Have Me” deal with self-image, self-love, and healing; “OK Not to Be OK,” as its title suggests, grapples with mental health and offers its listeners validation and reassurance. “Commander in Chief,” however, trades Lovato’s usual highly personal introspection for a perspective that emphasizes the power of the collective. As Lovato takes aim at the Trump administration’s attacks on human dignities and ambivalence towards inequality and suffering, she reassures the President that “our” fight is far from over. She sings, “Won’t give up, stand our ground / We’ll be in the streets while you’re bunkering down / Loud and proud, best believe / We’ll still take a knee while you’re / Commander in chief.”

The track’s slow, somber ambience is reminiscent of that of a breakup song. Lovato blends muted organ tones with a gentle piano for a melancholic yet unassuming sound. “Commander in Chief” may not be Lovato’s most complex piece, but it’s still powerful in its simplicity. The track’s vocals are similarly subdued: Opting for a softer, more pensive delivery, Lovato hesitates to use the full force of her vocals. She doesn’t sing with the same bravado that she does in “Still Have Me,” for example, but this choice is noteworthy in and of itself.

Although Lovato’s delicate, despondent tone sometimes feels at odds with the song’s ultimate message of resilience and resistance, her expressive vocals are pleading, effectively conveying the song’s emotional nuances. Lovato isn’t angry; she doesn’t belt. Above all else, she sounds tired: Like so many Americans, Lovato is weary of the Trump administration. In the second verse, she’s joined on the refrain by a chorus of voices that remain with her throughout the piece. Both soothing and soulful, the track’s melodic choral accompaniment again shows that there’s power in community.

Lovato and her background chorus sing directly to President Trump, addressing numerous current events in a series of clever, evocative lines. She told CNN in a recent interview, “There's been so many times that I've wanted to write the President a letter or sit down with him and ask him these questions… and then I thought… one way that I could do that is writing a song and releasing it for the whole world to hear and then he has to answer those questions to everyone and not just me.” Indeed, Lovato asks questions that weigh on the minds of so many: “Do you even know the truth? / We're in a state of crisis, people are dyin'/ While you line your pockets deep.” She also draws reference to the 2020 California wildfires, further critiquing Trump’s inaction: “Shuttin’ down systems for personal gain / Fightin’ fires with flyers and prayin’ for rain.” But perhaps the track’s most resonant lyric is its chorus’ conclusion: “Commander in Chief, how does it feel to still / Be able to breathe?”

In this line, Lovato brings together the US’ two pandemics — COVID-19 and racism — and highlights Trump’s contemptible disregard for both. While the President is still “able to breathe,” so many have lost their lives to the coronavirus and to systemic oppression and police brutality: A slogan closely associated with the Black Lives Matter Movement, the phrase “I Can’t Breathe” was one of the last spoken by Eric Garner, George Floyd, and countless other Black individuals killed at the hands of police.

Both timely and vivid, “Commander and Chief” is a viable entry into the genre of protest music. Of course, Lovato’s epistolary approach to engaging musically with politics is nothing new; many elements of “Commander in Chief” remain strikingly similar to “Dear Mr. President,” P!nk’s 2006 pop-rock open letter to then-president George W. Bush, for example. Nevertheless, the track’s lyrics are both thoughtful and critical and its emphasis on civic engagement is more important than ever. As the song urged, Americans voted in historically high numbers in the 2020 election. In the election’s wake, it’s time for the second part of her challenge — for President Trump to answer for his actions.