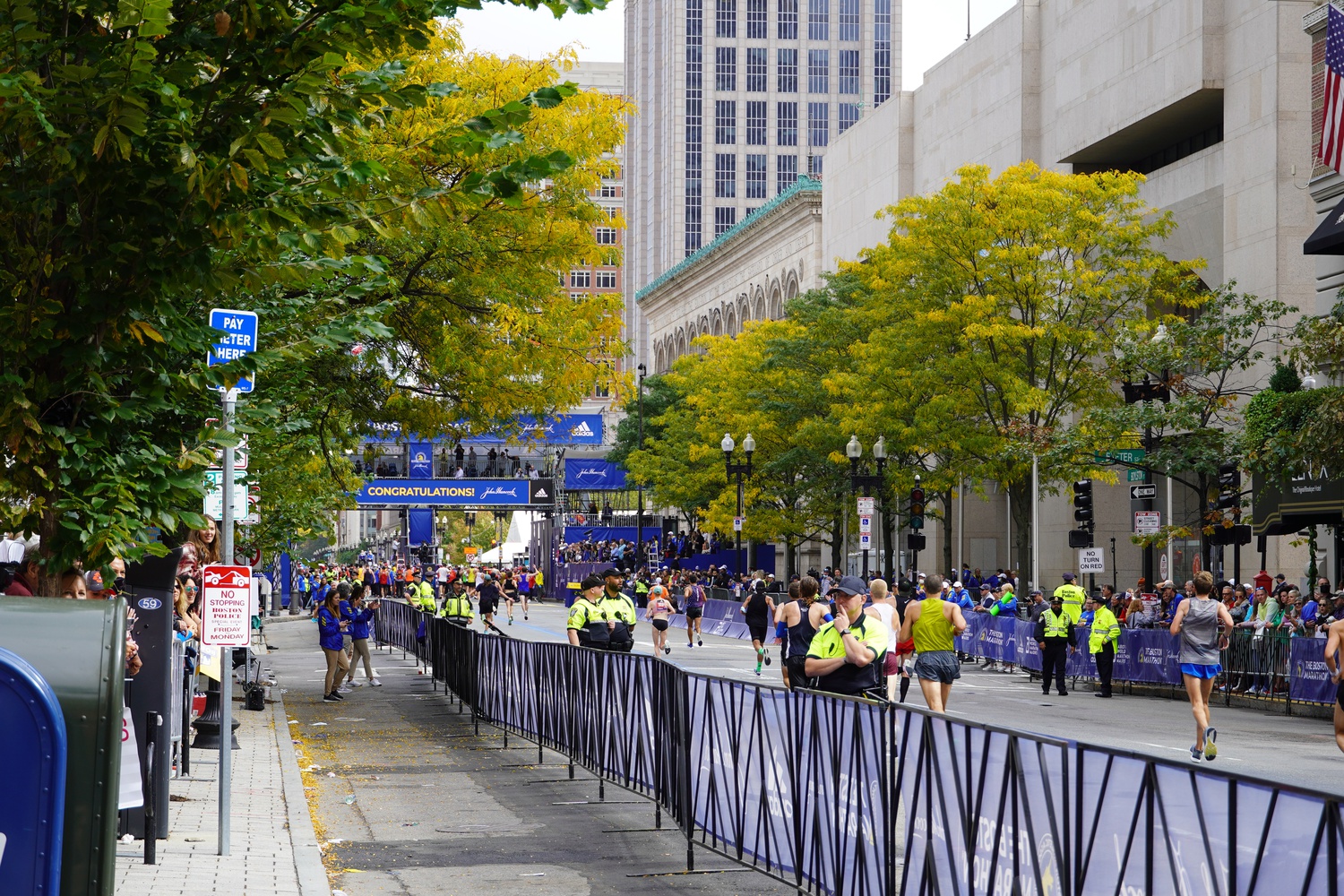 Harvard affiliates made a triumphant return to the streets of Boston Monday as they competed in the 125th running of the Boston Marathon. By Santiago A. Saldivar
By J. Sellers Hill and Rafid M. Quayum, Contributing Writers

Harvard affiliates made a triumphant return to the streets of Boston Monday as they competed in the 125th running of the Boston Marathon and the first to take place in person since the outbreak of the Covid-19 pandemic.

The world’s oldest annual marathon broke out into the streets of Boston Monday, as roughly 20,000 runners trotted from Hopkinton, Mass. to Boylston Street. Though Monday’s race marked a continuation of the storied Boston event, this year’s iteration varied in several ways: the race was postponed from last spring due to a high rate of Covid-19 cases, and runners were required to show proof of vaccination or a negative Covid test.

Mariam A. Sousou ’23 had intended to run the race in April 2020, but the coronavirus outbreak foiled her plans. She said competing in the Boston Marathon Monday — 17 months after she had planned to — symbolized a return to normal.

“It was something that was only a few weeks away when we left campus,” she said. “It was really disappointing to have to go home and miss out on the marathon. And so now I’m back here and I’m doing the marathon and everything is just coming back to the way it was supposed to be and it’s really exciting.”

For Kevin K. Kurgat ’22, the race was a cultural homecoming. Kurgat’s family belongs to the Kalenjin ethnic group of Kenya — the same group that birthed legendary marathoner Eliud Kipchoge.

“I haven’t spent a lot of time in Kenya, but it feels like almost a chance to take part in something that is a huge thing in my culture and my tribe,” he said.

Sousou and Kurgat were two of four runners who ran the race as part of the Harvard College Marathon Challenge — an organization run by Harvard affiliates that raises money to help Boston-area families and children through running. The other runners include Cabot House Resident Tutor Eric Mibuari and Kirkland House Faculty Dean David J. Deming. Since its inception in 2006, the Harvard group has raised more than $832,000, according to its website.

Winthrop House Tutor Irfan Mahmud ’16, who ran in Monday’s race, said he has felt a connection to Boston’s marathon since the event was the site of a terrorist attack in 2013. Two bombs detonated along the race path killed three spectators and injured 264 runners and fans. Mahmud said he was cheering on a friend at the finish line that year.

“It is something I will never forget, and I have been to nearly every Boston Marathon since,” he wrote in an emailed statement. “It was my dream to one day run the Boston Marathon itself, and now nearly a decade later, I was able to make that dream come true.”

Allegra B. Colman ’22, who used to compete for Harvard’s ski team, said the Boston Marathon provided her an opportunity to continue intense athletic competition while also raising money for a good cause. Colman said she raised money for Hale Education, a nonprofit that provides educational opportunities through the outdoors to students in Massachusetts.

“I can give back to the Boston outdoor community, do what I want to do, and have this really cool personal goal,” she said.

“It’s wonderful to be back together and having people make that storied journey from Hopkinton to Copley Square,” he said. “It’s a sign of resilience and renaissance.”