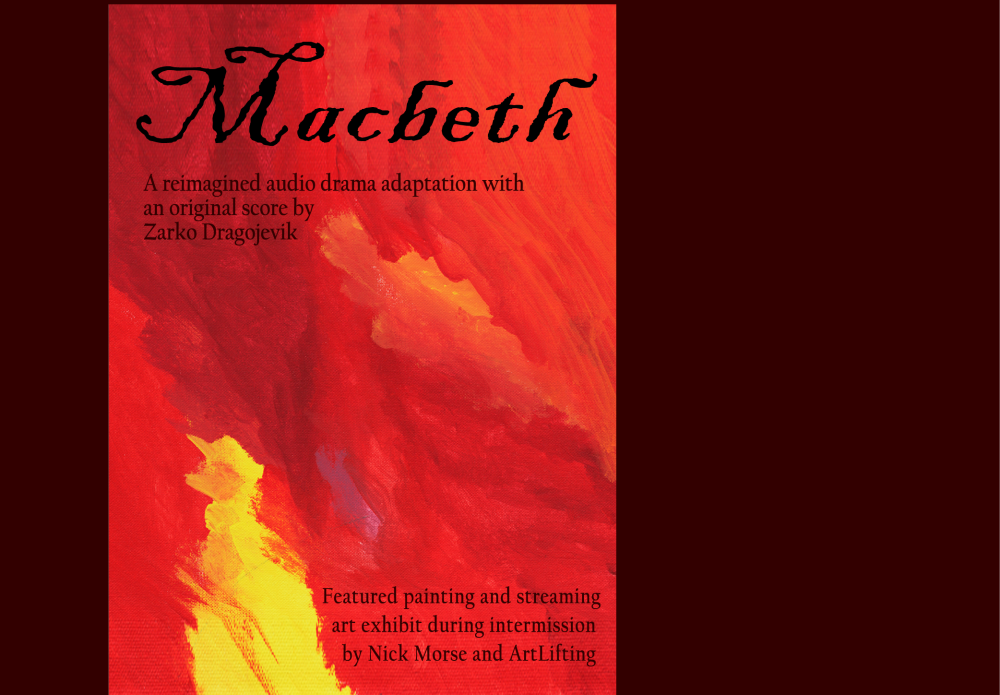 The Psych Drama Company’s audio drama adaptation of Shakespeare’s “Macbeth” captivates its audience in — to use the show’s words — “one fell swoop.” In this reimagined version of the tragedy, featuring Harvard alum Lindsay T. McAuliffe ’20 as a witch, director Wendy Lippe immerses listeners in the world of these well-known characters through an aural experience. As an easily accessible yet enchanting experience, this chilling 90-minute adaptation epitomizes the appeal of audio dramas in that it is an easily accessible and low-pressure enchanting experience available to stream online from Sept. 10 until Oct. 22.

“Macbeth” is at heart a story of ambition and paranoia, feelings conveyed immediately by composer Zarko Dragojevic’s original music and soundscape. The background music is suspenseful and violin-heavy when tensions are mounting, and raucous and rich during war and death. As audiences follow the trials and tribulations of Mark Prokes’s Macbeth, a Scottish general who will do anything to be king, the music guides our interpretation of his aspiration and guilt.

Even beyond music, sound is not just the medium through which listeners hear the story but also a key factor in their emotional experience. Macbeth’s paranoia ​​in Act III, for example, translates to irregular sounds that unnerve listeners, as if warning of imminent danger. The aural experience also allows for a riveting dramatization of the witches in the play, two of which are voiced by McAuliffe. The wide range in their voices — one speaks in a higher register, and another in a baby-like voice — magnifies the group’s chaotic nature. Complemented by the echoes often used on their voices and the lively soundscape of the show, these witches, who have been reimagined countless times in the play’s long history, terrify anew in the psych drama production.

The true magic of the show, though, lies in how these sounds spark audiences’ imaginations. When the witches speak to Macbeth in Act I, for example, an echo effect is paired with their overlapped voices, giving listeners the impression of being surrounded by them. Their whispers are persistent, imitating Macbeth’s inner turmoil. This curated acoustic environment gives the audience the context they need to imagine the scenes in whatever way suits them. Still, the plot alone is drama-filled and entertaining, with each character’s distinct voice playing into its progression.

The medium was certainly used well by the cast, who convincingly portrayed their roles without the help of physicality. Wendy Lippe’s Lady Macbeth has a honeyed and demanding voice that conjures a character who cannot be trusted to resist the temptation of power, and who will resort to violence to get it. Brian Dion’s Macduff has a gruff voice that implies his superiority to the doomed Macbeth, portraying him as being both more powerful and virtuous than Mark Prokes’s villain.

Listeners may expect the lack of visuals in “Macbeth” to be a hindrance, but it amplifies the effects of the sound in a way that seeing characters on stage (separate from the audience) cannot. Instead, the drama’s intermission, a virtual art gallery of pieces by Nick Morse, provides a visual experience. Morse’s colorful and emotive art encourages deliberation on the themes about human fallibility conveyed in the show. “Macbeth” puts audience members in the characters’ heads, allowing them to empathize while giving them agency over how to picture the narrative. This aligns with the psychological frame of the Psych Drama Company, which aims to use theatre to explore the human psyche and encourage reflection. This auditory production serves as a reminder that all listeners need to experience a stirring production is a pair of headphones and an imagination.