Officials in June 2020 had estimated that Harvard would face a revenue shortfall of $750 million for fiscal year 2021, but those concerns did not materialize. By Ryan N. Gajarawala
By Virginia L. Ma and Kevin A. Simauchi, Crimson Staff Writers

Harvard finished the fiscal year ending in June 2021 with a budget surplus of $283 million, despite a $124 million drop in revenue, according to the University’s annual financial report released Thursday. The figure marks a significant reversal from the University’s $10 million deficit at the end of fiscal year 2020.

Officials in June 2020 had estimated that Harvard would face a revenue shortfall of $750 million for fiscal year 2021.

The University cut 8 percent from its operating expenses in fiscal year 2021, primarily due to a decline in large, one-time costs incurred during the onset of the coronavirus pandemic in fiscal year 2020. Harvard saved on expenses due to the reduced on-campus presence of students, as well as savings in travel and other campus-related expenses. 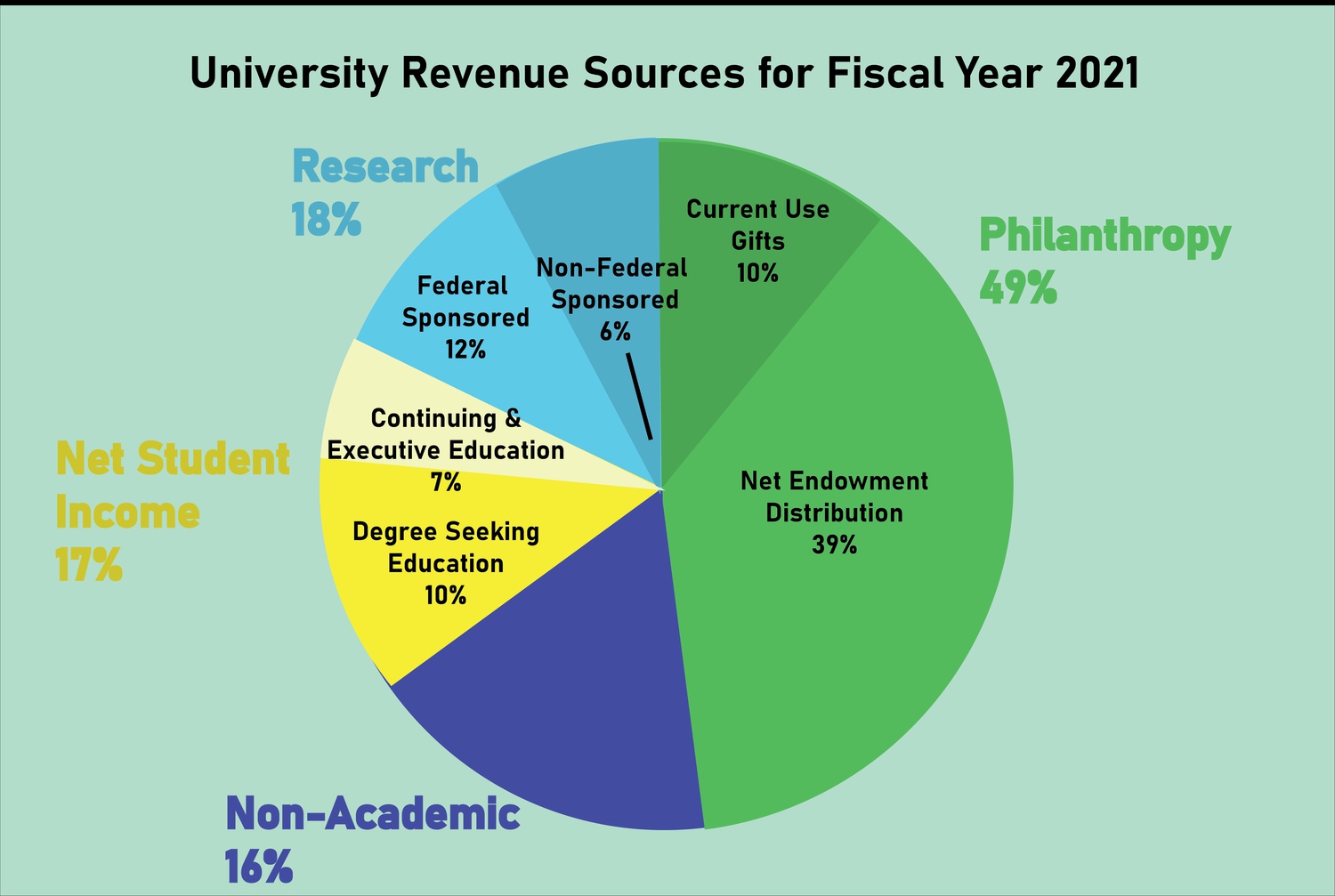 Despite these savings, the reduction of students living on-campus caused room and board revenue to fall by 58 percent, and total net student income to decrease by 17 percent, to $888 million.

In the two-year period from fiscal year 2019 to fiscal year 2021, both revenues and expenses declined by five percent, according to the report. It marked the first time Harvard saw ​​two consecutive years of declining revenues since the Great Depression of the 1930s.

“Facing declining revenues this past fiscal year, we took steps to control spending while developing and adopting new policies, providing frequent testing and robust contact tracing, and reimagining our shared practices and physical spaces to protect our students, faculty, and staff—an investment totaling more than $83 million,” Bacow wrote. “We also continued to pay our idled employees and contract workers at a cost of nearly $60 million.”

These investments helped the University avoid widespread layoffs, according to Bacow, who wrote that “almost all” of these employees had returned to work.

Bacow wrote that the University received an influx of current-use gifts from donors over the past fiscal year, a marked improvement from the 13 percent decline in gift pledges in fiscal year 2020.

“An increase in gifts for current use gave us the opportunity to direct funding to areas with the greatest need, and in ways that have made a real impact as we worked to address and abate the pandemic,” Bacow wrote.

Harvard Management Company CEO N.P. “Narv” Narvekar announced in a note in the financial report Thursday that the endowment posted 33.6 percent returns on its investments in 2021. The fund now totals $53.2 billion, the largest sum in its history.

Harvard’s endowment distribution increased by 2 percent in light of these immediate-use donations to total 5.2 percent of its market value. The endowment typically pays out roughly 5 percent of its value each year.

Despite the endowment’s success, University Treasurer Paul J. Finnegan ’75 and Chief Financial Officer Thomas J. Hollister wrote in the report that the University is limited by structured giving and market uncertainty in how much it spends from the endowment.

“The endowment is sometimes misunderstood as a checkbook for free spending, however that is not how it works, nor how it was intended by the donors whose gifts created the endowment,” Finnegan and Hollister wrote. “We are gratified that this year’s return results will provide a lift to operations in the next few years but remain aware that history teaches that capital markets give and take away.”