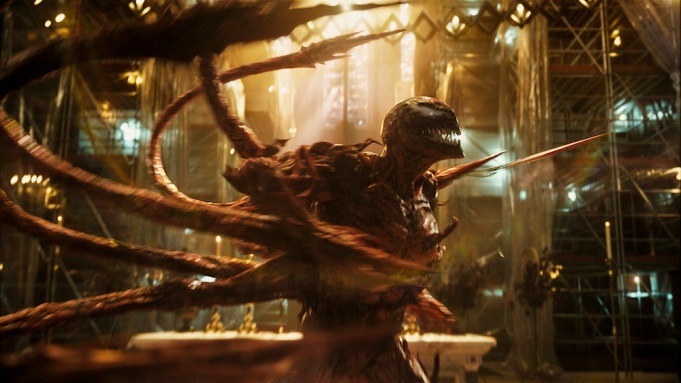 "Venom: Let There Be Carnage," directed by Andy Serkis. By Courtesy of Sony Pictures
By Kiara H. Gomez, Contributing Writer

If you are a dudebro who still thinks Thanos was a good villain, your favorite part of “Venom: Let There Be Carnage” will be the mid-credits scene. Any other member of the population that watches this movie on its own terms may find an endearing, wildly fun, and sometimes poetic ode to the beauty of dissonance. And, yes, a love story.

In this sequel to “Venom,” we find reporter Eddie Brock (Tom Hardy) and his alien symbiote Venom, also voiced by Hardy, struggling to live together. This conflict is exacerbated once Cletus Kasady (Woody Harrelson), a serial killer, demands that Eddie publish his life story. Long story short, Cletus gets close enough to bite Eddie and ingest his blood, transforming into the red symbiote Carnage. It’s a chaotic downturn that sends the protagonist pair into a tailspin argument, much to the audience’s amusement.

The love story is hard to miss and harder to deny, though it is by no means functional. Venom wants to be out in the world biting off bad guys’ heads. Eddie, meanwhile, pleads for Venom to understand: “This is not about wanting to be the hero for me, man. This is about wanting to live in peace,” he says. The holes in Eddie’s already disheveled apartment ceiling tell us this argument has happened before. It’s messy, personal, and dramatic — it’s love.

Like any cinematic love story, the pair must break up to discover they want to be together. After the television has been broken and a chicken’s life is threatened, Venom gives Carrie Underwood a run for her money by ripping Eddie’s treasured motorcycle into pieces and attending an “LGBTQIA kind of festival” where he proudly proclaims, “I am out of the Eddie closet!” Though admittedly humorous, breaking Eddie’s motorcycle is yet another symbol of how deeply the two care for each other. Given Eddie’s borderline suicidal driving the last time he was heartbroken, Venom doesn’t want to see Eddie hurt driving recklessly if he’s not around to heal him — which is somewhat ironic given how many times Venom has broken Eddie’s nose.

And if all this isn’t enough, Tom Hardy, who shared a writing credit on the movie, confirmed: “Yeah, it is 100% a love story.” A human as messy as Eddie and an alien as chaotic as Venom sharing a body shouldn’t work. In these moments of tenderness, however, Kelly Marcel’s writing and Hardy’s acting make it impossible to deny that they belong together.

The action scenes only serve to strengthen this thread of dysfunctional love. Woody Harrelson and Naomie Harris, who plays Frances Barrison, for example, deliver a believable and entertaining couple that just happen to be in love with vengeance too. Against a deliciously violent backdrop of alien tentacles and wailing police sirens, Cletus and Frances make out and express their genuine love several times throughout their prison break scene. The movie leans into this discordance in what makes for a fun final battle in the church where Cletus and Frances are sharing their vows before they plan to kill their enemies: Eddie, Venom, and Patrick Mulligan (Stephen Graham), the cop who took out Frances’ eye. The symbiotes trade blows that align with the heavy rings of a bell, transforming them between alien and human each time. Eddie to Venom. Carnage to Cletus. In addition to its visual appeal, this schism makes the final symbiosis, when Eddie and Venom recognize they are compatible where Carnage and Cletus are not, all the more poignant.

One of the film’s few missed notes comes from its treatment of Frances. After her sonic scream accidentally hurts Carnage, it is revealed she can never use her powers to protect Cletus. Given the symbiotes’ vulnerability to sound and fire and Carnage’s superior strength, Frances’ sonic scream gave her the potential to be the secret weapon Eddie and Venom needed to win the final battle. Alternatively, her powers could have presented an interesting narrative for her if Cletus was unable to stop Carnage from hurting her and she defended herself, demonstrating a refusal to be silenced even for love. Thus, when she is snuffed out mid-scream by the falling church bell, her ending falls short of poetic justice. Hopefully, she is just momentarily trapped under the enormous bell, and will return as an even more chaotic villain in future movies.

In not shying away from the weirdness of a comic book adaptation, “Venom: Let There Be Carnage” manages to tell an engaging story about living and loving dysfunctionally.