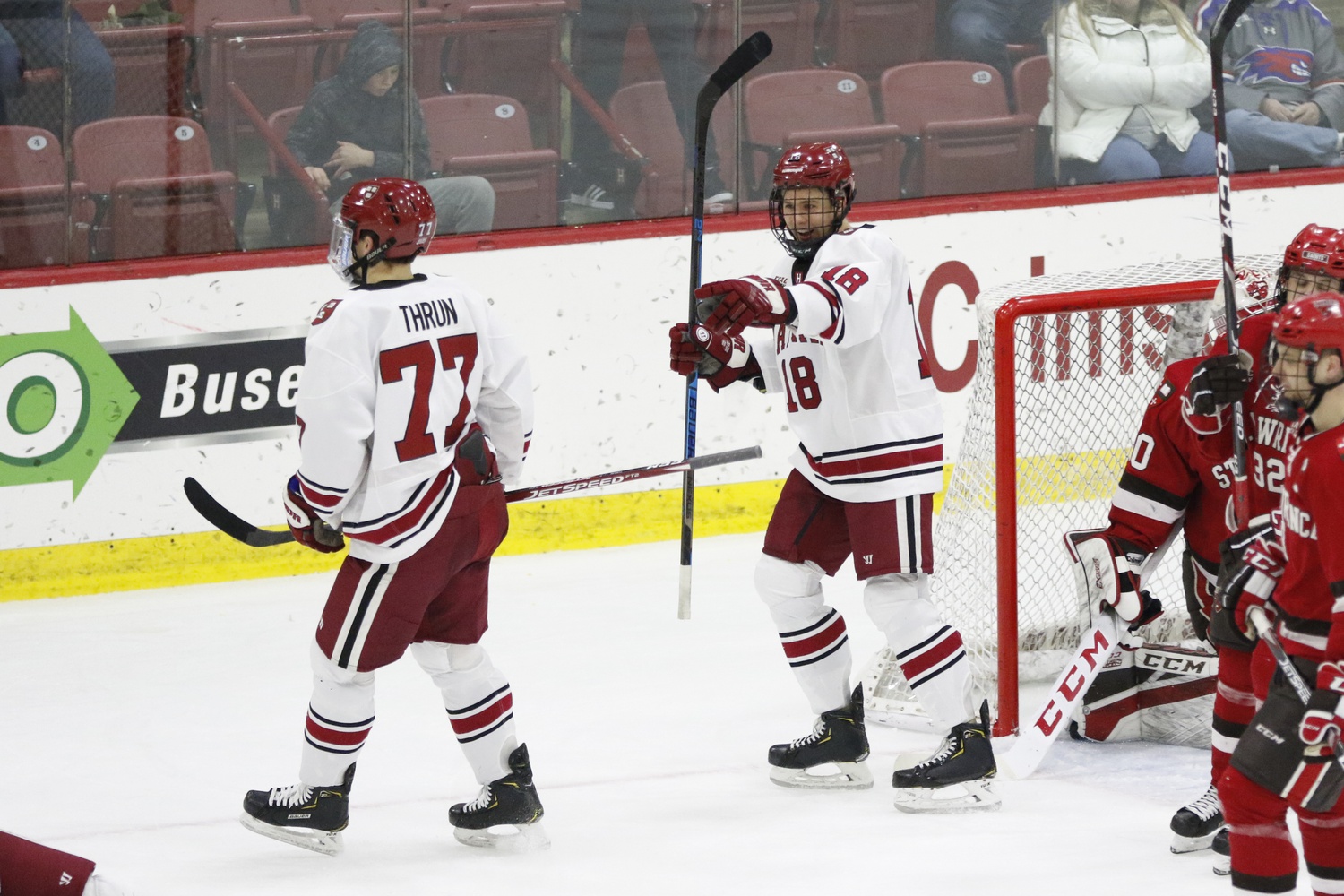 After more than 18 months off the ice, the Harvard University men’s hockey team will return as one of the teams to beat in ECAC Hockey this winter.

The Crimson, which played its last regular-season game on Feb. 29, 2020, and last game altogether on March 7, 2020, in the ECAC Tournament first round, was picked to finish third in the ECAC preseason coaches poll, receiving three first-place votes. Harvard finished behind Quinnipiac and Clarkson, both of which played in shortened seasons during the pandemic last winter while Harvard — along with the rest of the Ivy League, Rensselaer, and Union — was away from the ice. St. Lawrence and Colgate also skated with the Bobcats and Golden Knights to round out the four-team Covid-19 ECAC.

“I think there’s a certain energy and excitement around the team early on that’s been a real breath of fresh air,” said Harvard coach Ted Donato ’91 last week at the league’s media day conference call. “I think everybody’s really excited to kick the season off.”

The top vote-getter’s head coach, Rand Pecknold, who is entering his 28th season with the Bobcats, looked towards Harvard with his vote, granting the Crimson one of its three first-place selections.

“Harvard is absolutely loaded,” Pecknold said. “I voted for them one. I think they might be one of the most talented teams in the country.”

Along with the coaches, the media members who cover the ECAC also conducted another preseason poll, which placed the Crimson tied for second with Quinnipiac, with both schools receiving three first-place votes. Clarkson claimed the top spot in the media list. While the media and coaches polls featured the same top four (Cornell claimed the fourth spot in both), the discrepancies do not come as a surprise, especially this year given the uncertainty created by a partial 2020-21 ECAC campaign.

With two-thirds of the league off the ice last year, some coaches said making poll selections ahead of this season presented a challenge beyond the usual guessing game that the preseason predictions present.

“It was hard to pick the teams because these teams haven’t played,” Pecknold said. “You’re kind of guessing a little bit. I know Harvard, with all that talent; I know Clarkson is going to be great. Those were easy. Cornell is always good. They’re so well-coached and they’ve got that culture and they do a good job. But it was difficult picking who else was going to fit where.”

“Quite possibly, more than any other year, the poll is a little bit of blindly throwing darts at a board,” Donato said.

The projections did not end with team standings, however, as the league also named a preseason All-ECAC squad. Harvard forward Nick Abruzzese and defenseman Henry Thrun, both juniors, were named to this preseason all-league team last week. Abruzzese is coming off of a head-turning freshman campaign during which he notched 14 goals and 30 assists in 31 games, making him the top-scoring first-year in the country and earning him ECAC and Ivy League Rookie of the Year honors. Thrun is also coming off of a strong freshman year, during which he notched three goals and 18 assists from the blue line. One-third of the entire all-conference preseason lineup came from the Crimson as only six players total were named. Quinnipiac also had two skaters selected, and Clarkson and St. Lawrence each contributed a player to round out the list.

Without a season last winter, the Crimson will be integrating two classes that have never played Harvard hockey before, including a group of freshmen that has turned heads as one of the region’s top recruiting classes. First-year forward Matthew Coronato will highlight Harvard’s class of 2025 after a summer that saw him selected 13th overall in the 2021 NHL Entry Draft. The Calgary Flames selection is the highest NHL pick ever in Harvard men’s hockey history and just the third first-rounder the program has seen.

“The guys don’t look at it as a challenge, they’re looking at it as an opportunity just to get back on the ice, to have some sort of normalcy,” said Donato of bringing the large group of new players together. “I think that there’s real excitement and energy. I think the guys have put in a lot of work over the time off, and we’re hoping to hit the ground running.”

In an interview with The Crimson in May, on the issue of integrating two new classes at the same time, Thrun pointed to the importance of leadership from returning players.

“Having almost two freshmen classes, or half your team being new to college hockey — I think that's really going to make it reliant upon the upperclassmen to take a leadership role,” Thrun said. “At the end of the day, it’s a 30-game season, and every game matters. ... The juniors and seniors are going to have to do a really good job this year of steering the ship in the right direction and making sure that everyone’s on the same page.”

Besides the polls, all-conference team announcement, and interviews with coaches, the media day also featured a brief review of league rules, highlighted by a note on overtime. In the summer of 2020, the NCAA changed overtime rules for men’s and women’s college hockey to feature a five-minute, three-on-three session to be followed by a shootout in tournament and conference games only. In an ECAC context, a team would earn three league points for a regulation win, two points for an overtime or shootout win, one point for an overtime or shootout loss, and zero points for a regulation loss. Previously, in the 2019-20 ECAC campaign, teams earned two points for a win, one point for a tie, and zero points for a loss. Given that the Crimson did not compete last season, this year will mark the first season for Harvard under the updated overtime rules.