The Crimson nabbed a key emotional win for its seniors, but it failed to clinch a top-four seed in the ECAC and thus will not have a bye next weekend 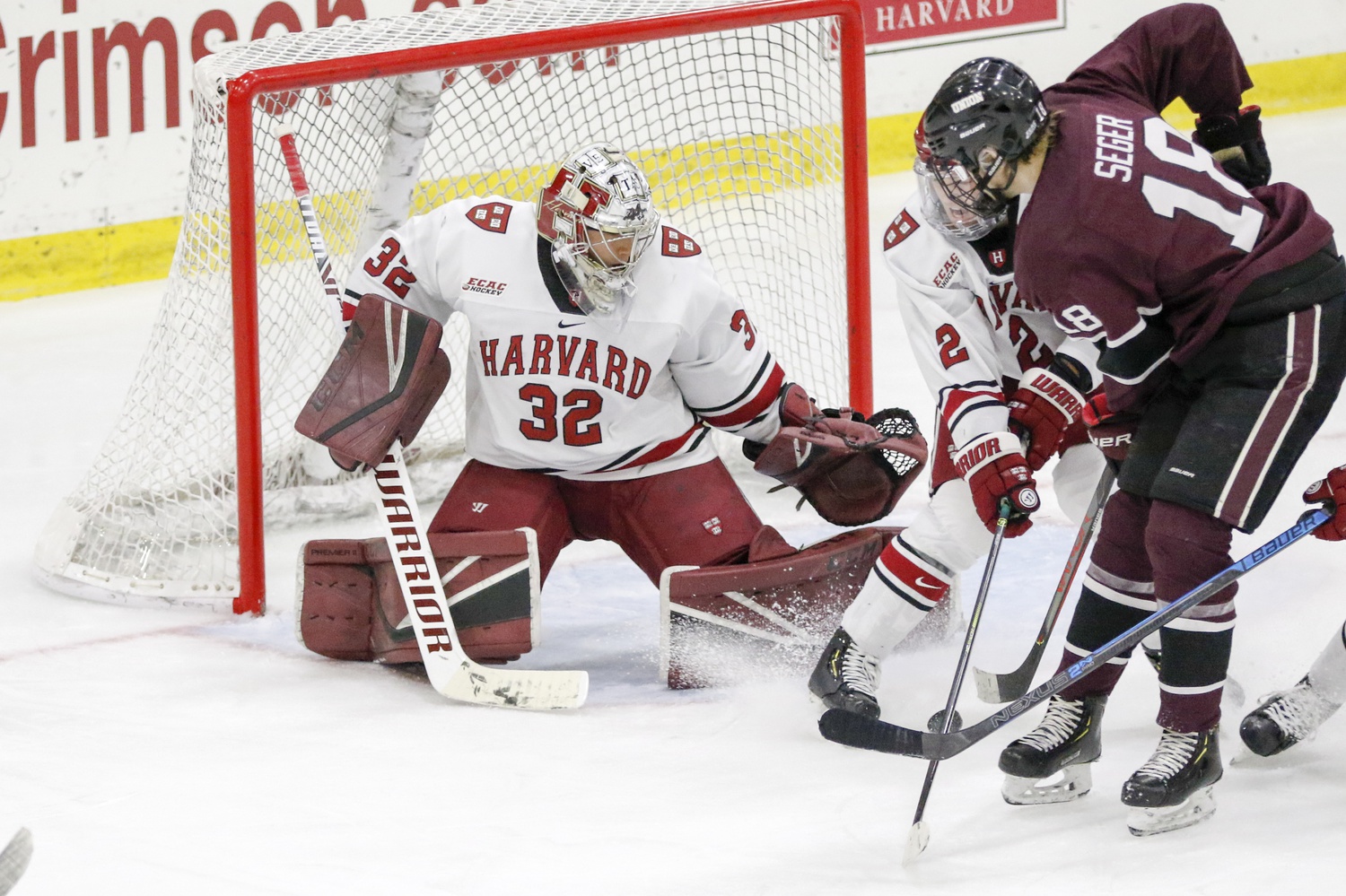 This isn't Cameron Gornet first Senior Night — the net-minder started last year's in the absence of Michael Lackey, and earned the win then as well. By Timothy R. O'Meara
By Spencer R. Morris, Crimson Staff Writer

In Saturday’s regular-season finale, the Harvard men’s hockey team accomplished one of two goals on its agenda. It defeated Union, 4-1, to allow its senior class to celebrate its final home game with a victory.

But the two points over the Dutchmen (7-23-4, 5-15-2) failed to clinch a top-four conference finish for the Crimson (13-10-2, 11-6-5 ECAC). Rensselaer, the other squad vying for the final first-round bye in the ECAC playoffs, shutout Harvard on Friday and earned another win at Dartmouth on Saturday to oust the Crimson’s chances at fourth place.

“It’s definitely some mixed emotions, but it’s good to go out with a win,” Harvard captain Nathan Krusko said. “We still have a lot of business to take care of.”

The Crimson, ranked fifth in the conference, will host St. Lawrence in a best-of-three series in the first round of the ECAC tournament next weekend. The triumph on Saturday marks the sixth straight senior-night win for the Crimson program.

“It’s great to get a win on senior night,” Harvard coach Ted Donato ’91 said. “I think the whole group wanted to send [the seniors] off on a positive note…. It’s always bittersweet with these end-of-the-year games. You’re so excited looking toward the playoffs, but that last home game for that group of seniors that has given so much to the program is also very special.”

Early in the second period, the Crimson nabbed its first lead of the game — one that would persist until the final buzzer. The centers tied each other up on an offensive-zone faceoff, and forward Austin Wong separated from his defender as he picked up the loose puck. The rookie briefly stick-handled before shelfing a shot from in close.

Wong’s strike was ultimately the decisive one in Saturday’s affair.

Nine minutes later, the Harvard powerplay cashed in for its second of the tilt. Freshman Nick Abruzzese regained possession of the puck in the offensive zone, preventing a Union clear. The winger found sophomore Casey Dornbach through a seam on the unsettled play, and Dornbach did not squander the open-net chance. 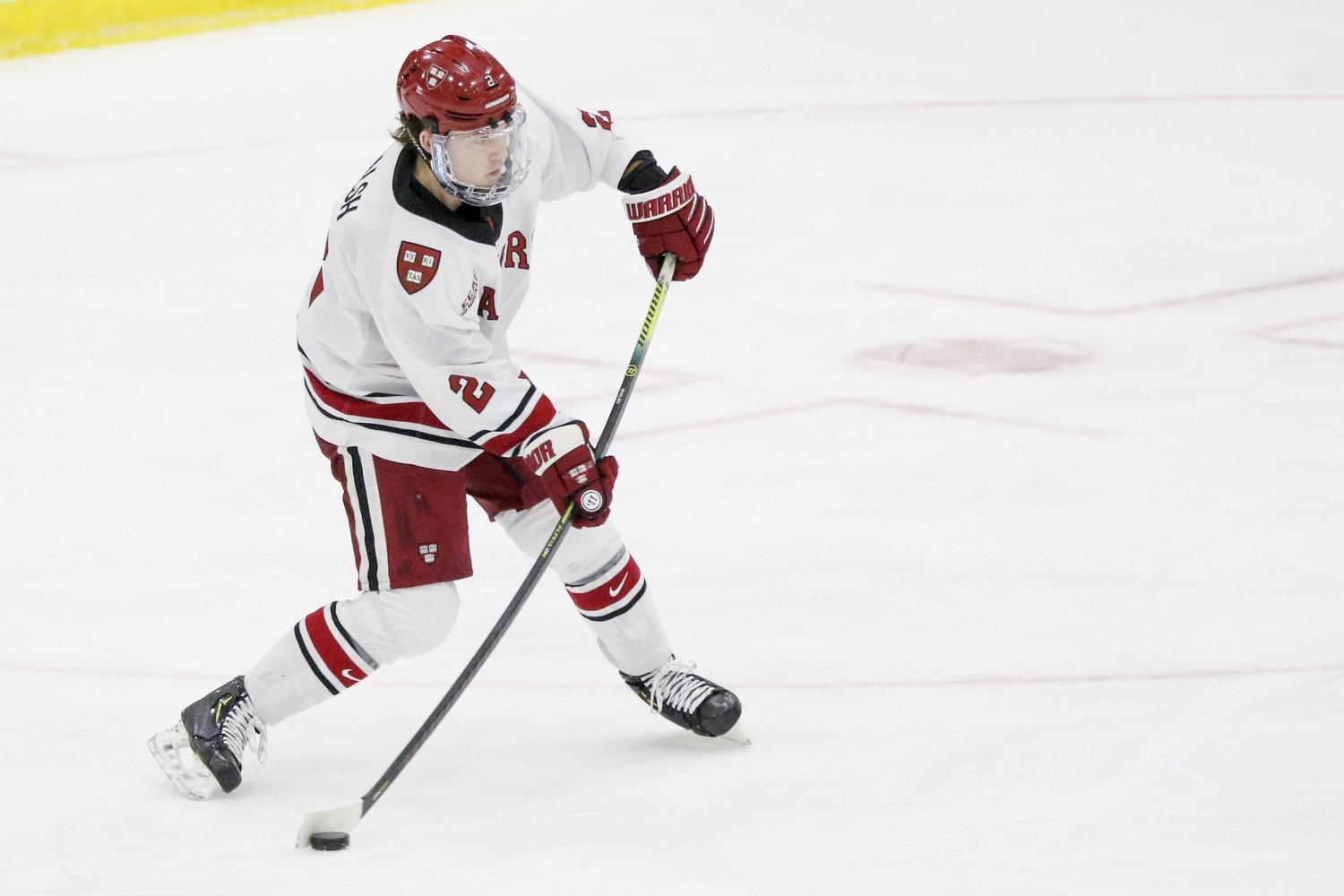 Reilly Walsh broke the ice for the Crimson tonight on the power play, netting his 20th career man-advantage tally. By Timothy R. O'Meara

The powerplay was just one side of Harvard’s impressive special teams performance. A chippy game resulted in numerous trips to the box. As such, the Crimson faced eight Dutchmen powerplays, but killed off all of them including a five-minute major.

“All year, special teams has been a hard emphasis for us,” senior forward Justin Szeto said. “The powerplay has been near the top the entire year, and they pulled through for us today in a big way. And same thing with the kill. A lot of penalties taken, and maybe some calls we didn’t agree with, but when push came to shove, our kill was there, which was huge.”

Both teams found twine in the opening 20 minutes, but the visitors drew first blood. After Union won a puck battle in the corner, freshman Gabriel Seger found classmate Dylan Anhorn unguarded across the slot. The defenseman buried the chance before Harvard net-minder Cameron Gornet (1 GA, .958 SV%) could travel from post to post.

Then came the most pivotal moment of the incipient frame. Drury suffered a nasty hit in the Dutchmen’s zone, and once play was whistled down, coach Donato voiced his displeasure to the officials regarding the dangerous play against his centerpiece forward.

Half a minute into the man advantage, junior defenseman Reilly Walsh lit the lamp on a one-timer from the point. Rathbone teed up Walsh’s clapper, which zipped over the right shoulder of junior goaltender Darion Hanson (4 GA, .867 SV%). 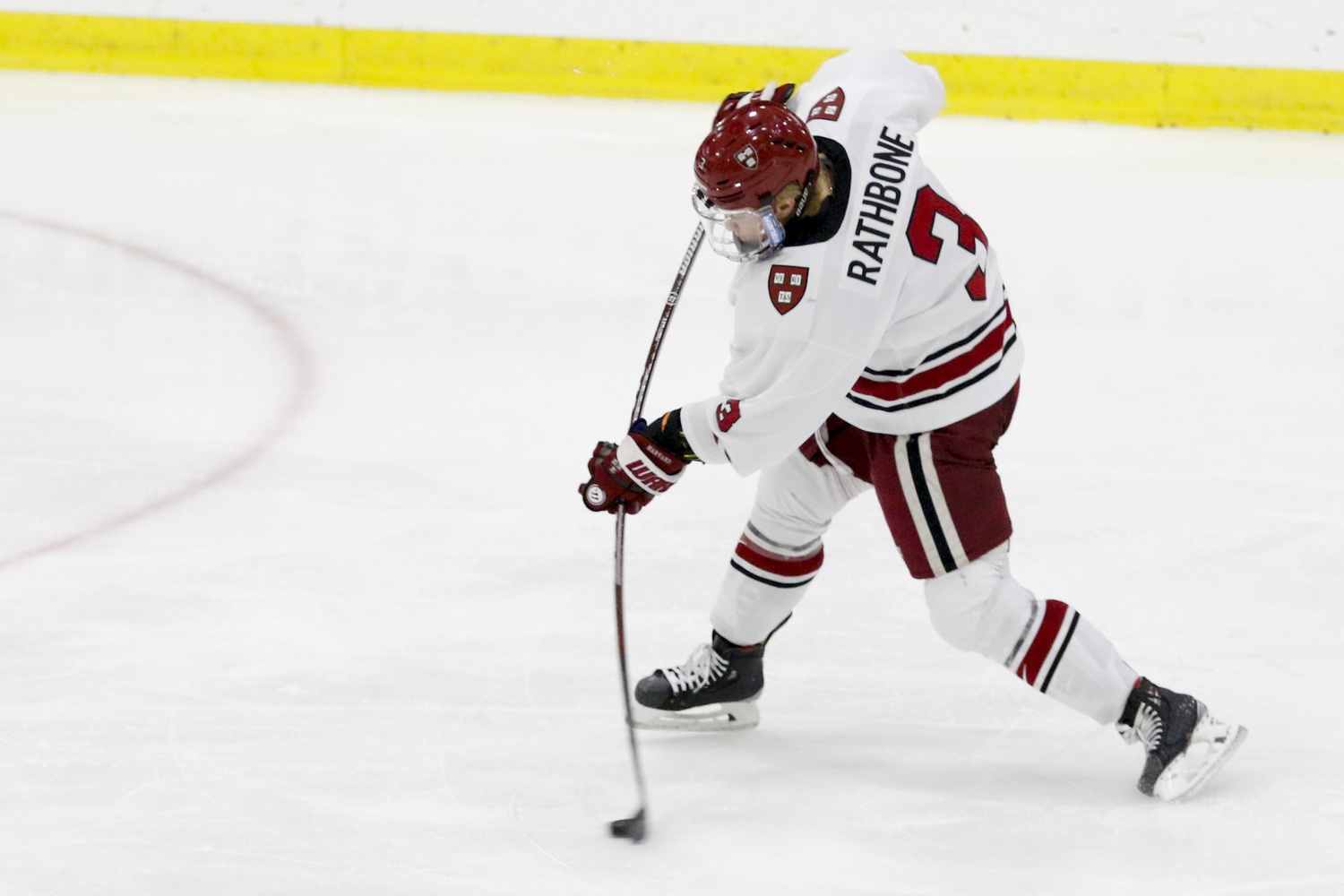 Harvard's power play went 3-for-5 tonight, jumpstarting the shift in momentum that carried the team to victory. By Timothy R. O'Meara

The major penalty was the turning point of the first stanza, as it allowed the hosts not only to even the ledger but to gain control of play by the period horn. Harvard finished the frame ahead, 12-9, in shots.

“I thought that the first half-dozen minutes looked eerily familiar to our last couple of games,” coach Donato said. “Once we got on the powerplay, it looked like it kind of jumpstarted the group…. At that point, we started to invest in the game a lot more, emotionally and physically.”

Campolieto’s ejection wasn’t the only one on Saturday. With just seconds left in the middle frame, rookie John Farinacci was deemed done for the night due to an elbowing infraction.

Even prior to the line shuffling necessitated by Farinacci’s misconduct, most Crimson forwards were skating on unfamiliar triplets. Following two disappointing results, Harvard jumbled its lines up front on Saturday.

Coach Donato split the lethal top line, opting instead for Wong on the first trio and Dornbach on the second line with Farinacci as his center. Juniors Henry Bowlby and Jack Badini were also disentangled from their usual second-line pairing.

“I felt like our seniors all needed to be in the lineup tonight,” coach Donato said. “I think there’s a brotherhood in the locker room that understands that. To me, we’ll take a deep breath and figure out what we think is best moving forward.”

With Saturday’s bout, the five members of the class of 2020 bid farewell to their final regular season. Now, their careers in the crimson and white will last as long as the team’s postseason hopes. 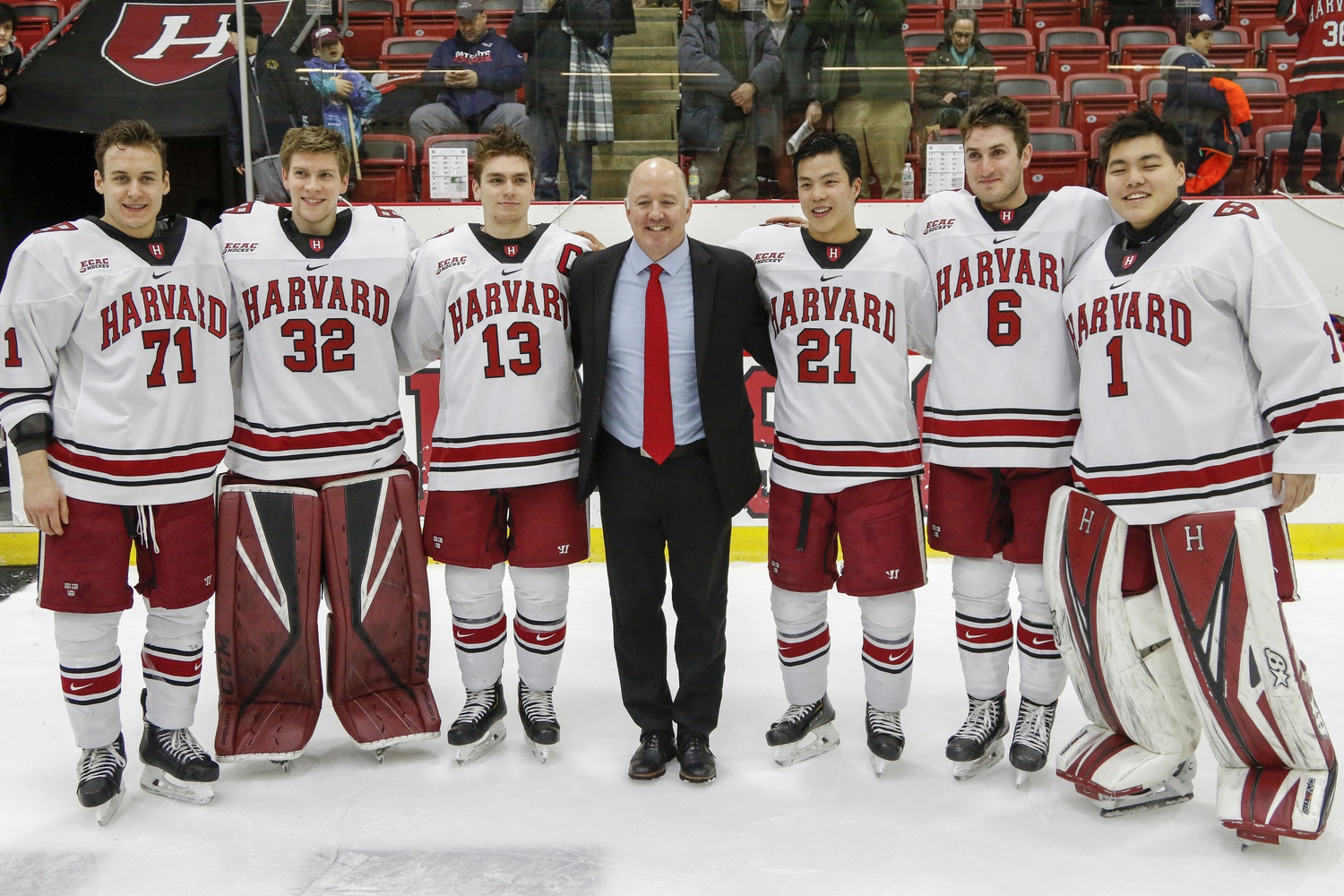 The senior class has won 75 games in its four years at Harvard, has been to the Frozen Four once, and has had three trips to Lake Placid. By Timothy R. O'Meara

Originally a cohort of eight, the group will graduate five strong after the early NHL departures of blue-liners Adam Fox and John Marino, as well as the transfer to Wisconsin of centerman Ty Pelton-Byce due to academic eligibility complications.

Of the remaining members, four are forwards. Krusko heads the bunch, having logged 53 career points (18–35—53) and earned Beanpot MVP honors as a first-year winger on the Frozen Four-bound 2016-2017 squad. Krusko leads this year’s iteration of the Crimson in games played, now with 129.

Colton Kerfoot has skated in 80 matchups over his career, amassing 22 points (6–16—22) in the process. Fellow British Columbia native Szeto (23 career GP, 0–1—1) has seen his role increase as an upperclassman and, by all accounts, has been an exemplar of the Harvard program on and off the ice.

Another Canadian, Frédéric Grégoire (84 career GP, 10–14—24), has been an important roster piece for multiple of coach Donato’s teams. As a junior, the versatile forward found chemistry on the bottom six and was voted the most improved player by his teammates after the 2018-2019 season.

Gornet has manned the pipes for the Crimson for parts of four seasons. In 27 career appearances, the St. Louis, Mo. product is 10-5-3 on the backs of a 2.56 goals against average and a .916 save percentage.

In total, these five Harvard icemen have been a part of 75 program victories. Of course, they are hoping to add several more to that tally before they officially hang up the skates.