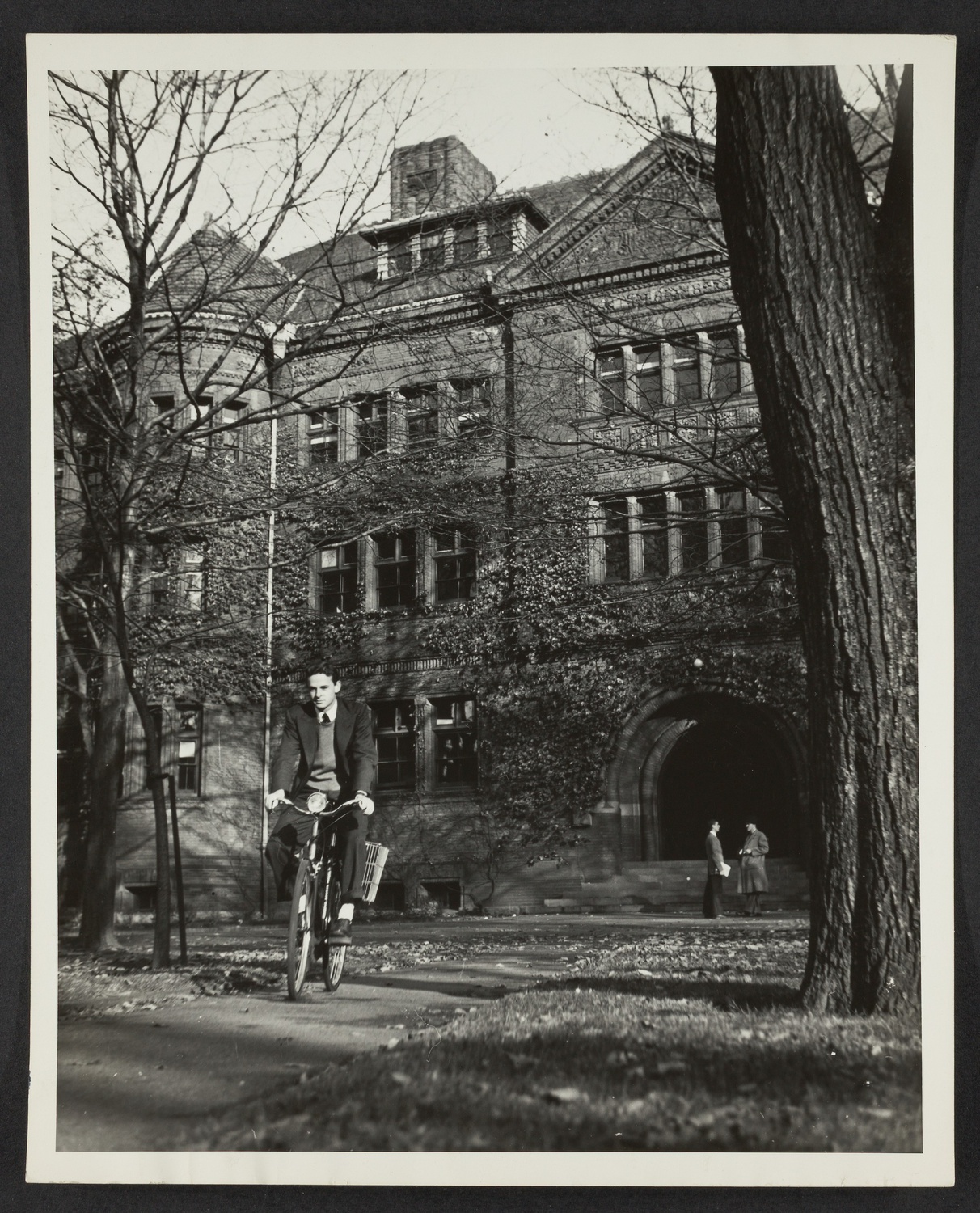 Who Wants to Buy a Bench?

When Harvard renovated Sever Hall in 1949, they replaced Sever's long benches with polished desks. That prompted the Alumni Association to sell the 150 benches, covered in drawings and scribbles, for $15 each. The reasons people bought these benches are eccentric and fascinating.
By Kendrick N. Foster

In October 1949, Harvard alumni had a unique chance to own a piece of Harvard’s history: a bench from Sever Hall.

Today’s undergraduates might scratch their heads at that announcement: What Sever benches? But before the renovation of Sever Hall in 1949, undergraduates sat at long workbenches, rather than modern desks, to listen to professors expound on foreign languages, classics, and math.

During that renovation, the University decided to replace the benches with “blond, polished desks in the Lamont tradition.” In turn, this prompted the Harvard Alumni Association to sell off 150 benches for $15 each — equivalent to almost $175 today. The funds would go towards transforming Wadsworth House into an alumni center.

“They are the ancient writing desks of thousands of Harvard men,” the HAA wrote in its announcement to alumni about the benches on Oct. 22, 1949. “Their tops are carved beyond belief with names, dates, scores of games, drawings, doodles, and plain destructive incisions.”

“Like the varsity football team, however, they don’t cave in so easily,” the Alumni Bulletin’s message concluded.

Responses from nostalgic alumni poured in. The day of the announcement, Brookline physician Harold Bowditch, Class of 1905, wrote to the HAA to request a specific bench with the 1901 Harvard-Yale game’s score inscribed. “I cut it in myself and do not blush to say so,” Bowditch confessed. That year, the Crimson had pummeled the Bulldogs 22–0 in front of a record-setting crowd of 36,000 at Soldiers Field.

Alice John Vandermeulen, an economics professor and Radcliffe alumna, reported that the images of the benches “made [her] feel very sentimental.” “I am taking a year’s leave of absence to write a book,” she continued. “What better place for inspiration than a desk from Harvard Yard?”

Other letter-writers sought to gift benches to Harvard-affiliated relatives. Ruth Nash Chalmers of Scarsdale, N.Y., wished to give the bench to her son-in-law, Collis M. Hardenbergh ’33, for Christmas. “If I’m not going to get it […] I’ll have to invest in something else, as one can’t neglect one’s sons-in-law at Christmas,” she wrote.

Nancy Nichols bought a bench to inspire her young son George Nichols III. Nichols — a mother with high expectations” — hoped that George would enter Harvard “despite his present poor grades in ‘Sandbox Play.’” (Nichols did eventually receive a Master of Arts in Religion from the Divinity School, although he did not attend Harvard as an undergraduate.)

Still others thought the benches could mark momentous occasions in their own lives. William B. Kehl ’40, then a mathematics instructor at MIT, wished to acquire a bench to celebrate his five year anniversary — their “wooden” anniversary — with his wife, which fell on Oct. 24. “Hope you get a lot of gifts, but not too many early ones,” he wrote.

But for most people, the scarring and graffiti only added to the nostalgic appeal. W. B. Gresham Jr. ’37, an entomologist, wrote on Oct. 30 that “the more notches, carvings, cuttings, and defacings, the more I will value this bench.” 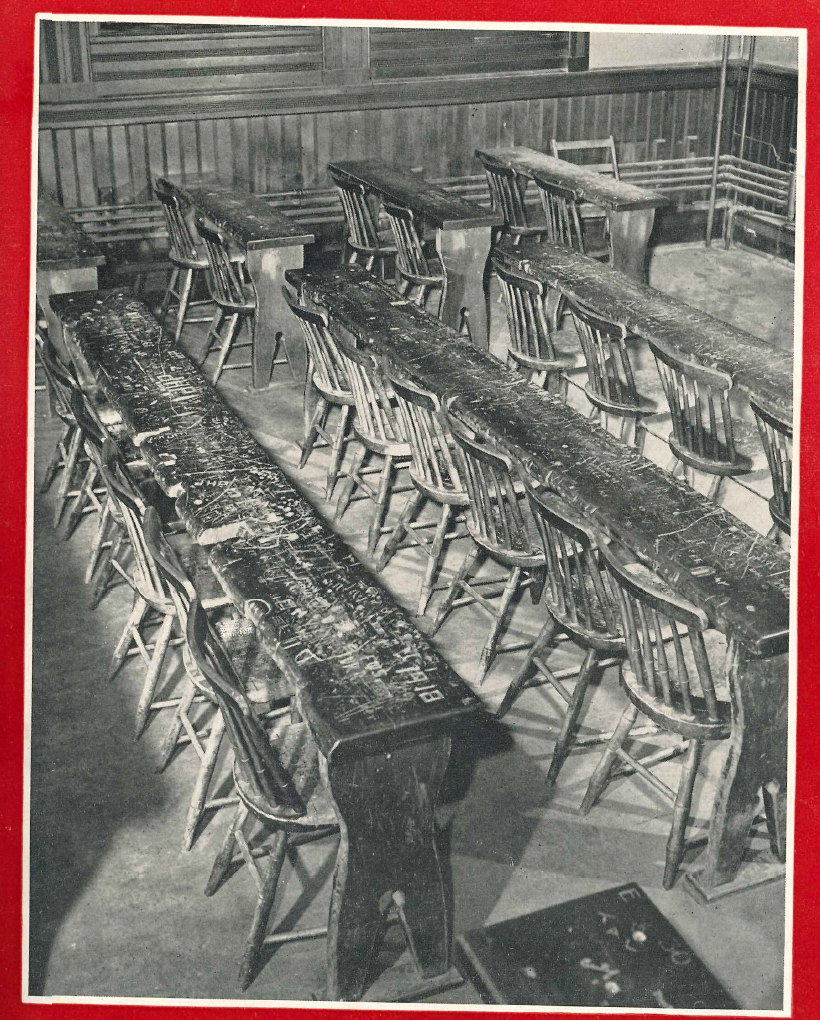 “We were very glad to receive the bench, but much to our dismay there is not a single scratch on it,” Horace Hart ’33 complained upon receiving his bench in December 1949. “Can these be from Sever?” The Alumni Association promptly sent a new bench to Hart, this one with substantially more scratches on it.

In its Dec. 3 issue, the Alumni Association announced that it sold all 150 benches, raising $2,364.50 in total. Beyond the original 150 on offer, the HAA also announced that it had discovered another 100 benches. That discovery allowedit to “open the lists again” to the many people who had expressed interest in purchasing a bench but had missed their first opportunity.

Requests for the benches started petering out around February 1950, when the Wadsworth House renovations had essentially concluded.

However, some interest lingered: Bertram J. Smith inquired plaintively to HAA secretary F. W. Willett on Feb. 21, 1952. Willett replied that no benches remained. “The little article in the Alumni Bulletin created much more interest than was anticipated and apparently we could have sold ten times the number, had they been available,” Willett wrote. Smith eventually received his bench more than a year later, when the HAA discovered several additional benches in August 1953.

More than 50 years after the original article put the benches up for sale, Sever has neither “ancient writing desks” nor “blond, polished desks.” Instead, it has humdrum chairs with attached desks and few scratches or markings, now the norm in university classrooms from Pittsburgh to Paris.

Even though they have less physical evidence of undergraduate presence, those chairs will probably produce nostalgia for us in 50 years from now — and if the HAAsells them off to raise money, they will likely cost more than $15.