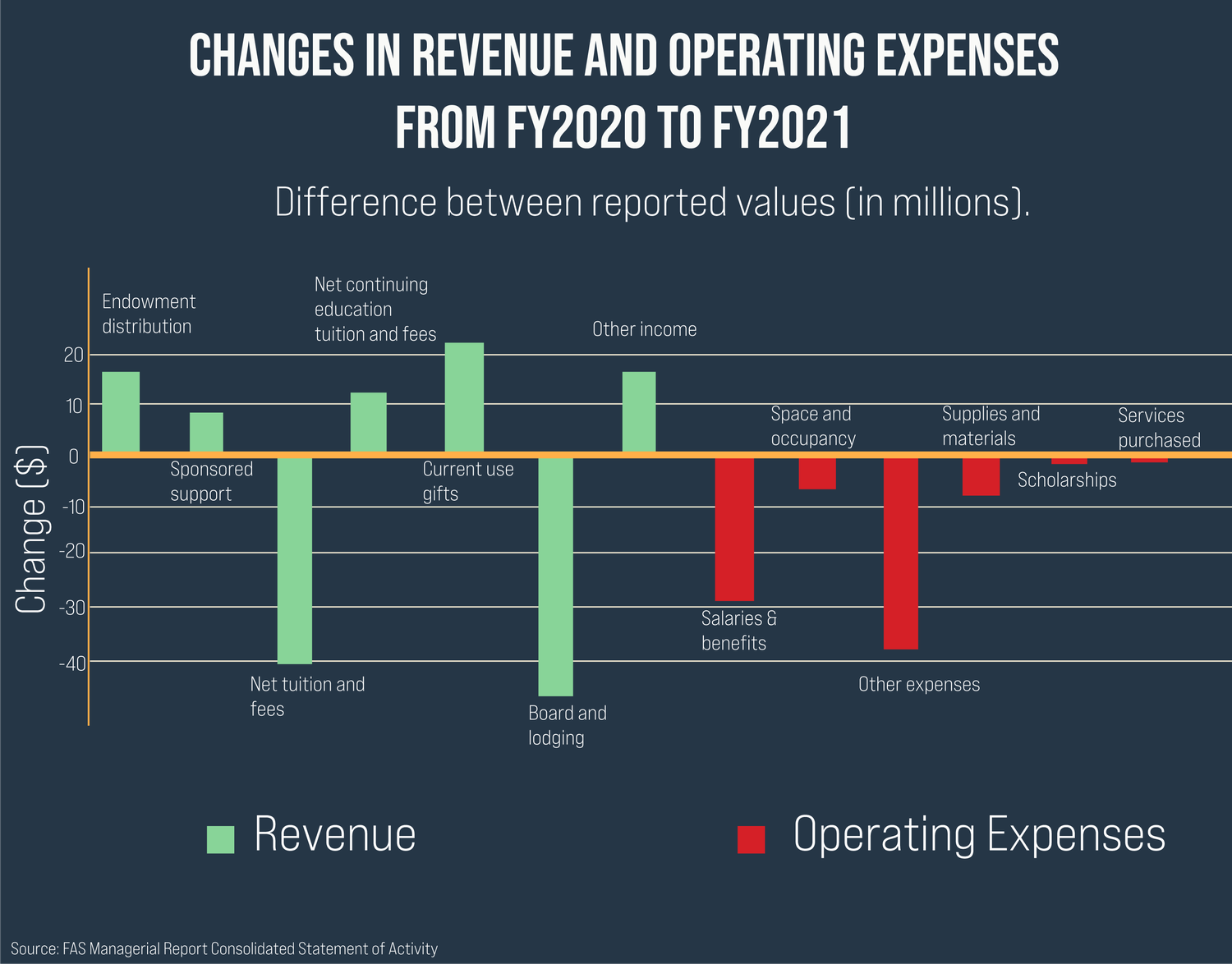 The Faculty of Arts and Sciences ended fiscal year 2021 with a $51 million surplus, according to the Dean’s annual report, which was presented during a monthly faculty meeting Tuesday.

That surplus represents a significant contrast from the school’s original projections, which expected a $112 million deficit for fiscal year 2021, as well as an improvement from the $16 million deficit the FAS ran in the previous fiscal year when including the School of Engineering and Applied Sciences.

FAS Dean Claudine Gay encouraged faculty at the meeting Tuesday to think proactively about the future of the FAS given its strengthened financial position.

“We’ve invested enormous energy in maintaining excellence with the resources we have, and I know there hasn’t necessarily been space to imagine,” she said. “I’m here to tell you there is this space right now, and this is an earnest invitation to imagine what long-term excellence looks like and what will be required to get there.”

Gay annouced Tuesday that the FAS plans to make “targeted investments” using some of the surplus revenue, including spending $5 million to purchase new technology, such as cameras and screens, to equip offices and classrooms for hybrid and remote work.

Gay also announced that she has authorized 18 new ladder faculty searches, bringing the total to 66 searches for the 2021-22 academic year, accelerating faculty hires across all the three divisions of the FAS. The FAS conducted 31 ladder faculty searches in the previous academic year, resulting in 11 offers. At the start of the pandemic, Harvard announced a University-wide hiring freeze to trim its budget.

At the meeting, University Provost Alan M. Garber ’76 also recognized the 16 newly tenured members of the faculty. Only two tenure reviews were unsuccessful this year, and the tenure success rate for both women and faculty of color was 100 percent, according to the annual report.

Following Gay’s remarks, Dean for Faculty Affairs and Planning Nina Zipser noted the FAS’s faculty ranks dropped slightly during the pandemic, but forecasted that the accelerated faculty searches this year will lead to an uptick in new hires within the next two years.

Thirty-four faculty members departed Harvard in the last academic year, according to the report. Of these faculty, 12 retired, 11 were hired at other institutions, seven were unsuccessful in their promotion reviews, and four died.

“We looked at the data and found that female assistant, associate, and tenured professors serve on more committees than male colleagues,” Zipser said. “This analysis does not include ‘invisible labor,’ which can be hours and hours of support — this leads to an unequal amount of time to do research and support one’s work.”

To act on the findings, Zipser said that she will assemble a faculty committee to “look at the distribution of service, teaching, and mentoring.”

Gay also told faculty at Tuesday’s meeting that the availability of Covid-19 booster shots and pediatric vaccine eligibility could mean “the spring looks and feels quite different.”

“Over the balance of the fall term, we are going to take steps to enable faculty to teach unmasked by next spring,” she said.

“Obviously, any significant changes to our core public health protocols will need to be decided by Health Services, but there are changes we can make at the FAS level to prepare with optimism for a different kind of spring,” she added.