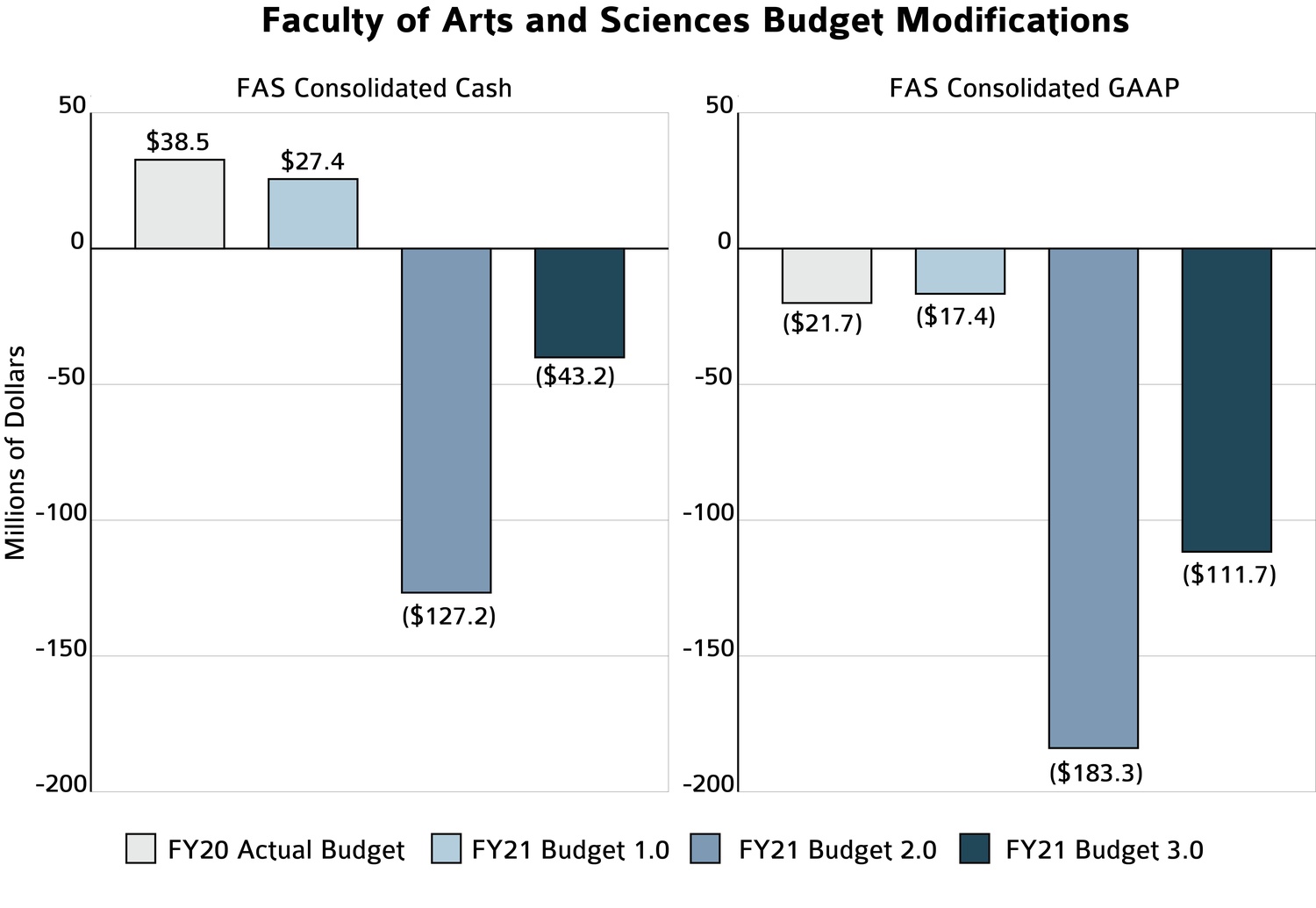 The Faculty of Arts and Sciences's finances have changed during the COVID-19 pandemic. By Camille G. Caldera
By James S. Bikales and Kevin R. Chen, Crimson Staff Writers

The Faculty of Arts and Sciences projects a $111.7 million deficit in fiscal year 2021, according to the Dean’s annual report, presented during a faculty meeting Tuesday.

Still, FAS ended the 2020 fiscal year in a stronger financial position than it had anticipated at the beginning of the coronavirus pandemic. The actual 2020 deficit of $22 million — representing less than 2 percent of FAS’s budget — marks a sharp decrease from the $41.7 million deficit FAS projected in March, when the University moved all instruction online due to the pandemic.

FAS Dean Claudine Gay wrote in April that FAS was unable to cover its fiscal year 2020 budget after incurring more than $30 million in unforeseen expenses and lost revenue due to the pandemic.

While FAS predicted a revenue loss of $79 million in March due to the coronavirus, as compared to its original budget, the actual revenue loss was only about half that, at $38 million.

On the other hand, expense savings of $21.2 million amounted to only around half of the $41.3 million FAS predicted it would be able to save in March.

While FAS originally predicted it would save $8.5 million in salary, wage, and benefits expenses, these costs instead increased by $0.4 million after the University decided to pay workers through the fiscal year rather than furloughing or laying off employees. The FAS also incurred $15 million in costs from its early retirement program.

The FAS’s 2020 deficit marks a downturn from the surpluses of $13.6 million and $3.1 million it reported in 2019 and 2018, respectively. Prior to 2018, the FAS reported several consecutive years of budget deficits, struggling to recover from the effects of the 2008 financial crisis.

FAS Dean for Administration and Finance Leslie A. Kirwan ’79 said during the faculty meeting that making up the deficit may require major “structural” changes to the FAS’s finances in the long run.

“We’re not going to be able to close that in one year,” she said. “We may have to get leaner to be more sustainable over the long term.”

Despite shaving off nearly half of the projected 2020 deficit, Kirwan said most of the pandemic’s financial impact will be visible in the 2021 budget. 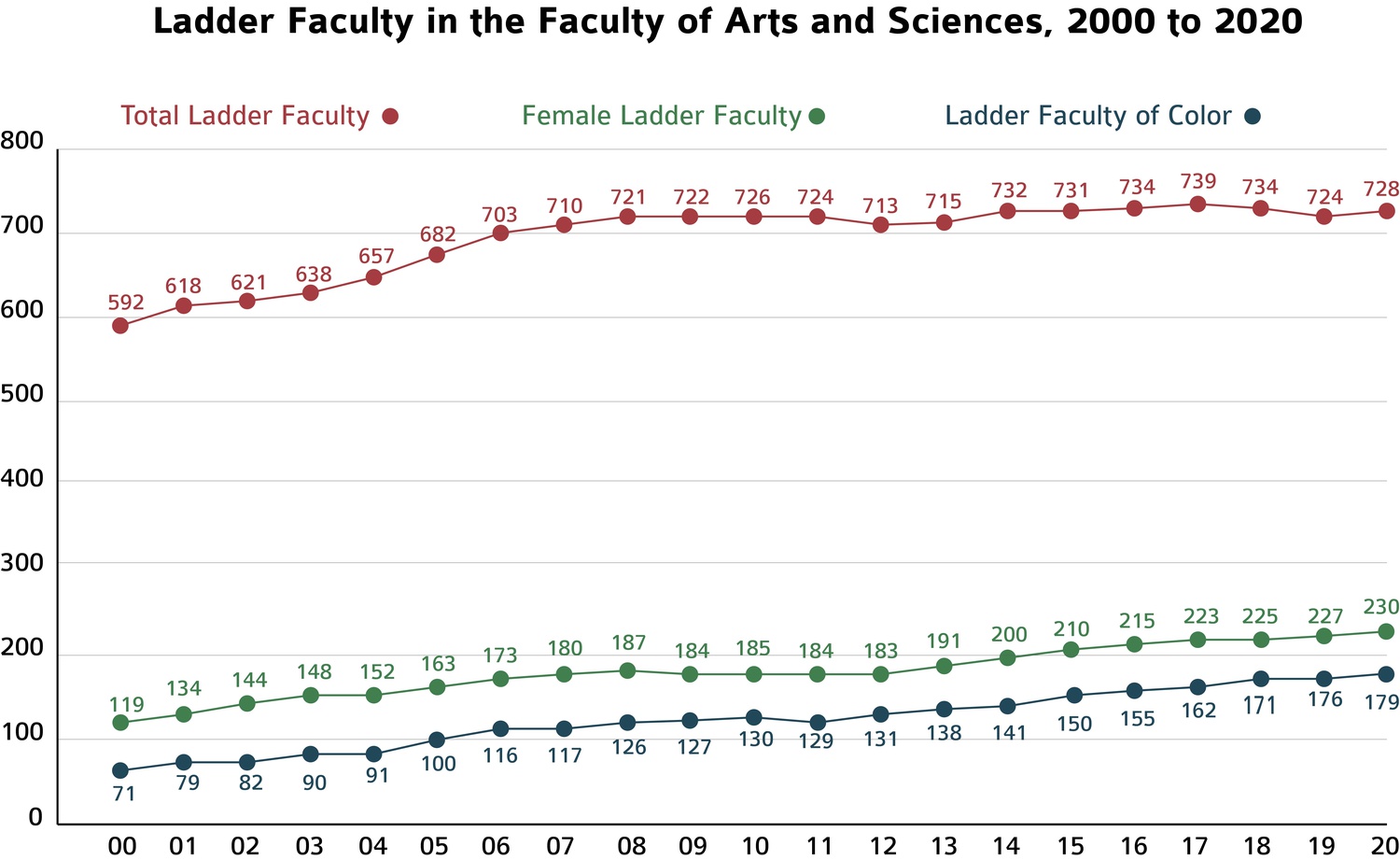 During the 2019-2020 academic year, FAS conducted 63 faculty searches and extended 38 offers. Forty-seven percent of the offers went to women, and 32 percent went to faculty of color, both slight improvements from the previous five year average, according to the report.

Just eight of 15, or 53 percent, of internal tenure reviews were successful in 2019-20 — a significant decrease from a success rate of 69 percent last year and the ten-year rate of 70 percent. The decrease comes during an academic year which saw several controversial tenure denials, such as the University’s decision to deny tenure to Romance Languages and Literatures associate professor Lorgia García Peña, whose research engages with race and ethnicity.

Half of female faculty who went up for internal promotion in 2019-20 succeeded, compared to 80 percent in 2018-19. This year’s figures were too small to report racial and ethnic data on tenure cases, the report said.

The report notes that in order to increase the number of Black, Hispanic, Native American, and multiracial faculty, the FAS must “work harder to attract the broadest possible tenure-track faculty applicant pools.” While 16.2 percent of domestic Ph.D. recipients identified as members of those groups in 2018, just 6.5 percent of applicants to Harvard’s tenure-track positions between 2013 and 2019 identified in those groups.

Dean for Faculty Affairs and Planning Nina Zipser said during the meeting that the divergence resulted from the FAS’s current “passive” policy towards recruitment, which she said is sometimes limited to putting up an application and assuming applicants will be attracted by the Harvard name. More proactive outreach will help diversify the applicant pool, Zipser said.

Also during Tuesday’s faculty meeting, University Provost Alan M. Garber ’76 announced that University administrators will convene a town hall to discuss the ad hoc committee step of Harvard’s tenure review process. The use of ad hoc committees has been one of the most contentious steps in the process — critics have called them a “black box” that could disadvantage women and faculty of color — but are not being examined during the FAS’s current tenure procedures review because they are under the University's purview.

Garber said he and University President Lawrence S. Bacow hoped a town hall would “demystify” the ad hoc committee and give faculty a “more complete picture” of the process.